Misery for Lily James as new Netflix film Rebecca is savaged as ‘hollow, and turgid’ with a ‘lifeless’ cast on its release – days after THOSE Dominic West photos set the internet alight

It has been quite the week for Lily James after she was caught canoodling with co-star Dominic West in photos that set the internet alight.

The actress, 31, best known for Cinderella and Downton Abbey, has kept a low-profile and has pulled out of a string of publicity appearances to promote her latest film, Rebecca, which is released on Netflix today.

But unfortunately there is nothing that can shield the star from the watchful eye of film critics who have savaged the latest adaptation of Daphne du Maurier’s 1938 novel in almost unanimously unflattering reviews.

Leading man Armie Hammer and director Ben Wheatley come in for the most criticism, with the actor described as ‘boring’ and ‘blunt’ in his role as the wealthy, sinister widower Maxim de Winter.

Meanwhile James is called out for her ‘flat charm’ and limited range as his unnamed second wife. Kristen Scott Thomas, who plays housekeeper Mrs Danvers, emerges as the sole ‘bright spot’ for many, but even her ‘imperious’ performance isn’t enough to redeem the film.

The New York Times’ A.O. Scott puts it simply: ‘To call this “Rebecca” an update would be misleading. It’s just a mistake.’

Here, a look at what critics on both sides of the Atlantic had to say… 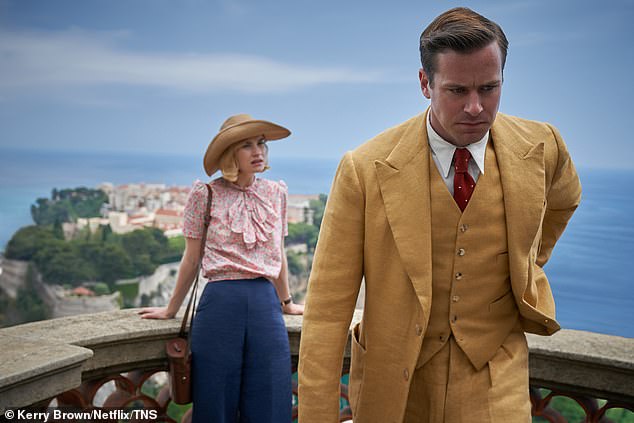 Underwhelming: Armie Hammer (Man from U.N.C.L.E. and Call Me By Your Name), plays Maxim de Winter, the dashing aristocrat who killed his first wife and marries his second, Lily James’ unnamed character, after meeting her in Monte Carlo. Pictured, with James in the film

The critics deliver their verdicts

The Daily Mail: This is a stylish and generally irreproachable telling of the story, cleaving closer to the novel than Hitchcock’s version did.

The Daily Telegraph: ‘There’s no contradiction in believing that a fresh and daring retelling of Rebecca was entirely possible with this exact cast and crew, but the fruit of their labours isn’t it. ‘

The Guardian: ‘It’s not an obvious meeting of material and film-maker, but Ben Wheatley’s Netflix-produced adaptation of Daphne du Maurier’s Rebecca is a perfectly watchable romp that bounces along like a cheerful labrador.’

The Times: ‘What we have instead is what the French director François Truffaut used to call “le cinéma de papa” — a passionless, vacuous, low-level exercise in cringeworthy mediocrity.’

Vanity Fair: ‘You can’t just throw trendy actors of the day into a classic and figure that enough. Didn’t we learn that fairly recently with the Great Gatsby? These grand old houses of literature need more care than that. Rearrange the furniture all you want, but do be sure to use it well.

Slate: Glossy, handsomely mounted, with ample footage of mist-swathed Cornish cliffs, this adaptation is all still waters and no depth.

Vulture: This is all, of course, the result of ill-equipped filmmakers, who mistook the source material and original adaptation as mere IP to be rebooted, an algorithmic model to be fulfilled, rather than an artful tale of delicious, sexual hunger.’

The New York Times: ‘To call this “Rebecca” an update would be misleading. It’s just a mistake.’

Armie Hammer (Man from U.N.C.L.E. and Call Me By Your Name), plays Maxim de Winter, the dashing aristocrat who killed his first wife and marries his second, Lily James’ unnamed character, after meeting her in Monte Carlo.

However the strapping actor failed to impress the vast majority of critics with his performance. Many noted how it pales in comparison to Sir Laurence Olivier’s star turn in Alfred Hitchcock’s 1940 remake, which won the Best Picture Academy Award.

‘Gone is the Byronic hero flair that Laurence Olivier brought to the part, replaced by something empty and blunt,’ wrote Angelica Jade Bastien of Vulture. ‘When called to express Maxim’s volcanic anger, Hammer can barely muster a flame.’

Kevin Maher of The Times was among those who noted Hammer is simply too young to play Maxim de Winter.

In the novel the reader is led to believe Maxim is 42 while his new wife is 20. In the BBC adaptation the characters were played by Emilia Fox and Charles Dance, who have a 28-year age gap.

However Rebecca stars James, 31, and Hammer, 34, who are just three years apart.

Noting the effect of this, Maher writes: ‘The story’s creepy paternal dynamic (Du Maurier’s Maxim announces that “a husband is not so very different from a father”) is replaced by gooey, sepia-tinged, Mills & Boon romance and lots of pointless snogging.’

Laura Miller of Slate agreed: ‘He is far too callow and young—less than three years older than James—to suggest a tragic past.’

She added the actor appears ‘lost in the role’ and that it brings his limitations ‘as an actor, screen presence, and potential star into a harsh spotlight’.

Richard Lawson of Vanity Fair had a similarly unflattering assessment, writing: ‘With Wheatley’s abetment, Hammer doesn’t project even a scintilla of the shadowy, chilly allure befitting Maxim’s surname. He’s a hunk playing sad for a second, incapable of holding a secret.’

The Guardian’s Wendy Ide agreed he was perhaps ‘too sunny’ for the role.

However the star was ‘dashing’ and ‘preppy’ enough to impress some critics, with the Daily Mail’s Brian Viner writing: ‘Armie Hammer is jolly good as rich, dashing, screwed-up Maxim de Winter, looking in his finery very much to the manor born (as indeed he is, being the great-grandson of oil tycoon Armand Hammer).’

… ON LILY JAMES AS THE SECOND MRS de WINTER

Vanity Fair said of the actress’ performance: ‘James, however, is all flat charm, poised and reactive but never deep. In that way, she’s a perfect complement to Hammer’s bland solidity. They’re a terrible fit for Rebecca, though.’

The Times wrote: ‘James fares slightly better than she did in her non-role from Yesterday, but Mrs de Winter is a monumentally passive character — she watches, she whines, she whimpers, she faints — and the Mamma Mia! star can only deliver so many aghast expressions before her range begins to appear limited.’ 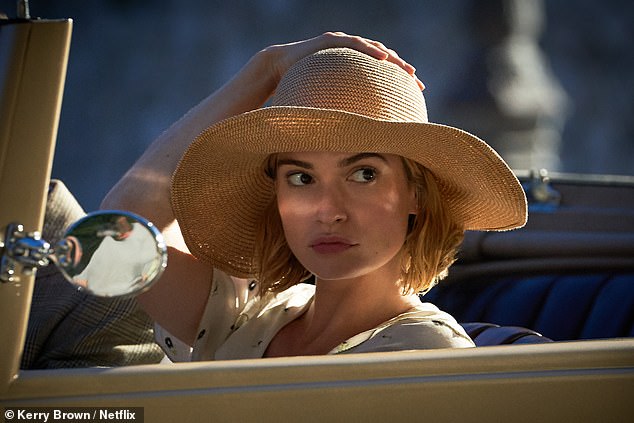 Limited range: Lily James failed to impress many as the unnamed second Mrs de Winter. However others said she had a ‘very modern mix of vulnerability and mettle’

Vulture added: ‘James’s performance as Mrs. de Winter doesn’t elicit the sympathy necessary, either. She hunches her shoulders, possessing the flighty physical expressions of a wounded sparrow. There’s nothing going on behind her eyes — no complication, no lust, no hunger, no touching naïveté that grows into a surer sense of self.’

However James impressed some critics, with the Daily Telegraph writing: ‘The actress’s very modern mix of vulnerability and mettle brings a sexual frisson not only to her relationship with Hammer’s Maxim, but 1930s Cornwall full stop.’

The Daily Mail’s Viner argues James does a ‘fine job’ in the role.

… ON THE SEX SCENES THAT FAIL TO SIZZLE 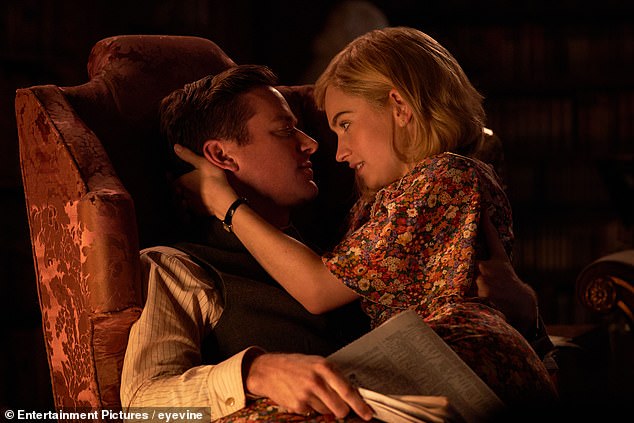 Unconvincing: One critic said there was no chemistry between Hammer and James

The film diverges from du Maurier’s novel and shows Maxim and his unnamed lover romping in the sand before leaving to Manderley.

Behind-the-scenes photos showed James and Hammer on the sand together as they filmed on location. But the chemistry between the characters was not convincing enough for some critics.

‘Indicative of their lack of chemistry is an early “sex” scene that takes place on the shore of a beach, a moment meant to be blissfully romantic yet, somehow, the cinematography makes Monte Carlo feel unappealing,’ wrote Vulture’s Bastien.

‘I put “sex” in quotation marks because there’s no heat or sensuality to be found there. ‘ 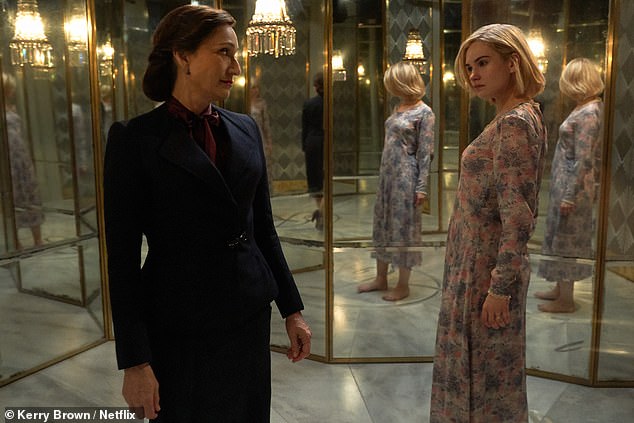 Just as they were almost united in their dislike for the film as a whole, so too were the critics full of admiration for Kristin Scott Thomas as Manderley’s housekeeper, Mrs Danvers.

At least it looks good!

Another bright spot in the eyes of many critics was the costume, cinematography and production design.

Wendy Ide for the Guardian wrote: ‘The production design is glorious – particularly Rebecca’s sumptuous eau de nil boudoir, its aqueous colour palette hinting at the fate of the first Mrs de Winter even as sense memory of her presence lingers in every room.’

Meanwhile The Sunday Times compared it to a perfume advert, writing: ‘Gorgeously shot on the south coasts of France and England, and sumptuously costumed by Julian Day, this Du Maurier is so lavishly mounted, you half expect a whispered voiceover to drift over the final shots of Manderley in flames: “Eau de Ex. Spooky. Beautiful. Unforgettable.’

Indeed The Sunday Times’ Tom Shone went so far as to say her performance was ‘easily the best reason to see this new Rebecca’ while Vulture described the actress as the ‘one actorly bright spot in the film’.

Scott Thomas was also the standout for the Daily Mail’s Brian Viner, who wrote: ‘Above all, I liked the way Scott Thomas makes Manderley’s housekeeper more human than we are used to seeing her.

‘She is far from sympathetic but, beneath the icy demeanour, not so much boilingly psychotic as a psychological mess. It’s a distinctly modern interpretation, yet it does nothing to diminish the character’s stature as one of the screen’s great scene-stealers. That is what Mrs Danvers has been for 80 years, and I’m happy to say that the wonderful Scott Thomas upholds the tradition.’

Praising the actress in an otherwise scathing review, A.O. Scott for the New York Times wrote: ‘Mrs. Danvers (Kristin Scott Thomas), who terrifies her new boss and is the only interesting person in the movie, with the possible exception of the invisible title character. The movie fails to live up to either of them, or to Thomas’s seething, dignified performance.’

However even highly regarded Scott Thomas fell short for some, with Slate’s film critic noting she failed to bring the ‘same intensity’ as Judith Anderson in Hitchcock’s version.

Meanwhile Vanity Fair’s Richard Lawson was left underwhelmed, saying: ‘Under Wheatley’s guidance, she strenuously resists melodrama and instead goes for a pathos that feels awfully misplaced in this shallow read of the material.’