Coming to a (rear) end! Women vying for the title of Miss BumBum – including the competition’s first transgender contestants – show off their derrières in high-cut swimsuits ahead of the last ever pageant

For the final year of Brazil’s infamous Miss BumBum competition, contestants are proudly showing off their derrières in high-cut bathing suits six months ahead of the pageant.

The controversial contest, which aims to find the best booty in the country, is coming to an end this November after eight years and more than 200 booty-shaking participants.

‘Diversity’ is the theme of the last ever Miss BumBum competition, and, for the first time ever, two transgender women are among this year’s 27 contestants. 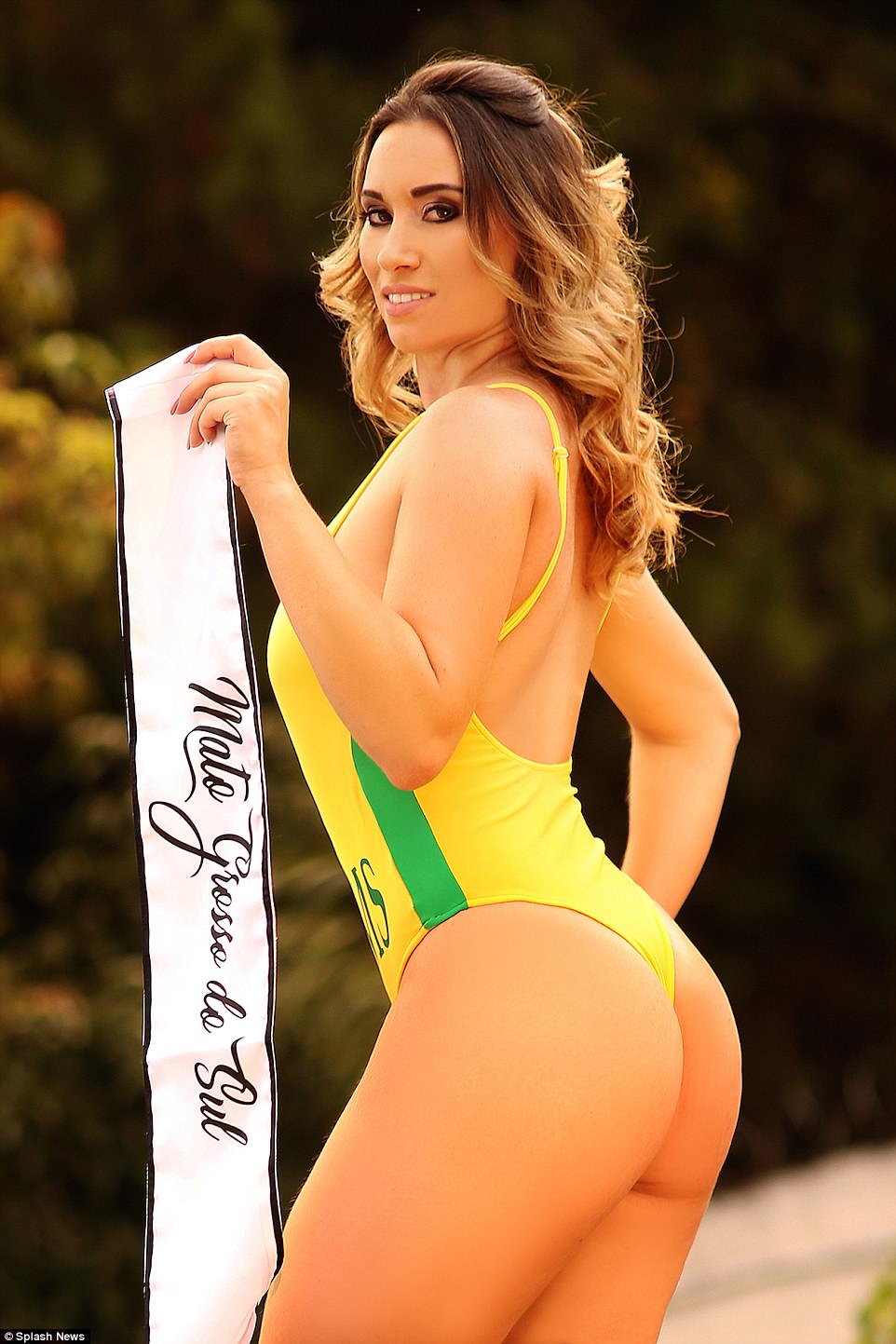 Strike a pose: Contestants of Brazil’s final Miss BumBum competition have posed in swimsuits ahead of the pageant. Rafaela Oliveira, 24, from Mato Grosso, has a 41 inch backside

Diversity: Paula Oliveira (L) , 27, and Giovanna Spinelli (R), 28, are the pageant’s first ever transgender contestants. While Paula boasts a 46-inch derrière, Giovanna has a 39-inch bum

Next step: This year’s 20 Miss BumBum contestants will be be whittled down to 15 finalists, who will go on to compete at the grand finale in Sao Paulo on November 5

Strike a pose: Juliana Oliveira (L), 27, proudly showed off her 41-inch butt during the shoot, while Cida Alves (R), 28, kept her 40-inch bottom turned away from the camera

‘I feel privileged to have been able to realize my dream and take part in a beauty contest,’ Giovanna Spinelli said of competing in the contest as a transgender woman.

Giovanna, 28, will be joining fellow transgender contestant Paula Oliveira, 27, in the competition, which started in 2011 and quickly gained international recognition.

This year’s Miss BumBum contest is being launched to coincide with the 2018 FIFA World Cup that istaking place in Russia this summer.

With the World Cup less than two months away, the women struck a pose in yellow and green soccer-themed swimsuits for a shoot six months ahead of the contest.

Online voting begins on August 6, and competition is fierce as only 15 of the buxom beauties will be allowed to take part in the final. 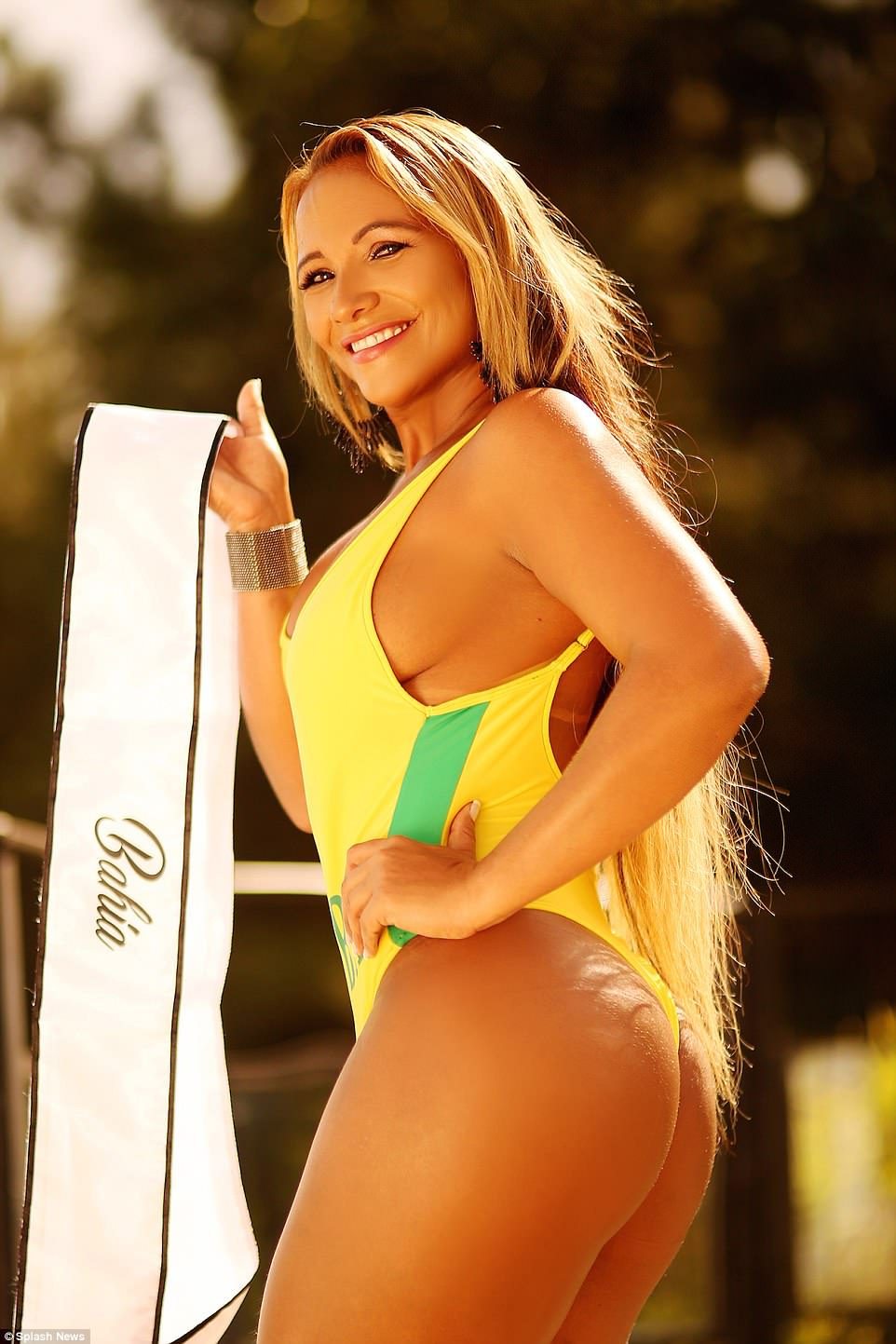 Last one: The contest, which aims to find the best booty in the country, is coming to an end this November after eight years. Lady Oliveira, 20, will be showing off her 40-inch booty in the contest in hopes of being named the winner 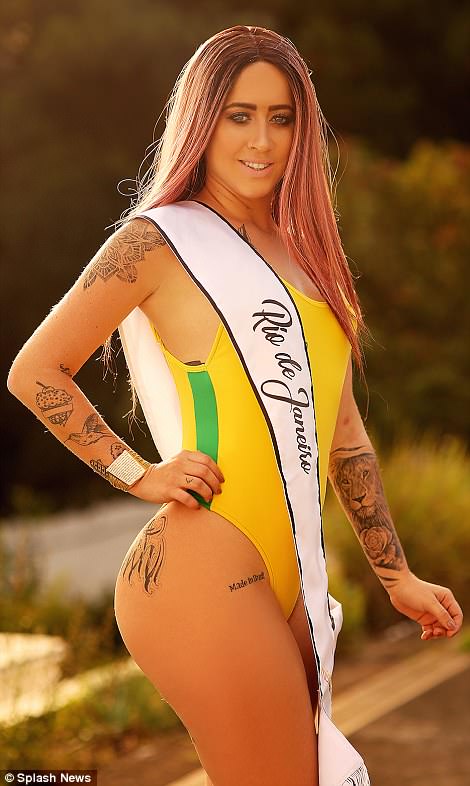 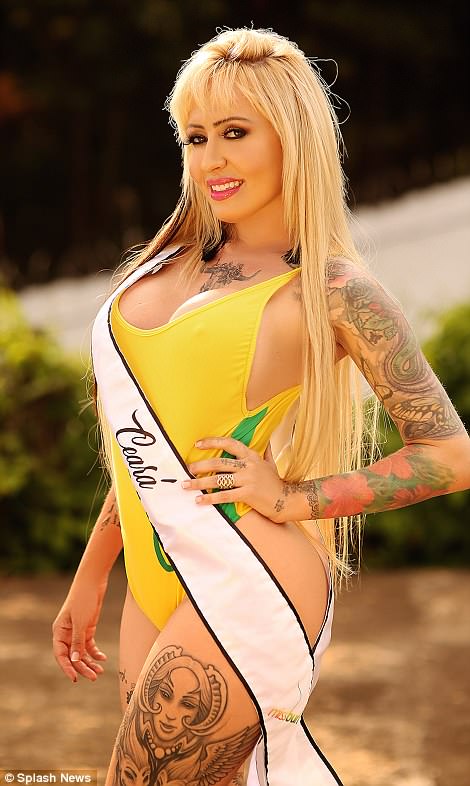 Fierce competition: Tamires Aaron (L), 21, will be representing Rio de Janeiro with her 43-inch bum, while  Luciane Schneider (R), 33, from Ceará, has a 41-inch derrière 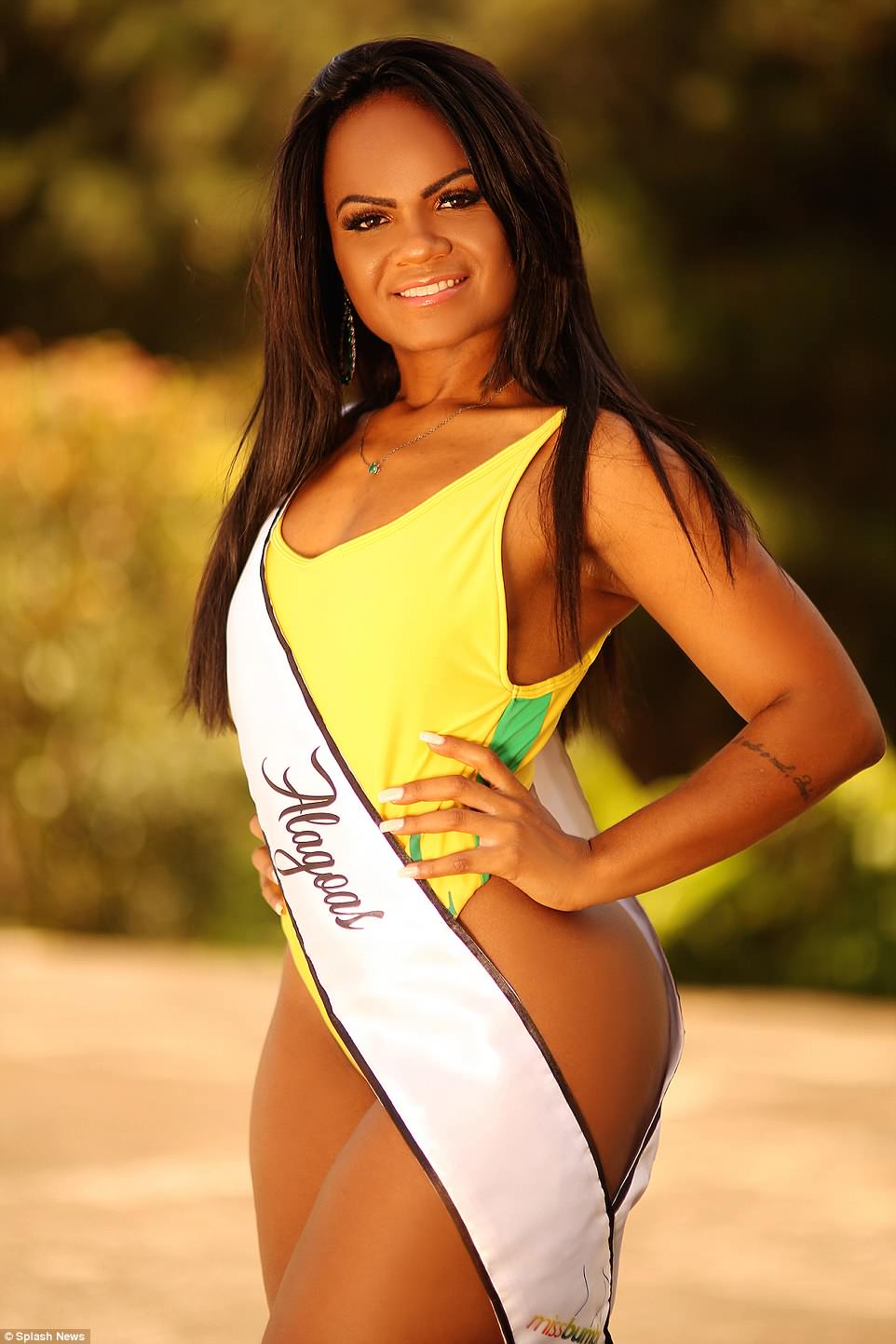 This year’s Miss BumBum contest is being launched to coincide with the 2018 FIFA World Cup that istaking place in Russia this summer. Carol Lisboa, 24, will be representing Alagoas with her 42-inch bum

A team of expert judges will then choose a winner during the grand finale in Sao Paulo on November 5.

Last year’s Miss BumBum contest aimed to be ‘more elegant’ than the last — with bottoms larger than 42 inches being banned from the contest.

That would have excluded Kim Kardashian’s 43-inch backside, if she had wanted to enter.

Cacau Oliver, the creator of the Miss Bumbum pageant, believes it is a national concern that so many Brazilian women are desperate to emulate the reality star’s famous backside.

‘I would ask them to be patriotic and instead of trying to copy an American butt, strive to preserve the image of Brazil around the world,’ Oliver told the media last month, according to El Universal. 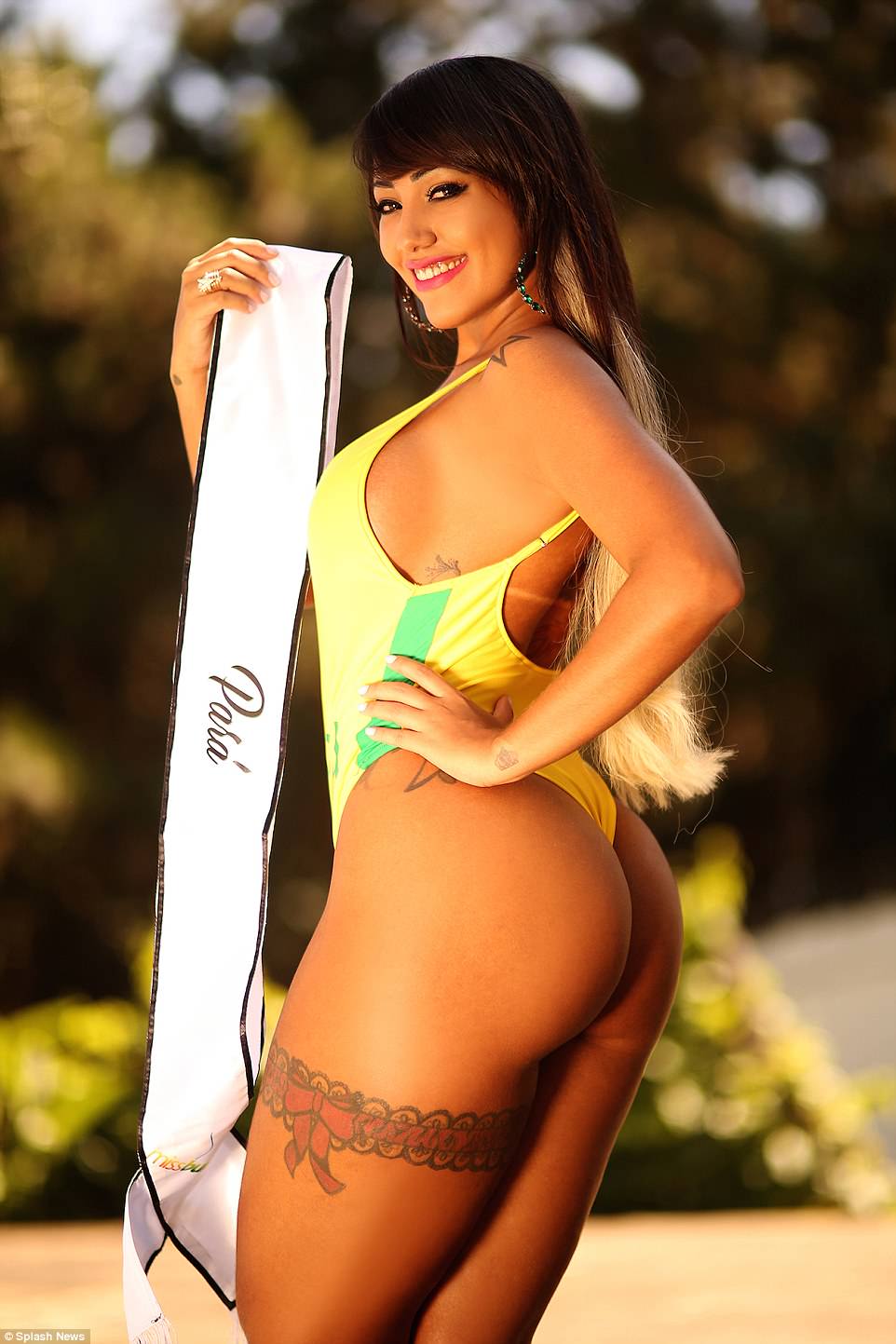 All smiles: Grazielly Costa, 22, from Para, proudly flaunted her 43-inch bum during the photo shoot 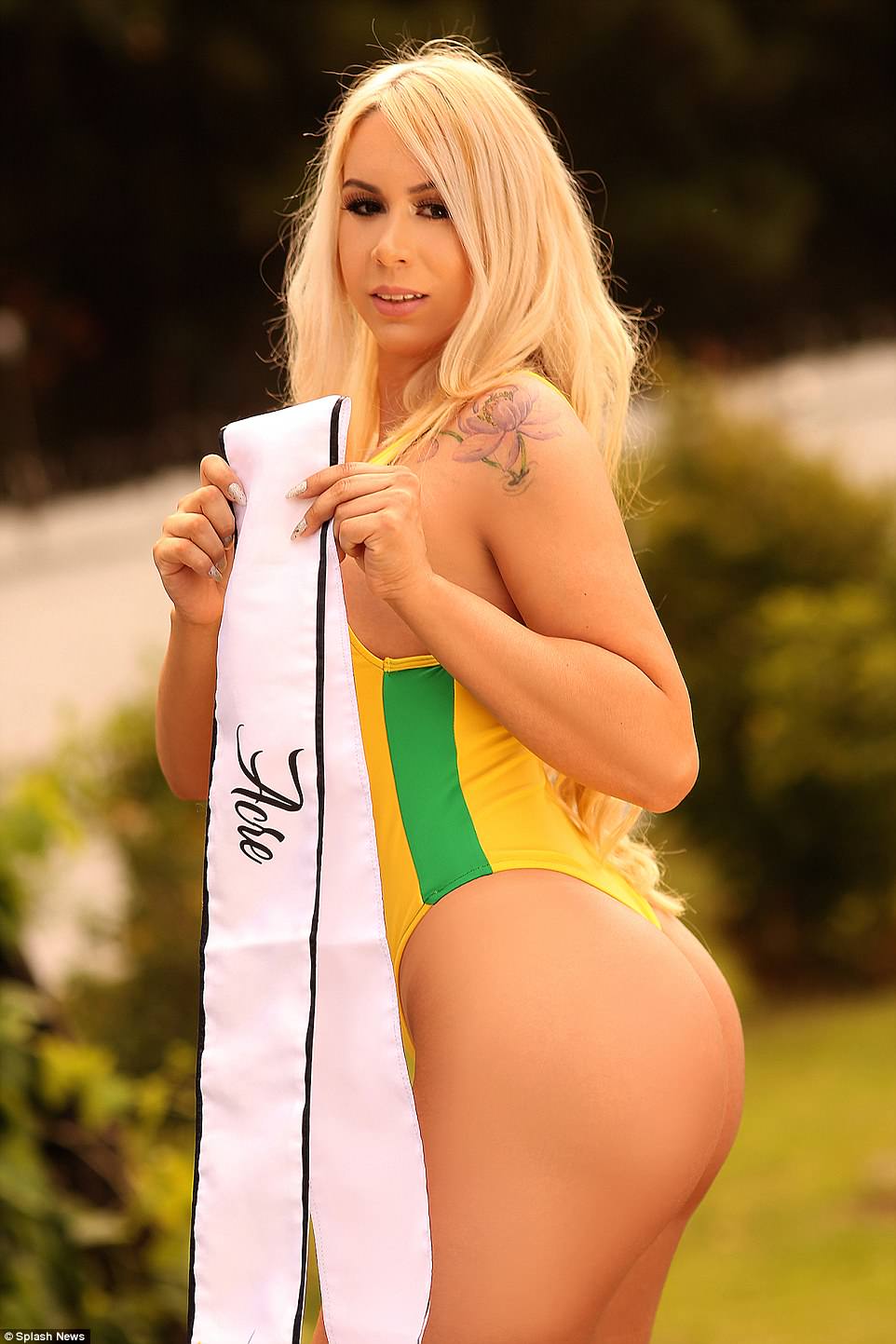 Dreams: Arry Mucin, 24, hopes to take home the grand prize and be named Miss Bumbum with her 40-inch bottom 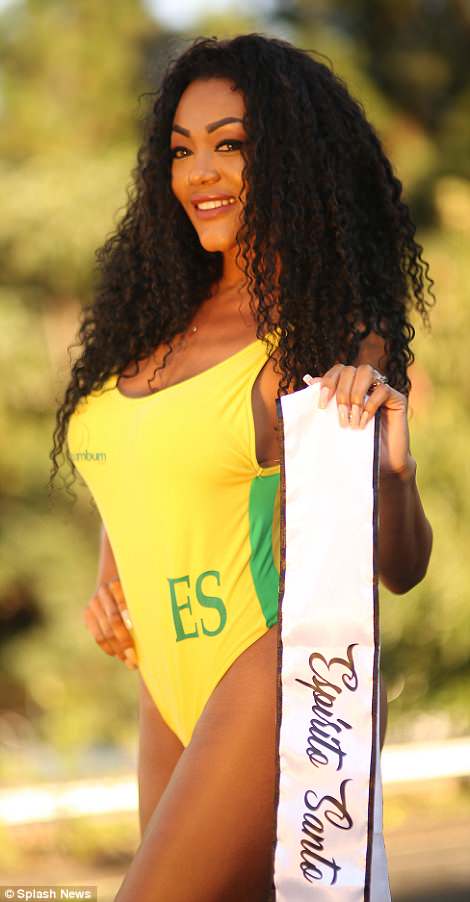 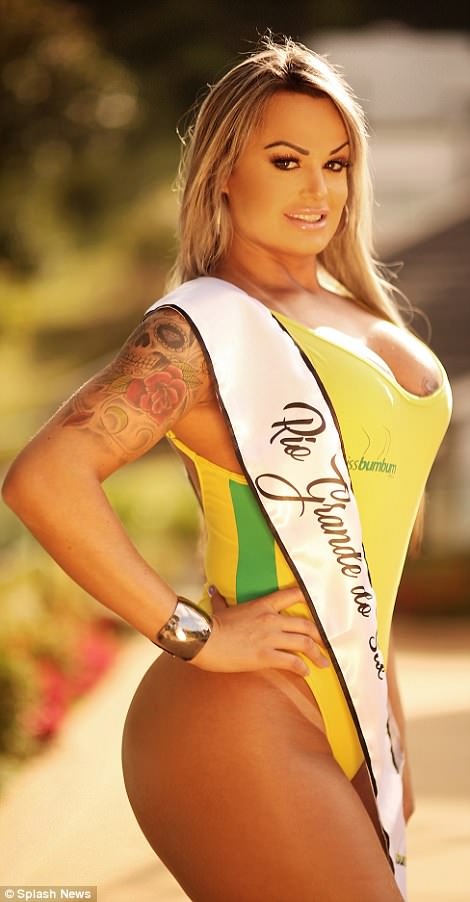 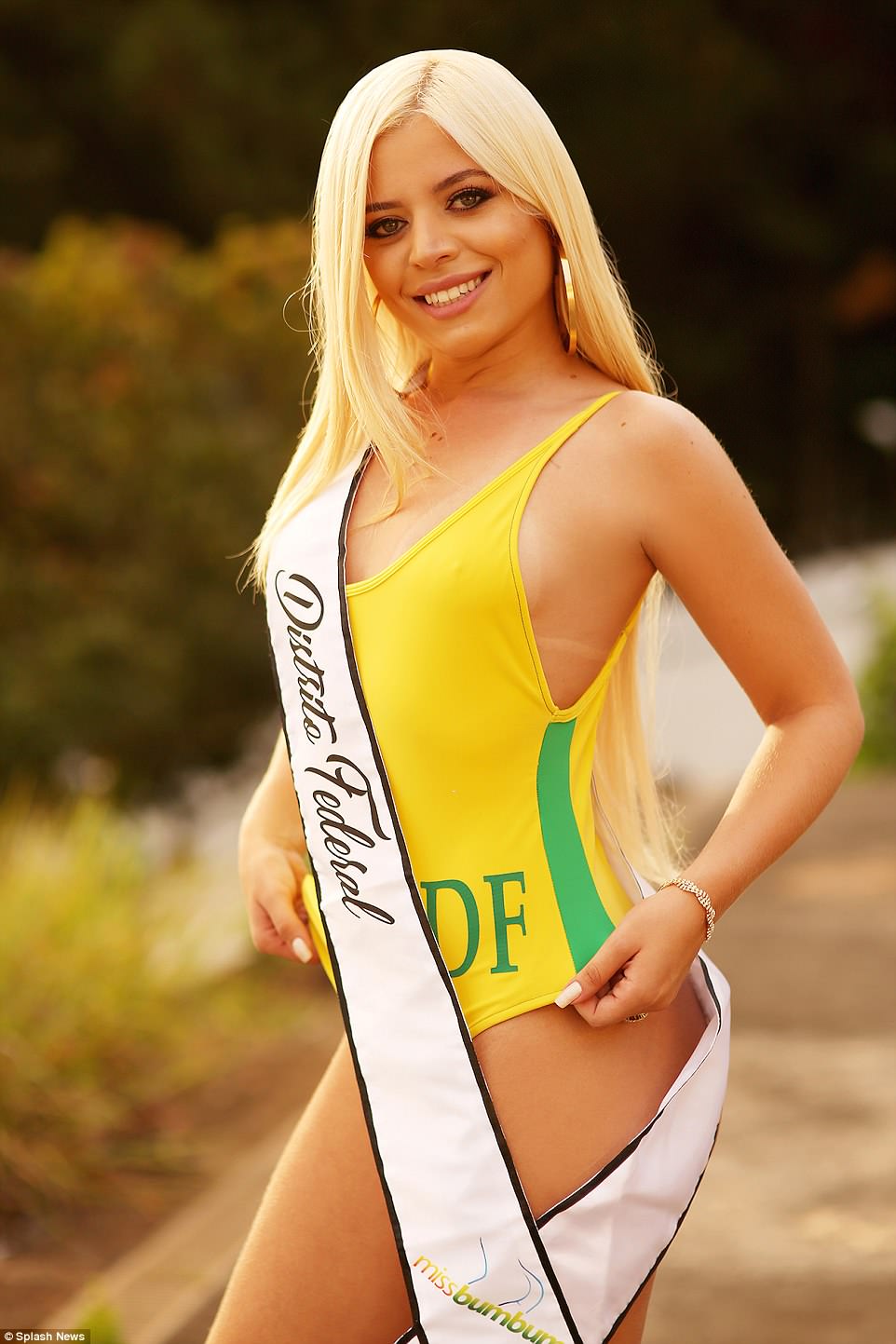 Motivation: Winners of the hotly-disputed contest become overnight celebrities and often go on to earn millions in modeling contracts and endorsements. Flavia Tamaio, 20, from Federal District, hope her 43-inch bottom will earn her votes 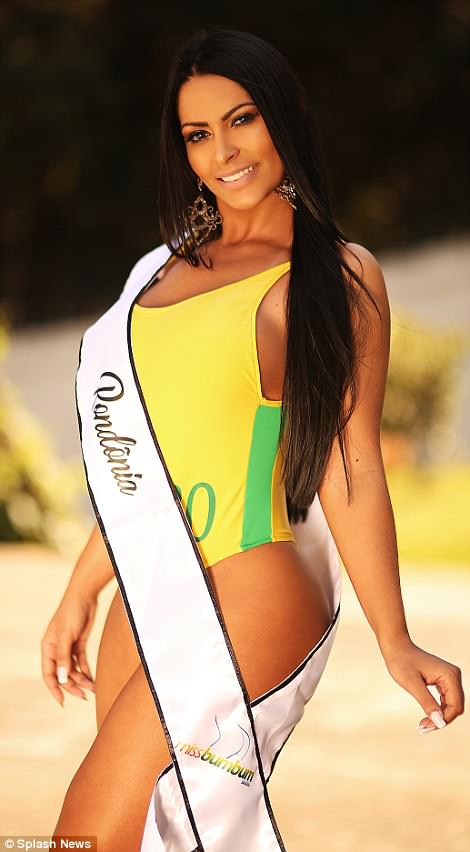 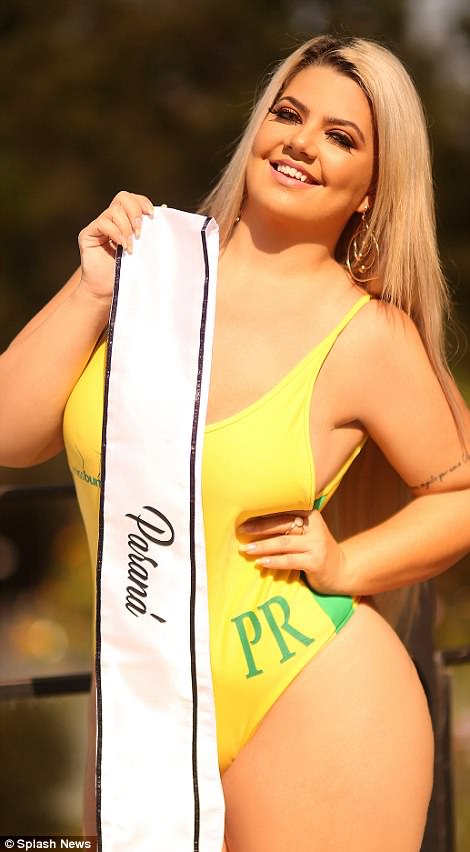 ‘Unfortunately, the bottom of Kim Kardashian has redefined the parameters in the BumBum nation,’ he said, adding that in recent years he has seen how the ‘Kim effect’ has changed what woman consider a beautiful body, particularly in regards to their backsides.

However, the ban on over-the-top bottoms appear to be lifted, as some of this year’s contestants boast backsides that are 42 inches are larger. But some of last year’s changes have remained.

Instead of G-strings and thongs, provocative lingerie, and deliberate attempts to cause controversy — such as a raunchy photo shoot when contestants reenacted The Last Supper  in 2016 — official shoots now show contestants in full-body swimsuits.

In a country obsessed with the female backside, winners of the hotly-disputed contest become overnight celebrities and often go on to earn millions in modeling contracts and endorsements.

Rosie Oliveira, Erika Canela, Suzy Cortez, and Indianara Carvalho are among the previous winners who have acquired international fame after taking home the top prize at the competition. 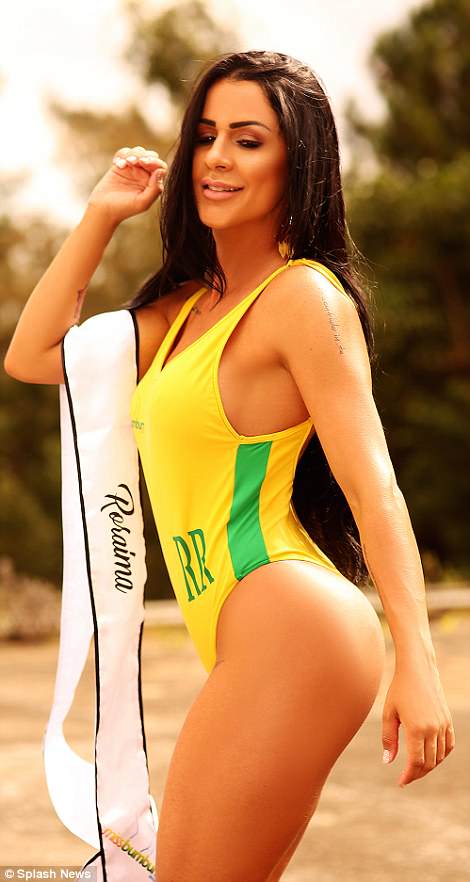 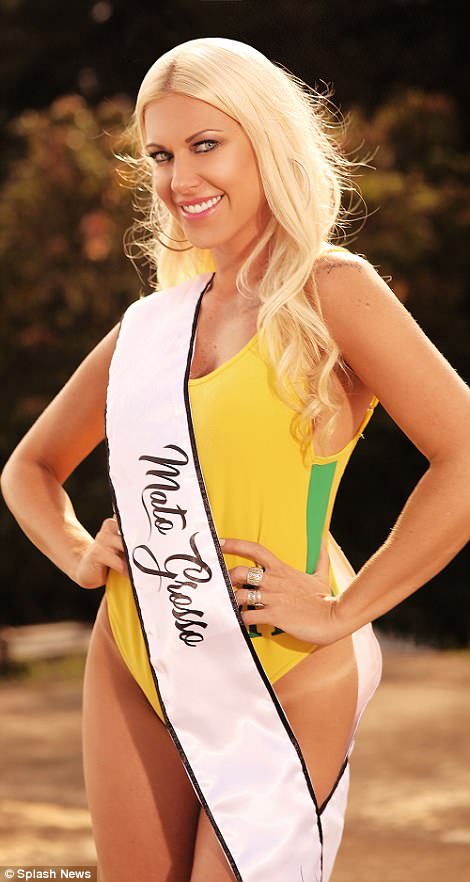 In it to win it: Cinthia Gomes (L), a 28-year-old secretary from Roraima, has a 39-inch butt, while Antonela Avellaneda (R), 35, from Mato Grosso, has a more petite 37-inch backside 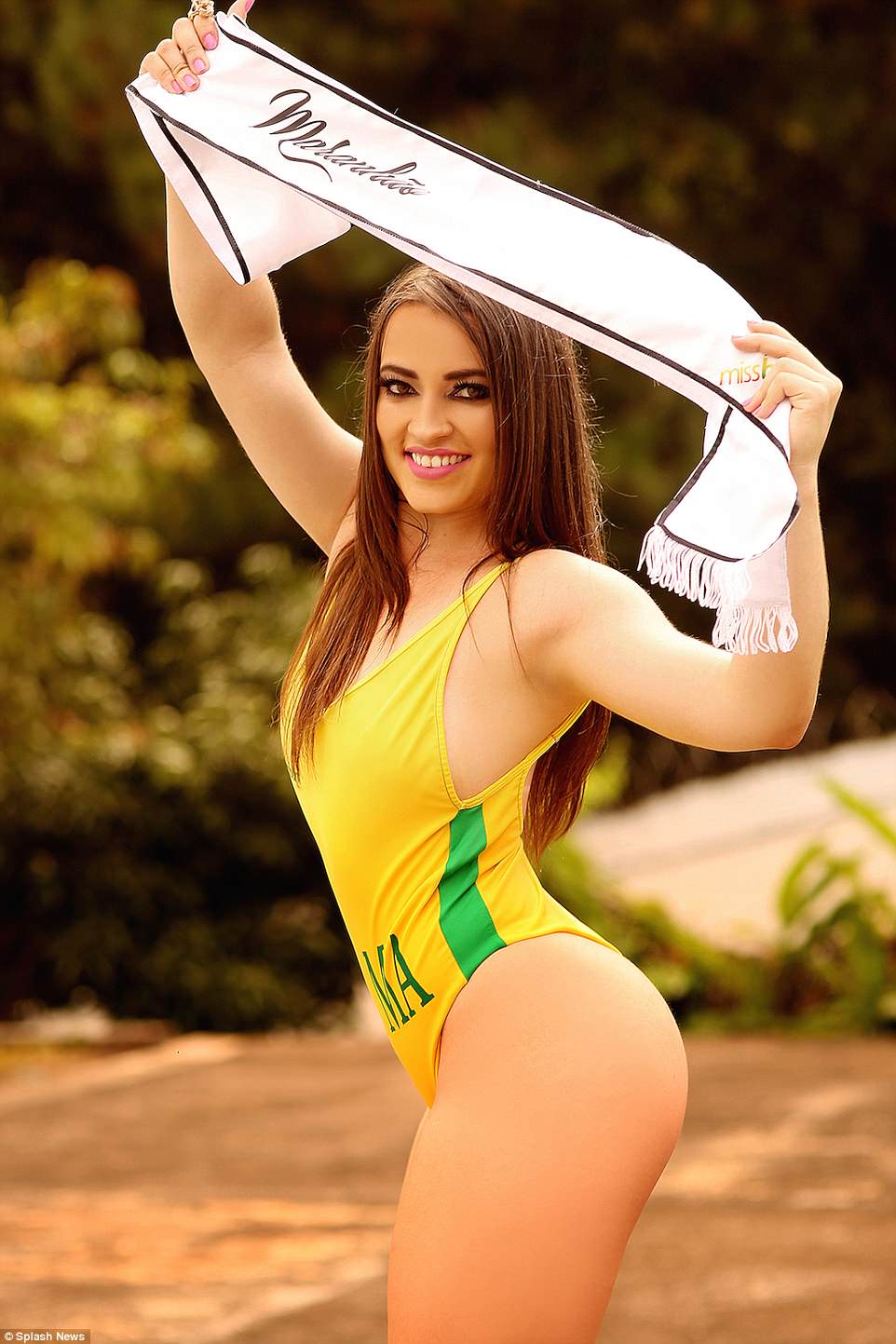 Show off: Valeria Freitas, a 26-year-old from Maranhão, held her banner above her had while flaunting her 40-inch bum during the shoot 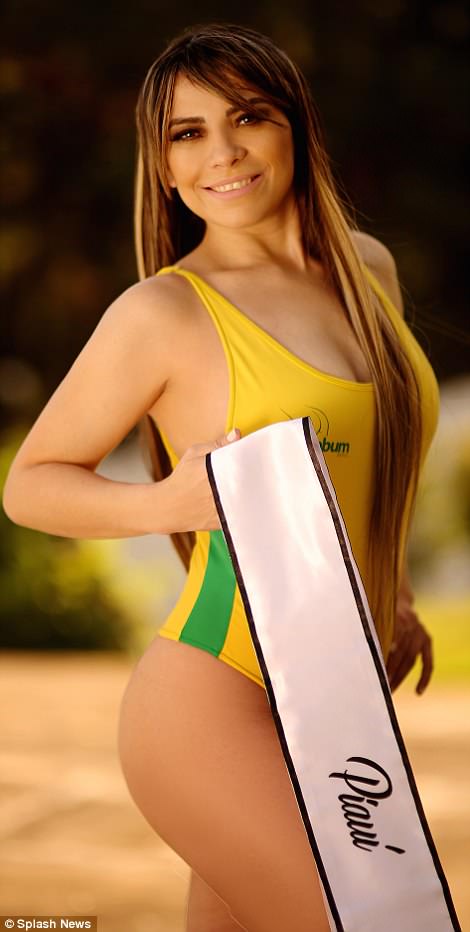 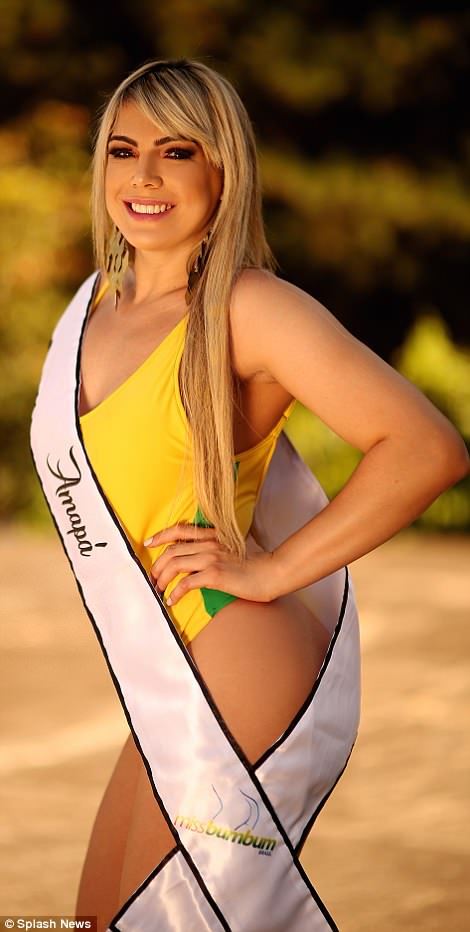 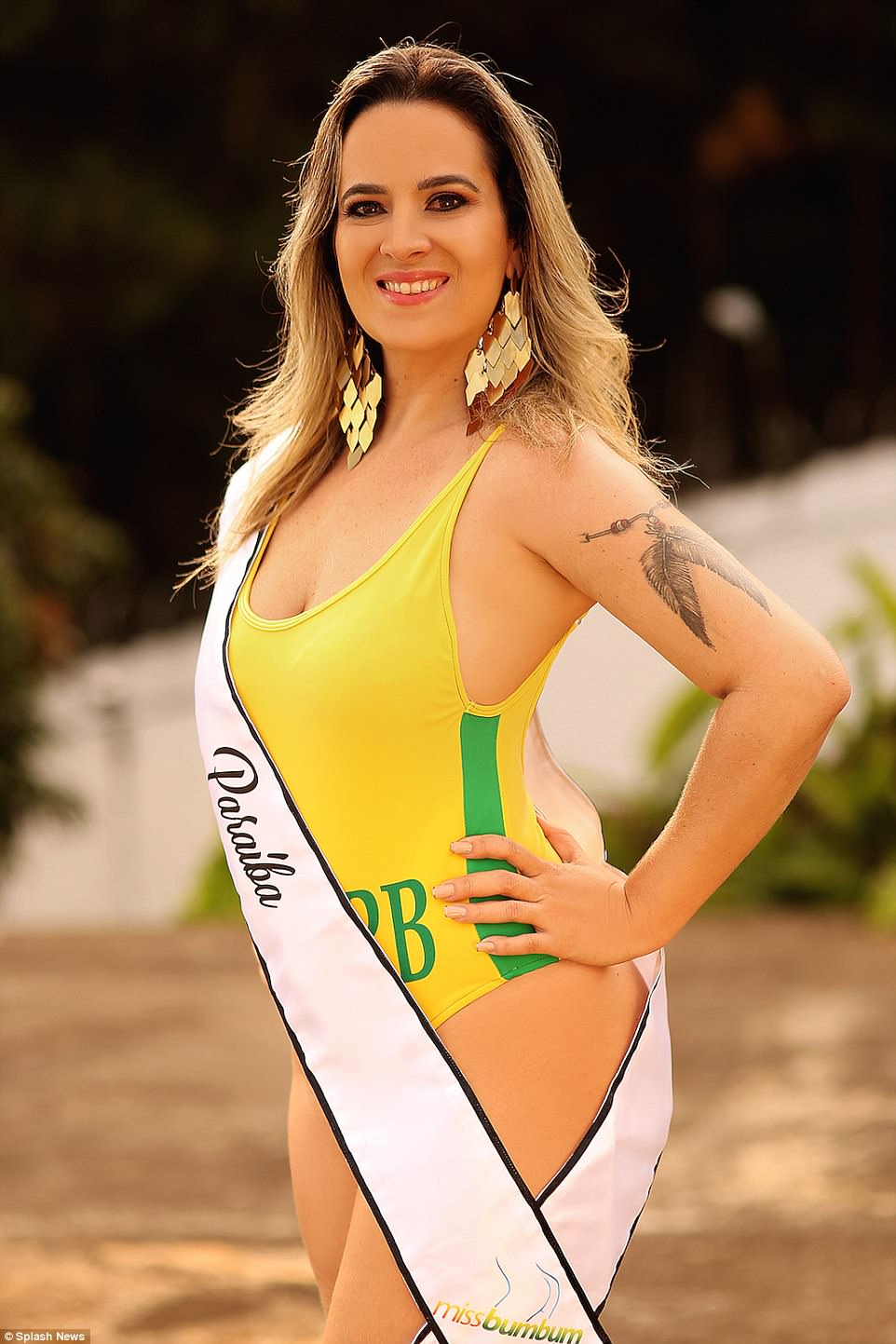 Model move: Suelen Nobrega, a 34-year-old from Paraíba, proudly posed with her hands on her hips while showing off her 42-inch backside

Meanwhile, 2014 Miss Bumbum runner up Cláudia Alende has amassed more than 10.1 million Instagram followers thanks to her uncanny resemblance to actress Megan Fox.

However, despite its international success, the competition has been steeped in controversy with multiple allegations of cheating and even bribery.

Last year, six of the 15 finalists — including winner Rosie Oliveira — were accused of cheating by using robots to cast votes.

Organizers confirmed that they were docked 40,000 votes each ‘for the use of or attempted use of robots to interfere with the public vote,’ but Rosie, a fan favorite, went on to take home the title.

In 2014, Miss BumBum contestants Mari Sousa and Eliana Amaral were accused of bribing judges in their attempts to come in first and second place, but Indianara Carvalho was ultimately named the winner that year.

Despite the controversies, interest in the competition seems to be higher than ever.

Oliver has marked the final year of the contest by releasing a new book called Make Celebrities, which is all about the Miss BumBum pageant and how he creates stars.