When ecologist Doug Mills started out trying to tally threatened Australian microbats as they streamed out of their caves, traditional methods of tag and recapture or physical counts were tedious, expensive and carried a mistake rate approaching one third.

That error range made tracking the fate of species such as the large bentwing bat particularly difficult. The microbat, large only in relation to the even tinier little bentwing variety, weighs only about 13-14 grams, and is already listed as vulnerable in NSW. 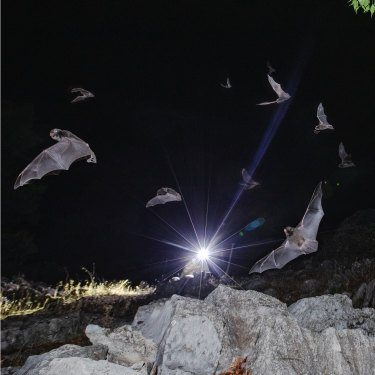 The application of advanced monitoring technology is enabling scientists to keep a better track of how the threatened tiny microbat populations are faring.Credit:NSW Environment Department

Dr Mills, though, learned that US counterparts had started to adopt software and thermal imagery technology derived from tracking missiles and developed in the US Army Environmental Laboratories to monitor threatened species such as bats. In 2008, he started applying it in Australia with the large bentwing bat as his target.

“I’m pretty sure I’m the first in Australia to use [this technology],” he said. “It’s made a huge difference…I sit there in complete darkness and the bats are hardly aware that I’m there.”

“If you can’t tease out these year-to-year changes, it hard to attribute [any population shifts] that are happening in the environment.

Large bentwing bats – so named because long bone in their third finger gives it a “bent wing” appearance – are found along Australia’s eastern seaboard, from Cape York in the north to a region around Castlemaine, north-west of Melbourne. Some debate over the mammals’ varieties – Australia has more than 60 microbat species – has meant they may not be getting the national protection they deserve, Dr Mills said.

The vulnerability of the large bentwing bat comes down to their unusual nursery habits and the fact they may be Australia’s only migratory microbat species. After mating, the females leave their males behind and congregate in their thousands in certain caves to give birth.

In NSW, the caves are located at Wee Jasper in the Goodradigbee Valley near Canberra, Bungonia near Goulburn, and a third region near Kempsey in the state’s north. 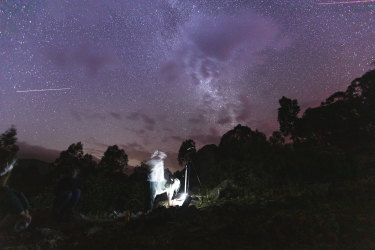 New technology derived from the missile industry is aimed at improving the chances of survival of the bent-winged bats. Credit:NSW Environment Department

Dr Mills said the decade-plus period is too short to say for sure the microbats are holding their own against the multiple threats. While the three sites can have in the order of 20,000 individuals each year, there is some drop off during years of drought when the insects they feed on are harder to find.

“They can eat their own body weight in insects in one night,” he said, adding that they need to consume vast amounts to meet their metabolism demands including a heart rate nudging 1000 beats per minute. Individuals have also been known to fly 50 kilometres or more to forage.

The research is funded jointly by the NSW Parks and Wildlife Service and the government’s Saving Our Species program, which is due for review by the end of this fiscal year.

“This is really a fantastic project, funding and investing in science and cutting edge research is exactly what the NSW government should be doing,” Environment Minister Matt Kean, said.

“We need to pull out all stops to help threatened species like the bentwing bat and through this creative use of technologies we are going to get a much better understanding of how these little guys live,” he said. 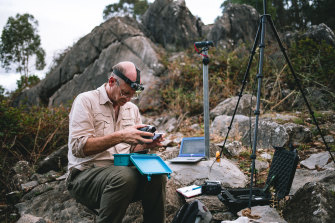 Researchers, led by Doug Mills of the NSW Parks and Wildlife Service, are using the missile tracking technology near the three main cave areas in the state used by the microbats as maternity sites.Credit:NSW Environment Department

Dr Mills said the technology may be applicable to tracking other species but it favours those gathering in one place without too other many objects in motion.

Efforts, for instance, to monitor flying foxes in Sydney’s Royal Botanic Garden, failed because of the many places the bats flew and the distorting signals sent from the movement of cars and boats nearby.