NSW Police are seeking urgent legal advice about whether a private limousine driver at the centre of the Bondi COVID cluster breached health orders by not wearing a mask.

Police Commissioner Mick Fuller on Friday morning said he was seeking external advice about whether the man could face charges, because of the gravity of the outbreak which has now jumped borders and infected two people in Melbourne. 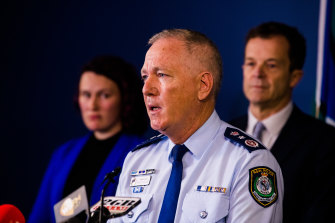 NSW Police Commissioner Mick Fuller on Tuesday said a complaint had been referred to the police watchdog.Credit:James Brickwood

“I’ve received mixed messages in terms of whether or not he has breached the health order, so we have sent it out for urgent legal advice now,” Commissioner Fuller told 2GB. (2GB is owned by Nine, the publisher of this masthead.)

“Why have we done that? I think [with] the significance of this outbreak and the community concern, I just need to tick every box, I suppose, in terms of making sure whether he has or hasn’t definitively breached the health order.”

There have been 48 local cases since an eastern suburbs driver employed to transport international aircrews from a freight plane between Sydney Airport and their Mascot hotel quarantine accommodation tested positive last week.

It sparked an ongoing police investigation into the man’s conduct, including whether he was vaccinated and whether he adhered to daily testing requirements in the public health order relating to his work.

Police are also examining the oversight of private drivers contracted to work within the quarantine system and transporting cargo.

“The reality is that we’re seeing up to nearly 40 cargo planes landing a day, but when you take this limousine driver, you have to say that there’s a fair bit of public outrage about it and the Premier is certainly disappointed,” Commissioner Fuller said.

“It’s still a police operation we are running, so we need to take responsibility for the victories and the failures at the same time.”

Deputy Commissioner Gary Worboys on Thursday said police had issued 150 cautions to people in Sydney and surrounds for not wearing masks since rules were introduced last week. Masks are required in all indoor non-residential settings, including workplaces and gym classes.

Commissioner Fuller on Friday said police had taken a fair approach to issuing fines throughout the pandemic but that he had asked officers to “ramp it up” in light of the growing outbreak.

“In the last 20 hours we’ve issued seven tickets for people not wearing masks, and the amount of cautions has dropped dramatically,” he said.

“Highway patrol will be patrolling the outskirts of that Greater Sydney area and if you are outside of that, then you’ll be given a ticket up to $11,000 If you go to court and there’s $50,000 fines for corporations.”

Premier Gladys Berejiklian on Thursday said NSW was facing its scariest period of the pandemic so far, as health officials worked to unravel four mystery cases.

Fragments of the virus that causes COVID-19 have been detected at the Bourke sewage treatment plant in western NSW, while the number of venues of concern across greater Sydney continues to grow.

The outbreak plunged NSW Parliament into chaos on Thursday after Agriculture Minister Adam Marshall confirmed he was a positive case, while walking around Parliament and attending a budget night dinner of up to 80 people on Tuesday.