In the 10 years since they pressed pause on their propulsive, perky French alt-pop, Stereolab’s reputation and influence have grown beyond the limited success achieved during their two-decade recording career. Now they’re back and touring, their faltering performance on this night makes it look like their reputation not only precedes but exceeds them.

You have to feel some sympathy for their band members, who have the air of modest muso nerds with no hunger for the limelight. 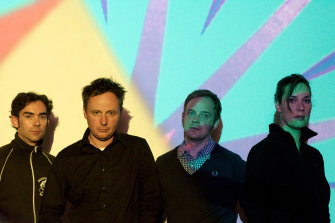 Stereolab are back on stage and playing festivals afer a decade on the sidelines.

There are no theatrics, no glitter, just some blokes in business shirts, a lead guitarist whose stage presence is more nervous tic than pop-star posturing and, in Lætitia Sadier, a lead singer earnestly reaching for the soothing French lilt that set them apart from their contemporaries.

With that modesty, however, comes a certain distance and a failure to connect.

Show opener Anamorphose makes their intentions clear – a metronomic and unassuming number that relentlessly moves forward like so much of this performance. Sadier’s vocals on this and the first few songs lacks the clarity of which she is capable but she soon finds her form as French Disko breathes life into the proceedings.

Alas, Stereolab do not sustain the momentum. When a band has 10 albums of great music and is playing a set a little longer than an hour, there shouldn't be a moment’s downtime – and yet for every catchy and clever Lo Boob Oscillator there’s a Need to Be that barely makes a mark.

The loyal audience willed them on and there were moments of genuine revelry in seeing a band written off return to life, if not quite to their finest form.

It may be unfair to load Stereolab with their weighty reputation: they give the impression that they just want to play clever little pop pieces for their own entertainment and invite us to observe.

That much they deliver, but they also leave the tantalising feeling that they are capable of so much more.