Last year, Victorian Premier Daniel Andrews was asked about what seemed to be a leak from the Morrison government, designed to make it clear quarantine problems were his fault. He told reporters, “My only quarrel, my only argument, my only fight is with the coronavirus”. Victorians, he said, wouldn’t want him to be spending time on political issues.

At the time, it seemed unlikely that, within a year, the Prime Minister those words were aimed at would be borrowing the line. But in recent weeks, Scott Morrison has been insisting that the Labor Party wants to fight with him, but “the only person I’m fighting is the virus”. 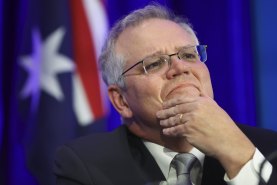 Scott Morrison says he is only interested in fighting the virus.Credit:Alex Ellinghausen

Another famous sloganeer also comes to mind: Scott Morrison’s hero and mentor, John Howard. The 2004 election tagline “Who do you trust?” was audacious, taking what seemed to political insiders one of the most legitimate criticisms of Howard – that he was cunning and deceptive – and turning it on its head. But deployed against the right opponent – Mark Latham, who couldn’t be trusted for completely different reasons – it worked a treat.

Morrison’s new catchphrase is audacious for similar reasons: it’s hard to think of a Prime Minister more focused on beating his opponents. But Morrison has two hopes here: first, that most voters don’t think much about his motivations, and second, that voters will see Anthony Albanese as a fighter rather than a leader, the same way they saw Latham as a risky firebrand.

The more important fact about the line is that it is about attention. Politically, it has the same impact as the national cabinet in the early days of the virus. It focuses attention on those with power, while sidelining the opposition. You play politics over in that corner, says Morrison – I’ll take centre-stage while I defeat this virus.

The most important thing to understand about contemporary politics is that it is a battle for attention. This has always been true, but the fragmentation of the public square and the multiplication of outlets competing for our eyeballs has elevated it further. Of all our recent politicians, Donald Trump understood this best. It’s technically true that Trump was beaten by Joe Biden, but the most persuasive case I’ve heard is that Trump was finally beaten by one of the few things capable of commanding more attention than him: a deadly pandemic. 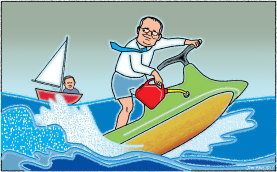 With less than a year until the election, this is Albanese’s greatest challenge. Winning the battle for attention is always hard for oppositions. Then there’s the difficulty of taking the leadership just after a loss, when nobody’s interested in you or your party. And then there’s the pandemic. For an opposition to succeed in this battle for attention, three stages must be successfully executed.

The first is to make voters sufficiently concerned about the government that they begin to look for an alternative. Might the current Victorian outbreak do this? In Victoria, it is generating anger and frustration – and not a little fear. Tomorrow is the first day of winter. It was near the beginning of winter last year that the virus outbreak in Melbourne really took off.

Of course, winter should worry all Australians. And here we come to the fickle nature of political attention. As one columnist noted during the bushfires, it was largely (and unfairly) the experience of Sydneysiders that turned the catastrophic bushfires into the dominant national political issue.

Similarly, it is easy to imagine, should the virus break free in Sydney, the national mood quickly turning sour. As long as the virus stays in Victoria, Morrison is likely to remain protected by the brutal fact that the rest of Australia is by now accustomed to lockdowns in the southern state. 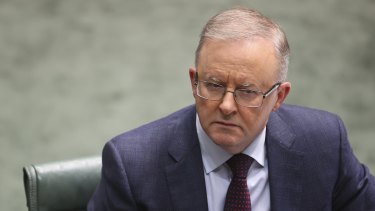 There is sympathy, but no pressing sense that this means the virus might break out anywhere at any moment (even though the quarantine breach was in South Australia). None of this is fair, or even connected to reality. (It is also a reminder that the most important single contributor to Morrison’s re-election prospects might be Gladys Berejiklian.)

If Albanese succeeds in this first stage of directing attention away from Morrison, then he can move onto the second, which is grabbing attention for himself. Here he must be wary of the Trump lesson. One of Trump’s mistakes was to believe, for too long, that he could compete with the pandemic for attention: that he could carry on in parallel with it, as though it didn’t matter. But in the war for attention, the virus always wins.

And so, one way or another, anything Labor announces must come out of the experience of the pandemic. New policies must fight the virus, or help prevent it, or attack the problems it has revealed, or take advantage of the opportunities it has created.

Finally, once you have people’s attention, you have to do something useful with it. Albanese must somehow win over a coalition of strikingly disparate groups. Morrison has certainly frustrated some demographics – the big-spending budget was a recognition of this fact. But being annoyed at the government, or disliking Morrison, doesn’t automatically mean they’ll vote for Labor.

Much of the recent discussion around Labor and blue-collar workers is silly – the idea Labor’s leadership has been obsessively focused on identity politics is la-la land stuff. But the underlying issue – how to convince very different voters, with very different beliefs, and very different backgrounds, to vote for the same party – is a real one. Whether anyone in Labor has an answer to that question remains unclear.