Christmas may be a little more than four months away but supermarkets have already started to launch festive products into stores.

But though the early release may irrirate some, Oreo fans are delighted as Morrisons has just brought back white chocolate-covered versions of the popular biscuits into stores.

At just £1.50 per box – which features a festive snowman – they are 25p cheaper than at discount store Home Bargains. 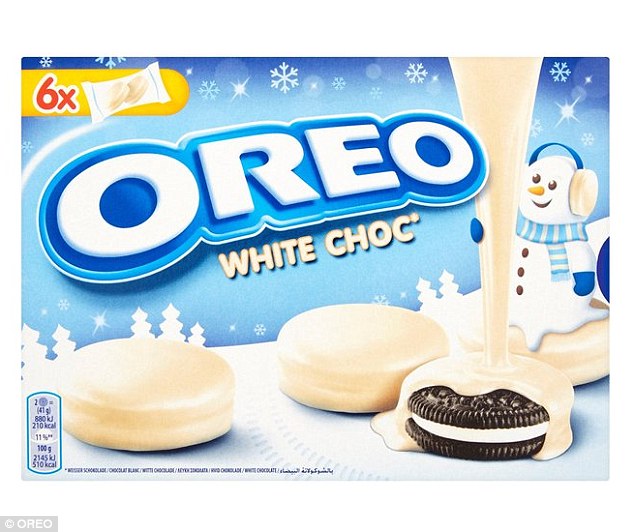 Morrisons is selling boxes of 12 white chocolate-covered Oreo biscuits – which feature a snowman on the front of the packet – for just £1.50, 25p cheaper than at Home Bargains

But what makes them different to ordinary Oreos is that they are then coated in thick white chocolate.

There are six portions in a box, with a portion consisting of two coated biscuits that contain 210 calories in total.

They are available online and in stores.

Deal hunters on the website HotUKDeals.com spotted the bargain price online and shared it on a forum, where Oreo lovers became very excited to see the sickly treats back at a major supermarket. Though one said the biscuits ‘tasted like candle wax,’ most said they tasted ‘amazing’

Oreo lovers were keen to get their hands on the treats as they discussed the relaunch on the deals website HotUKDeals.com.

One deal hunter said they were ‘awful… because they are addictive and the whole pack has to be eaten’.

Another said that the coated Oreos are the ‘best biscuits on the planet’ and said they cost £6.50 at Kingdom of Sweets and £4 at Duty Free.

Others pointed out the biscuits are also on sale at Home Bargains, where they cost £1.75 for a box, and Poundland, where shoppers stated they had seen them priced at both £1 and £2 at different times.

Amazon also sells a milk chocolate-coated version – but a box of 12 biscuits costs a whopping £6.85.