Woman asks whether her white outfit is appropriate to wear to a wedding and is met with a flood of criticism – but what do YOU think?

A mother has sparked outrage online after asking for advice on whether she should wear white to her sister-in-law’s wedding.

The British woman, known only by her username ‘Badbird’, took to Mumsnet  to share a picture of a monochrome outfit she was thinking of buying, before questioning fellow mothers whether it was inappropriate.

But users quickly flooded the thread, warning her against committing the cardinal sin of wearing white to a wedding.

‘Even though some brides wouldn’t mind, you can’t know for sure, so I wouldn’t risk it- especially family. It’s also by the way considered bad form to wear black,’ one warned. 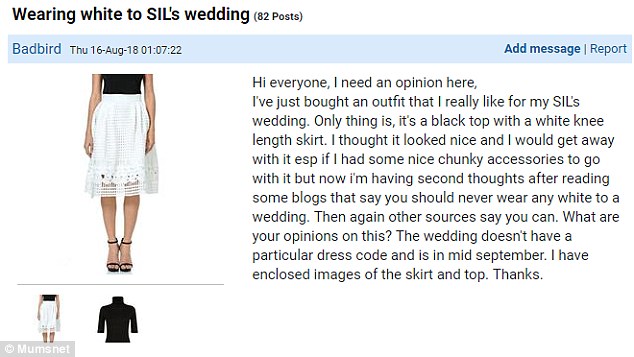 A British woman, known only by her username ‘Badbird’, took to Mumsnet to share a picture of a white skirt she was thinking of wearing to a wedding, which users deemed inappropriate

Looking for a solution, another asked: ‘Is the skirt available in other colours? It is a pretty style but I personally would avoid white at a wedding.’

Others were more concerned that ensemble seemed to casual for a wedding and said it looked more like something you would wear to the office, rather than a special occasion.

‘It’s white you must know you don’t wear white to wedding. And also black. You’re also family so will be expected to make a effort,’ one said.

One outspoken user even said: ‘Bloody rude to your host, who would be too polite to say anything. ‘Agree on not wearing white even if the outfit definitely doesn’t look bridal. It’s the bride’s privilege to wear white and I think it’s a respect thing.’ 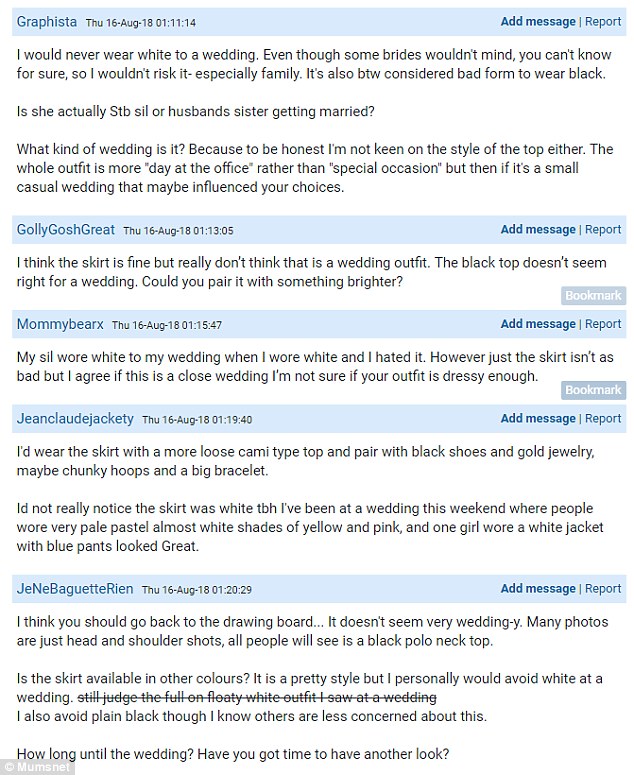 Users on the thread quickly flooded the thread, warning the mum against breaking the cardinal rule of wearing white to a wedding

However a few said they didn’t see the problem with one admitting: ‘I would, and have, wear black and white to a wedding. As long as it’s not an actual wedding dress what does it matter?’

Others argued that as long as the outfit didn’t look bridal, it was fine to wear white.

‘I don’t believe I know anybody who would be offended by someone wearing white or black to their wedding. Unless it was a wedding dress of course! I don’t really understand who these people are who have headspace for such nonsens,’ one wrote. 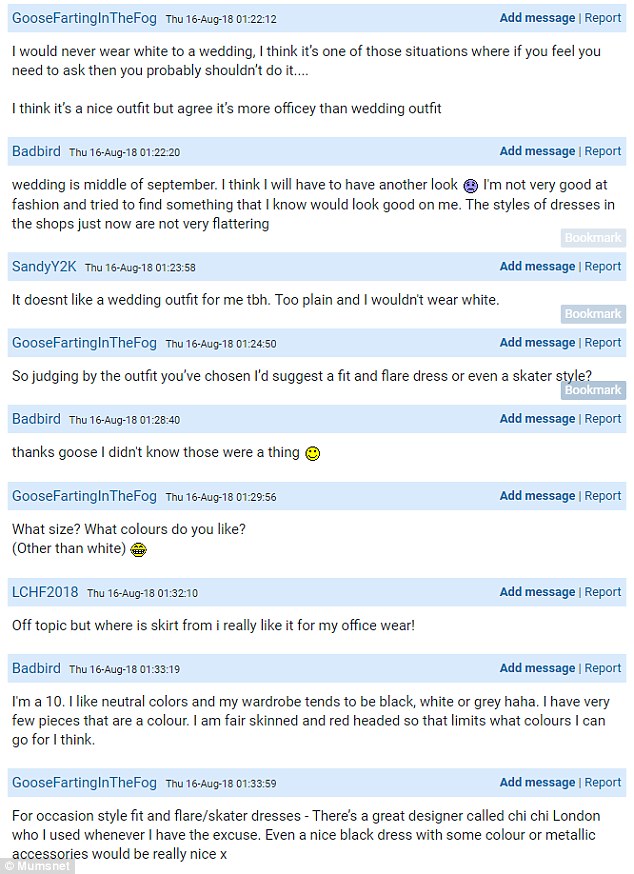 One mother pointed out that if the pictures just showed her top half, her outfit may appear rather sombre

But others were absolutely against the idea of wearing white, with one arguing: ‘I would never wear white to a wedding, I think it’s one of those situations where if you feel you need to ask then you probably shouldn’t do it’

However a few said they didn’t see the problem with wearing white, arguing it was okay as long as it didn’t look like a wedding dress