Parents turn on mother who admitted giving her daughter, 15, the day OFF school because she didn’t have any smart clothes to wear on careers day – so who do YOU think is right?

A British woman who turned to the internet for advice was given short shrift by fellow parents after she told them how she stopped her daughter, 15, going to a planned careers day because she would have had to wear smart clothes.

Writing on the parenting site Mumsnet, the woman revealed that her daughter’s school asked students to attend careers day wearing ‘business attire’, with the suggestion of a ‘trouser suit and heels’ for girls.

The mother claimed she was unable to afford the items needed to meet the dress code and so she decided to keep her 15-year-old daughter from going to school to prevent her being the only one wearing school uniform.

Asking for advice, she wrote: ‘I feel like a really **** mum to be honest because I couldn’t take her shopping to buy something to wear for this.

‘I know that’s not the school’s fault but I am a bit cross that they haven’t considered this might be an issue.

‘So AIBU to have let her stay home? She’s not just dossing about, she’s working with me today so kind of career-related I suppose. I’ve put my hard hat on because I know it’s very frowned upon to let children miss a day of school for anything other than illness.’ 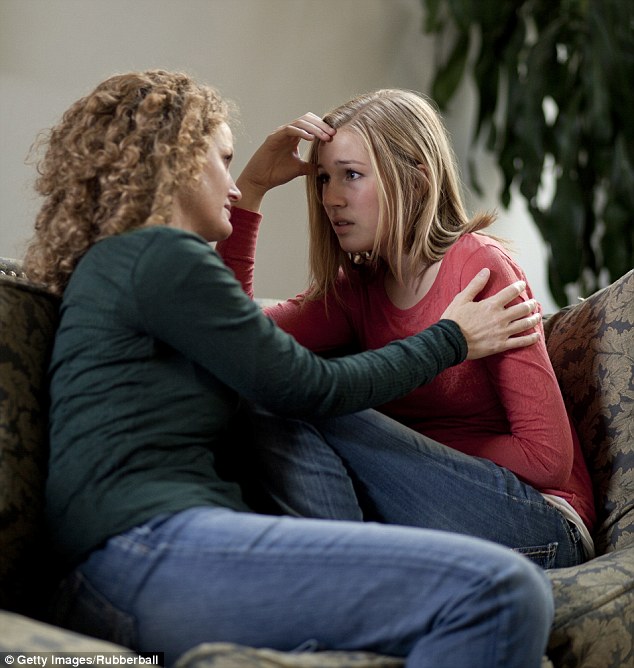 Better to go in the wrong clothes? Or stay off…that was the dilemma as mothers discussed the impact of schools asking students to wear business attire for a careers day (file image) 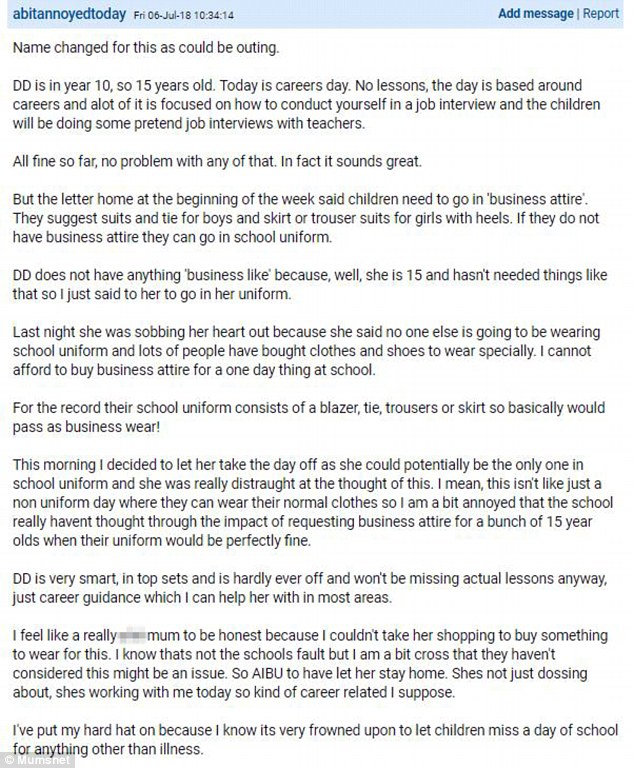 The post received a divided response with some admitting they would’ve done the same thing for their own child.

Many people agreed with the mother’s decision and blamed the school for putting her in a challenging position.

One person said: ‘I’m a teacher and I think you did the right thing. Whenever we have a non-uniform day, attendance rates drop massively. The school should know better.’

Another wrote: ‘It’s just like toddlers playing mummies and daddies, isn’t it? It’s fancy dress. By the time it rolls around that these clothes are required again they will likely be obsolete.

‘So school were asking you to buy one use outfit for dressing up day. Yanbu. School uniform for all would have been far more sensible.’

However, others stated the teen should’ve still attended the careers day even if she could only slightly modify her uniform.

One person said: ‘You were naive to believe your daughter would be the only one in uniform. You should have sent her in and encouraged her.’

Another user, ‘DisturblinglyOrangeScrambleEgg’, told the mother that she could’ve used the dress code as an opportunity to help her daughter develop resilience.

She wrote: ‘But they could go in school uniform – it was in the letter! Sometimes, you’re going to stand out for some reason, and there’s nothing wrong with it. It would stand your daughter in good stead to be able to shake this kind of concern off and do stuff that scares her anyway (it’s the best thing I’ve ever learned, and it took me until my 30s. I hope to instill it in my kids a lot sooner)’

The mother responded to a number of comments from Mumsnet users who questioned why she didn’t purchase clothes from budget retailers ahead of the day.

Writing under the handle, ‘abitannoyedtoday’, she said: ‘Actually I’m not a fan of school uniform but this is very different to wearing just non-uniform.

‘For those saying she could have found something in her wardrobe, she literally had nothing she can war. If she did, of course she would have gone in it. I’m embarrassed to say my dd has a grand total of six tops, two pairs of jeans, some jogging bottoms and a couple of jumpers.

‘No smart shirt or blouse. her tops are nice but t-shirt-like so not allowed. She does not have an actual wardrobe, just a single chest of drawers.

She owns two pairs of shoes – trainers and her school schools, of course she also owns about £200 worth of school uniform!’

She continued: ‘I work FT anyway and only place we could have got to out of hours so to speak would be Tesco, but I simply don’t have the money to spare.

‘Thanks for the positive replies all. I wonder if any more are off today for the same reason. It’s such a shame as the day could have been quite fun.’ 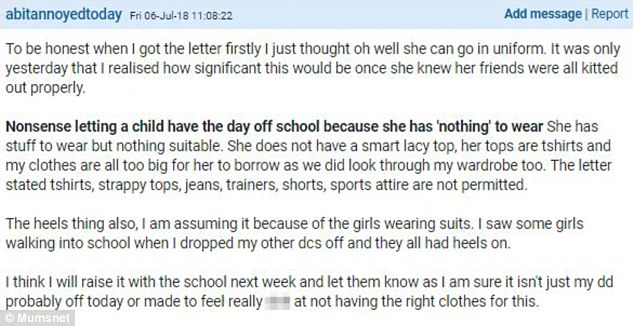 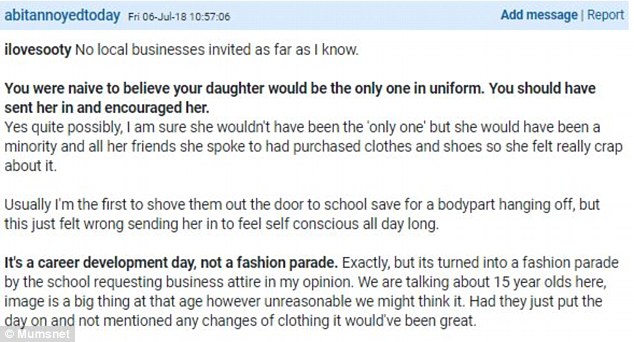