‘Leave us alone or arrest me’: Mother is set to openly ‘smuggle’ banned cannabis oil into Heathrow to keep her epileptic son alive 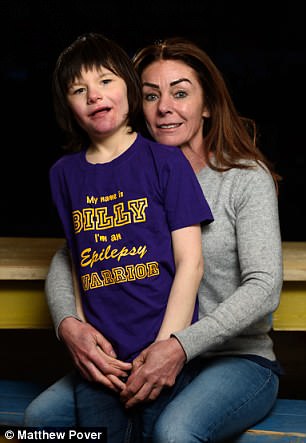 Charlotte Caldwell, the mother of Billy, 12, plans to return to Britain with a consignment of medical cannabis obtained in Canada

The desperate mother of a boy suffering from severe epilepsy plans to fly back to Britain tomorrow with a consignment of medical cannabis obtained in Canada and declare it to customs officials.

The dramatic move by Charlotte Caldwell to openly defy drug laws is the most brazen challenge yet to Ministers over the ban on medical use of marijuana.

It presents new Home Secretary Sajid Javid with a dilemma over whether to strip her of a medicine credited with saving her son Billy’s life.

‘I will ask them if they will let me keep this safe, regulated medicine that has kept my little boy alive – or are they going to take it off me, condemning my son to possible death?’ said Ms Caldwell.

‘If they confiscate Billy’s medicine and arrest me, they are signing his death warrant.’

Billy, a lively 12-year-old boy with autism and intractable epilepsy, became the first patient in Britain to be prescribed cannabis-based medication on the NHS after enduring up to 100 seizures a day and routinely ending up in hospital.

He was originally given the treatment by a doctor in the US, where it is legal in the majority of states. Ms Caldwell said it rapidly stopped Billy’s seizures and drastically improved his quality of life.

But the single mother from Castlederg, County Tyrone, was left distraught last month when the Home Office told her family doctor to stop doling out the drug or face disbarment. ‘I had to read the email six times in disbelief,’ she said.

So on Thursday – one day before her son’s supply ran out – she flew to Toronto to get a new prescription, accompanied by this newspaper.

She will return tomorrow with a six-month supply of a specialist cannabis oil, which is administered in oral drops. ‘I hate having to do this,’ she said. ‘For a mother to be pushed into breaking the law to keep her son alive is horrendous. But this drug has given me hope and given my son back his right to life.

‘Of course I worry about breaking the law – but I want my son illegally alive rather than legally dead.’

Ms Caldwell will be met at Heathrow by the parents of eight other children with epilepsy supporting her campaign. ‘We’re fighting not just for ourselves but to give all those other families the right to hope,’ she said.

They are backed by Dan Poulter, a former Tory Health Minister who still works part-time as a doctor in mental health services. He recently started an all-party parliamentary group supported by three other doctors at Westminster pushing to legalise medical cannabis. ‘The current law is ridiculous,’ said Mr Poulter. ‘There is growing evidence cannabis products used medically can be helpful in a number of conditions, but it is still seen through the prism of illegality.’

This challenge comes amid growing pressure for reform from patients and families. Three months ago, Theresa May met the parents of Alfie Dingley, a six-year-old with epilepsy, who had been treating their son successfully with an oil obtained in Holland. 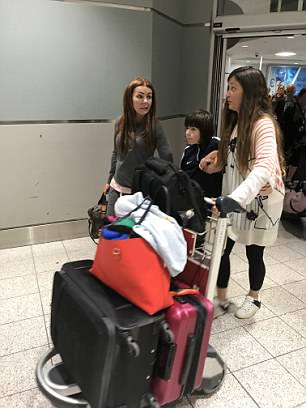 Ms Caldwell’s trip to Canada, where she is pictured with Billy, was aided by the Centre for Medical Cannabis, a pressure group led by former government adviser Blair Gibbs

Mrs May was moved by the case and promised to find a way to make the medicine available for them in Britain. Home Office officials, however, fear opening the floodgates for other patients who would be able to seek judicial review if denied cannabis treatment.

Ironically, Britain is the world’s largest exporter of legal cannabis grown for medical markets. A recent poll found three-quarters of voters back doctors being permitted to prescribe cannabis.

Ms Caldwell is a passionate promoter of the cause after seeing the dramatic impact on her son’s life. Even after 20 hours awake, travelling from Ulster to London, then on to Toronto, Billy was smiling and energetic – despite standing up for much of the transatlantic flight.

On Friday, the boy was examined by doctors. They also questioned Ms Caldwell on his medical history and weighed her son before prescribing the drug and setting the dose. I agreed not to reveal the doctors’ names. But one said he had seen at least ten other British patients in the past two years at his Ontario clinic.

‘I have no doubt this is an effective drug,’ he said. ‘A couple of years ago, lots of my colleagues did not agree with prescribing it but now they are referring patients to me and telling their families to come here for treatment.’

Ms Caldwell calls epilepsy ‘brutal’ for its destructive impact on families and sufferers. But the doctor said cannabis could reduce the intensity of seizures, soften their impact, enable patients to cut powerful cocktails of prescribed drugs and slash the number of attacks. ‘I love hearing that one of my patients has not had a seizure for six months,’ he added.

These are dramatic claims, especially given the risk of sudden death during seizures. Sceptics argue much evidence is anecdotal, although there is more and more clinical data as use of medical cannabis rises. ‘It’s not a miracle drug but it deserves respect,’ said one expert.

The laws on the medical use of marijuana were liberalised in 2001 in Canada – on the day we arrived it also sanctioned the legalisation and regulation of recreational use.

The drug prescribed for Billy is made by Tilray, a British Columbian manufacturer. Like most cannabis-based epilepsy medicines, it has a very high ratio of CBD (the non-psychoactive chemical found in the plant) to THC (the chemical that intoxicates users). Doctors told me it would be impossible to use this drug to get high – and since it is an oil, the THC cannot be separated out. Cannabis products containing THC are illegal in Britain. 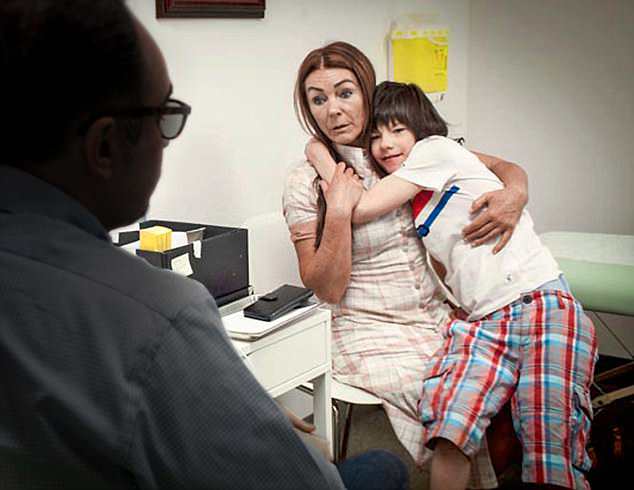 Ms Caldwell raised more cash and returned to her US doctor, who discussed the concept of medical cannabis, sent her to a specialist and found the correct dosage to stop the seizures

Tilray’s director of clinical research Catherine Jacobson, whose own child has epilepsy, said cannabis contains more than 100 different chemical compounds so the challenge was to work out which worked for particular conditions, then the correct doses.

Britain’s cannabis ban comes under the 1971 Misuse of Drugs Act. Campaigners argue this muddles recreational and medical use but Ministers are wary of reform amid concerns that stronger street cannabis is causing an epidemic of mental health problems among younger users.

Yet Ms Caldwell fears the Government is forcing British parents into illegality, either by using cannabis bought from street dealers or by smuggling in medical products permitted abroad in countries such as Canada, Germany and the US.

This is her latest battle since Billy’s birth turned her life upside down, forcing her to ditch a thriving career in the tourist industry. Her relationship with Billy’s father quickly fell apart and she is constantly with her son, even at night. She has one other adult son.

The epilepsy became evident when Billy was four months old, leading to a 16-week stay in hospital. ‘I just felt powerless and sick in my heart,’ she said. ‘He was having hundreds of seizures a day and they could not get them under control.’

After doctors told her they could do no more for the boy, she raised £250,000 in just ten weeks to fund treatment in Chicago. She spent two years living there as her son was given intensive physiotherapy to boost his development.

‘I was kept going by love, faith and hope for Billy,’ she said. ‘I dreamed one day he might be able to run towards me and say, “Mummy.” It was like a miracle when he finally did this.’

When the cash ran out, she borrowed £25,000 from a bank to pay for private treatment and moved to Oxfordshire. ‘Eighteen months later Billy walked through the airport in Ireland. I was left with nothing but I felt triumphant that he was walking and free of seizures.’

But the epilepsy returned with frightening strength two years ago, which doctors blamed on a brain lesion triggered by earlier seizures. They raised the possibility of surgery, but it would have wiped out his memory and hard-fought ability to walk. 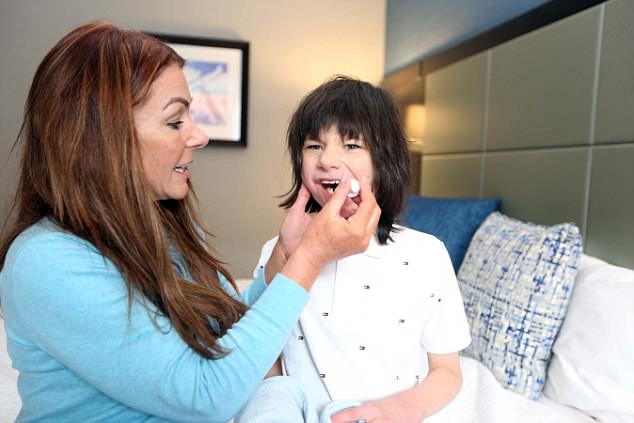 After doctors told her they could do no more for the boy, Ms Caldwell raised £250,000 in just ten weeks to fund treatment in Chicago

Ms Caldwell raised more cash and returned to her US doctor, who had moved from Chicago to a Los Angeles hospital. He discussed the concept of medical cannabis, sent her to a specialist and eventually they found the correct dosage to stop the wretched seizures. After eight months in California, funds dried up again. The pair returned to Northern Ireland – and spent eight days walking 150 miles from their home to the hospital to highlight the dramatic improvements in Billy’s condition thanks to his cannabis treatment.

Her GP agreed in April last year to prescribe cannabis oil, supplied by an American company – until the Government warning last month to stop.

‘My mission as Billy’s mum is to keep him alive. I scoured the globe to find the medicine that was saving his life. The debate on cannabis is so muddled – this is not recreational cannabis but a safe, regulated drug. And this is not just for Billy. There are 240 other children in Northern Ireland alone who suffer intractable epilepsy.

‘Can you imagine how cruel it is to see children having these seizures knowing there is a drug that could help but they are not allowed it? We have to find a solution.’

Ms Caldwell’s trip to Canada was aided by the Centre for Medical Cannabis, a pressure group led by former government adviser Blair Gibbs. ‘This isn’t about legalising pot but providing safe, pharmaceutical grade products for a defined set of health conditions,’ he said.

The Home Office said: ‘We are sympathetic to the difficult and rare situation that Billy and his family are faced with.

‘While we recognise that people with debilitating illnesses are looking to alleviate their symptoms, it is important that medicines are thoroughly tested to ensure they meet rigorous standards so that doctors and patients are assured of their efficacy, quality and safety.’

I have rarely met a more determined person than Ms Caldwell. Her efforts have made her something of a celebrity in Northern Ireland, with one man in a wheelchair on her flight from Belfast giving her £10 with instructions to ‘buy Billy a wee gift’.

So as we left one of the Canadian clinics, I asked what will she do if officials take away her son’s supply when she lands tomorrow. ‘I’ll go back and get some more,’ she said.