A dog owner was so devastated when her beloved chihuahua died that she got the family pooch stuffed so she is now quite literally ‘part of the furniture’.

Kimmy Walker-Harris, 40, from Alford, Lincolnshire, said she’d always joked about getting the ‘best dog she’s ever had’ preserved and despite ‘scepticism’ from her family went ahead with it when Fifi died aged 13 in February.

The self-professed ‘crazy person’ described her pet as a ‘small dog with the biggest personality’ and couldn’t bear the thought of not seeing her ‘precious’ pooch every day so forked out £400 on the taxidermy piece.

The mother-of-two said she had to freeze Fifi immediately after she died before sending her to the taxidermist and when she returned home eight weeks later believes she did a ‘great job’.

The ‘new Fifi’ now takes pride of place on a chair in the bedroom Kimmy shares with husband Stuart Walker-Harris, 44, and she still greets her ‘special’ pet every morning. 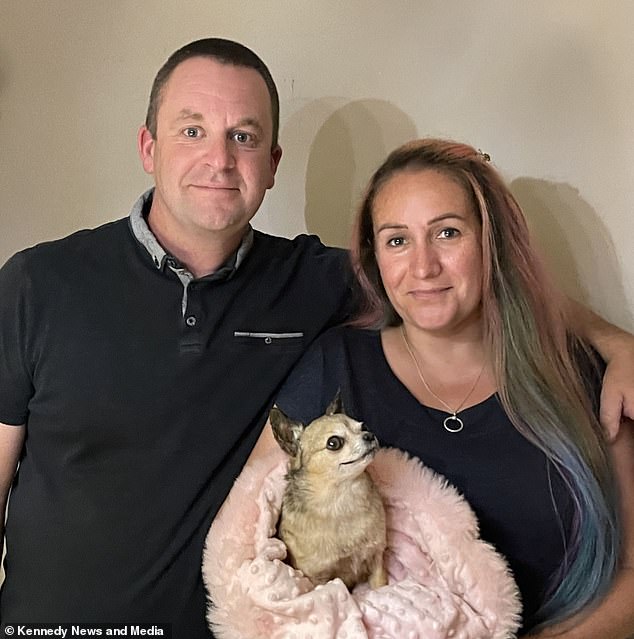 Kimmy Walker-Harris, 40, and husband Stuart, 44, from alford, lincolnshire, with Fifi who has been turned into taxidermy, after dying aged 13 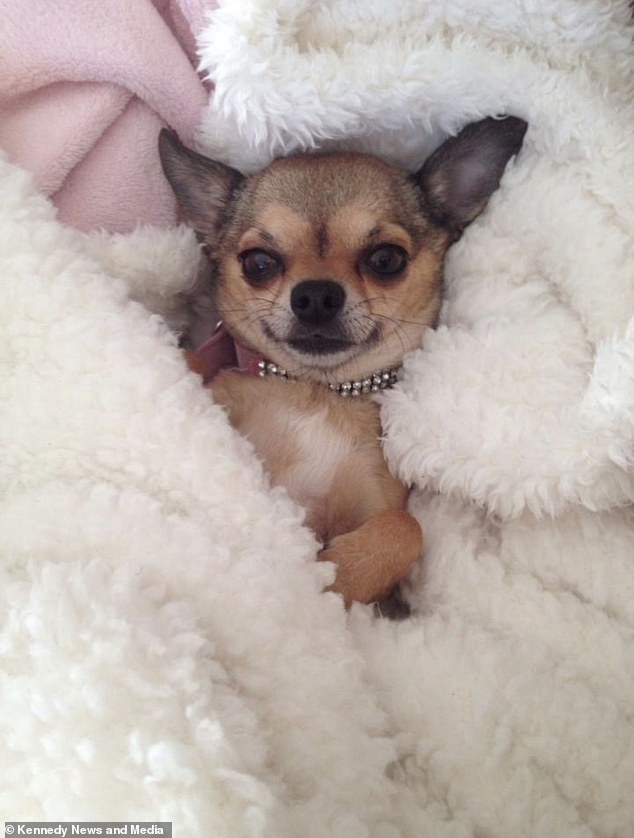 Fifi in happier times! The beloved family pet was a ‘small dog with the biggest personality’, according to her owner 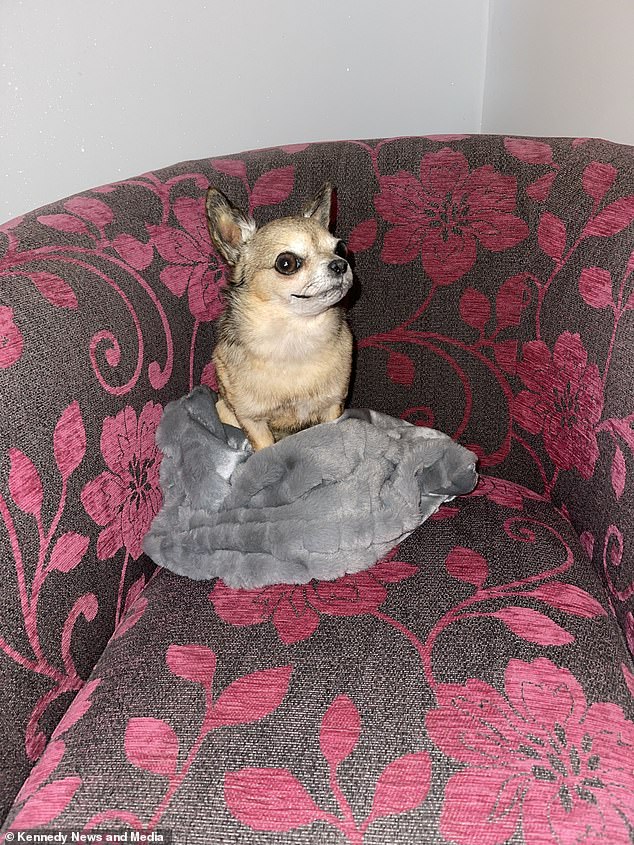 Kimmy said: ‘My parents thought it was a bit weird but they get their dogs cremated and have pots of ashes all over their house.

‘It’s what different people do I suppose, some people bury them, some people have their ashes – I’ve just got Fifi in her shell.

‘My family and friends didn’t really say anything about it. I suppose I’m quite a crazy person anyway so they probably just thought ‘she’s just crazy anyway’ – it’s the kind of crazy thing I’d do.

‘Fifi was a small dog with the biggest personality – she was just the best dog ever so I wanted her to live forever. 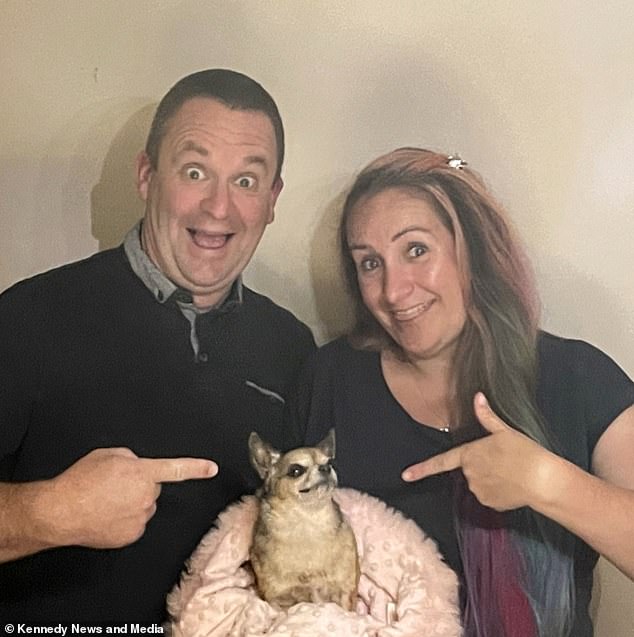 Kimmy said that her husband Stuart (left) and children were initially unsure about the idea of having Fifi stuffed, but ultimately said she should do what made her happy 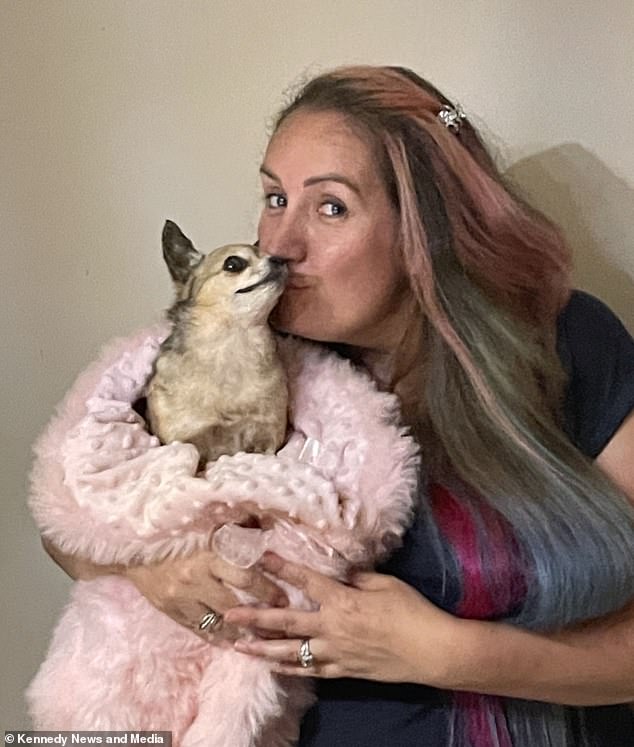 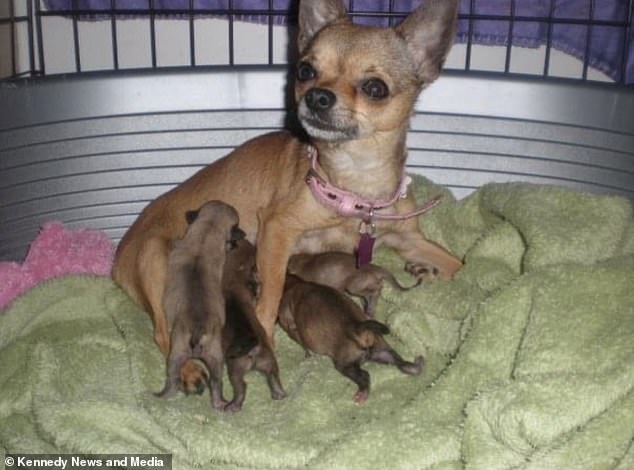 Fifi who was as a ‘small dog with the biggest personality’, pictured with one of her litters of puppies

‘I always speak to her and will say, “Morning Fifi”.

‘She’s on my side of the room but my husband sees her and just says “hi” to her occasionally – she’s just there and has been here for so many years and is part of the furniture literally.’

Kimmy, who owns ten dogs, said that although her ‘cute’ chihuahua was the second smallest of the bunch, she was the ‘boss’ of their household.

She had previously buried all of her other pets, but Fifi was ‘special’.

Kimmy said: ‘We’d always joked all through her life that we’d get Fifi stuffed because she was just the best little dog and we didn’t ever want to lose her because she was so brilliant. 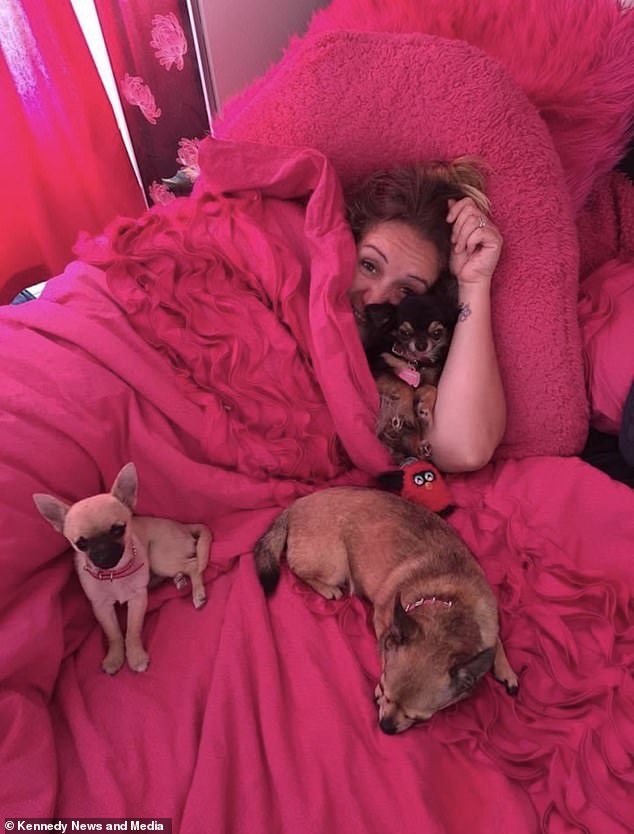 Kimmy, pictured snuggling up with a few of her ten dogs, said that although her ‘cute’ chihuahua (centre) was the second smallest of the bunch, she was the ‘boss’ of their household

‘When she got ill in August [2020] I started thinking about it seriously and thought: “Should I really get it done? What would it be like not seeing FiFi every day?”.

‘I just thought, “I can’t not see her every day” and wanted to touch her and see her, so it just went from there.

‘I did think about just burying her as people thought taxidermy is a bit weird and it’s not right for pets, but I just had it in my head then and started speaking to the taxidermist.

‘My husband and the children were a bit sceptical and unsure of having her done and thinking maybe we should just bury her but ultimately she was my dog and my baby so they said, “Whatever you want to do, fine”.’ 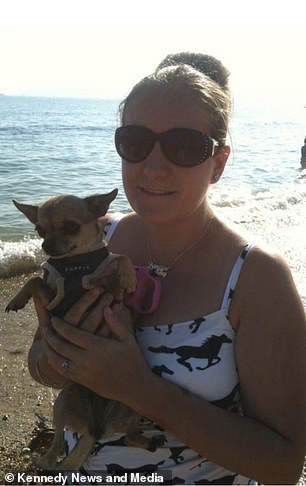 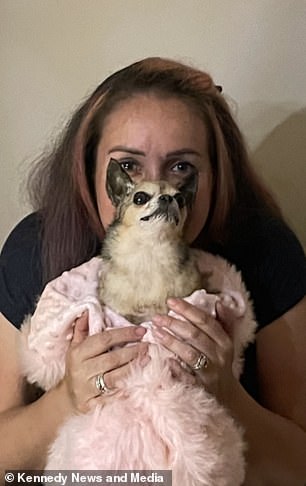 Kimmy with her beloved pet in happier times (left). She said that when Fifi fell ill in August 2020, she started thinking about having her stuffed when she died 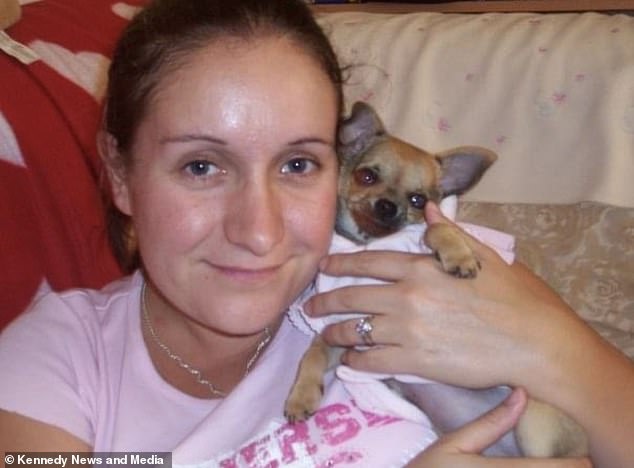 Kimmy pictured with Fifi as a puppy. She had the chihuahua from when she was just eight weeks old and said she was the best dog she’s ever owned 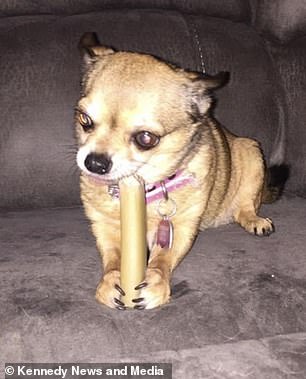 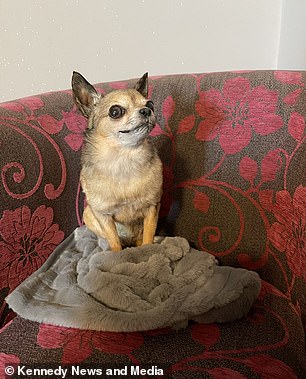 Fifi enjoying a dog chew as a puppy (left). Her owner Kimmy said that when she returned from the taxidermist (right), Fifi looked great although she agrees that some of her features look different because it’s impossible to do a perfect job

Kimmy said that as soon as she said her goodbyes to Fifi and she passed away in the vets she had to be placed in the freezer for a week before being sent away to the taxidermist.

The 40-year-old said it was ‘horrible’, but it’s something that has to be done as soon as possible.

She said that many taxidermists don’t do pets because it’s ‘very different’ to working on wildlife given that it’s difficult to capture their personalities that the owner comes to know so well and love. 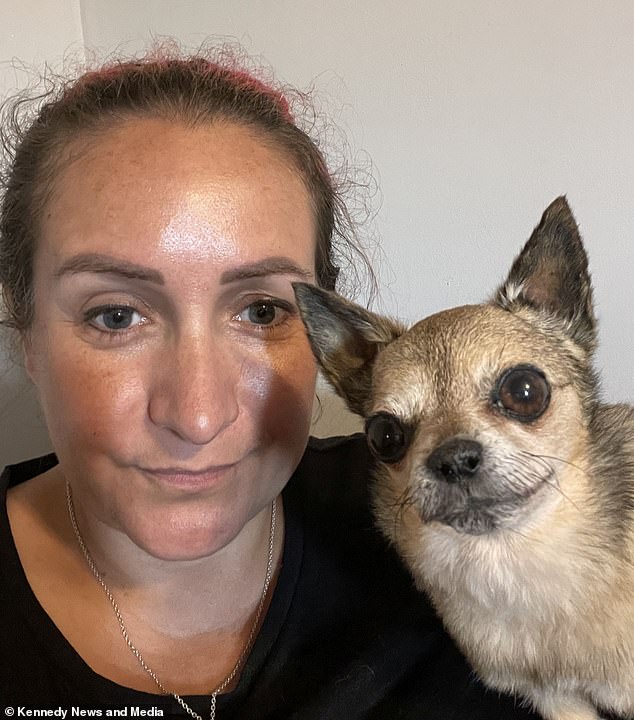 Kimmy said that it’s difficult for taxidermists to capture their personalities that the owner comes to know so well and love, but is pleased with the results after paying £400 to have her beloved Fifi stuffed

‘To anybody that didn’t know Fifi you’d look at her done and be like “that’s amazing”, but to us and the family she doesn’t look quite right because it isn’t her. But you’re never going to get that because she isn’t alive anymore – it’s a very strange and weird concept that’s hard to explain.

‘It’s just the personality and the soul that’s gone – you can’t fake or make that come back.

‘She did a great job on her – the eyes are just like hers, there’s a couple of things that aren’t her but you can’t have that perfect because the bones and structure isn’t there, her mouth is slightly different but other than that she’s done a really good job.’

The mother-of-two said that Fifi was posted back in two boxes with her ‘inner self’ in biodegradable packaging which was buried in a sentimental spot in their garden.

The other box contained Fifi’s ‘new self’ which has been placed on a chair in the corner of their bedroom.

Kimmy said: ‘I cried a lot when she went and when she came back – it’s still really upsetting that she’s not here, you just want them to live forever and when they go it’s just awful.

‘It’s very strange to get your head around – it’s bizarre.

‘I like seeing her and stroking her and am glad that I’ve had it done and she’s here, but it’s not the same as having her.

‘Fifi was the best dog I’ve ever had and was so precious.’