A mother who feared her husband would no longer find her attractive after falling in a fire-pit twice has bravely shared images of her horrifying burns to show other victims that it is what is on the inside that matters most.

Sherri Tripp, 50, from Kalispell, Montana, fell head first into a huge fire-pit at her daughter Sarah’s graduation party in June 2018, before slipping back into it and setting herself on fire again in the hot coals.

After eight operations and suffering third and fourth degree burns across her head, face, chest, breast, arm, back and hips, the mother-of-12 feared she would no longer be physically attractive to her husband James, 49.

But with his love and support they learned to be intimate again. Now she’s sharing pictures of her injuries to inspire other women with burns and let them know that any man who doesn’t stand by them ‘doesn’t deserve them anyway’. 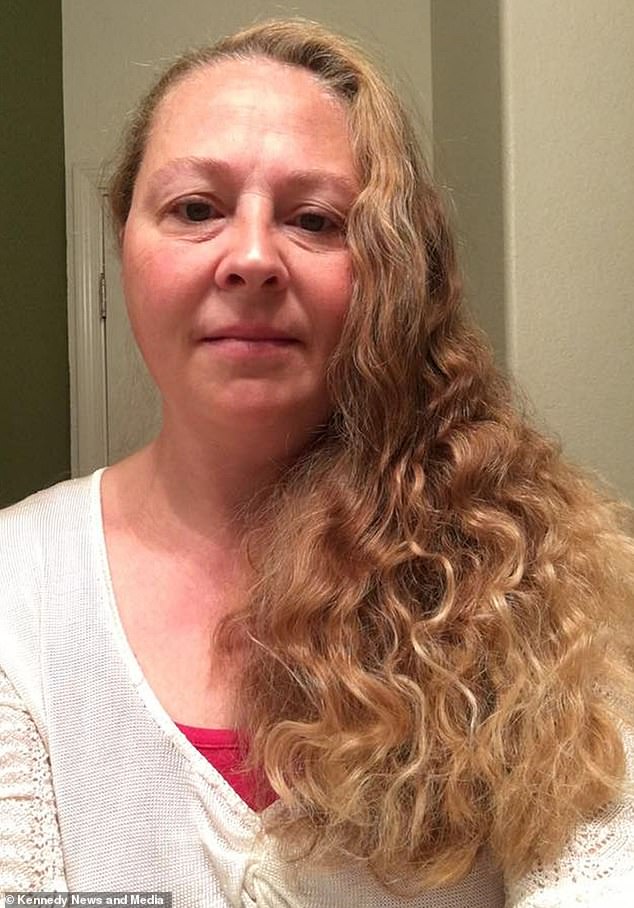 Sherri Tripp, 50, from Kalispell, Montana, fell head first into a huge fire-pit at her daughter’s graduation party in June, before slipping back into it and setting herself on fire again in the hot coals 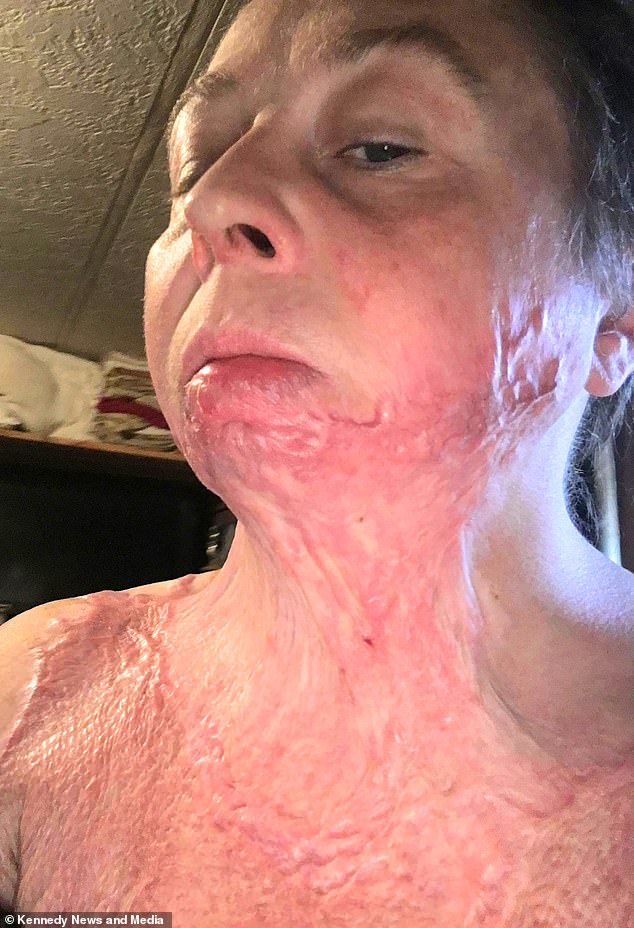 The mum-of-12 needed eight operations after suffering third and fourth degree burns across her head, face, chest, breast, arm, back and hips 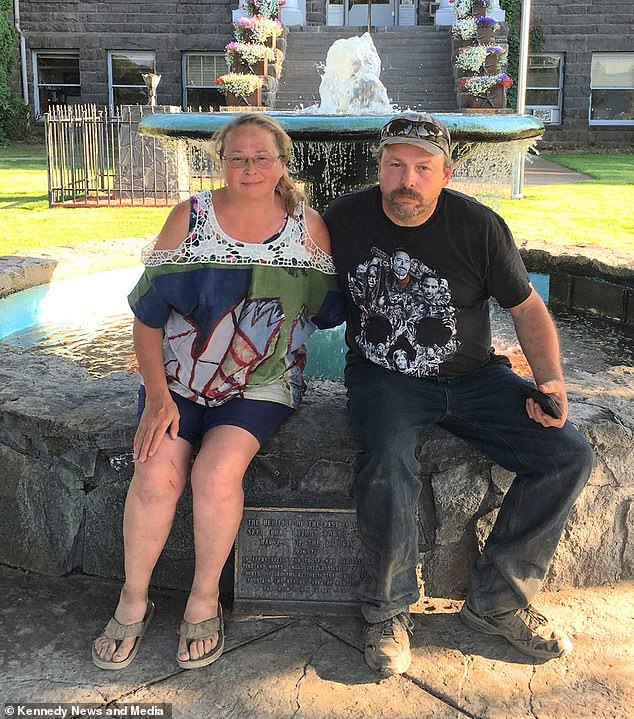 Following the terrifying incident, she worried her husband James, 49 (above) would no longer find her physically attractive

‘As a woman you think when you’re not psychically attractive, how does your partner feel?’ said Sherri.

‘Having James’ support has really made a difference.’

She added: ‘For a while it was really tough to be intimate. He was afraid of hurting me but I reassured him and said I’ll tell him what I can and can’t do.

‘It’s improved our communication as a couple, but I’ve read stories about women who come home after being burnt and they’ve lost their husbands or boyfriends.

‘If I could say anything to them it’s that if these men aren’t going to stay with you through this they aren’t deserving of you.

‘I remember a young lady who killed herself in her twenties after being burned. It’s so horrible.’ 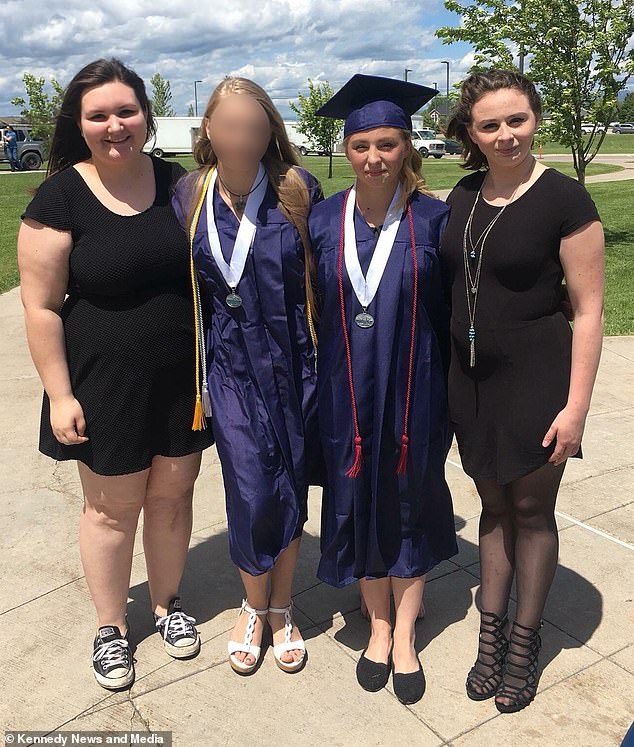 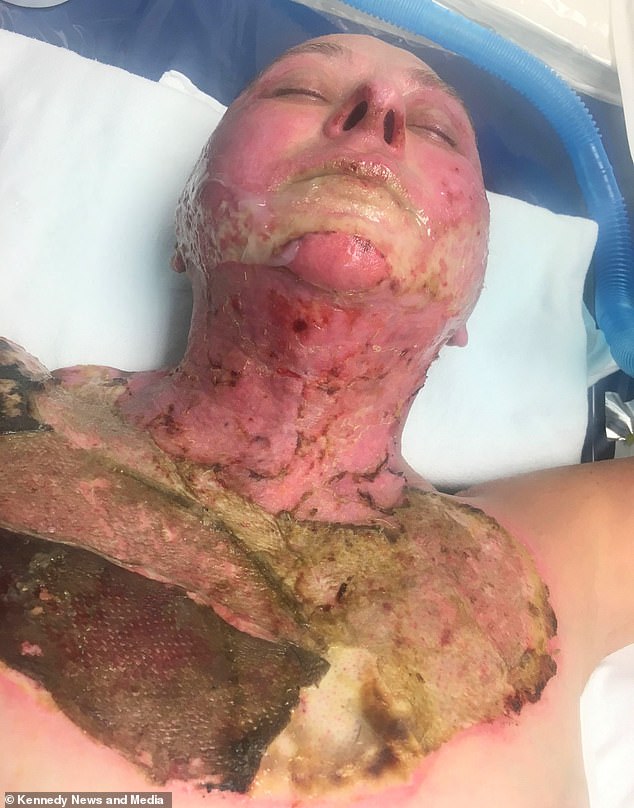 The brave mum described how the fire burnt her from just below her nose, all the way down to her hips. Above, Sherri’s burns just days after falling into the fire pit 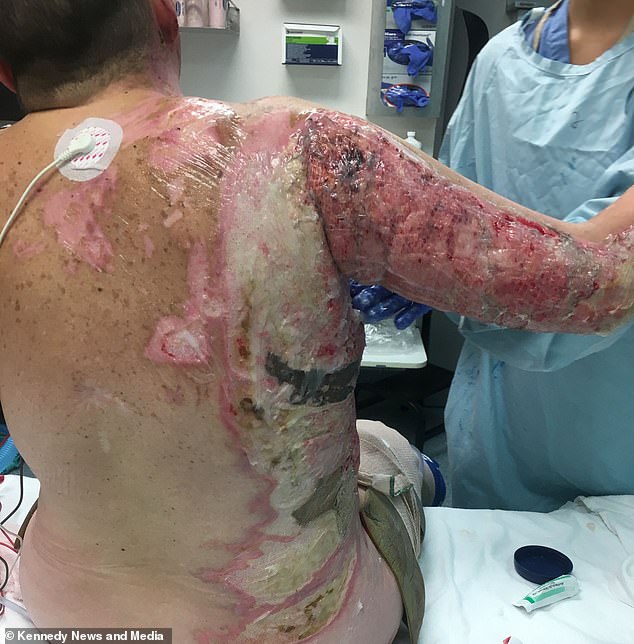 After she was rescued by her struggling friend, Sherri frantically rolled around to stop the flames, before stripping off her clothes. Their location meant it was quicker to rush her to hospital than to wait for an ambulance

Sherri had planned the celebratory barbecue for Sarah in June ahead of her leaving for university and invited more than 150 friends and family members.

Decorating the grounds of their 400-acre home, Sherri had dug a three-foot-deep fire-pit behind their house for 18-year-old Sarah’s friends, who would camp outside. 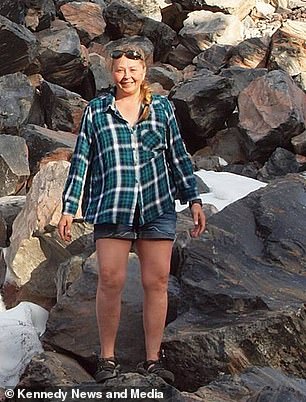 On the night of the terrifying accident, Sherry was ‘very proud’ of her daughter so had decided to throw her a family barbecue

At the end of the night’s celebrations, she stood up to go to bed, tripped over her feet and fell into the pit, landing in hot coals.

Stumbling to get up, Sherri slipped again, falling for a second time into the coals and newly-ignited flames – burning the entire right side of her body.

Six months on and after eight operations, Sherri still faces losing mobility as scar tissue develops, risking her ability to open her mouth or use the bathroom herself.

‘It’s been so tough,’ said Sherri. ‘The fire burnt me from just below my nose all the way down to my hips.

‘My lower jaw, chin, upper chest, right breast, arm, armpit, shoulder, clavicles, all the way down to my hips, from the centre of my back to the middle of my chest – all burnt.

‘At first there was some pain, a lot of adrenaline and a lot of shock.’

Sarah, who now studies Veterinary Sciences at Montana State University, was the first of Sherri’s 12 children to go to university. 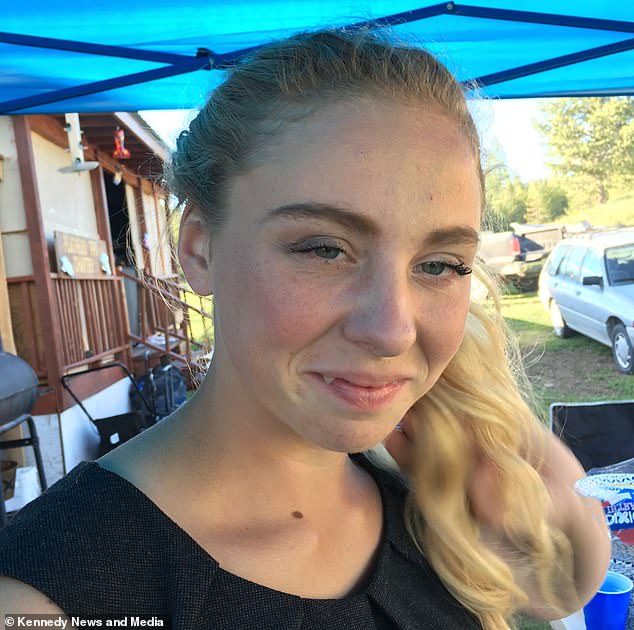 As Sherri lay in the back of the car, her daughter Sarah (above) fought to keep her from losing consciousness

‘We were very proud of Sarah and wanted to throw a nice barbecue and invite family,’ explained Sherri. ‘They could camp outside our huge property.

‘I’d been cooking since some ungodly hour the day before. We were so excited.

‘Bonfires happened, alcohol happened and people were having a good time at the bar.’

As the night drew in and guests went back to their tents, Sherri and her son Aaron, 27, reflected on the evening’s events.

When she stood up to go back to the house, she stumbled over her own feet and fell into the fire-pit, reigniting the flames.

‘I was wearing a dress, long sleeved shirt and a polyester-style jacket,’ explained Sherri. ‘All thick materials.

‘My first thought was “okay, just back out of it.” I tried to back out but I was bringing rocks up on top of me.

‘I was trying to catch my breath – it was so hot.

‘Most of my right shoulder, ear and hand were either on the side of the pit or holding me up.

‘Using my left hand I tried to get out but I just couldn’t get any leverage.

‘So I called for help, but I was having a really hard time vocalising the words. I couldn’t get the sounds to come out.

‘Finally a friend was able to hear me from her tent and she pulled me out.’

After she was rescued by her struggling friend, who was also burnt in the process, Sherri frantically rolled around to stop the flames, before stripping off her clothes.

Aaron returned after hearing the screams and called an ambulance but their location meant it would be quicker to rush her to hospital himself.

As Sherri lay in the back of the car, Sarah fought to keep her mum from losing consciousness.

Over the next couple of days, Harbour View Medical Centre, Seattle, medics worked on stabilising Sherri and started to repair her body after the burns. 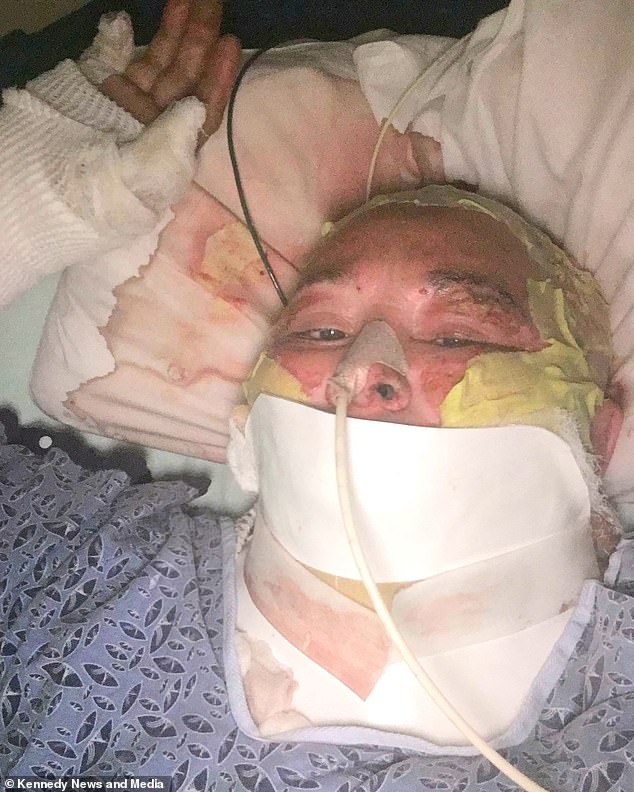 The most heavily damaged area of Sherri’s body was her neck and chin, so her first operation was a skin graft from her head to replace the skin lost. Above, Sherri after her skin graft surgery 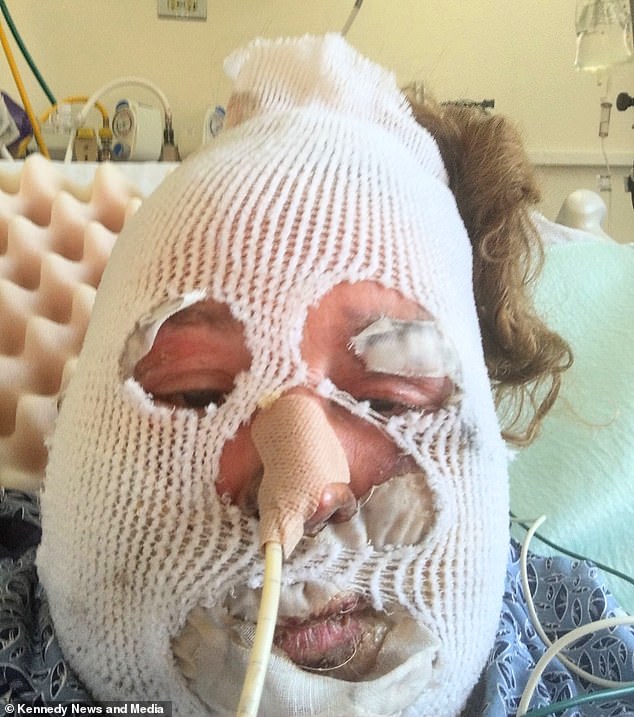 At the hospital, doctors did a split thickness graft and attached it to Sherri’s neck. Incredibly swollen, she said she felt like ‘the character from Willy Wonka who turned into a blueberry’

The most heavily damaged area was her neck and chin, so her first operation was a skin graft from her head to replace the skin lost.

‘I had really long hair almost to my waist but I said ‘if you’re going to shave my head, you’d better not leave any patches,’ said Sherri.

‘I loved my hair but it will grow back, or, if it doesn’t, I’ll find some really cool wraps to put on my head.

‘They did a split thickness graft and attached it to my neck. I had collars to keep it all in place.

She added, ‘I felt like the character from Willy Wonka who’s turned into a blueberry. I was incredibly swollen and red and everything was tight – I couldn’t move.

‘In June 18, I had a couple of other surgeries where they grafted skin from my legs and thighs to cover my arms, back, shoulder and upper chest.

‘My skin was trying to contract and it was really hard to move. I still had open wounds at this point.’ 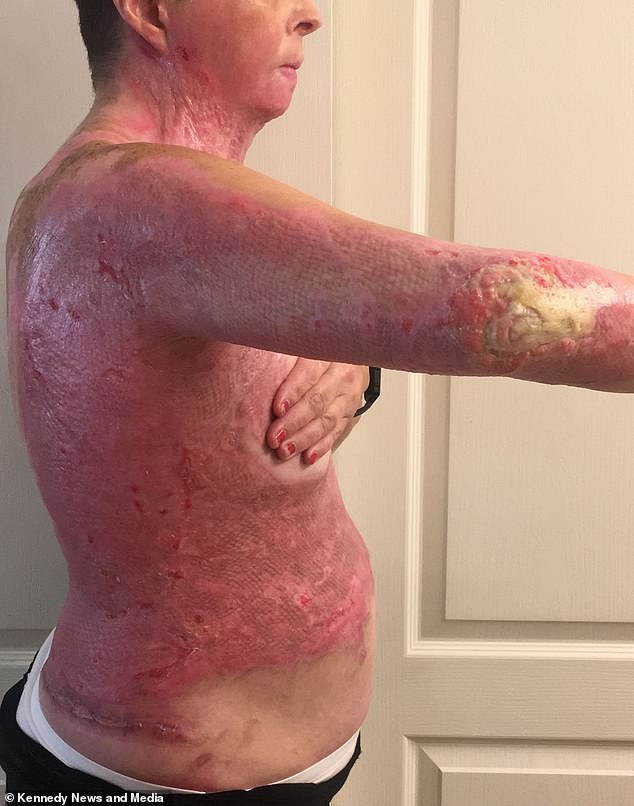 While Sherri’s grafts are mostly healed, they continue to create scar tissue that leads to knots under her skin 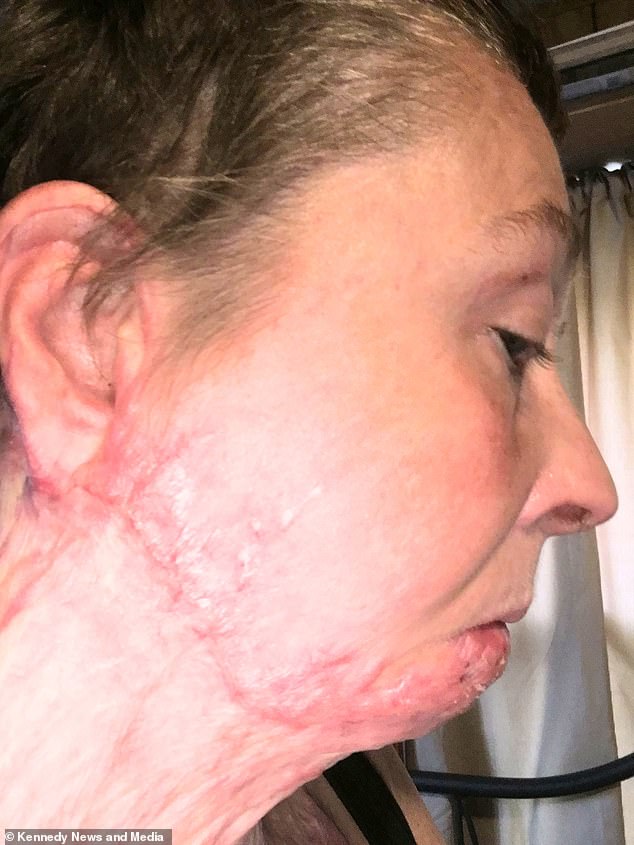 Sherri now self-massages several times a day and believes her newly-developed arthritis is a result of repetitively rubbing her scars. Above, Sherri’s neck after her skin graft started to heal

In the following six months, Sherri rested at home and attended physiotherapy appointments each week with two different therapists.

While her grafts are mostly healed, they continue to create scar tissue that leads to knots under her skin.

As well as professional massages and therapists, she now self-massages several times a day and believes her newly-developed arthritis is a result of repetitively rubbing her scars.

‘In the beginning I had very limited mobility. In the last month I’ve been able to gain a bit of that back,’ said Sherri.

‘I’ve been in Xeroform and a variety of other dressings now for six months. I’m still using something on my elbow because that’s not closed.

‘I have to change those every couple of hours.’ 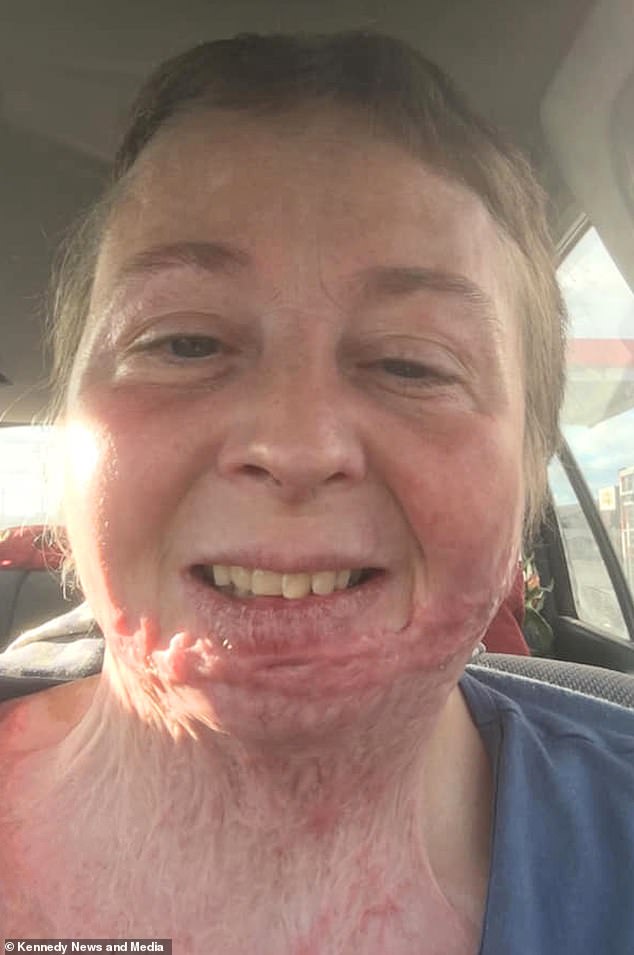 Six months on and after eight operations, Sherri still faces losing mobility as scar tissue develops, risking her ability to open her mouth or use the bathroom herself

Despite her ongoing journey of recovery and the fear she could lose her mobility in the future, she has issued a message of support to other women going through the same thing.

Sherri has now vowed to ‘put her face back where it belongs’ and stay strong for others going through the same thing.

‘I want to reach out to women and say that we deserve to be appreciated for what’s inside us too,’ explained Sherri.

‘My life is more important than my hair and my hair does not define me. Nor does my skin, nor does my scars.

‘I’m not going to just be a statistic, I can do better than that.

‘I’m going to put my face back where it belongs and we’ll move on with our lives and keep going. 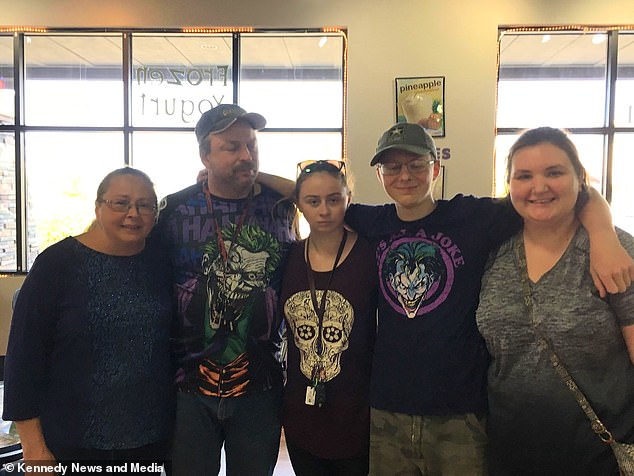 Sherri has now returned to work and is looking forward to a quiet Christmas with her family. Above (left to right) Sherri with husband James and children Sarah and John, and adopted daughter, Genny 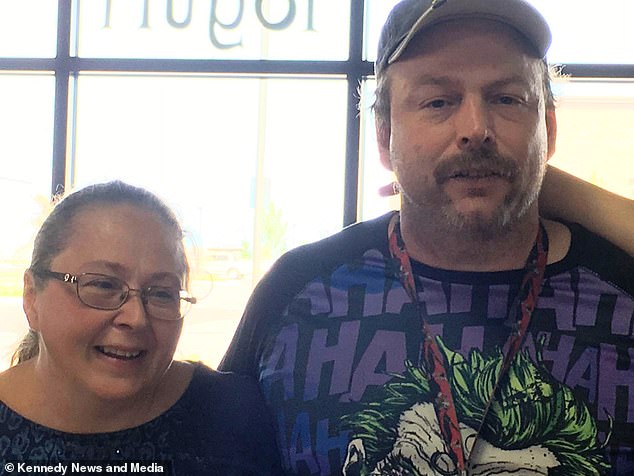 Sherri returned to her work as a support worker on September 1 and is preparing for a quiet Christmas, although Sarah will be travelling back from college.

‘Looking ahead it’ll be more of the same – continuing this until I can get the skin to stop stretching as much,’ said Sherri.

‘They tell me that it could be a year before my skin stops moving around.

‘The skin itself is healed but it’s still laying down scar tissue.

‘If I don’t continue to massage, it could mean the lose of movement in my arm, it could be the end of moving my head.

‘It could be that I can’t get my mouth open enough to brush my teeth or I can’t use the toilet myself.’