Unlike the rest of the world, Emma Donovan raced towards Melbourne when the shutters came down for the latest lockdown. The singer/songwriter of Noongar and Gumbaynggirr ancestry is the extraordinarily talented frontwoman for soul band the Putbacks. She has toured and recorded with the Black Arm Band, Archie Roach and Ruby Hunter, Yothu Yindi, Christine Anu, Jimmy Little and Paul Kelly, among others. 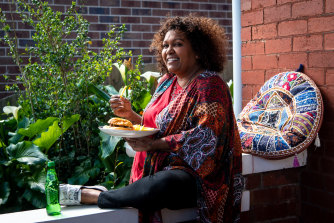 “When you mob had the first big lockdown, I came just after that,” she says. “There was a series at the Malthouse, that was the first Crossover gig.

“I was looking around for a place and thought if I get something, I’ll stay. It was pretty random, I’m pretty good at that!” she says with a laugh. “All my family are like, why are you going? Because I’m a single mum with two girls, even my dad said why are you going? It was a return for me; I lived here for years, then I went away and had my girls.”

Speaking via Zoom from her place in Preston, Donovan has ordered the Stateline burger with fries from Sycamore Meadows down the road; I have the Southern fried chicken burger from Essendon cafe Mister Walker, which I learn – only after ordering – is owned by the same company. You need a cheeky burger in lockdown, she says.

A solo parent with two daughters aged three and five, she has moved around in recent years. Her last home was in western Sydney and before that she spent time in Bunbury visiting her dad, a Yamatji man from Western Australia. Nambucca Heads on the mid-north coast of New South Wales, where her mum hails from, is another place she gravitates towards; her mother is of the Gumbaynggirr people.

Despite the lockdown, Donovan is glad she is here. Through the City of Melbourne’s Flash Forward program, designed to support the city’s music community, the Putbacks were one of the 40 artists commissioned to release an album this year. The band, as well as Donovan individually, has been nominated in a swag of categories at this year’s Victorian Music Awards.

“I think I made the right move. Melbourne is still it for me when it comes to my music. Look at all these opportunities … I feel lucky – this is my home, this is a beautiful community for musos. I love being back here.”

Her boyfriend, who she met just before lockdown, is a FIFO worker and away for six to eight weeks at a time. She has a social bubble with a friend who also has children; they meet regularly at the local park. Shopping at Preston market the other day, she ran into singer and friend Mo’ju. “I couldn’t help myself, I gave her a cuddle, I couldn’t believe how much it meant to me. I came home and I wrote heaps, I wanted to have a big cry.”

The Putbacks just released their third album , Under These Streets. Last year they released Crossover; the first was Dawn in 2014. Donovan is able to produce material quickly after years of writing in snatched moments on tour. Nowadays, it happens mainly late at night when her girls are sleeping.

“I’ve got into that exercise of just always trying to write and say something. I’ve got this cool little set-up now – it’s taken me forever to buy my own mic, it’s taken lockdown to get me to be a bit more serious and learn how to record – [I was] spoilt, see! This is my little space in the house, I sit around here at night and I just sing.” 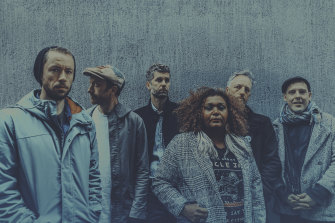 Emma Donovan and The Putbacks

Donovan joined the Putbacks in 2013, with Tom Martin on guitar, Rory McDougall on drums, Mick Meagher on bass, Justin Marshall on percussion and Simon Mavin on keyboards. She met and toured with McDougall and Meagher when they played with the Black Arm Band. To work remotely, they’ve created “the Vault”, an online system into which they pop ideas, recordings and tunes in progress.

Vocals have always been her main focus but she loves to write. “I’ve got to match that, if I’m gonna work with this mob. Sometimes it just works, it’s kinda like something I do now,” she says. “That’s how Dawn came about. I have lots of ideas and they have lots of ideas, but we try not to always do things the same way. We bounce off each other.”

Gospel music has been an intrinsic part of life for as long as she can recall: at seven she performed with the Donovans, a band made up of her mum, Agnes, and her five uncles. Her maternal grandparents, Micko and Aileen, also sang, and Micko wrote, including a track Outcast, Half-Caste, which as a kid she recalls not understanding. Now she is incredibly proud of it, knowing the power of stories told through song.

In rich teenage tradition, the adolescent Donovan didn’t want to sing in front of friends or family; the country-style outfits her mum lovingly made were a source of embarrassment. “I was shy kid, I didn’t like anyone knowing I could sing but you couldn’t deny it or get away with it because everyone wanted you to sing. Mum would say, ‘c’mon babe’ – she’d probably bribe me or something,” she says. “My mum would make me sing country. She wanted me to be a black Tammy [Wynette] or Loretta [Lynn].”

These days it’s another story: country music is a salve. Sitting behind her are two treasured trophies from Tamworth. “When mum discovered I could sing, I went every year.”

Family gatherings were always musical affairs and through them she learnt to harmonise: “I was always listening.” One of the things she misses most about not being able to travel is singing at significant family events; a special uncle died recently and she recorded something to send online, but it’s not the same.

When the world starts turning again, Donovan will perform with Paul Grabowsky in a show that revisits classic gospel songs like Old Rugged Cross and Sweet By and By. She’s also busy working on her next solo album, set for release this time next year.

An appearance on Play School during Reconciliation Week last year led her to devise several children’s songs in Indigenous language. I Can Sing a Rainbow and the nursery rhyme Once I Caught a Fish Alive and others will be recorded for ABC Radio Kids. She created these with help from her aunties, as she doesn’t speak her family’s Indigenous languages. “It’s a really cool thing to do because I never had songs in language.” 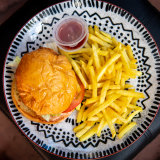 The Stateline burger and chips from Sycamore Meadows.Credit:Justin McManus

In her downtime, Donovan is a keen cook. Soup is one of her go-to dishes, including her speciality, kangaroo tail. She posts regularly on the Facebook page Mob Feeds, a site for Aboriginal and Torres Strait Islanders that has nearly 100,000 followers and a disclaimer warning: there will be occasional graphic images of bush food, kills, tofu and chickpeas.

“My nanas were singers but they were also big cooks. At a lot of the Aboriginal football knockouts, they’d be sweating it out doing these big dampers – I feel like I’m like them, even though there’s only three of us in the house. I’m sharing all these recipes on this Mob Feeds and then all the cousins are on there saying, ‘Oh, nan used to make them’.“

Music has been a solace in these strange days, especially old stuff, from early Archie Roach to her own material. “I have some old songs that I used to sing with mum. I’d play DJ. One of my big memories is of us singing in the car together. I’ve got these playlists that I play all the time: Ann Murray, Connie Francis, Loretta and Tammy … I’d probably listen to them once a week,” she says. “I’ve found myself looking at old photos, music, cooking. It’s all connected.” 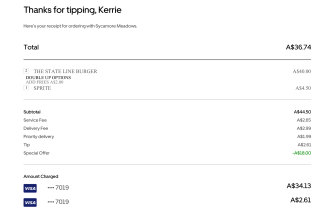 Receipt for lunch with Emma Donovan.

Connection is a big part of the conversation. Rather than talking politics, she prefers to focus on “those things that don’t divide us, things we can celebrate together”. Jessie Lloyd’s Mission Songs Project, which details Aboriginal folk songs from the missions from 1901 to 1967, is one example. Donovan sings on some of the recordings, including Outcast, Half-Caste.

Felix Riebl of Cat Empire, director of the Indigenous girl’s choir Spinifex Gum, is another. “I love things that are a mix of black and white, that’s the way I see it – brothers like Felix, this is his way of contributing, he wants to help share our story. He didn’t have to go to Roebourne [WA] to hear these sacred stories but he does and I love that.”

“You can learn a lot from what people are doing musically, it can make things fall into place and we can all celebrate it. They’re heavy songs but they’re songs we can share. I love it that music can be the meeting place,” she says. “That’s the thing that keeps me close to the Putbacks. Sometimes it falls into this whole thing and it’s not even about black and white, it’s about all these things that connect us.”

Under These Streets is out now on Heavy Machinery Records/Cooking Vinyl Australia. The Music Victoria Awards are announced on November 9.