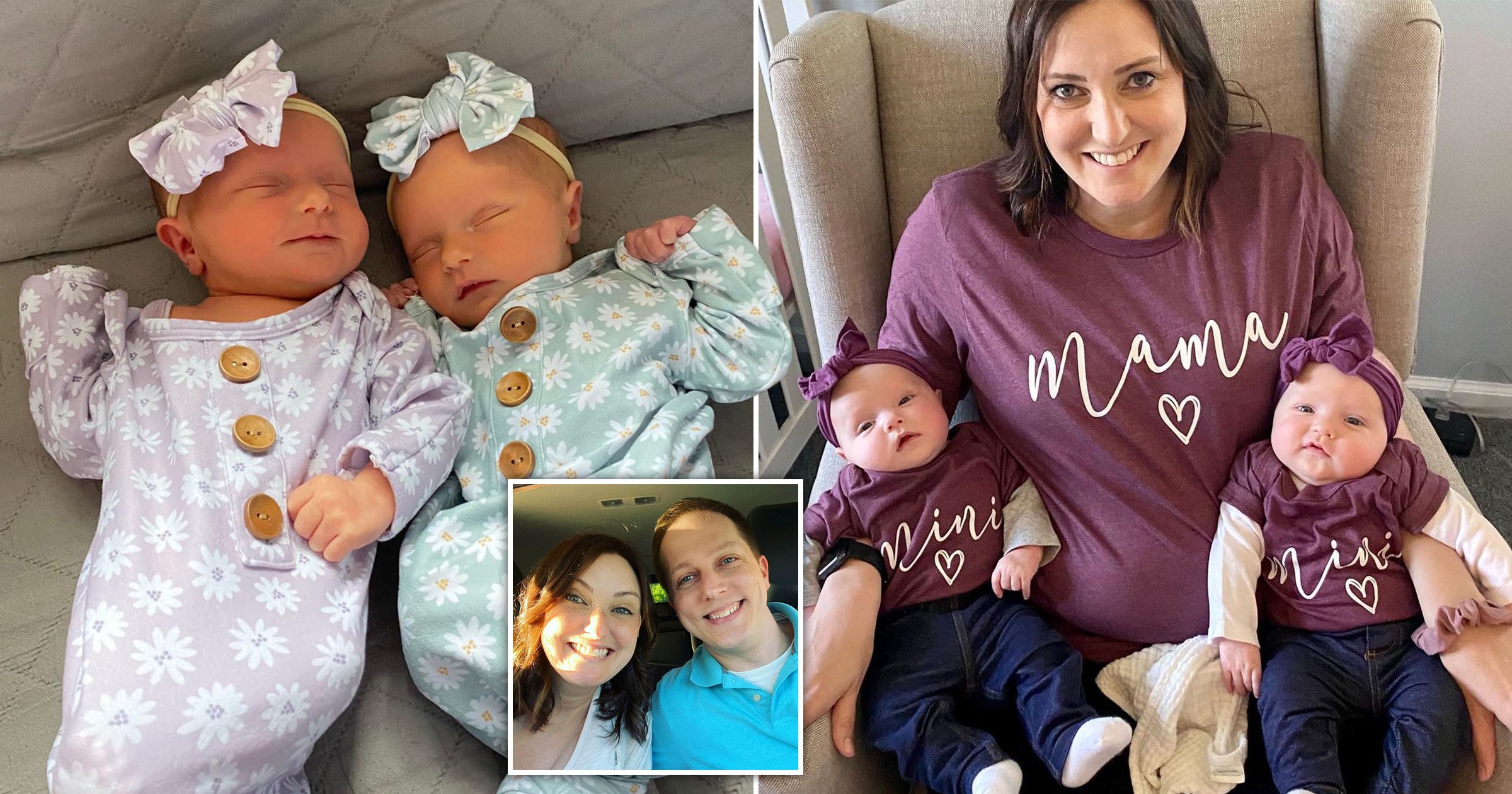 This unique family happened because Sandra managed to become pregnant using both a donor egg and her own.

That means her daughters were born on the same day and shared the womb, but are genetically half-sisters.

Sandra, 34, welcomed her children in February after trying to conceive for nearly four years.

She and her husband Jack, who’s the biological father of both the couple’s daughters, welcomed Eleanor Ann and Evelyn Louise after spending $26,000 (£21,000) on five rounds of IVF.

Sandra, a physician’s assistant from Rochester, New York, said: ‘We tried with my eggs for four rounds of IVF but I was told my eggs were very poor quality.

‘We were very lucky to get three full rounds of IVF covered by insurance, but they failed.’

The couple were left devastated when IVF didn’t work, and Sandra was ready to give up.

She said: ‘I wanted to stop every time, mentally it was so hard.

‘It was a big loss, I had named all of the previous seven embryos, chosen nursey themes and I was grieving for what could have been.

‘It was very hard, I went through all the stages of grief, being angry and asking why me?

‘I always said I couldn’t go through the pain of a failed round again, but I knew that never having a baby was worse and soon enough I would want to try again.’

Sandra and Jack spent around $20,000 on a fourth round using Sandra’s eggs paired with donor eggs – but again the couple were left heartbroken.

‘I had so much hope waiting for the test and then my stomach would drop every time,’ Sandra recalled.

‘I truly believed it would never happen for us.’

After four failed rounds, the couple decided to try one last time with a frozen embryo transfer at additional cost of $6,000, using the last of Sandra’s frozen embryos.

That last-ditch effort worked – nine days later, Sandra discovered she was finally pregnant… but that wasn’t the only surprise.

‘We found out at six weeks it was twins and knowing we had used one of my eggs and one donor egg, we knew then they would be unique,’ Sandra said.

‘They are fraternal twins and half-sisters with different biological mothers and the same father.

‘Some doctors we came across were blown away and every nurse we told was amazed.

‘We honestly feel so blessed and I will tell anyone who will listen our story.

‘When people ask are they identical twins? I love to watch their face when I say, actually no they are half-sisters, with two different mom genes.’

Sandra said both her and Jack know which daughter is biologically hers and it is not something they will keep from their girls.

Sandra said: ‘Just from looking at her, I know which daughter shares my genes.

‘I have very strong genes and it’s physically obvious, but we don’t make it known to people outside of our family.

‘However we will be open with the girls, it won’t be a sit-down serious talk when they are a certain age, they will grow up hearing about how they came to be our daughters and when they turn 18 they can search for the donor if they want to.’

Now Sandra and Jack are settling into life as a family of four.

The mum said: ‘It took 43 months, four egg retrievals, five transfers and 516 shots to have our daughters.

‘I am still in a state of surreal shock that these beautiful girls are mine.

‘They already love each other so much, they lock eyes and they light up when they see each other.

‘They are always babbling away to each other.’

Sandra is keen to share her experience in the hope it will help more women speak openly about fertility issues.

She said: ‘I love sharing my experience. My goal is to make infertility as normal to talk about as any other part of motherhood.

‘When I was going through it, I hated hearing people say stay positive, it will happen when the time is right or cheer up, so I don’t say those things.

‘I try to ask what do they need now – to vent, cry, shout? Don’t hide your emotions, but don’t give up.

‘We had to fight so long and hard but our daughters are worth every second of that journey.

‘So much went into making these girls, the pain, depression and anxiety, but they are worth every penny, every needle and the heartbreak of the failed cycles.

‘We are so happy to give them all the love we saved up, and so much more.’