A mumpreneur who quit her high flying corporate career to set up her own natural health brand has revealed how her turnover is set to double thanks to adding cannabis pills to her product range.

Mother-of-three Angelina Nizzardi, 44, from Bedfordshire launched Green Goddess in 2017, and its £120,000 turnover is set to  skyrocket to £350,000 over the next 2 months with the addition of CBD oil pills and sprays.

The products, launched last week, contain cannabidiol derived from the cannabis plant, which is said to help with issues such as anxiety, insomnia and inflammation.

Angelina works as a volunteer for Sue Ryder as part of their palliative care in the home team, and met a patient with a brain tumour who was taking CBD supplements on the advice of cancer specialists.

‘I saw first-hand the benefits and started reading any study I could get my hands on,’ Angelina explained.

‘I gave some to my husband who had been taking an anti-inflammatory prescription for his knees and he stopped all his medication.

‘Anxiety was a big issue for clients in my practice and when I shared the information about CBD and anxiety there was much interest and demand. My clients say the results have spoken for themselves. 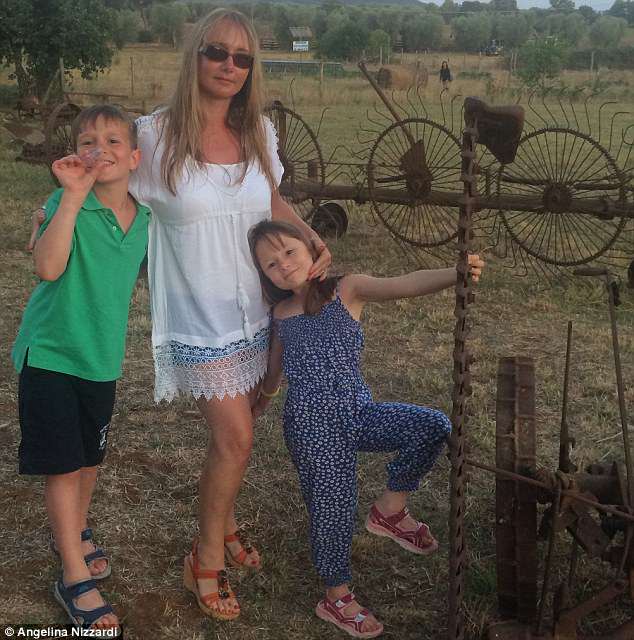 Mother-of-three Angelina Nizzardi, 44, from Bedfordshire launched Green Goddess in 2017, and has just introduced CBD pills and sprays into her product range 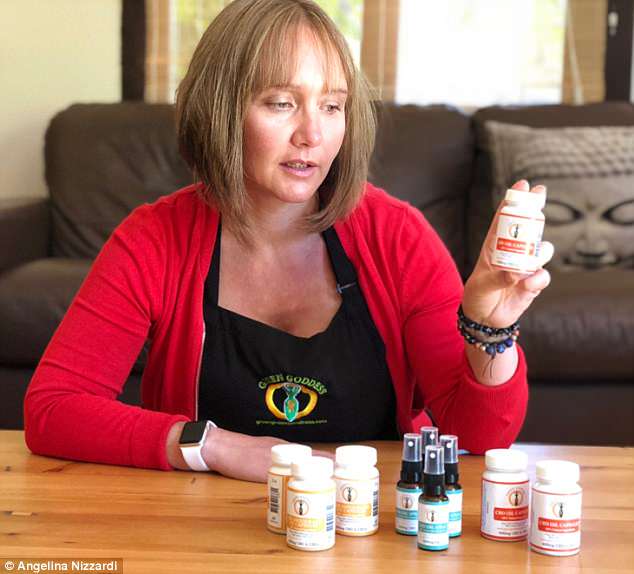 The entrepreneur became convinced of the benefits of CBD oil during her work as a voluteer for Sue Ryder as part of their palliative care in the home team,

CBD, which reportedly has no side effects, influences the release and uptake of ‘feel good’ chemicals such as dopamine and serotonin.

The compound has been credited with helping to relieve pain and stiffness, as well as aiding conditions such as anxiety.

CBD comes in many forms, the most popular being an oil – which users spray under their tongue – or gel tablets which melt slowly in the mouth.

Neither form contain THC – which causes the ‘high’ in cannabis.

WHAT IS CANNABIS OIL AND IS IT LEGAL IN THE UK?

Government advisers made it legal to buy CBD in 2016

Government advisers made it legal to buy cannabidiol (CBD) oil in 2016 after they admitted that it has a ‘restoring, correcting or modifying’ effect on humans.

However, the oil’s legal status has confused thousands across England and Wales, after the MHRA back-tracked on its position just weeks after.

Suppliers now have to obtain a licence to sell it as a medicine, following the decision in October two years ago – but some weave the strict rules.

Manufacturers are able to avoid regulation by selling it as a food supplement – ignoring the lengthy process of gaining a medicinal licence.

CBD oil, which can reportedly help with back pain, anxiety and epilepsy, has yet to be approved for use on the NHS in Scotland.

It comes in many forms, the most popular being an oil – which users spray under their tongue – or gel tablets which melt slowly in the mouth.

However, cannabis oil, which contains THC – the compound that gives users a ‘high’ – is illegal under UK laws.

But Billy Caldwell, from Castlederg, Northern Ireland, made headlines last April when he became the first Briton to be prescribed it on the NHS.

Cannabis oil, which reportedly has no side effects, influences the release and uptake of ‘feel good’ chemicals such as dopamine and serotonin.

Before she set up her business, Angelina was suffering from burnout as she tried to manage her high flying corporate career with raising her three children.

‘I was a commodities buyer for a global firm where the job involved managing large raw material budgets,’ she recalled.

‘After the birth of my second child I left to work for various media agencies on dedicated client contracts.

‘I thought this would give me more flexibility but the work was extremely pressured. I was working until 2am regularly to meet client demands and the work load escalated.’ 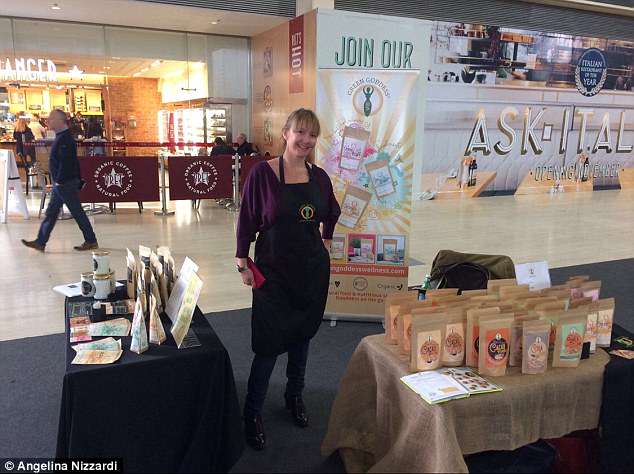 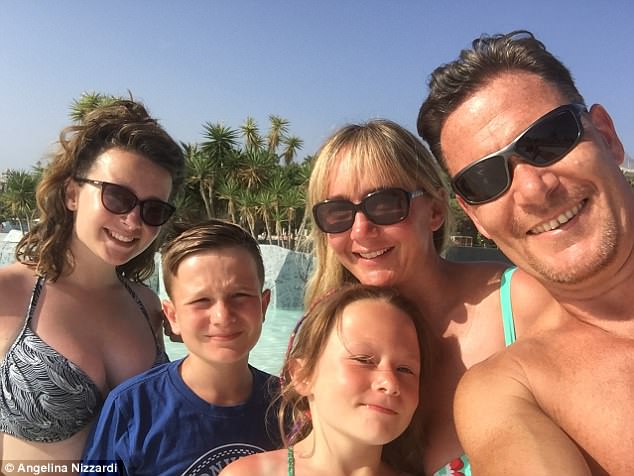 Angelina on holiday with her family. She suffered burnout while juggling the demands of her corporate career and

Angelina noticed her gruelling workload was having an in impact on her health.

‘I noticed my breathing had felt laboured for a while. I had stopped sleeping even when I could go to bed,’ she explained.

‘I lost so much weight and had no appetite. One day I was standing in the post office queue and felt like I couldn͛t breathe. It was so frightening.

‘After 10 years of juggling demanding workloads and three children my body just gave up. 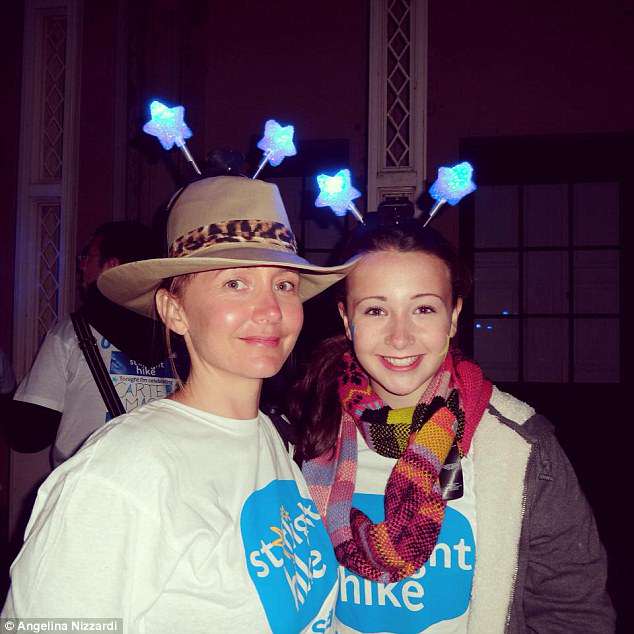 Taking part in the Sue Ryder Starlight Hike. Angelina became convinced of the benefits of CBD oil while volunteering with cancer patients

‘I went straight to the doctor who said I was exhausted, had chronic stress and was sleep deprived. He offered me a prescription, but I turned it down, went home and stopped working.’

Anglina immediately turned her attention to improving her physical and mental health in a bid to get her life back.

‘I studied mindfulness, practised yoga and attended meditation classes. The results were amazing,’ she said.

‘My diet and lifestyle completely changed. Nothing faddy, just simple natural foods and a balance of self-care that had been missing in my life.’

THE DIFFERENCES BETWEEN THC AND CBD

Tetrahydrocannabinol (THC) and cannabidiol (CBD) are both derived from the cannabis plant.

Together, they are part of the cannabinoid group of compounds found in hashish, hash oil, and most strains of marijuana.

THC is the psychoactive compound responsible for the euphoric, ‘high’ feeling often associated with marijuana.

THC interacts with CB1 receptors in the central nervous system and brain and creates the sensations of euphoria and anxiety.

CBD does not fit these receptors well, and actually decreases the effects of THC, and is not psychoactive.

CBD is thought to help reduce anxiety and inflammation.

Angelina also signed up for a coaching diploma specialising in wellness and advanced diploma in nutrition and, spending two years studying.

‘On completion I was a member of the National council of psychotherapists, Association for coaching and The Complimentary medical association and set up my own practice based from a building at home.

‘I had helped my husband start his business some years before so understood the fundamentals of a start-up. The client sessions in practice soon lead me to think about putting natural wellness products together.

‘Demand was high and I was making some wellness products at my kitchen table. At this point I decided to make it a proper part of the business. In 2016 Green Goddess was born.’

Angelina secured a place on an entrepreneurial acceleration program run by NatWest bank and spent 18 months creating the foundations of her business and putting together her product range of food supplements and natural beauty products.

She launched in early 2017, selling online and at wellness events and fairs as well as running workshops on sleep, stress and energy that spread the word about her  products.