More than 100 young artists, teachers and their relatives affiliated with the Afghanistan National Institute of Music, a celebrated school that became a target of the Taliban in part for its efforts to promote the education of girls, fled the country on Sunday, the school’s leaders said.

The musicians, many of whom have been trying to leave for more than a month, boarded a flight from Kabul’s main airport and have arrived in Doha, the capital of Qatar, according to Melbourne-based Ahmad Naser Sarmast. In coming days, they plan to resettle in Portugal, where the government has agreed to grant them visas. 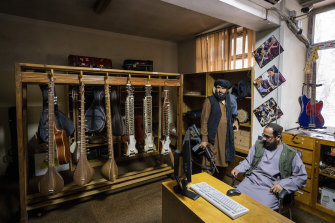 Fighters from the Haqqani network inside a room of the Afghanistan National Institute of Music in Kabul.Credit:AP Photo/Bernat Armangue

“It’s already a big step and a very, very big achievement on the way of rescuing Afghan musicians from the cruelty of the Taliban,” Sarmast, who opened the school in 2010, said in a statement. “You cannot imagine how happy I am.”

The musicians join a growing number of Afghans who have fled the country since August, when the Taliban consolidated their control of the country amid the withdrawal of US forces. Among figures in the arts and sports worlds who have escaped are members of a female soccer team who resettled in Portugal and Italy.

Still, hundreds of the school’s students, staff and alumni remain in Afghanistan and face an uncertain future amid signs the Taliban will move to restrict non-religious music, which they banned outright when they previously led Afghanistan, from 1996 to 2001.

The school’s supporters, a global network of artists, philanthropists, politicians and educators, plan to continue to work to get the remaining musicians out of Afghanistan. “The mission is not complete,” said Sarmast, an Afghan music scholar. “It just began.”

Yo-Yo Ma, the renowned cellist, helped raise awareness about the plight of the musicians among politicians and other artists. He said he was “shaking with excitement” by the news that some of them had escaped. 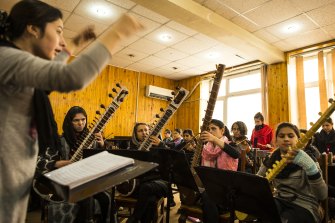 “It would be a terrible tragedy to lose this essential group of people who are so deeply motivated to have a living tradition be part of the world tradition,” Ma said in a telephone interview.

Of the musicians who remain stuck in the country, he said, “I am thinking about them every single hour of the day.”

The Afghanistan National Institute of Music was a rarity: a coeducational institution devoted to teaching music from both Afghanistan and the West, primarily to students from impoverished backgrounds. The school became known for supporting the education of girls, who make up about one-third of the student body. The school’s all-female orchestra, Zohra, toured the world and earned wide acclaim, and became a symbol of Afghanistan’s changing identity.

The school has faced threats from the Taliban for years, and in 2014 Sarmast was wounded by a Taliban suicide bomber.

Since the Taliban returned to power, the school has come under renewed scrutiny. Sarmast and the school’s supporters have worked for weeks to help get students, alumni, staff and their relatives out of the country, fearing for their safety.

Several students and young artists affiliated with the music institute said in interviews with The New York Times in recent weeks that they had been staying inside their homes, for fear of being attacked or punished by the Taliban. Many stopped playing music, hid their instruments and tried to conceal their affiliation with the school. They requested anonymity to make comments because of the fear of retribution.

In the final days of the American war in Afghanistan, the school’s supporters led a frantic and ultimately unsuccessful attempt to evacuate nearly 300 students, teachers and staff affiliated with the school, along with their relatives. The operation was backed by prominent politicians and security officials in the United States. At one point, the musicians sat in seven buses near an airport gate for 17 hours, hoping to get on a waiting plane. But the plan fell apart at the last minute when the musicians were not able to obtain entry to the airport and as fears of a possible terrorist attack escalated.

The Taliban have tried to promote an image of tolerance and moderation since returning to power, vowing not to carry out reprisals against their former enemies and saying that women would be allowed to work and study “within the bounds of Islamic law”.

But they have sent signals that they will impose some harsh policies, including on culture. A Taliban spokesperson recently said that music would not be allowed in public.

“Music is forbidden in Islam,” the spokesperson, Zabihullah Mujahid, said in an interview with The Times in August. “But we’re hoping that we can persuade people not to do such things, instead of pressuring them.”

John Baily, an ethnomusicologist at the University of London who has studied cultural life in Afghanistan, said it would be difficult for the Taliban to eradicate music in the country entirely, after years in which the arts have been allowed to flourish.

“You have got literally thousands of young people who have grown up with music,” he said, “and they’re not going to be just kind of switched off like that.”