“Mama, I don’t think I want to do art anymore.”

My entire world came crashing down with those words. My daughter, barely 10 years old and already one of the world’s youngest professional artists, just pulled the plug on an entire career that was supposed to be hers.

Everything had been going right. She had debuted her solo exhibition at Google, showcased her work in three countries, won award after award, held memberships in two professional artist organizations. She serves as an art ambassador to the Amazon Aid Foundation and Tomorrow’s Air﻿. The Cartoon Network included her in its celebration of Hispanic Heritage month last September. Telemundo came to our house to film an extended interview. NBC’s California Live did a piece; ABC 7 News aired a spot about her 6-foot sea lion statue at Pier 39 in San Francisco. More requests were coming in — but Aria Luna had had enough. She was done.

“Why?” something wailed inside me. “What went wrong? You’re just getting started!”

I remember the day Aria Luna came to me with her very first drawing ― two octopuses drawn in dark blue marker. I was as touched as any mama would be with her child’s first drawing but had no idea how far Aria’s talent would go. Just a year or so later, she drew a girl’s face with full, rich lips, textured and shaded with multiple colors of red and brown. She was 3.

Four years after that, Google hosted Aria’s first solo exhibition, a series of large-format mixed-media paintings telling the story of Bogo Mogo, the plastic monster, and the Guardians of the Sea battling him and protecting the ocean from plastic pollution. From there, things moved fast — more events, arts festivals, even a gallery exhibition were planned — and then COVID-19 shut them all down.

Undeterred, we pressed on, taking Aria Luna’s show on the virtual road. She did more events and appearances in 2020 than in the previous year, all of them online. Her paintings even traveled on their own, maskless, to France for an exhibition.

But the isolation of attending school remotely, being cut off from friends and extended family took its toll. Unlike all those artists who found a higher mojo in lockdown, Aria Luna’s inspiration withered. She missed her friends and classmates most of all. The mix of social isolation and a demanding school and work schedule pushed her off her balance beam. She stopped painting for several months.

An artist is not a gymnast. Even if you have natural talent for gymnastics, it still takes years and years of training and practice to get to the level of an Aly Raisman, Jordan Chiles or the GOAT herself, Simone Biles. If you have a natural talent for art, you don’t have to master a Yurchenko double brushstroke in order to be recognized. But your artistic “performance,” captured on canvas, paper or an electronic screen, does have to touch and inspire people’s hearts and minds — and that can be the result of five minutes, five months or five years of work. 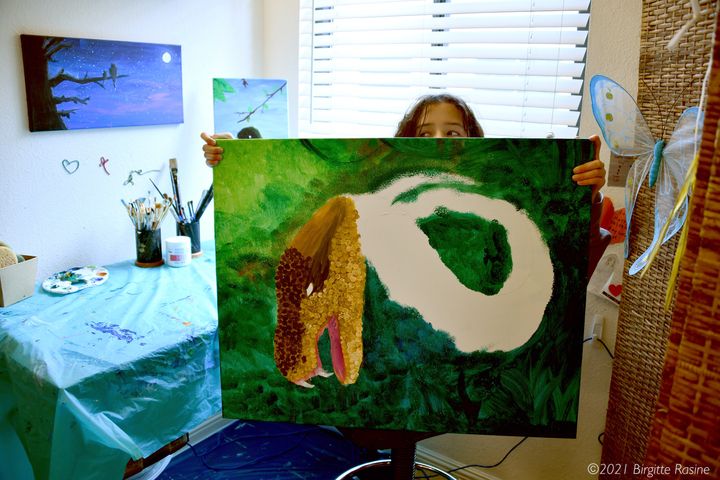 With art, it’s not about the perfection of skills as much as that subjective, intuitive, almost subconscious connection. Aria Luna’s art has that connection, that expressiveness, that emotion that just clicks. You can’t rationalize or explain it, but you can feel it. It feels like a special type of magic.

An artist is not a gymnast, and yet, in one profound way, the two are no different from each other than a musician is from a soccer player, or a chess master is from a swimmer. All fields that enable mastery require intense focus, dedication and that special spark ― that exceptional natural ability we call talent. You’ve probably heard any number of variations on the talent versus hard work theme… my favorite is Tim Notke’s “Hard work beats talent when talent doesn’t work hard.” That’s what I was trying to teach my daughter. Talent is a gift and a blessing; the work you put in to honor that talent gives you your reward.

That moment on Tuesday, when I read that first headline announcing Simone Biles was stepping off the Olympic stage, scream-pulled me back to that day earlier this year when Aria Luna said no more. In that silence that stretched itself fierce and long between her declaration and my response, I saw two roads roll out in front of me.

One roared: “Seize your power as the parent, the guiding force, the coach, the mentor! Don’t let your daughter tumble into the abyss of self-doubt! She is too young to know what she needs for success.”

The other spoke more softly: “Listen. Hear what she has to say.”

I chose to listen. Aria said she didn’t want to do more media interviews because “they’re always the same questions, and I have to say the same things over and over again,” she said, frustrated. “There are too many deadlines. It feels like too much pressure. I don’t just want to do art. I want to explore other things, too, like math, physics. Maybe I’ll invent something to help people.”

It struck me how differently children see the world. How much more simple, direct and brutally honest their perception is. As a grown adult author, I knew the media landscape well. I was a journalist early on in my career; I have also been on the other side of the mic, interviewed about my books and my work. I love public speaking, leading workshops, connecting with audiences. I had no issue with responding to the same questions over and over again because that’s how you get your voice heard. How can I help my daughter enjoy talking to the media, who are so clearly enamored with her talent?

When Naomi Osaka withdrew from the French Open, citing her own mental health, one line in the news articles stuck to me like thistle flowers: She didn’t want to talk to the media because she would experience “huge waves of anxiety.” 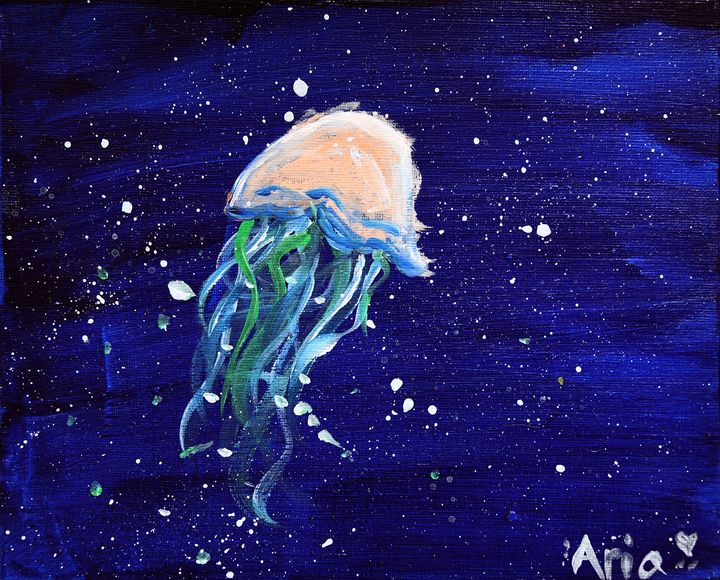 Looking back on Aria Luna’s media interviews, I could see that there was some of that. I had thought at the time it’s because some of the interviews were in Spanish, which she’s still learning. But now I saw what I was too busy to see before: She was feeling overwhelmed. When she finally said, “Mama, no more,” that discomfort had already bubbled over. And I saw that the only thing I could do, if I truly loved and believed in her, was to honor that wish and give her the space she needed. Because that magic she has, that mind-boggling ability to whip up a painting or drawing without planning, sketching or any sort of preparation, in a matter of minutes, cannot be forced. It cannot be scheduled, planned or outlined. It needs space — her head and heart-space, which is hers and hers alone. It’s a sacred space only Aria Luna inhabits, just as Simone Biles alone inhabits her sacred space.

This is why Simone’s decision to step off the mat rang so deeply and powerfully for me this week. Simone is an adult now. She is much more able to advocate for herself, make the calls that are best for her and have the wisdom and courage to withstand the intense public pressures to stand by her decision. It’s an extraordinary level of maturity to see in someone just 24 years old. This is a large part of what makes her the GOAT, the greatest of all time.

For someone who is also deeply gifted in their field but just 10 years old, that level of maturity and wisdom cannot be realistically expected. It is on us, the parents, teachers, coaches, guardians, to recognize the difference between our own ambitions for our children and what is best for their development, evolution, and success and personal happiness. To know them enough to respect them in their full and wondrous and unique individuality. To see the dangers lurking in too much success, too much fame, too fast. And to know when to step aside or redirect the professional path of the emerging star so they can continue to shine for the long term.

When I heard my daughter say, “I don’t just want to do art,” my ego interpreted it as the end of her artistic career. But when I listened, her message was much louder, clearer and broader than I could have dared imagine. In addition to art, she also happens to have an outstanding musical ear, she sings, has taught herself piano, excels in math and has taken it upon herself to learn Japanese. For me to insist she focus exclusively on her visual art would be madness. Who am I to imagine what her life should be? Let her wow the world with all of her talents the way she wants to, on her time.

The scale of Simone’s achievements is far more global and legend-breaking than Aria Luna’s string of pearls, as I call her accomplishments, but it’s not the scale that matters. It’s the volatile dynamic of talent versus pressure, fulfillment versus expectation. NBC host Mike Tirico said it best in a recent newscast: “The hardest thing to do in sports… is win when you are supposed to win, and everybody says you’re supposed to win.” I can’t think of any competitive or creative profession this statement doesn’t apply to.

Those of us enjoying the fruits of our athletes, artists, musicians, scientists and other thinkers, creators and innovators experience their talents the easy way. We’re not in the gym or the pool eight hours a day. We’re not in the studio working our fingers to the bone. We’re not twisting our neurons into impossible knots trying to crack the code of a new technology. We get the cake when it’s baked.

And we wonder why the chef sometimes needs a break and walks out of that hot kitchen.

It’s heartwarming to see the level of support and love pouring forth from the international community for Simone, from her coaches and fellow athletes, celebrities, other public figures and her fans because it means we as a society are starting to understand. We’re starting to see just how intense the pressures on our super-creators really are and what we can collectively do to give back some of that love that they’ve been pouring out for us with all of their energy, talent and hard work.

For one thing, we can dial down the pressure to win gold, to be the highest-ranked at all times, to have the most money, the most followers, the most expensive cars, the biggest houses. We can enjoy the talents of our creators for what they are and how they inspire us, not for their medals or titles. But the easiest and most important thing we can do, especially as the parents and coaches of the younger generations now coming up on the heels of the Simones and the Naomis, is listen. When I quieted my own mind and listened to Aria Luna, I realized that my challenge and purpose are not just to support my daughter and her talent. My challenge is to learn and evolve along with her. My purpose is to fly with her, without forcing her wings.

I asked Aria Luna what she thought of Simone leaving the Olympic competition. She looked at me, shocked at first at what had happened. Then she shrugged her shoulder.

“She can do whatever she wants,” she said. “Whatever people say doesn’t matter. It’s her life.”

“And in case you’re wondering… Aria Luna is painting again.”

Birgitte Rasine is a literary author, publisher and a former journalist for the Hollywood trades. Her first novel is “The Jaguar and the Cacao Tree” (because she’s a hopeless chocoholic). You can follow her on Twitter at @birgitte_rasine and Aria Luna on Instagram at @aria.luna.art.

Do you have a compelling personal story you’d like to see published on HuffPost? Find out what we’re looking for here and send us a pitch.