With a string of roles in hit TV dramas, she’s proving her disability is no barrier to success- yet in this moving interview actress Genevieve Barr reveals…My mother said learning I was deaf was worse than when she had cancer

Every actor knows how to draw on real-life experiences for a role. Genevieve Barr is talking about the reverse — how a part helped her prepare for a momentous chapter in her own life.

The role was as a deaf and mute mother-to-be in Call The Midwife, who communicates in sign language during labour and has conflicting emotions about her baby. Will the child be born hearing, or deaf?

The character, June, is torn, knowing that either way she will never be able to converse with her baby. 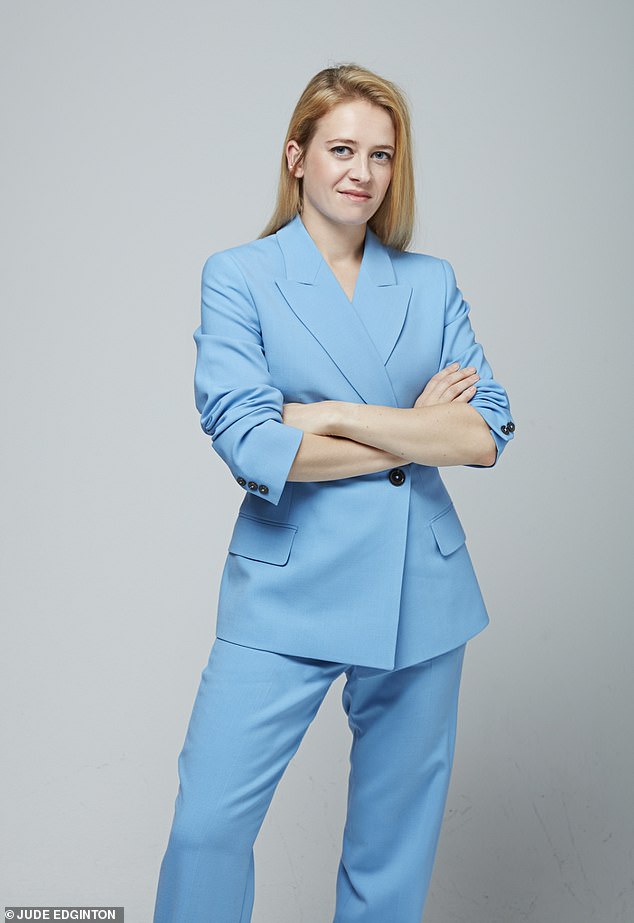 Actress Genevieve Barr (pictured), 33, has revealed that when her mother was diagnosed with breast cancer a few years ago she confided something that left Genevieve reeling

Although the 33-year-old has been deaf since birth she’d never learned sign language, so an expert was drafted in. Five years on, she is a mother. Her little boy is one year old. She says that television trial run was good preparation for his arrival.

‘I spent a lot of time when I was pregnant thinking about whether he’d be deaf or not. I was so nervous when they did the hearing tests.

‘But because of Call The Midwife I’d thought about it. I knew that, if anything, I’d be at an advantage if the baby was deaf — since it would be a shared experience.’

Her little boy is not deaf, as it happens, which brings a new set of concerns. She says now her biggest worry is whether she can keep up with his speech development.

A hearing aid gives her a certain level of amplification, but around 50 per cent of her communication comes from lip reading. Tricky with toddlers.

‘I did worry I wouldn’t be able to fully understand him. I listen to other toddlers and I have no idea what they are saying — they flummox me. But hopefully because I’m there with him at every stage, picking up on every sound as it happens, it will be different.’

There are other challenges, which may not be immediately obvious. Genevieve has a vibrating baby monitor, for instance. But it’s her son who is her greatest ally, although he doesn’t yet know — or care — that his mother cannot hear.

‘He’s quite a pushy, bossy child. If he feels I’m ignoring him, he will push my legs, or come right up to my face. He’s good at getting my attention.’

Despite being able to hear, he will grow up with subtitles on the TV. ‘I can’t lip-read the cartoons,’ she laughs. ‘So he is going to be stuck with the subtitles.’

Genevieve is used to taking challenges in her stride. She was pregnant when she was offered the part of Debbie Kethin in The Accident, and so had to stop breast-feeding the day before filming started.

Difficult timing, but the job was one she simply couldn’t turn down.

Debbie lives in a close knit town, her husband has died in a construction accident which has hit the community hard and there are questions over whether he was to blame. 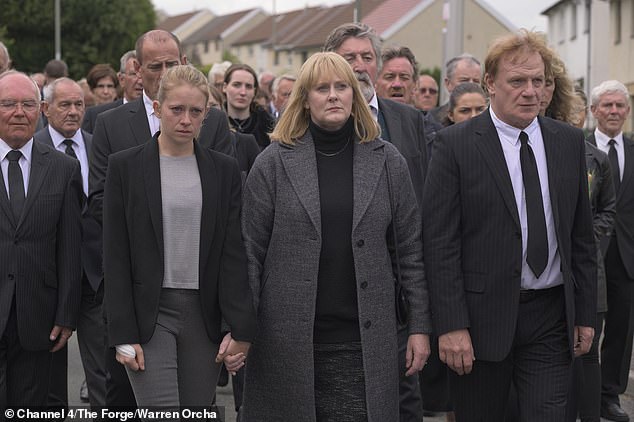 Most of her major acting jobs before had been playing characters whose deafness was necessary for the plot (she made her BBC debut in the critically-acclaimed The Silence in 2010, playing a deaf teenager who witnesses a murder). This part is different.

Her character Debbie Kethin is deaf, but she didn’t need to be for the purposes of the story — the show’s creator Jack Thorne simply wanted Genevieve to have the part.

Interestingly, if there were ever going to be barriers in her way in the acting world, it wasn’t because of her inability to hear.

Rather, the issue has always been about her speech. ‘It’s the first thing people notice,’ she says.

Her voice is recognisably that of a deaf person — slightly nasal and sometimes muffled. It is not a voice we are used to hearing on TV.

‘You just don’t hear voices like mine in the media,’ she agrees. ‘Rarely on TV. Never on radio. I think that’s terrible. I’d like us to be in a position where hearing a deaf voice is normal, just like hearing another accent.’

How much she should strive to sound ‘normal’ (by which we mean like a hearing person) is quite the conversation point today. 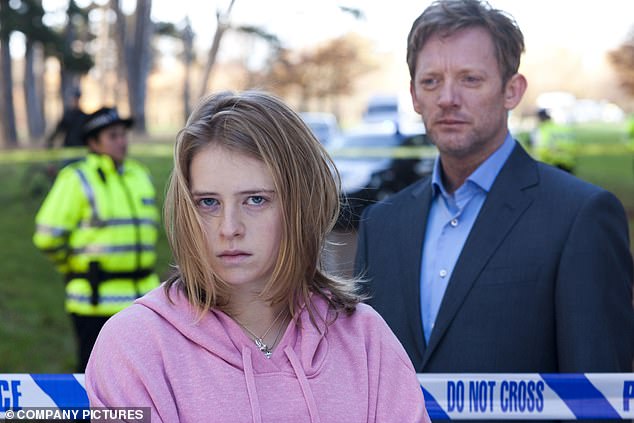 The actress (pictured in The Silence) questioned how the physical trials and fear that go with having cancer could be remotely equivalent to being born deaf?

For most of her life she has had speech therapists. Until five years ago she had a voice coach, who sadly died. Since then, she hasn’t worked with a replacement. ‘It’s a difficult one,’ she says.

‘How can I put this? Me working with a voice coach isn’t like an actor working on an accent they can drop after a particular job. For me it’s a lifelong thing. But there’s a careful balance to be had.

‘Yes, I have to work to improve my voice, so the public can understand what I’m saying, but I also need a healthy mentality about it. If I aspire to sound just like a hearing person, that suggests I can’t accept myself for who I am — and the deaf identity I have.’

So working on her voice to the point where people cannot tell she’s deaf would be selling out? ‘Yes, I think so. It suggests I should be ashamed of my voice, and that’s wrong.’

Genevieve never set out to be an actress but fell into the world when a friend, who had written a screenplay with a deaf character, asked her to help out — and she was smitten.

It was an easy first break, which — rather sweetly — she sounds apologetic about. She worries that she got the part because she was deaf. ‘Some people could call it opportunistic, but then again I wasn’t going to let it go. When things come your way you have to go with it, with every fibre of your being.’

From childhood, Genevieve was a high-achiever. The eldest of four siblings, she grew up on a farm near Harrogate (‘let’s face it — the most middle-class, most white, most privileged place you can get’).

Her father Robert is a company director, working in the travel and transport industries and her mother Caroline is a writer.

They were floored when they were told their firstborn was profoundly deaf. ‘It’s weird, as an adult who is deaf, when your parents talk about how distraught they were that you were born deaf. I think about it now and wonder ‘was it that bad really?’.’

A few years ago, her mother was diagnosed with breast cancer. In a conversation about the diagnosis, she confided something that left Genevieve reeling: that receiving the news that her baby was deaf was more devastating than the news she had cancer.

‘It struck a nerve,’ Genevieve admits now. ‘How could the physical trials and fear that goes with having cancer be remotely equivalent to being born deaf?’

Yet the way her parents dealt with her deafness was extraordinary. The family didn’t know any other deaf people (‘there weren’t any — other than old people’) and she grew up very much in a ‘hearing world’.

‘My parents’ attitude was very much ‘you are deaf, but it doesn’t matter. You will just have to work harder than everyone else, but hard work is good for you’. They tried hard to create a safe space for me to be happily deaf.’

There are varying theories on how to raise a deaf child. Some recommend the use of sign language over speech. Other experts push learning to listen as a priority, before trying to speak.

Her parents thought she needed to speak to fit into a hearing world, so her mum spent endless hours talking to her with an inflated balloon held between them, so she could feel the vibrations of her speech.

‘My mum used to sing nursery rhymes, and I’d mouth the words back. I learned that moving the lips was a form of communication long before I learned that there was sound behind it.’ Sign language was never part of the picture.

At school, she was academically gifted (a straight-A student, she went on to study English at Edinburgh University). She was also sporty.

At 15, she represented England at rounders, At university she was lacrosse captain, and played for the Scottish national team. She met her husband, Alex, on the rugby pitch.

‘Disability, what disability?’ some might say. It may be the approach she was brought up with, and one that has served her well, but her attitude has since grown more complicated.

‘Disability is still not a spoken-out-loud thing in this country, and I think it should be,’ she says. ‘When I was growing up it was always a little bit slipped-under-the-table.’

Her voice falls to a whisper: ‘Oh she’s deaf; she’s disabled’. I think the more I met other deaf people, the more I had to renegotiate what being deaf meant.

‘It wasn’t about saying ‘I am deaf’, and parking it. It was about demonstrating that you can have a disability and have it be a fascinating positive thing. I’ve come to appreciate how proud the deaf community is. It’s who you are, who I am.’

Her biggest gripe is when her deafness is presented as a problem to be solved. ‘It’s not. People who live with a disability don’t want to see themselves as struggling, but as thriving.’

People who live with a disability also want to see themselves represented on screen. ‘We’ve had this struggle in terms of gender and race, but we are still fighting it in terms of disability.’

Surprisingly, the Oscar winner lists are awash with big names who have played characters with a disability to acclaim — such as Dustin Hoffman, Tom Hanks and Daniel Day Lewis.

‘The statistics are amazing,’ she says. ‘If there is an Oscar nominee who is playing a disabled character, they are more likely to win. But something like 80 per cent of disabled characters are played by actors who are not disabled.’

Does she think such characters should only be played by disabled actors, then?

‘No — but I think there should be a level playing field.’

She does, however, think we’re making progress. ‘I’m not sure I’ve broken through the glass ceiling,’ she says.

‘But perhaps I’m nudging it. At least my head is against it.’

The Accident is on Channel 4 tonight at 9pm.