Naomi Campbell’s gone back to her South London roots

Why Naomi’s gone back to school: She blazed a trail for diversity in fashion – Now, as she reveals her uncle was knifed to death, Naomi Campbell’s gone back to her South London roots to inspire a new generation

She is notorious for her lateness — reputedly keeping photographer David Bailey waiting for three days — but this week she was a paradigm of well-mannered promptness.

In fact when Naomi Campbell, one of the world’s most celebrated supermodels, arrived at a South London state secondary school — attended by her make-up team, publicist and bodyguard — she was, despite the early hour, five minutes early.

Naomi, 49, moving with lissom grace, stepped out of her black SUV into dazzling sunshine to inspire a group of the school’s pupils — many from ethnic minorities — with a talk about the redemptive power of education, the importance of perseverance and her own triumph over racial prejudice.

Her visit marked a return to her modest South London roots. ‘I feel I’m coming home,’ said Naomi, who, along with Christy Turlington, Claudia Schiffer, Linda Evangelista and Cindy Crawford, were the original ‘Big Five’ supermodels who changed the face of fashion in the late 1980s and early 1990s. 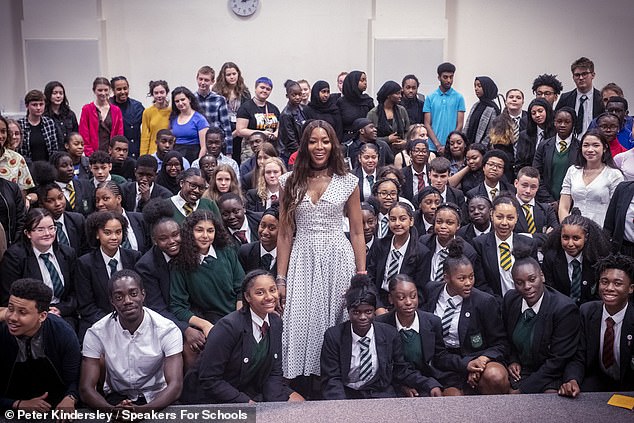 Blazing a trail for ethnic diversity, she appeared on the cover of British Vogue in 1987, the first black woman to do so for two decades. She was also American Vogue’s first black cover model, in 1989.

Returning to Lambeth where she was raised, the only daughter of a teenage single mum, Naomi also spoke about the growing threat of knife crime, revealing publicly for the first time that it claimed a relative’s life.

‘Knife crime leaves my heart so heavy because one of my uncles died that way when I was child,’ she said in an interview at a London school, to which the Daily Mail was given exclusive access. ‘It’s such a violent act and comes from such a disturbing place.

‘I don’t consider myself an authority on knife crime. But I do know I don’t like violence. Why would you want to pick up a knife and risk going to prison? Why would you want to end up there? Prison isn’t good for anyone. I don’t think it works anywhere in the world,’ she said, to a rapt silence from her ethnically diverse audience.

Naomi is the latest in a string of luminaries donating their time to Speakers For Schools, an organisation set up by broadcaster Robert Peston, to bring inspirational speakers from all walks of life into state schools to share their experiences.

Heston Blumenthal, Mariella Frostrup, Lord (Melvyn) Bragg, and Professor Brian Cox are among the 1,300 influencers on the roster.

The Elmgreen School, a secondary in West Norwood, is a world away from the glamour of Naomi’s professional life — earlier this month she posed naked for Vogue in a Kenyan desert. But in the bustling assembly hall, she was at ease, speaking with calm authority. 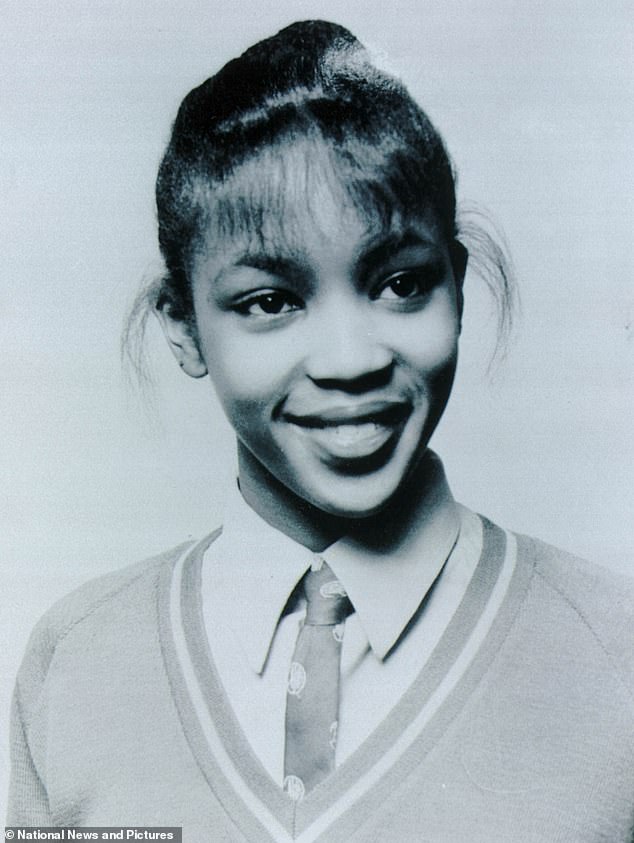 Naomi (pictured as a teenager in her school uniform) who was discovered by a model scout at age 15 while shopping in London’s Covent Garden, has experienced racial discrimination throughout her career

Luminously beautiful in a white Azzedine Alaia dress, Naomi was back where she had begun life. Born and schooled in nearby working-class Streatham, she was discovered by a model scout at 15 while window-shopping in London’s Covent Garden. At 16 she made it on to the cover of Elle and two years later became the first black model to grace the cover of the French edition of Vogue.

Her mum Valerie, to whom she remains close, is a one-time showgirl and model. At Valerie’s request, Naomi has never sought to find her absent father.

The racial discrimination she faced in her career was striking: she was famously supported by white pals Turlington and Evangelista who told the fashion house Dolce & Gabbana, ‘If you don’t use Naomi, you don’t get us.’

Today, she says: ‘I was fed up of being the token black girl, tired of it. I’ve remained optimistic that we just have to keep on talking about diversity until other people get it.

‘Since I started out I’ve seen big differences in the fashion business, in magazines and advertising, and that’s great. One thing I keep on saying and will continue to say is diversity is not a trend. It’s a way of life, and that’s how it should be.

‘The other mission is that a person of diversity should get the exact same promotion as someone blonde and blue-eyed.’ 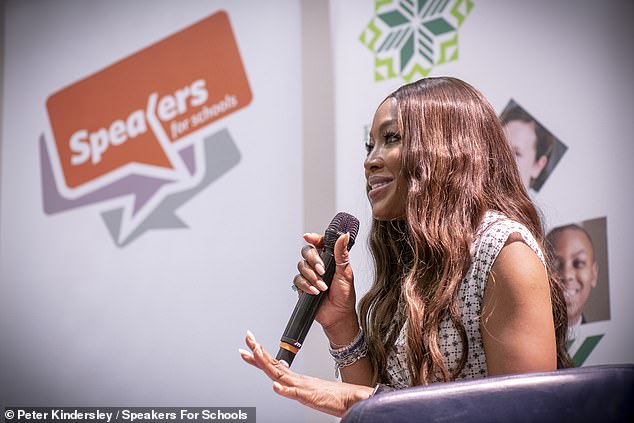 Naomi knows, too, about professional rebuffs but insists they can be used to your advantage. ‘There’s no such thing as a setback, because if you embrace rejection — don’t take it to heart and question why it happened — you learn from it. I’ve been working since the age of five so I’ve built up a resilience to rejection.

‘It didn’t faze me if I went somewhere and they said: “Oh, no, you’re not right for the job.” I’m here to prove that you should never take no for an answer, that you can triumph over rejection.’

Naomi also issued a rallying cry to her predominantly black audience, to celebrate their ethnic origins: ‘There have been many times I’ve walked into a room and I’ve been the only black person in it. I never felt ashamed of it. I would never want to change that. I am very proud of my roots and it means a lot for me to be here today for that reason. I wanted to give back to where I come from.

‘When it comes to opportunities it doesn’t matter where you’re from. You’re still going to face the same challenges. It’s about how you deal with them. Being a woman of colour you face preconceptions. But today I’m optimistic about how we are perceived.’

She stressed, too, the importance of education in driving the change in young lives. ‘I believe people can change through education. Those who want to learn will learn. If you want to play around at school, that’s up to you.

‘Your destiny is in your own hands. If you have the drive to succeed, you will. I’m not saying it’s easy but you can get what you want if you really go for it.’ 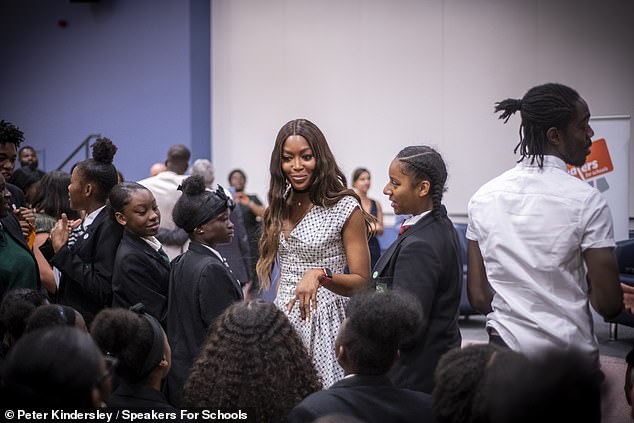 Perhaps her most abiding message was one of perseverance. For Naomi, who faced the bigotry of an industry that often failed to recognise people of colour, the motto is: never give up.

‘I’ve fallen down many times,’ she said, ‘but I get back up, and that’s nothing to be ashamed of because we are supposed to fall down. That’s what we did as babies. We learn each time we fall. That’s how we get wiser.’

But this week her tone was both conciliatory and measured.

‘Success is being able to give back and be of service,’ she told pupils. ‘The fact I can sit here and do this, meeting the next generation and speaking with them, is the meaning of success to me.’

In a swipe at the ephemeral world of fame, she celebrated the virtues of hard work and application. ‘I can’t stand that word “fame”!’ she cried. ‘It makes people do the wrong things for the wrong reasons. 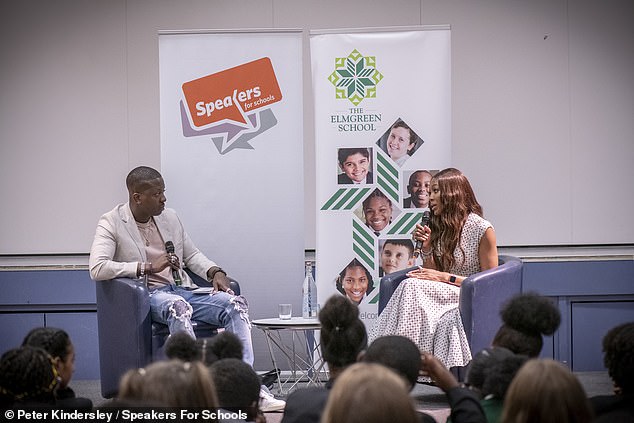 The supermodel (pictured right at Elmgreen school) who was called an ‘honorary granddaughter’ by Nelson Mandela, says she continues to feel Nelson’s presence daily

‘I learnt along the way how to do it, and that it’s very important to be your authentic self in everything that you do.’

Despite the hot temper that marked her early success, many of those who have worked with her counter this, saying she lights up rooms with her charm.

Nelson Mandela, who called her his ‘honorary granddaughter’ when she visited him in 1994, was won over. She, in turn, says the influence of the great man, who died in 2013, prevails, and she senses his guiding hand from beyond the grave.

She explains: ‘I feel Nelson’s presence every day. Many things about him still come into my memory, and it’s confirmation that I’m doing things in the right way.’

She is both keenly aware that her status gives her influence and honest enough to concede she cannot wield it indiscriminately.

‘When Edward Enninful was made the first black British Vogue editor-in-chief, everyone was asking if he was going to put me on the cover first, and I was like: “Of course he can’t do that, and I wouldn’t expect him to because of our friendship.” ’

Perhaps it is telling that in a career that has seen her rub shoulders with the great and the good, the person she reveres most is her mother. ‘She’s my inspiration,’ says her daughter.

So how would Naomi sum up her glittering career? ‘Colourful, blessed and grateful,’ she smiles.