For people who live with relatively rare medical conditions, half of the battle, aside from dealing with symptoms, is getting a doctor to listen to them. That’s what happened to Tori Foles, who is raising awareness for postural orthostatic tachycardia syndrome, aka POTS. Foles, like potentially millions of other Americans with (POTS), has a body that doesn’t like gravity. That’s how one doctor described to CNN the symptoms Foles deals with on a daily basis, including pervasive lightheadedness, "profound" fatigue, and gastrointestinal problems. Another doctor told CNN POTS is "the most common condition you’ve never heard of," which is one reason some people, Foles included, struggle to get diagnosed.

So, what is POTS? The syndrome is a kind of "autonomic dysfunction," which simply means that the autonomic nervous system (which is responsible for unconscious bodily functions, like breathing or digestion) isn’t working right, according to the Mayo Clinic. For people who live with POTS, that means that suddenly sitting upright or standing can cause an increased heart rate (tachycardia), which can lead to fainting. POTS can develop after an illness or a traumatic injury, or even after pregnancy, according to the Cleveland Clinic. Management strategies can vary from using compression stockings, to exercise, to cognitive behavioral therapy for pain management. Some forms of POTS go away on their own; others do not. There is no cure.

Awareness around the syndrome is crucial to helping the many people who live with POTS, both diagnosed and undiagnosed. The Mayo Clinic’s current estimates suggest that between 1 and 3 million Americans have the syndrome. According to a survey about POTS done by Vanderbilt and the University of Calgary, most folks who have POTS see an average of seven different doctors, and spend an average of four years trying to be diagnosed. The survey also found that more than 75 percent of patients were told the symptoms they were seeing were psychological, not physical, and 25 percent of patients were actually treated for a mental illness prior to being correctly diagnosed with POTS, CNN reported.

One reason for the lack of swift diagnosis? The fact that POTS is way more common in women — 70 to 80 percent of people who develop POTS are women between the ages of 15 and 50, according to MedicineNet — and gender bias in medicine often means that doctors don’t always take women’s symptoms seriously.

Even for Foles, whose POTS symptoms significantly impact her life, getting a diagnosis took much longer than it needed to. Foles, who is married to Super Bowl MVP Nick Foles, wrote in a blog post that she began to develop symptoms including "fatigue, nausea, gastrointestional issues and dizziness on my feet" when she was 23 years old. "I ignored them for weeks, brushing them off as fatigue from work and the hot summer," Foles wrote. But she began to take her symptoms seriously when she nearly passed out behind the wheel of her car.

She immediately went to the doctor, but the doctor’s check-up is part of what caused her to be misdiagnosed for so long, for one simple reason: He checked her vitals while she was sitting down. As Foles wrote in her post, "[S]omeone with POTS can fool you [nine] times out of 10 with their perfect vitals while they are sitting down," since it’s the act of sitting or standing up that triggers the symptoms of POTS. 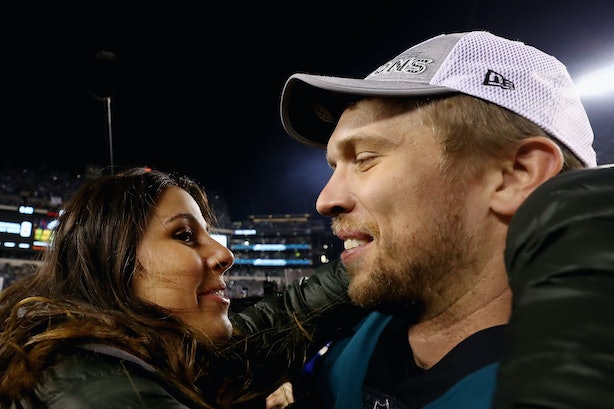 The doctors who initially examined Foles asked if she’d considered depression or anxiety as causes for her symptoms, which is a common experience for many people who struggle to receive a diagnosis for a not-very-well understood condition. "As someone with no history of these problems and with the sudden onset of symptoms I was experiencing, it did not add up," Foles wrote. "I am pretty sure [that] just about every young woman, in their pursuit to find their POTS diagnosis, has been told they are dealing with anxiety and depression just because they feel anxious and sad. Why wouldn’t they feel anxious and sad when their body is not functioning properly […]?"

Experts told CNN that further awareness is necessary, "because so little is known about why the autonomic nervous system malfunctions. Symptoms vary from person to person, and may be triggered by a wide variety of underlying diseases and conditions." For folks who believe they may have POTS, the vital diagnostic criteria for POTS you should know are, according to CNN, a heart rate increase of 30 beats per minute within 10 minutes of standing, paired with an "absence of orthostatic hypotension."

There’s a larger conversation to be had here about the fact that women consistently struggle to be diagnosed with serious problems. There is evidence to show doctors take women’s pain less seriously than that of men, and women who have POTS being consistently misdiagnosed as having a mental illness rings uncomfortably of women in the past being diagnosed as "hysterical." But with women like Foles coming forward to tell their stories, hopefully some folks who may have POTS but weren’t aware of this little-known syndrome will finally be able to get the diagnosis and treatment they need.