History’s sauciest It girl! New book reveals the lascivious life of Lady Melbourne – who had so many affairs only ONE of her six children was fathered by her husband

An explosive new book promises to lift the lid on one of history’s sauciest characters.

High society It girl Lady Melbourne rocked Georgian society with a string of lovers – including the Prince of Wales.

So salacious were the extra-marital affairs of Lady M, known as Elizabeth Lamb, that she had six children – including Queen Victoria’s favourite prime minister Lord Melbourne – but only one was fathered by her husband, Sir Peniston Lamb.

Lady Melbourne’s fourth son, George, who was born in 1784, was almost certainly sired by Prince George, the Prince of Wales, who later became George IV. 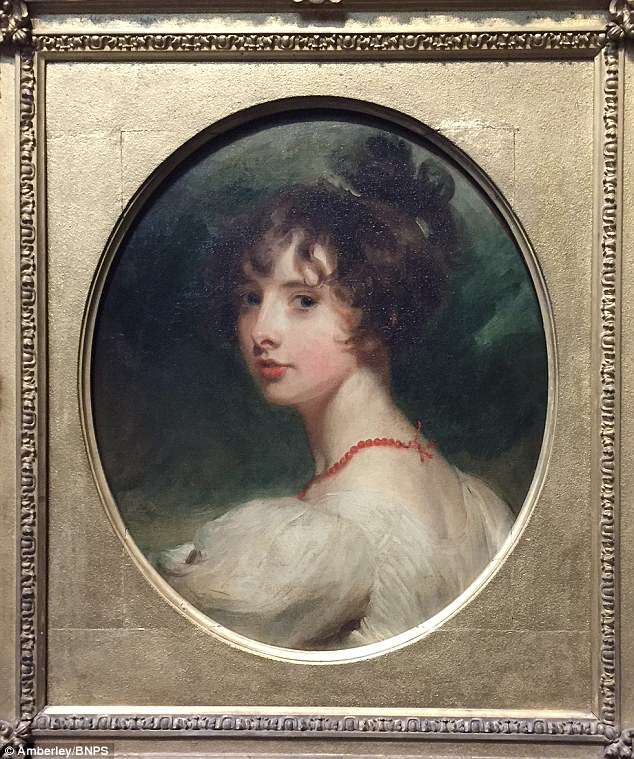 A new book reveals the very interesting love life of Georgian It girl Lady Melbourne, who sought retribution against her cheating husband Sir Peniston Lamb by taking a string of lovers, including the Prince of Wales 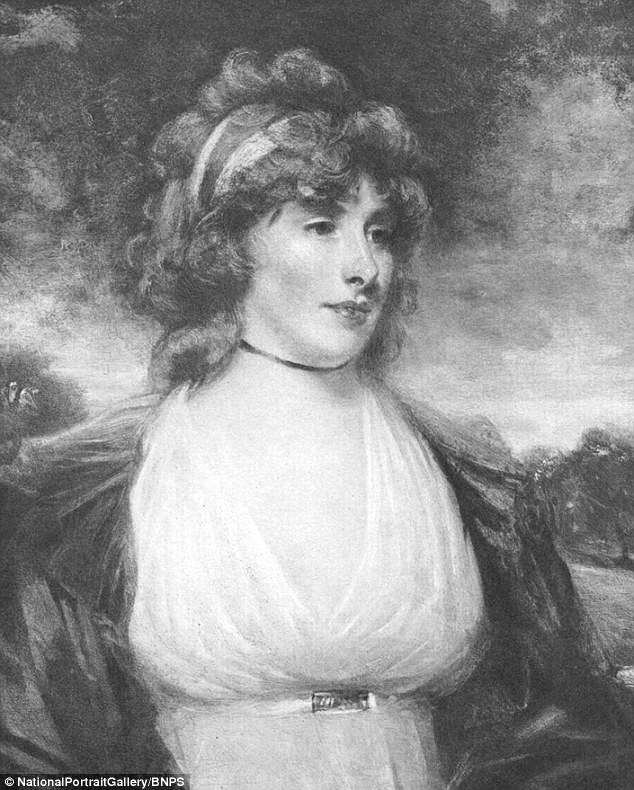 A new book Lady M: The Life and Loves of Elizabeth Lamb looks at the men in the aristocrat’s life including the Prince of Wales, George Wyndham and Francis Russell, the fifth Duke of Bedford

Her other daughter, Harriet, is believed to have been fathered by another lover, Francis Russell, the fifth Duke of Bedford, in 1779.

Only Lady Melbourne’s first son, Peniston, was fathered by her husband Sir Peniston Lamb in 1770.

Lady Melbourne’s many affairs led to her portrayal, together with the society celebrity Georgiana, the Duchess of Devonshire, and the artist, Anne Damer, as one of the three witches from Macbeth.

She was compared to the vicious, scheming Marquise de Merteuil, the siren in Les Liaisons Dangereuses who used seduction as a social weapon.

The disapproving society diarist, Lady Mary Coke, noted: ‘I daresay they think their charms more irresistible than all the magic of the witches.’

But her influence was unquestionable – her parties at Melbourne House in Piccadilly were attended by Whig leader Charles James Fox and other prominent figures – and she had her admirers. 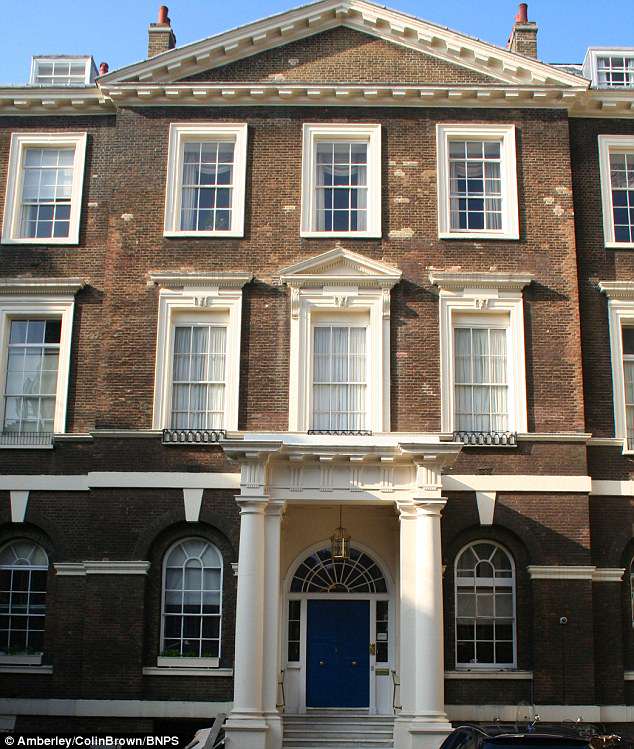 The scene of the crime? Melbourne House in Piccadilly where Lady M might have entertained gentleman callers 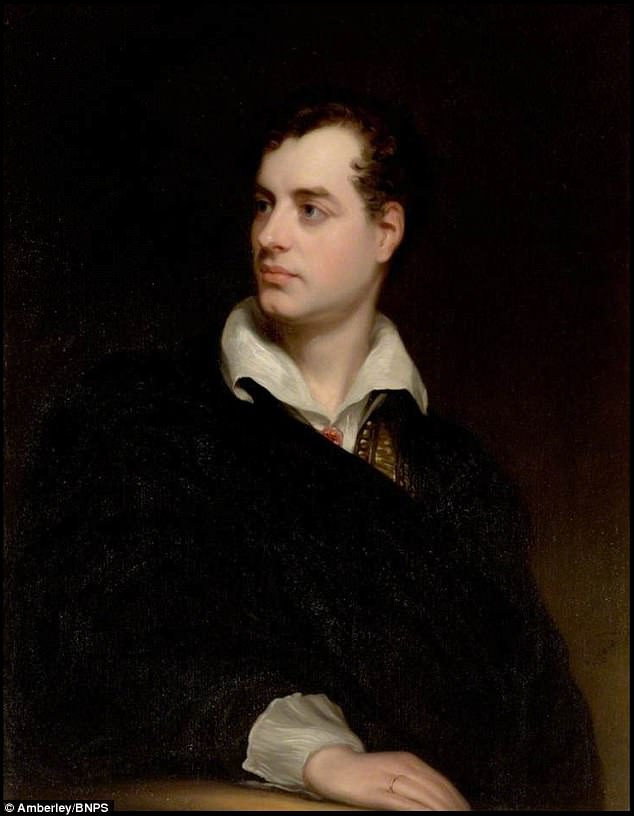 Powers of persuasion: Lady M persuaded Lord Byron to marry her niece, Annabella Millbanke, after her daughter-in-law Caroline Lamb became so obsessed with the poet that it was feared her melodramatic behaviour might harm her son, Lord Melbourne’s political ambitions Lord Melbourne, who went on to serve as Home Secretary and Prime Minister…and enjoyed a close friendship with Queen Victoria 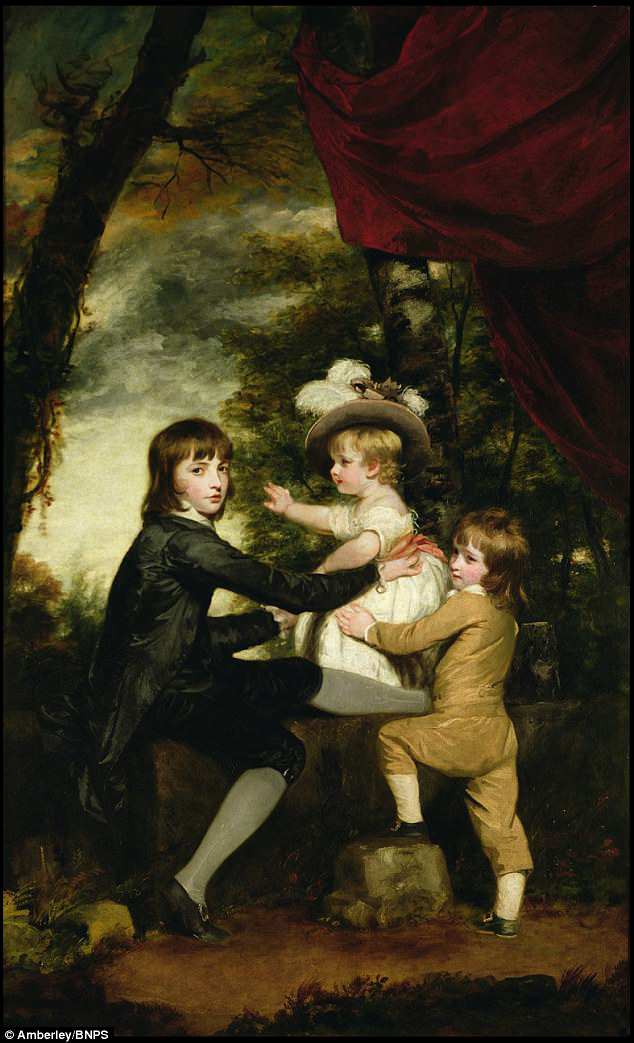 Awkward: This painting shows three of Lady and Lord Melbourne’s children…however Lord M refused to buy the oil on canvas because he believed he hadn’t sired two of the three children

Her contemporary Nathaniel Wraxall, in his book Historical Memoirs of My Own Time, labelled her ‘a commanding figure full of grace and dignity, an animated countenance, intelligent features, captivating manners and conversation’.

Colin Brown’s new book Lady M: The Life and Loves of Elizabeth Lamb, Viscountess Melbourne, is the first biography of Lady Melbourne and coincides with the 200th anniversary of her death.

Lady Melbourne was just 17 years old when she married Sir Peniston, who had inherited an estate of £1million, in 1769.

Months later, she was expecting her first child. During the pregnancy, Sir Peniston began an affair with the glamorous cortesan and actress Sophia Baddeley, paying her £200 for a session.

The affair was exposed in a kiss and tell memoir by Sophia’s friend, Elizabeth Steele.

But when Lady Melbourne and Sophia came face to face at a ball she smiled, getting even with her cheating husband by conducting a series of affairs with wealthy aristocrats.

Like many noblemen from that era, Sir Peniston was prepared to adopt the offspring from other men as his own in return for social rewards.

It is no coincidence, Mr Brown says, that Sir Peniston was given a royal post as Gentleman of the Bedchamber and the promotion to the Viscountancy the same month her son George was conceived. 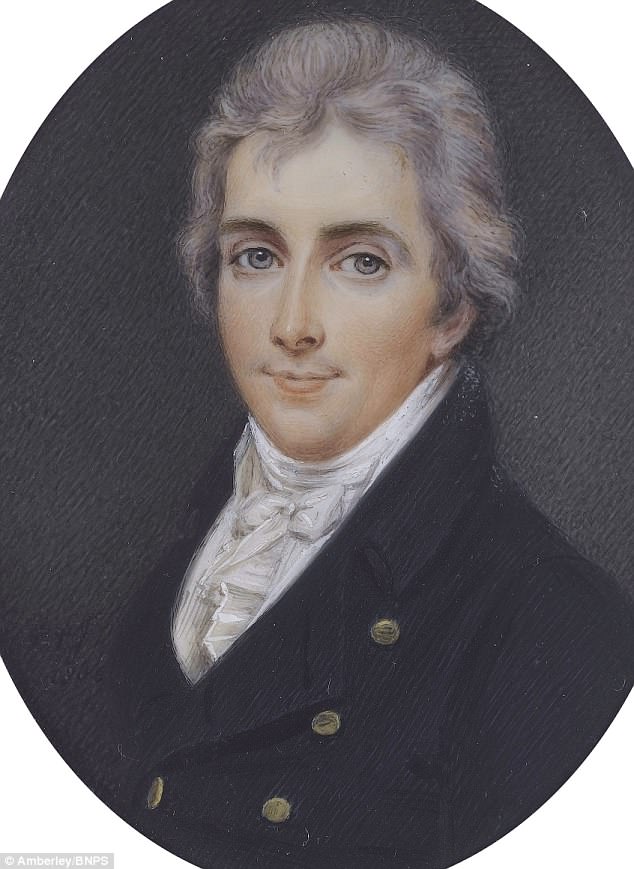 Sir Peniston Lamb, Lord and Lady Melbourne’s first son was likely to be the only child of Lord Melbourne…despite the couple raising five others 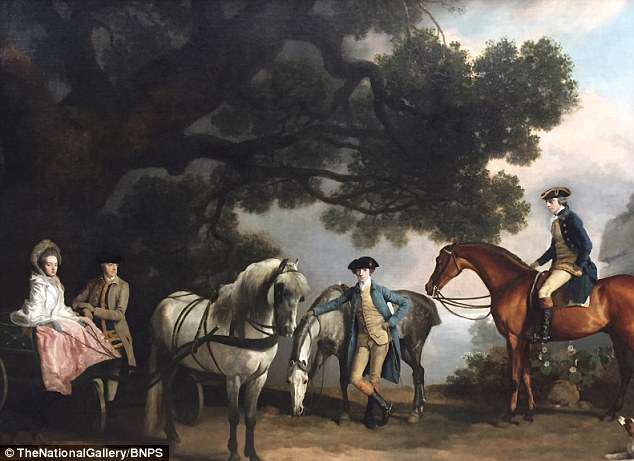 A oil painting dated 1769 depicts the Milbankes and the Melbournes on a riding expedition, with a solemn-looking Lady Melbourne

The Prince of Wales was the boy’s godfather and attended his christening, and he and Lady Melbourne remained life-long friends.

Mr Brown, former political editor of the Sunday Telegraph and Independent on Sunday, has uncovered letters sent by Georgiana to her mother which confirm William, who served as prime minister between 1834 and 1841, was conceived at Cock’s Heath military camp in Kent in 1779.

The camp was notorious for the number of illicit liaisons taking place between the officers and the ladies who followed the soldiers to the camp.

Some ladies, led by Georgiana, appeared in specially-made tight-fitting uniforms each morning to watch the men parading and fighting mock battles.

After hours, they indulged in sex with the officers, camp followers and even local tradesmen.

Lady Melbourne enjoyed liaisons there with Lord Egremont, who is rumoured to have fathered 70 illegitimate children, but left the camp when she discovered she was pregnant.

The secret slipped out in a letter Georgiana wrote from the camp to her mother, who disapproved of Lady Melbourne.

She wrote: ‘You must not mention this as it is rather a secret her being with child. 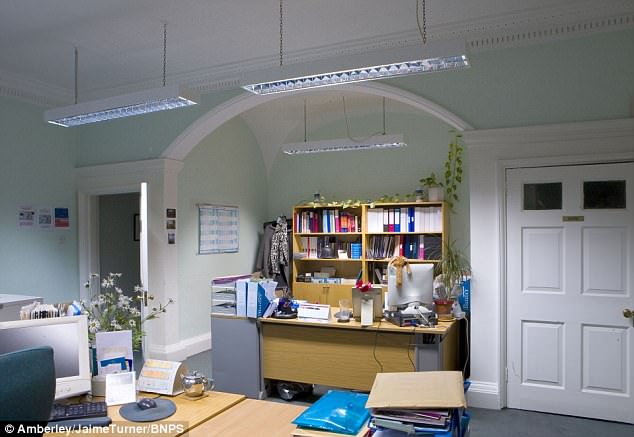 Office romance! Lady Caroline Melbourne’s bedroom now in the house where she once lived

A lover’s gift: The painting at the end of the dining hall at Brocket Hall was given to Lady Melbourne by the Prince of Wales, one of her rumoured lovers

‘I conjure you my dearest Mama to forgive my warmth about Lady M today but I do assure you that every thing I have known of her has been so right and her conduct to me so friendly and for my good that I was miserable to see her so low in your opinion.

‘I hope you will not object to my continuing a friendship which it would be so terrible for me to break off.’

Georgiana later had a disastrous affair with the young Charles Grey, later prime minister Earl Grey, and secretly gave birth to his daughter in exile on the Continent.

Her travails were brought to the big screen in the 2008 film The Duchess where she was played by Keira Knightley.

Lady Melbourne’s ruthless streak came to the fore when she attempted to have her daughter-in-law, Caroline Lamb, declared ‘insane’ to save her son’s political ambitions.

Caroline had been married to William Lamb for seven years when she became besotted with celebrity Romanticist poet Lord Byron. The explosive new book is out now, published by Amberley and priced at £20

When he ignored her advances, she was prone to melo-drama and once slit her own wrist with a broken glass at a grand ball to demonstrate her hurt.

Lady Melbourne, fearful these outbursts were tarnishing her son’s political reputation, used her powers of persuasion to convince Lord Byron to marry her niece, Annabella Millbanke, instead.

And she then went one step further, asking a doctor to declare Caroline ‘insane’ so her son could be rid of her.

The extent of the relationship between Lord Byron, who was 24 years old, and Lady Melbourne, then aged 61, is unknown.

But he clearly fell under her spell, describing her as ‘the best friend I ever had in my life, and the cleverest of women’, even gushing ‘when I do see a woman superior not only to all her own [sex] but to most of ours [men] I worship her’.

Mr Brown suspects they may have been lovers before Lord Byron fled the country when rumours spread about his incestuous liaison with his half-sister Augusta Leach.

Lady Melbourne developed an opium addiction in her final years and died aged 66 in April 1818.

She was buried in the Melbourne vault inside St Etheldreda’s Church in Hatfield, Herts.

Author Mr Brown, 68, from London, said: ‘Lady M was shrewdly calculating, entertaining, ‘mannish’ in her attitude to sexual affairs, sympathetic without being sentimental and a good listener who was interested in what men had to say; but above all, she was discreet.

‘She used sexual favours as a means to advance her family to rank alongside the Devonshires, the Spencers, the Ponsonbys and the Hollands.

‘She lived by the unwritten rule that a married woman in Georgian society had a duty to produce an heir for her husband to protect his family’s inheritance, but after that a woman was entitled to have affairs while her husband followed his own peccadilloes.

‘In an age of strong women, Lady Melbourne was an influential confidante for the politicians of her day, but Lady M was much more than a Georgian agony aunt.

‘She was a political player in her own right at a time when women not only did not have the vote, but also could not hold public office.’

Lady M: The Life and Loves of Elizabeth Lamb, Viscountess Melbourne 1751-1818, by Colin Brown, is published by Amberley and costs £20.