Music, at its most cerebral, is a reflection of the world in which it is conceived; a mirror to the society it is sprung from. In Arcadia Winds’ final 2019 performance at the Recital Centre, the focus lay on this context: specifically, on the landscape of each composers’ life. It told stories that, true to the concerts’ title, reflected a multitude of voices – old, new, recorded, imagined, intellectual, of-the-earth. 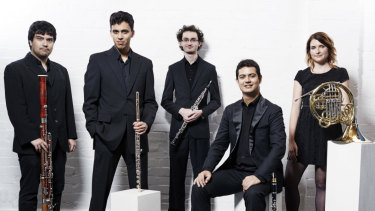 It began, chronologically-speaking, in the middle, with Steve Reich’s Vermont Counterpoint: a minimalist work for amplified flute and tape, evoked with great style by the ensemble’s flautist, Kiran Phatak.

The meditative piece and its ever-evolving, regenerating landscape gave way seamlessly to a polished rearrangement of Bach’s Trio Sonata for Organ.

Moving quickly back into the present, two world premieres followed: the first from Cayn Borthwick, the second by Andrew Ford.

Borthwick’s Three Pieces demonstrated a persuasive compositional voice, with an excellent eye for colour and pacing, and a firm understanding of the complexities of the wind quintet.

Andrew Ford’s new work … was the highlight of the night: an articulate, thoughtful meditation on our changing landscape.

Finally, Ford’s new work, Scenes from Streeton – commissioned in celebration of the Recital Centre’s 10th Anniversary – was the highlight of the night: an articulate, thoughtful meditation on our changing landscape.

The five artists on stage were joined by recorded voices speaking about several Arthur Streeton paintings of Australian scenes, made between 1889 and 1896, and highlighting the extreme droughts of the period. One voice described the works as warscapes and as the land became drier in the paintings, Ford matched this urgency in the music, turning the wind quintet into an instrument for change, a battle cry.

This was an artful, provocative work that deserves to be heard again and again. A very fine recital from some of Australia’s best-emerging artists.