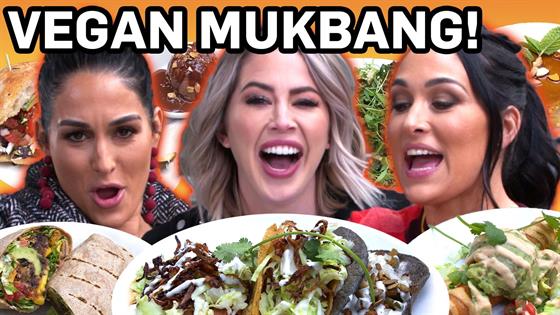 The Bella Twins have their game faces on in this buffet-style honesty hour hosted by Dating #NoFilter‘s Kelsey Darragh. Much like last week’s video—which had Kristin Cavallari and Jay Cutler chowing down on rattlesnake, boar and python—this one sees Nikki Bella and Brie Bella similarly getting into the mukbang spirit. (And, of course, doling out more than a few zingers while they’re at it.) Originally popularized by vloggers from South Korea, mukbang is the increasingly global Internet trend that’s prompted an outpouring of food-related videos online.

Plus, “You’re gonna eat a whole thing of chips,” Nikki warns the restaurant’s future patrons. “I have.”

Carrying out the mukbang tradition in perhaps the most appropriate way possible, the trio’s conversation proves to be about as vibrant as the food.

“I want to hear about how your dating life is going,” Kelsey asks Nikki, who Total Bellas audiences know has been coming into her fearlessly single status all season. And while the WWE star doesn’t reveal a whole lot, she does admit she’s “definitely been exploring” and is “taking applications” for a potential new boo. Better polish up those resumes boys!

Brie’s love life quickly becomes fodder for the gals’ quippy exchange, too. And that’s probably for the best, since it sounds like the Bella twin needs some clarification regarding the logistics of a particularly ironic work-life balance metaphor, given the backdrop.

“You [and Bryan] have the perfect scenario,” Kelsey says first. “You and your husband met through work.”

“Yeah, but I didn’t think it was perfect at first,” Brie admits of her and fellow WWE wrestler Daniel Bryan‘s relationship. Why’s that, exactly? “‘Cause I was like, you can’t really sh-t where you eat, right?” she laughs. “Or eat where you sh-t?”

After mulling it over for a few seconds, Nikki confirms: “You don’t wanna do either. I don’t wanna eat sh-t or sh-t where I work.”

Thankfully, neither scenario plays out at lunch. See which delicious vegan-friendly dishes come highly recommended by the Bellas and indulge in even more totally appropriate mealtime chit-chat in the clip above!

Watch a brand new episode of Total Bellas Sunday at 9 p.m., only on E!