A nomadic couple who quit their jobs to seek adventure, have revealed how they customised their home on wheels – complete with double bed, bathroom and its very own projector for watching Netflix on the beach.

Harriet Evans, 28, and Josh Wycherley, 26, who met seven years ago while working at an adventure camp in Hindhead, Surrey, found even this unconventional nine-to-five role restricting and longed for a life on the open road.

Keen to see the world, at the end of 2018, they bought a van from classified advertisement site Gumtree and spent six months transforming it into a mobile home. They hit the road in May 2019 and visited 18 countries, before it conked out beside an Italian motorway.

Undeterred, during a visit to the UK in August 2019, they fixed it up and traded it in for their current bigger and better model. They took odd jobs to save up, with the intention of driving off again in April, only for the Covid-19 pandemic to put the brakes on their plans. 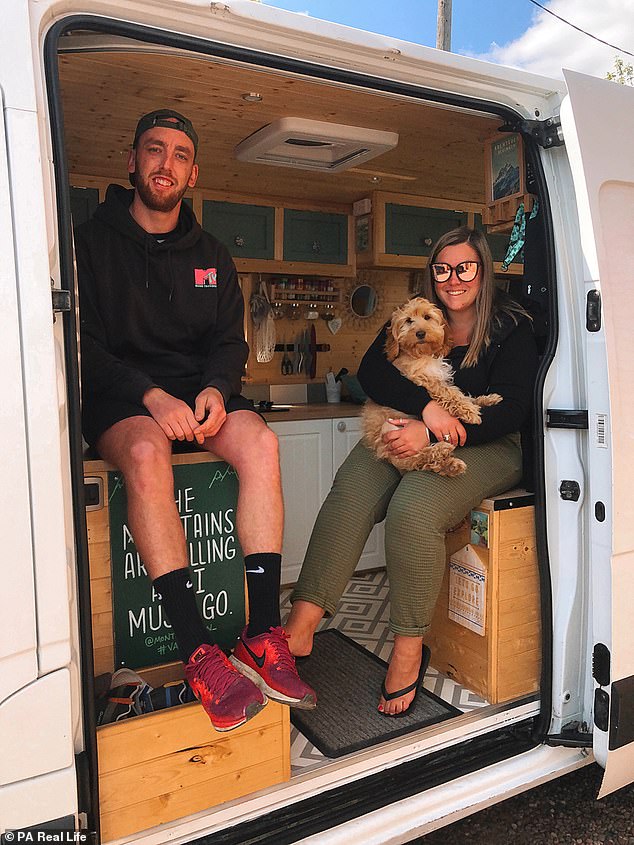 Josh Wycherley, 26, and Harriet Evans, 28, (pictured) have customised a van they brought from Gumtree to travel across Europe 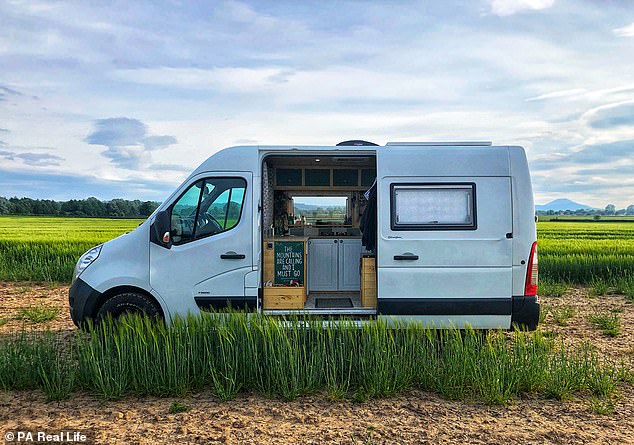 Josh and Harriet who met while working at PGL seven years ago, had a desire to create their own adventure. Pictured: Harriet and Josh’s second van once it had been renovated

But former officer worker Harriet explained that nothing will hold them back for long.

She said: ‘Josh and I are at the age now where a lot of our friends are settling down, having children and getting mortgages, so there is part of us that sometimes thinks, ‘Are we doing the right thing?’

‘But the amazing freedom that comes with van life far outweighs that. Aside from right now, while travelling is on pause, we can go anywhere we like.

‘If we don’t like somewhere, we simply move on, or change direction. There’s something about waking up every day without a plan that’s really liberating.’

Harriet who is originally from Portsmouth, Hampshire, and Josh, of Telford, Shropshire, first met back in 2013, after landing jobs at PGL – an adventure camp specialising in school trips, activity holidays and outdoor education, requiring employees to live at the Surrey centre.

Spending a lot of time together, they forged a tight bond and soon became a couple.

But, while they loved their active jobs, which offered plenty of variety, they still had itchy feet to create an adventure of their own.

Josh said: ‘After a few years, we just thought, “What are we doing?”. 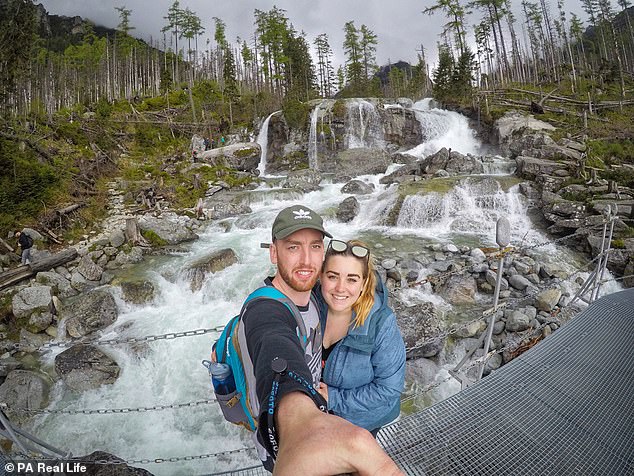 Josh explained that they wanted to see the world, because there has to be more to life than their daily grind. Pictured: The couple in Slovakia 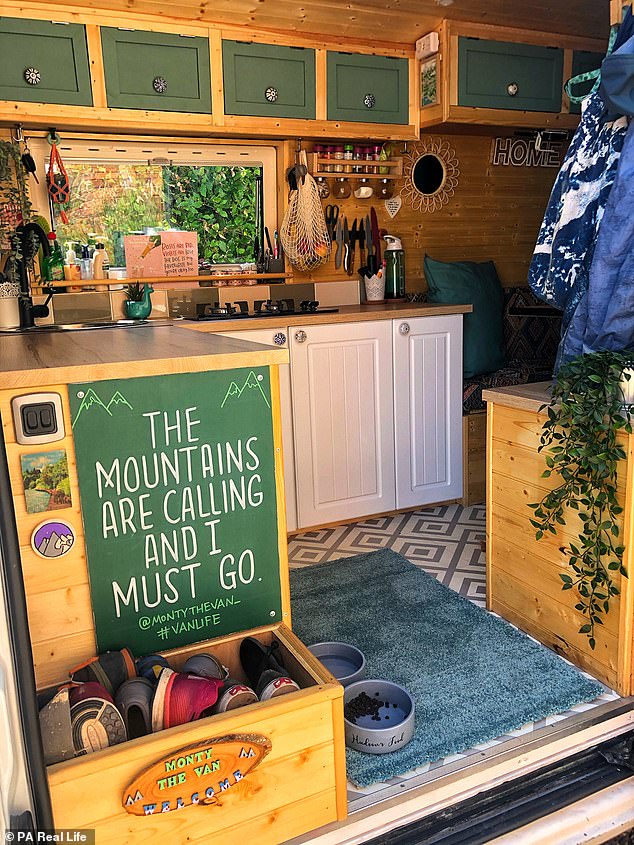 Harriet and Josh brought a van from Gumtree in 2018 and customised it to fit their needs. Pictured: Their second van once it had been renovated

‘No disrespect to anybody that wants to work and doesn’t prioritise travel, but we wanted to get out there and see the world. We thought there must be more to life than the daily grind.’

Harriet and Josh took the plunge in 2018, purchasing a van to travel the world in.

Josh already had a vehicle, but it was too small to adapt into a home, so they traded it in for a better model that they had spotted on Gumtree and customised it to fit their needs.

‘It was like a little red Postman Pat van,’ he explained.

‘The guy advertising the van we got needed one like mine, so it worked out really well. We pretty much just swapped vehicles.’

To save up for their trip, they continued to work at PGL while slowly renovating their Volkswagen Transporter van over a six month period, until they had turned it into a fully-fledged home on wheels. 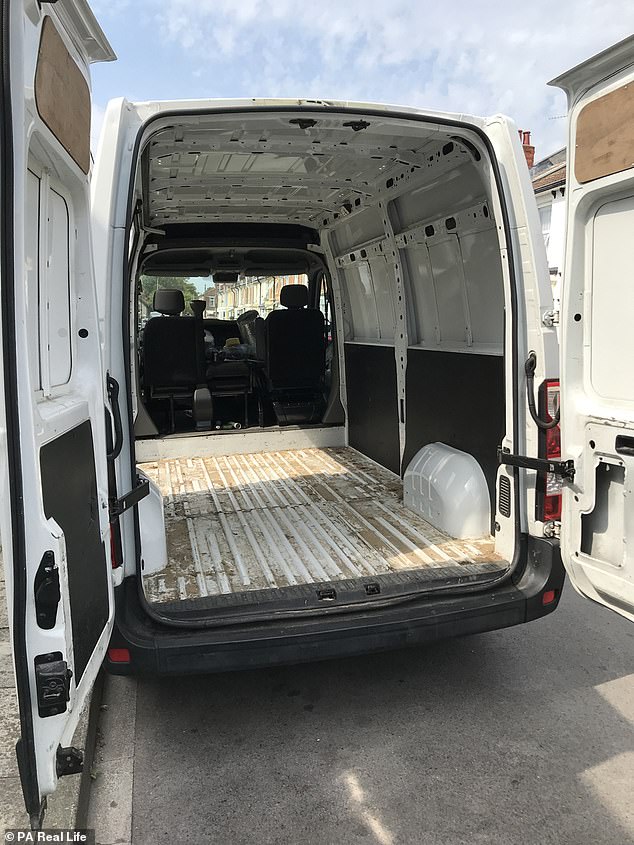 Harriet admits they had no idea what they were doing when they started and would spend little amounts of money on renovations as they went along. Pictured: Their second van before renovations 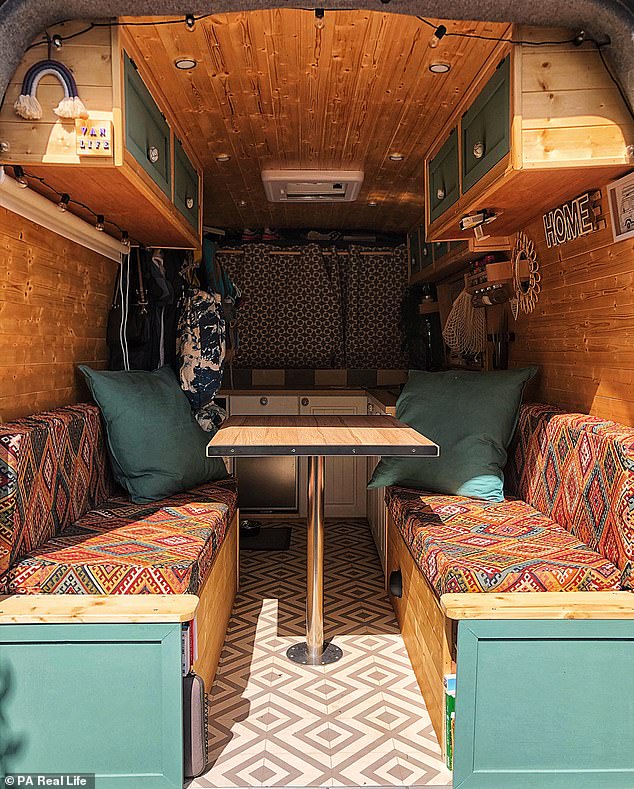 The couple learned how to install items including a kitchenette, fridge and cupboards using YouTube and Instagram. Pictured: Harriet and Josh’s second van after renovations

Harriet said: ‘We had no idea what we were doing to start with. I’m not sure what we spent on the renovation, because it was little bits of money here and there.

‘We watched a lot of YouTube and Instagram videos to teach us how to install everything. We also found a whole community of other van dwellers online who we never knew existed. Everyone was so helpful.’

Doing everything themselves, the pair fitted the vehicle with a double bed, a kitchenette and fridge and several cupboards for storage.

Then, in May 2019, they quit their jobs and set off on their epic journey.

Harriet recalled: ‘We’d travelled before, but never anything like this. We were used to staying in hotels and hostels, but suddenly, everything we had fitted into one van.

‘It was quite a scary feeling – scary, but exciting. Getting used to the practicalities and logistics of the space and where to put everything took a while, too.’ 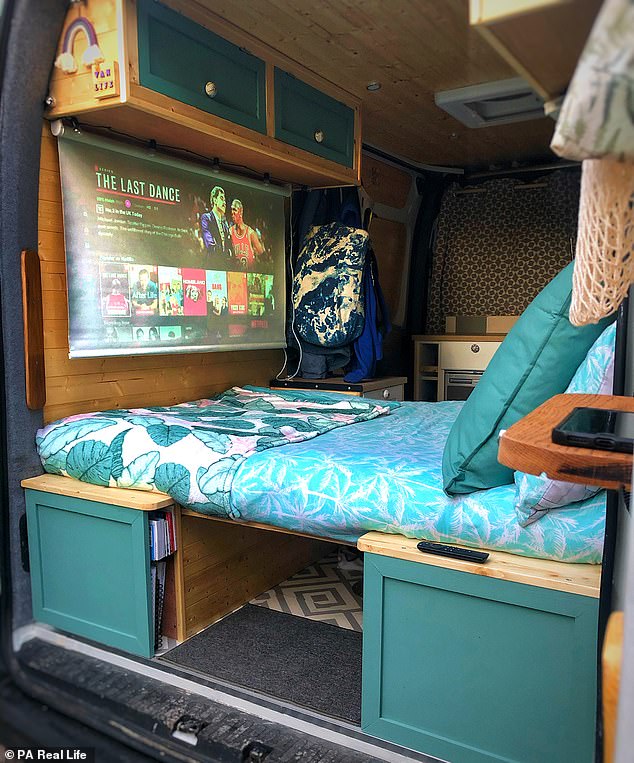 Josh admits there travels were daunting at first because they didn’t have a plan. Pictured: The couple’s second van after renovations 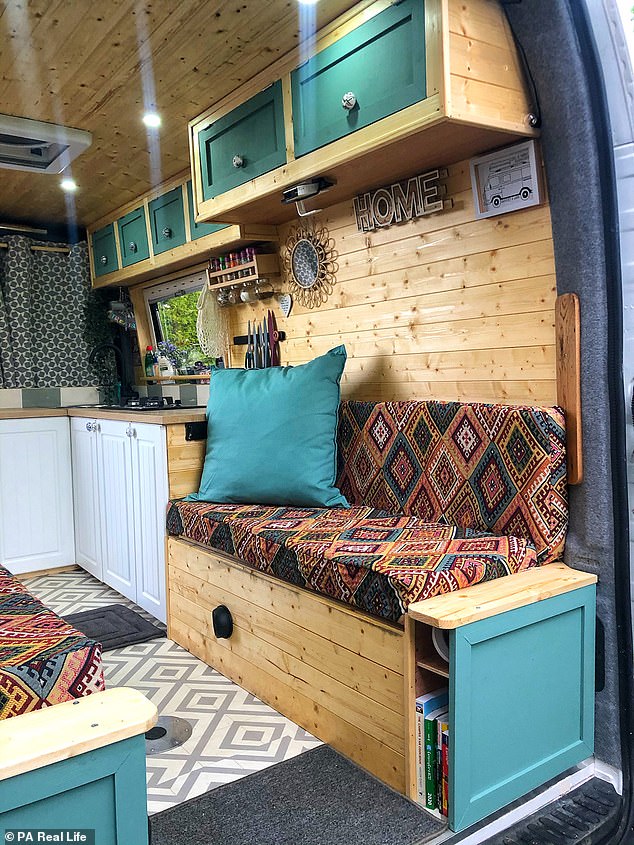 The couple have now travelled to countries including Hungary, Croatia and Luxembourg. Pictured: Harriet and Josh’s second van after renovations 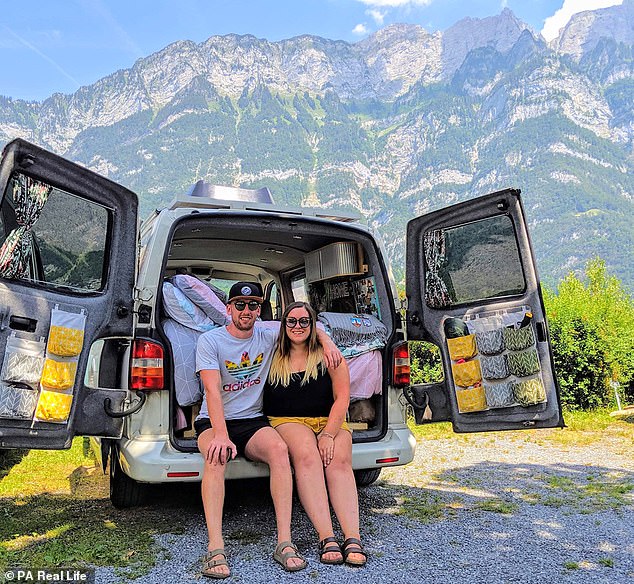 Josh revealed that they would drive along and stop if they liked the look of somewhere. Pictured: The pair in Switzerland

But Josh admits that his excitement was tempered by some trepidation.

He said: ‘It was so exciting leading up to setting off, but when we actually went, it was strangely daunting at first.

‘We’d gone from lives of routine – waking up at the same time every day, going to work, then coming home to the same evenings – to having no real plan. We would just drive along and stop if we liked the look of somewhere.’

Harriet said: ‘Slovenia was one of our highlights. We didn’t know much about it, but it’s a beautiful country. 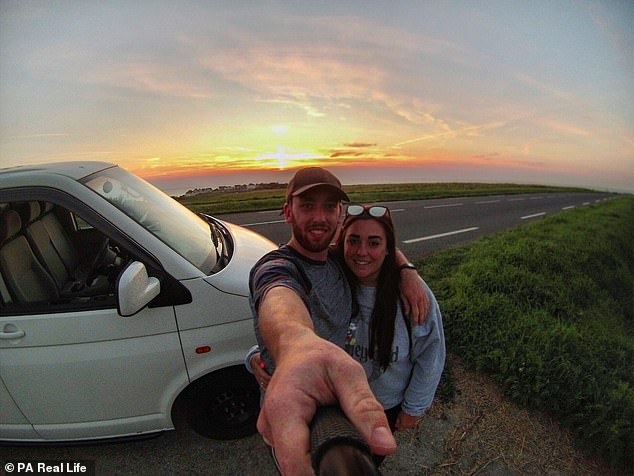 Josh explained that living in a van offers utter freedom and isn’t just about trying to survive each day. Pictured: Harriet and Josh in France

‘We were there for my birthday and went kayaking on Lake Bled. It was such an unexpected gem.’

Croatia also stood out as a jewel of their travels to Josh.

He added: ‘We loved Croatia. We’d been through a lot of inland Europe and wanted to see some beaches, so were thrilled to make our way down there.

‘We got a boat and went out onto the crystal clear seas, had some beers in the sun and went swimming.

‘People think of living in your van as just trying to survive each day, but it’s not like that at all – it’s utter freedom.’

Originally, the couple had planned to be on the road for six months, but disaster struck after just three, when they broke down at the side of a motorway in blazing 32 degree heat. 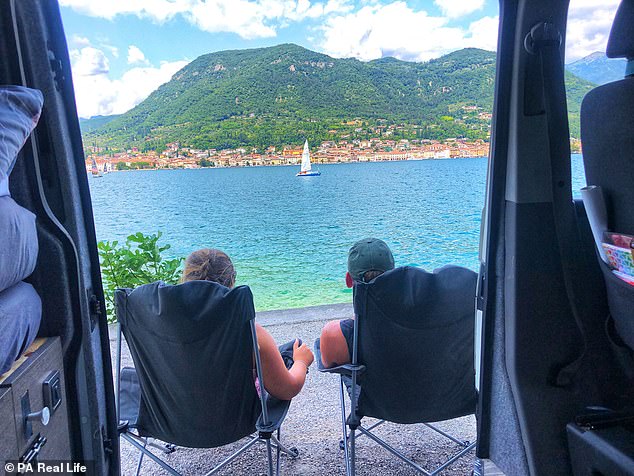 The couple had to come home early after their first van brown down at the side of a motorway. Pictured: Harriet and Josh at Lake Garda, Italy

The van needed a new engine, putting paid to the rest of their plans.

But, luckily, their insurance covered their flights back to the UK and the cost of having their van repatriated once it had been fixed.

So, back in Blighty, they carried out some more repairs on the vehicle, before deciding to sell it.

‘We already knew that we wanted to trade it in for something a little bigger, so we had more room to make things more luxurious,’ said Josh.

‘We loved that first van, but it was just too small. It was gutting to break down and have to come home early, but this was our way of turning a bad situation into a good one.

‘We had some money left in our travel pot, as we’d saved for six months but only been away for three, so we used that to both fix up the old van and buy a new one.’ 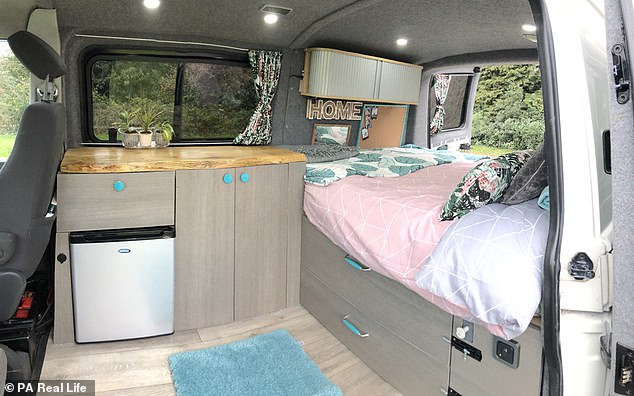 The couple took odd jobs to raise the money they needed to renovate their newest van. Pictured: Harriet and Josh’s first van after renovations

In September 2019 – a month after returning home – Harriet and Josh spent £2,500 on a Vauxhall Movano, which they named Monty and transformed in just four weeks, fitting a wooden seating area that flattened to become a double bed, a kitchenette complete with a stove and fridge and a sink, shower and toilet.

Unlike the earlier van, Monty also has air con and a heater, built-in WiFi and even a projector screen.

They also took on odd jobs to save funds – Harriet in an office and Josh in a leisure centre.

Harriet said: ‘The renovation cost us about £4,500 in total. We kept a spreadsheet of all our costs, as it’s easy to get carried away.

‘But that was for absolutely everything we needed to make the van our home from home. It has a lot more creature comforts than our first van, and is decorated and designed exactly how we want it.’ 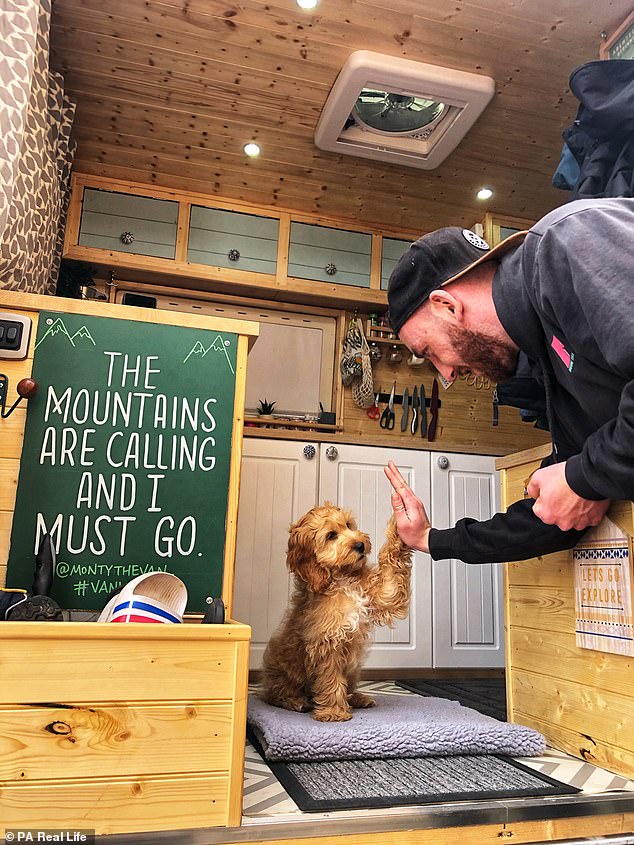 Harriet estimates that they spent £4,500 renovating their van, keeping track of spending using a spreadsheet. Pictured: Josh and their dog Hudson 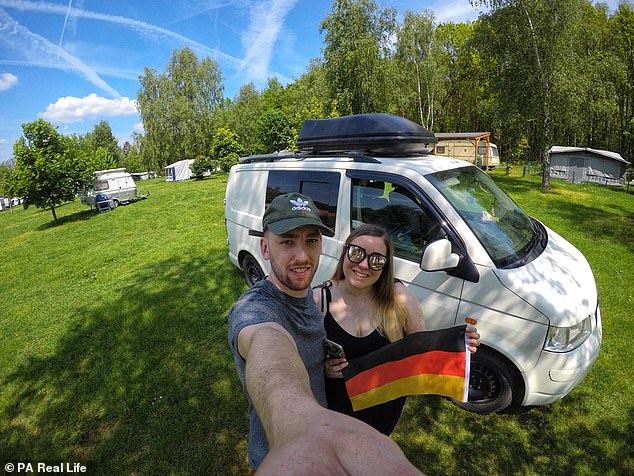 The couple, who are waiting for borders to reopen amid Covid-19, have been customising their van throughout lockdown in Shropshire. Pictured: Harriet and Josh in Germany

In March, the pair bought cockapoo puppy, Hudson, to join them on the road and planned to set off in April – only to be held back by Covid-19.

Now, as they wait for various borders to reopen and for travel to be deemed safe, they are staying in Telford, Shropshire, where Josh is working in a warehouse and Harriet is tweaking the van to maximise their storage space.

And Josh cannot wait to be given the green light to go, adding: ‘The main challenges of van life are simply the practicalities – where do you camp, where do you find fuel, where can you refill your water tank and stock up on food?

‘But the memories we have made are unforgettable and we’ve met people along the way that will be friends for life. 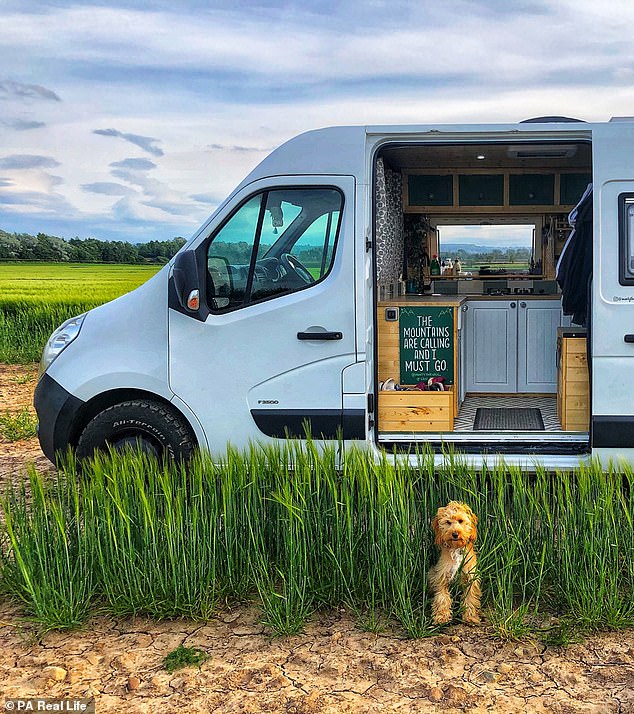 Josh revealed they’ve made friends for life during their travels and their van is better equipped than some of the places he has lived. Pictured: Hudson posing outside their van

‘People are often interested in the van and ask questions about how comfortable it is, but it is genuinely better equipped than some places I’ve lived in.

‘It’s got it all – WiFi, a bed, a shower and toilet and even a projector. We can literally lounge on the sofa and watch Netflix on the beach.’

Harriet admits that she does not miss the creature comforts of conventional living for one second.

She said: ‘Renovating the van and hitting the road was a leap of faith, but it’s the best thing Josh and I have ever done.’ 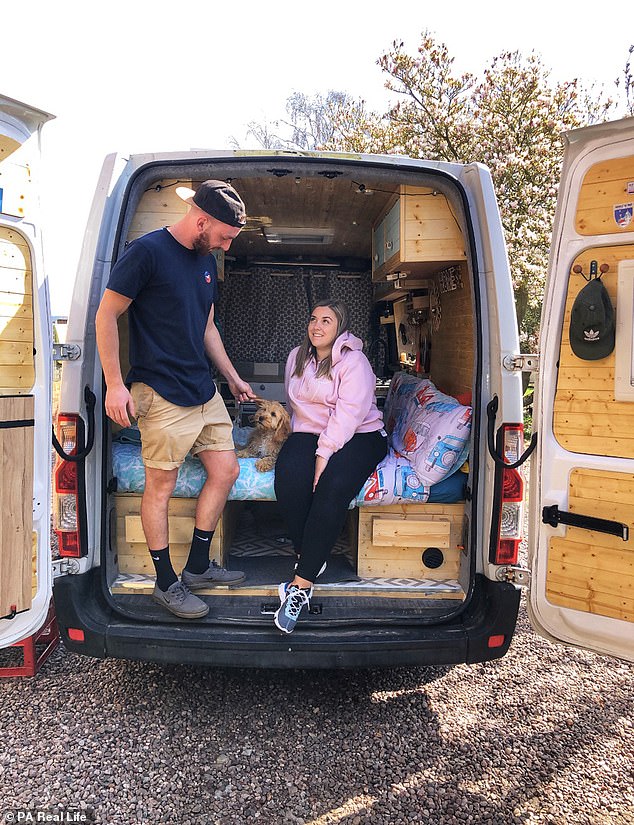 Harriet claims renovating their van and travelling has been the best thing they’ve ever done. Pictured: Harriet and Josh with Hudson