NSW is smoothing the path for a prominent piece of the federal government's gas-led recovery by granting critical infrastructure status to plans for a Commonwealth-funded gas-fired power station in the Hunter Valley. 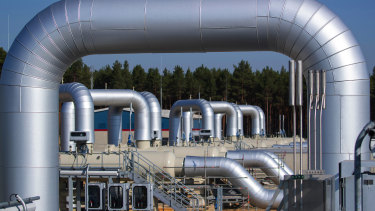 NSW government has granted critical status to a federal government project to build a new gas-fired power plant in the Hunter Valley. Credit:Bloomberg

"Gas-fired power stations will have a critical role to play in ensuring our energy security as we transition to a low-carbon emissions economy with renewable energy projects such as wind and solar," Mr Stokes said.

"As well, this project could create jobs for up to 600 construction workers and generate around $800 million worth of investment for the local economy."

NSW announced in November a strategy to become a "renewable energy superpower" and stimulate construction of a whopping 12 gigawatts in new wind, solar and pumped-hydro projects.

Mr Taylor said he did not trust private industry to replace the baseload power which will be lost due the scheduled closure in 2023 of the 1000 megawatt Liddell coal-fired power plant.

If private power generators did not commit before April next year to build a total of 1000 megawatts "government will fill the remaining capacity", but only to fill a shortfall, Mr Taylor said in September. "If industry steps up, we'll step back."

The critical declaration from Mr Stokes lists a gas plant with capacity up to 750 megawatts, which indicates industry is expected to deliver at least 250 megawatts of generation by the deadline.

Energy analysts told this masthead in October that the independent Australian Energy Market Operator had not forecast any shortfall in dispatchable power supply due to the closure of Liddell.

The operator's forecast noted a potential shortfall of just 157 megawatts by 2022, but noted the NSW government had confirmed investment in 170 megawatts of dispatchable batteries.

However, Mr Taylor said 1000 megawatts of extra capacity was required to stop power price rises and that "government has always been clear – we need to see life extension or like-for-like replacement of Liddell".

The power station would be located on the former site of a demolished aluminium smelter at Kurri Kurri in the Hunter Valley.

The NSW state government also this week approved a $500 million underground coal mine proposal in the Hunter Valley.

Malabar Resources' Maxwell mine, located at Jerrys Plains, will produce around 8 million tonnes per annum of metallurgical coal which is used for steel making. The mine is expected to operate for 26 years.

The Independent Planning Commission said in a statement the potential impacts from the Maxwell mine are manageable, and the risks of adverse impacts on the environment are low.

Lock the Gate co-ordinator Georgina Woods said approval of the Maxwell mine "further entrenches an industry with a highly uncertain future" and Hunter Valley communities would "bear the brunt of this government stupidity".