SIMON WALTERS: Oh, the irony that Captain Mainwaring Mogg may have saved Theresa May

Westminster has witnessed many political pantomimes over the years, but few as comical as Jacob Rees-Mogg and his cast of ‘Dad’s Army’ Brexiteer plotters on Tuesday.

Five days after announcing he was writing a letter demanding Theresa May’s resignation, expecting his Tory MP comrades to answer his call to arms, Rees-Mogg looked behind and found most had deserted him.

He put a brave face on it all at a press conference with a handful of faceless lieutenants, but was reduced to a laughing stock when he compared himself to clottish Captain Mainwaring from the 1970s TV comedy.

Inside Number 10, Mrs May’s aides joined the guffaws as they watched the Rees-Mogg farce unfold.

But those close to the Prime Minister believe it had a greater significance: they are convinced that by over-playing his hand and failing, so far at least, to get the necessary 48 Tory MP signatures to trigger a vote of no confidence in her, Rees-Mogg may turn out to be not her conqueror, but her saviour. 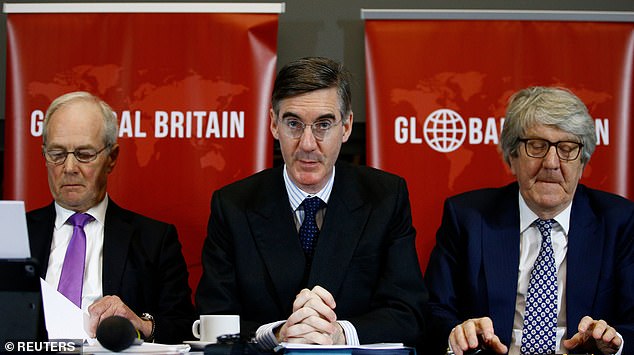 Their hopes were boosted by a poll yesterday which suggested there has been a surge of support for her. A week ago, only one in three voters wanted her to stay in Downing Street – now the number has leapt to one in two.

Mrs May’s supporters believe the more voters see her doing her best in near-impossible circumstances – plugging away to win a concession here and a concession there from Brussels, holding five-hour Cabinet meetings and waiting to see if any of those present plunge the knife in her back the moment they walk out of Number 10 – the more they admire and sympathise with her.

By contrast, the more they see of the hardline Brexiteers’ treacherous antics and Rees-Mogg’s contrived courtesy, the more sceptical they have become of the Eurosceptics.

He called the press conference in a spirit of defiance. Instead, in the double-breasted suit he has worn since he was out of short trousers, and with a bunch of pale, male and stale colleagues on either side, it all looked disorganised, disloyal and, in the eyes of many, downright odd.

It took seasoned political observers back to 1995 when another ragtag army of anti-Brussels would-be Tory guerillas gathered to bring down a Prime Minister – and ended up as chumps.

John Redwood resigned from John Major’s Cabinet and, at a press conference in Westminster’s historic Jubilee Room, announced he intended to oust Major. 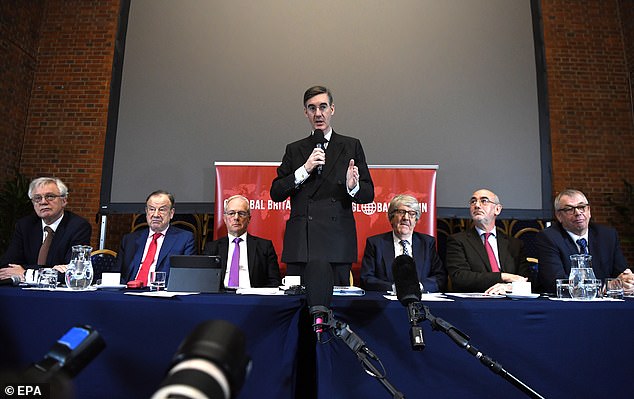 The spark was the EU’s 1992 Maastricht Treaty, which Redwood claimed was a betrayal of British sovereignty. Ring any bells?

Like Rees-Mogg, Redwood surrounded himself with a close-knit group of diehard Eurosceptics. The aim was the same: to show he – and they – were serious contenders for high office. They were greeted with mockery and worse. The usually intense Redwood wore a manic grin and was reduced to cracking jokes about his ‘Vulcan’ nickname from Star Trek.

The rest were every bit as lacklustre and stale as Rees-Mogg’s superannuated band of Brexit brothers. One of Major’s aides called them ‘Ward 8 from Broadmoor’.

No one in Number 10 has been as rude about Rees-Mogg and his team. They don’t need to be: the Brexit camp is doing it for them in a bitter schism over who is to blame for the failed coup attempt.

Six months ago, no one outside Westminster had even heard of Rees-Mogg’s European Research Group of Tory MPs.

With its innocent name, the ERG sounded like a group of MPs whose only aim was to carry out academic research into Europe. 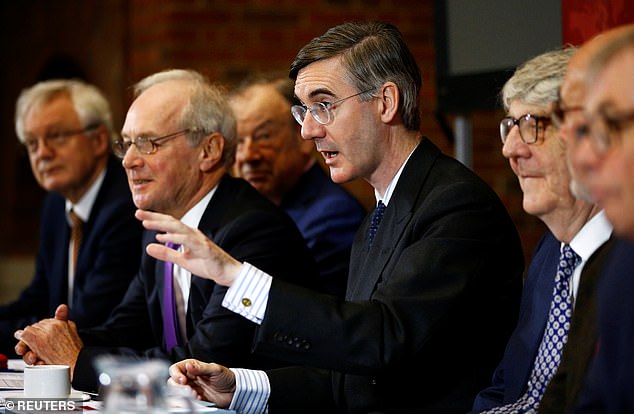 Five days after announcing he was writing a letter demanding Theresa May’s resignation, expecting his Tory comrades to join him, Rees-Mogg found most had deserted him

But all that has changed now the ERG has revealed its true colours – it is a Conservative ‘cell’ intent on destroying Mrs May.

Like Momentum, the hard-Left fanatics determined to make Labour ideologically ‘pure’ by banishing all moderates, the ERG’s ‘purists’ are determined to crush all opposition to Brexit.

In pursuit of crushing Mrs May too they have shown a vicious streak. Few doubt the unnamed MPs who made threats against Mrs May such as telling her to ‘bring a noose’ to a meeting of MPs and warning she was ‘entering the killing zone’ were ERG members.

No ERG members have tried harder to bring her down than its zealous self-styled ‘shop steward’, High Wycombe MP Steve Baker.

Having rashly announced that he had the required 48 signatures only to find he had nothing of the sort, Baker led a desperate bid to persuade more to sign up.

A born-again Christian, he was baptised by full body immersion in the sea; he said he joined the RAF in the 1990s to ‘fight totalitarian communism’ – as a technician, not a pilot.

When Baker arrived at Westminster in 2010, he was seen as ‘nice but naïve’. These days, he is seen as just naïve.

The ERG knives once poised over Mrs May’s jugular are now directed at each other – with anger targeted at older members who have savaged her Brexit deal but refused to put in no-confidence letters. 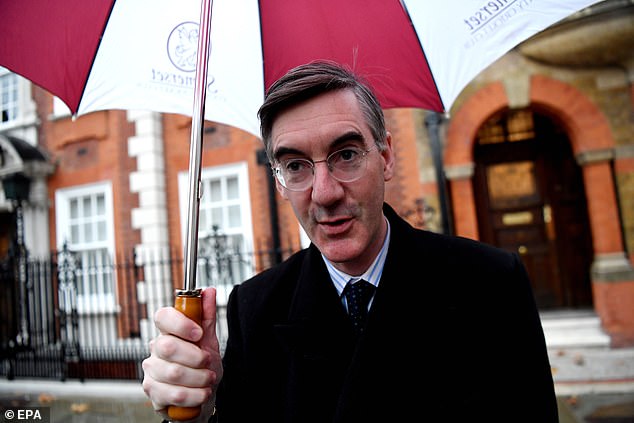 Founder member and senior Conservative Sir Bernard Jenkin was targeted over claims he led an ERG revolt to stop Rees-Mogg and Baker toppling Mrs May.

A source said of him: ‘It seems God bestowed him with extra ego to replace the lack of balls and brains’, while another added: ‘The trouble with Bernard is he sits on the pot but he never pi**es.’

And, writing on the ERG WhatsApp group, backbencher Nadine Dorries accused MPs including Owen Paterson and former leader Iain Duncan Smith of ‘badly letting the ERG down’ while they ‘hid under the covers’,

The 1995 attempted coup by John Redwood was seen off by John Major, who survived in Downing Street for two more years. Right now, Mrs May would probably settle for the same.

But the story may not have a happy ending for the party.

Major’s Tories were swept out of power in a Labour landslide fuelled by voters sick of internal squabbling. Jeremy Corbyn will be hoping the same disgust with Conservative Brexit feuding will hand him the keys to Number 10.