If you watched the Oscars and wondered how it came to pass that actor Will Smith assaulted comedian Chris Rock on live television, and then went on to win an Oscar, receive a standing ovation and party all night long, you were not alone.

Even by Hollywood’s PR-driven, ego-stroking standards, where there are many rules for all, and very few for A-list celebrities, it was surprising to see the Oscars’ organising body, the Academy of Motion Picture Arts and Sciences (AMPAS), do so little. 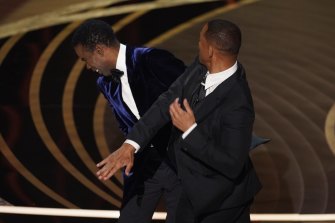 No doubt prompted by the avalanche of headlines from around the world this morning, almost all of them asking why no action was taken over an assault seen around the world, AMPAS has been spurred into action.

Last night’s threadbare and non-specific “the Academy does not condone violence of any form” was today upgraded to a more overt statement: “The Academy condemns the actions of Mr Smith at last night’s show.”

Those actions were walking onto the Oscar stage after comedian Rock made a joke at the expense of Smith’s wife Jada Pinkett Smith, striking him across the face and then, as the auditorium reacted with shock and confusion, shouting twice: “Get my wife’s name out of your f—king mouth.”

“We have officially started a formal review around the incident and will explore further action and consequences in accordance with our bylaws, standards of conduct and California law,” the statement from AMPAS said.

According to reports in US trade publications, the Academy’s board of governors, including president David Rubin and CEO Dawn Hudson, held an emergency meeting this morning to address the issue and growing fallout from it.

Online, it seems to have divided opinions between those who felt Smith’s actions were justified because he was reacting to a joke – and admittedly, a poor one – directed at his wife. Others asked why what appeared to be an obvious assault was ignored by the event’s organisers.

The Los Angeles Police Department have confirmed they are aware of the incident, but last night told media that Rock had declined to press charges, and in such an instance, the matter was essentially – in police terms – laid to rest.

But the LAPD statement did include this caveat: “If the involved party desires a police report at a later date, LAPD will be available to complete an investigative report.“

It is understood that the event’s organisers did discuss the possibility of removing Smith from the Oscars while the event was still underway, but they had not resolved any single course of action by the time Smith had won, made his speech and departed for the Vanity Fair after party.

In that speech, Smith apologised to the Academy and to his fellow nominees but not to Rock. “Love will make you do crazy things,” Smith said.

During the telecast, Smith was taken aside by actor Denzel Washington, Australian nominee Nicole Kidman and her husband Keith Urban. He was also seen speaking to his publicist, Meredith O’Sullivan, in the auditorium, as well as the show’s producer Will Packer.

The Hollywood Reporter said a “sanction” of some kind against Smith was a likely outcome, though the organisation has no substantive power, except to suspend his membership.

The Academy’s code of conduct does say the organisation is “categorically opposed to any form of abuse, harassment or discrimination”, including members acting “in a manner that violates standards of decency”.

The Academy’s board has the power to suspend or expel those in violation of the code.

The New York Post has quoted sources saying Smith’s Oscar – his first – may be rescinded by the Academy, but on the organisation’s historical form that would seem an extremely unlikely outcome.

Far more scandalous figures in Hollywood history – producer Harvey Weinstein and director Roman Polanski, for example – did not have their Oscar wins rescinded when scandal came to their door. Both were, however, expelled from the organisation.