OUCH! Gymnasts – including US Olympians – share their worst fails

OUCH! Gymnasts from around the world – including US Olympians – share their worst trips, tumbles and cringe-worthy crashes with viral hashtag challenge

What goes up must come down – and doesn’t always stick the landing.

Behind every incredible gymnastics routine you see at the top level competition is a series of falls and flubs that came in practice to make it happen. And now, some of those literal slip-ups are being posted online for the world to see.

Hundreds of gymnasts – including some of the top-level athletes in the world – are taking to social media to engage in the new #GymnasticsFailChallenge, which sees them post videos of some of their biggest wipe-outs. 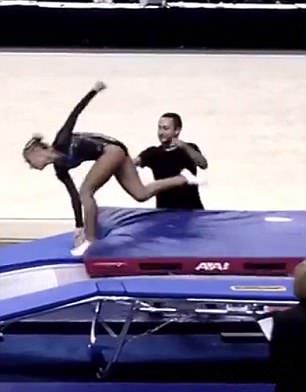 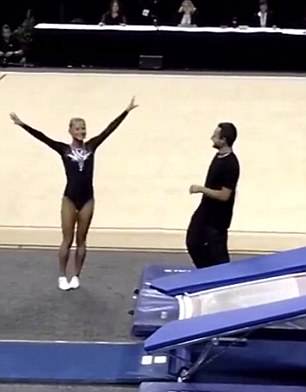 Making the save: A number of top-level gymnasts, such as USA trampolinist Breanne Millard, are sharing their worst trip-ups as a part of the #GymnasticsFailChallenge

The result of the challenge is a deluge of footage online that shows the cringe-worthy moments a gymnast over-shot, over turned, or straight-up tripped over themselves while trying to execute a perfect trick.

The challenge was first started by Sydney Saturnino, a first-year senior from Italy, who shared a pair of clips showing her falling off the beam and uneven bars along with the hashtag #GymnasticsFailChallenge.

The young gymnast went on to nominate a number of her friends in the sport, and soon enough the challenge was going viral.

Some clips come from embarrassing slips in competition, while many others feature epic tumbles in practice where the athletes are saved from injury by plunging into a foam pit.  Some are simply hilarious, while others would leave you wondering if the gymnast survived the event if it hadn’t been posted by the athletes themselves. 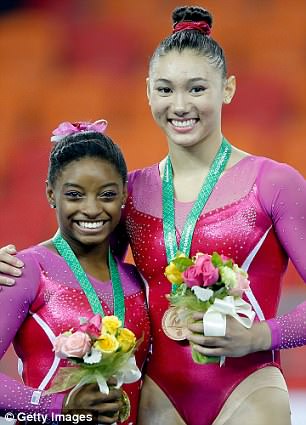 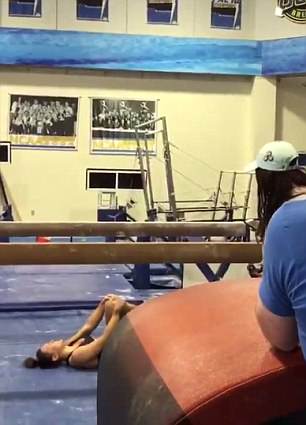 Star power: Hitting the ground: The challenge has even attracted the attention of US Olympians such as Kyla Ross (pictured left with Simone Biles and right after a fall)

So far, more than 1,000 other gymnasts have participated in the challenge – including a number of Olympians and World Champions.

Among those joining in are some of the USA’s best-known gymnasts, including Laurie Hernandez, who was a member of the gold-medal winning team at the Olympics at Rio in 2016.

‘Ahhh yes. I was nominated for the fail challenge but please know… there are MANY more,’ Laurie wrote on Twitter as she shared no less than three clips of her falling off of various apparatus – including a faceplant on the balance beam.

Kyla Ross, who took the same team gold at the London 2012 Games, proudly posted a video of her falling on balance beam as well, with an onlooker joking in the clip: ‘It looked bad, but she’s laughing!’ 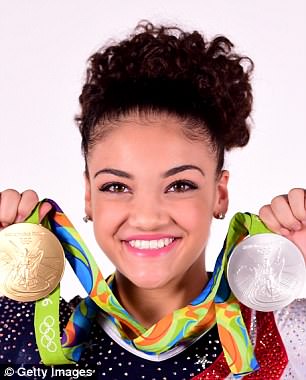 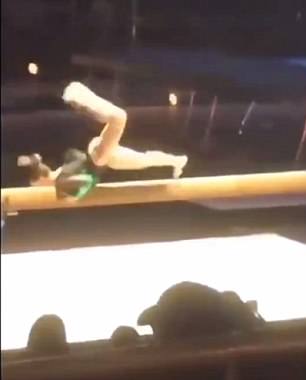 Face-first: Laurie Hernandez shared a number of her own gymnastics fails, including a face plant on the balance beam 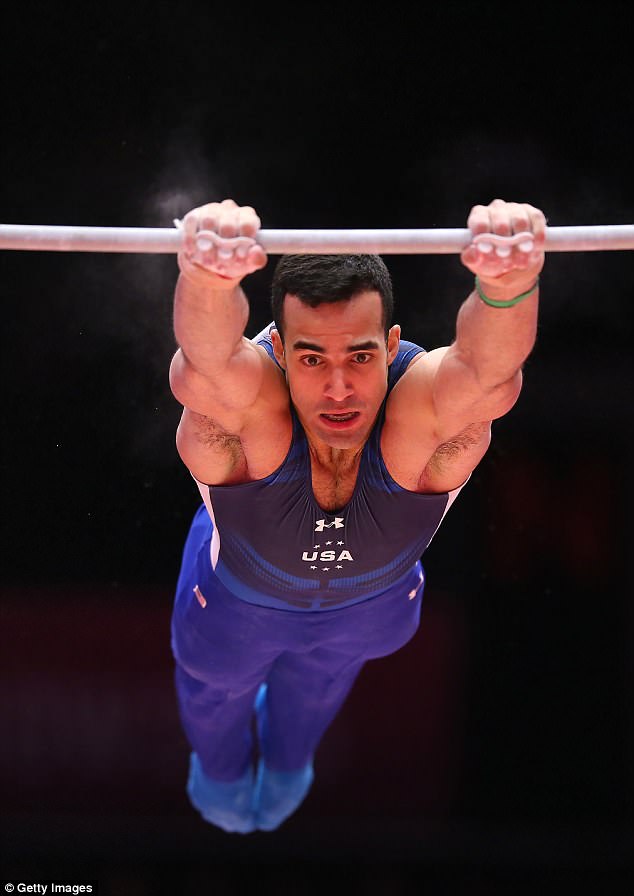 Bringing it for the boys: 2016 Olympic silver medallist Danell Leyva wrote that his clip for the challenge shows ‘the highlights of my gymnastics career’ 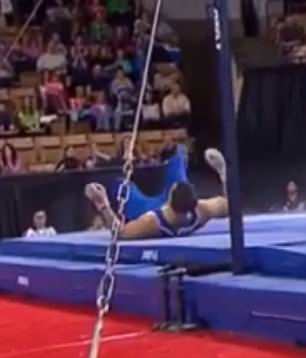 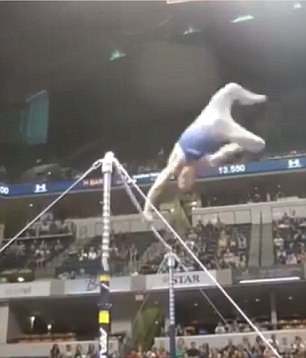 Hit after hit: Danell can be seen tumbling off of the high bar multiple times in different ways

Danell Leyva, who picked up two Olympic silvers in 2016, also joined in, writing: ‘This will definitely be my favorite #tbt because it has all the highlights of my gymnastics career. Enjoy!’

His offering sees him crashing hard off the high bar on five separate occasions – all during competition.

World-class trampolinist Breanne Millard chimed in with a clip of her running into a tumble too slowly, causing her to bounce backwards off the trampoline – yet still managing to show off a great finish.

British gymnasts Danusia Francis and Laura Mitchell also joined in, with the latter showing off an impressive fall that saw her somehow crash into both of the uneven bars.

‘I think my gymnastics fail takes the win!’ she declared. 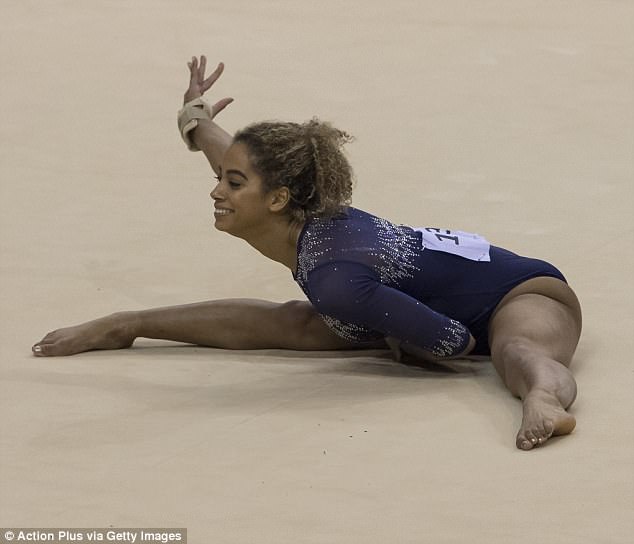 Down: British gymnast Danusia Francis also joined in with an embarrassing practice mishap 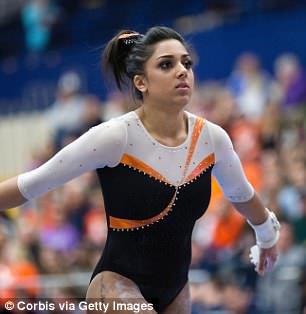 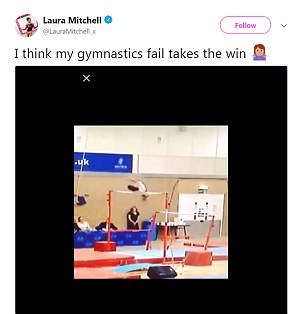 Hitting up: British gymnast Laura Mitchell reckoned that she had the competition beat with her fall that involved crashing into both of the uneven bars