The party may have been cancelled in 2020, but the phone did not stop ringing.

Indeed, the stories about the names and faces that keep PS ticking along came in thicker and faster than ever. Perhaps it was the result of months of isolation and social distancing? Or a reaction to the increasing artifice of social media, and a desire to know what was really going on?

Feedback received from many readers made it clear these pages provided a connection to a world that had been so rudely interrupted by a microscopic virus and the worst mother nature could throw at us.

After spending 2019 as on-air rivals, ratings battles and breakfast television drama were the last thing on the minds of Deborah Knight, Virginia Trioli and Samantha Armytage when they found themselves caught up in the devastating fires that were wreaking havoc on the South Coast last summer.

While former ABC Breakfast co-host Trioli was bunkered down in Bermagui, the Sunrise and former Today co-hosts were not far away enjoying family holidays.

Armytage and her then-boyfriend Richard Lavender, with whom she is due to soon tie the knot, both own properties in the Southern Highlands. Along with her beloved "fur baby" Banjo, Armytage was evacuated to a caravan in the middle of a field in Narooma, while Knight and her family were in Tathra.

"I'm feeling very thankful for my lot in life & very sad for those who've just lost lives, livestock & livelihoods," Armytage wrote on Instagram. "I plan to use the year ahead wisely. To simplify my life. With more love for my loved ones, more kindness, more patience, more healthy living."

As 2020 draws to a close, Armytage's comments carry some potency all these months later, especially given the shifting sands around Sunrise.

Comic Celeste Barber emerged from the fires initially triumphant, but was eventually singed after her mammoth bushfire fundraising, which was attracting $10,000 a minute at one point, delivered a punchline that left few laughing.

With Nicole Kidman, Chris Hemsworth, the Minogues, Pink, Elton John, Russell Crowe and Ellen Degeneres all signed up, Barber's worthy cause turned into a legal nightmare when the $51 million raised became the focus of a the year's silliest court battle over where it could be spent.

After being shutdown by the pandemic, production on two mega-budget Sydney film projects eventually got underway.

The latest instalment in the Thor movies, featuring Chris Hemsworth and Natalie Portman, is in full swing after months of delays, while a martial arts superhero named Shang-Chi will soon be immortalised on the big screen, with former Bond girl Michelle Yeoh (a recent fan of Woolloomoolloo's Otto) and Hollywood funny lady Nora Lum, known professionally as Awkwafina, all slipping into Sydney for the shoot.

Kidman – who was allowed to quarantine at her country estate with hubby Keith Urban and their daughters – brought Melissa McCarthy with her from Hollywood to shoot Nine Perfect Strangers in Byron Bay, pumping $100 million into the economy along the way.

Baz Luhrmann's Elvis Presley project managed to resume filming after being shutdown for several months when one of its biggest stars, Tom Hanks, became the first A-list celebrity diagnosed with COVID-19.

His wife Rita Wilson set off alarm bells across the local television industry as she had done the talk-show circuit while unknowingly riddled with the virus, putting veteran showbiz reporter Richard Wilkins, among others, into isolation for two weeks. 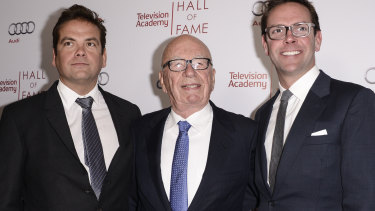 While his friends say he is still very much "hands on" when it comes to the family's news business, PS can only assume Rupe is a fan of the HBO series Succession, about a mythical big money media family and its squabbling siblings trying to win favour from their ailing, ageing father to take control of the family company.

At the Golden Globes this year winning actor Brian Cox, who plays family patriarch Logan Roy, claimed Murdoch had "f–k all" to do with his character. Not that the Murdochs saw it that way.

Backstage Cox revealed a man had approached him to tell him how much he and his wife were enjoying the second season of the show, although she "finds it a little difficult at times".

When Cox asked why, he explained: "My wife is Elisabeth Murdoch."

There have been more than 350 stories that filled PS's pages this year, making it impossible to reflect on them all here today. However it would be remiss to see the year out without mentioning a few notables.

Appearing in Waverley Local Court in February, reality TV star and fitness guru Michelle Bridges was given a three-month driving ban and a $750 fine with a conviction recorded after pleading guilty to mid-range drink driving while her child was in the car on Australia Day.

Rebel Wilson dropped 27 kilograms this year and picked up a hunky new boyfriend along the way in the form of Budweiser beer heir Jacob Busch. However Wilson's penchant for designer active wear, flying in private jets, partying with minor European royals and smugly lounging on super yachts with her rich, good-looking boyfriend during the pandemic has thrown into question her enduring appeal among those fans who relished in her unabashed boganism. 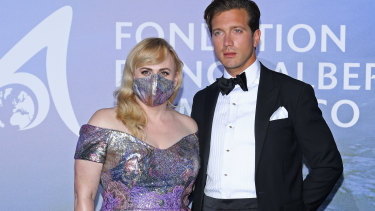 Rebel Wilson and Jacob Busch in Monaco in September. Credit:Getty

Michael Yabsley, 64, the former dashing and debonair NSW Liberal politician who for decades was happily married to wife wife Susie, with whom he has two children, opened up to PS this year about leaving the family home and moving in with his boyfriend in Darlinghurst.

"I guess like a lot of people in my age group, I lived with a lot of denial for a very long time," Yabsley explained.

Meanwhile, at the age of 35, Hugh Sheridan, the TV soap heartthrob and cabaret singer, mustered all the courage he had to come out as “human” in an essay he penned for a weekend magazine, saying he could not find a label, such as "gay" or "bi", which fit. This came as news to several former boyfriends, while his casting in musical Hedwig and the Angry Inch caused an outrage among the LGBTQI community leading to him being de-cast.

Social media influencer Nadia Fairfax announced she was getting getting married, but her incessant popular girl routine on Instagram featuring the "beautiful people" in constant states of wide-eyed wonder and designer-label amusement, while the rest of the country lost jobs, homes and health, was a little off-key for many followers. 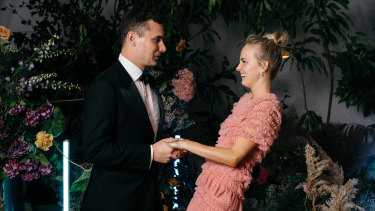 Lara Bingle leapt to her mother Sharon's defence after she dared complain about the supposedly appalling conditions of her four-star hotel during quarantine. Sadly the #prayforsharon social media campaign failed to gain much traction.

Millionaire publican Bruce Solomon opted to sell one of the city's last remaining and most-loved inner city watering holes – Darlinghurst's Green Park Hotel – which for 127 years had served a broad cross section of people. It was sold to St Vincent's Hospital with plans to convert it into a mental health clinic, ironic given all the emotional distress the sale has caused so many once loyal regulars. 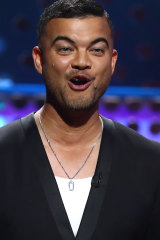 Heiress Ros Oatley and her beloved Great Dane Abbie became the talk of Mosman after victims came forward when PS shared stories of people being bitten – including charity fundraiser Juliet Potter while a guest at Oatley's impressive palazzo – by the huge hound. Currently it's lawyers at 10 paces among various alleged victims and Oatley, who's silence on the subject has been deafening – though PS understands Abbie was euthanised earlier this month.

Guy Sebastian and his former bestie and manager Titus Day’s courtroom showdown rocked the showbiz world. Earlier this month Day had his fraud charges withdrawn and replaced with allegations he embezzled millions in royalties and performance fees from the inaugural Australian Idol winner. Day, who was arrested and led away from his family home in handcuffs, also saw his other major clients, including Sophie Monk and Grant Denyer, jump ship.

It was meant to be the happiest day of their lives, but by the time Sydney red-carpet regulars Scott "Jimmy Niggles" Maggs and his new bride Emma Metcalf came back from their honeymoon in the Maldives, their March wedding had become front-page news after a quarter of their guests tested positive for COVID-19.

"I have to say the media attention … did not help things. It just created more hysteria and panic when really, I think we should be thankful for the people who went and got tested and let us know what was going on. We can't shame people over a disease," the new bride told PS.

On a slightly more amusing front, the great botox ban of 2020 was another – ahem – devastating side affect of COVID, with Sydney socialites looking like Shar-Pei puppies for a while there around April, but those same faces were once again tight as drums once restrictions were eased. 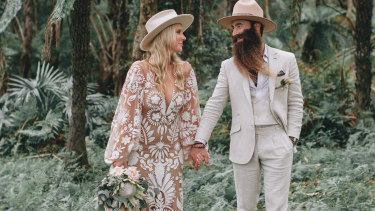 Miranda Kerr joined the ranks of Pete Evans when the former Victoria's Secret model, who married a billionaire, flies on private jets and lives in luxurious gated compounds, shared a post on Instagram to her 12 million followers promoting a "virus protection" guide from "medical medium" Anthony William, which basically claimed celery juice would save the world.

As for Evans, well what a gift he has been throughout 2020.

The reformed party boy initially posted selfies showing him with tubes shoved up his nostrils to ingest ozone, along with a helpful "anti-bad vibe" shield and positive-energy pyramid by his side, at the start of the pandemic. But over the months he became a pariah of the established scientific and medical communities charged with trying to control the health crisis, with many publicly criticising his increasingly polarising views dismissing the worldwide response to the virus.

Clearly he loved the attention, continuing to make ever more absurd statements even as the global death toll climbed.

Billionaire retailer Gerry Harvey now calls it his "60 Minutes bungle", and later admitted to PS he was mortified that after appearing on 60 Minutes at the start of the health crisis, Australians "now think I'm a heartless, greedy old bastard".

"That was never my intention," the 80-year-old said 48 hours after being engulfed in a stinging public backlash following an ill-fated attempt "to offer some hope … provide a positive view" of the COVID-19 crisis.

Harvey, the executive chairman of retailer Harvey Norman, shocked viewers when he ridiculed public fear of COVID-19, only to then claim the coronavirus pandemic had been good for his business, offering massive sales figures for freezers and air purifiers as proof.

Consider it a lesson learned Gerry, though to be fair, it was just one of many which 2020 has taught us all, whether we wanted to learn them or not.