So, what kind of parent are YOU? Pediatrician who became an internet sensation with his magic ‘hold’ to stop a baby from crying shares his best tips to raise a happy tot

A pediatrician who became an Internet sensation with his incredible viral video about how to calm a crying baby is back with more parenting hacks.

In an exclusive extract released to DailyMail.com, the California-based pediatrician with more than 30 years of experience examines the main styles of modern parenting and the best strategy to raise a happy child.

So what kind of parent are you? Take a look below…. 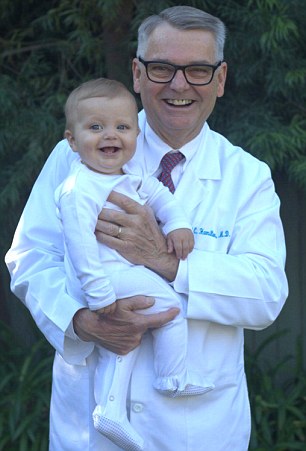 1. Authoritarian parents rank high in demandingness but fall shy when it comes to responsiveness to their children. These parents are sometimes referred to as totalitarian.

3. Permissive or indulgent parents rank low in demandingness and high in responsiveness.

It should come as no surprise that the sweet spot for parenting types is the authoritative style. Studies showed that parents who were demanding but loving and responsive to their children produced offspring who performed better in society. Children raised in authoritative homes have a better understanding of how things work. They follow the rules and succeed at higher levels than children raised in authoritarian, indulgent, or negligent homes. This is the balance parents should strive for.

Another question you must ask yourself is whether you are going to be a hands-on or hands-off parent. My advice is this: be both. Usually, what your children need to do is figure things out for themselves — and this even applies to young babies.

When your daughter is attempting to roll over, for example, let her work through the struggle of doing it. There’s a technique in rolling over, and it is important that your girl, through trial and error, find the right way to do it. It’s tempting to reach out and help her with a gentle nudge, but resist those good intentions! Let her struggle through it. Jumping in and fixing things will only inhibit your daughter’s growth toward independence and self-confidence. 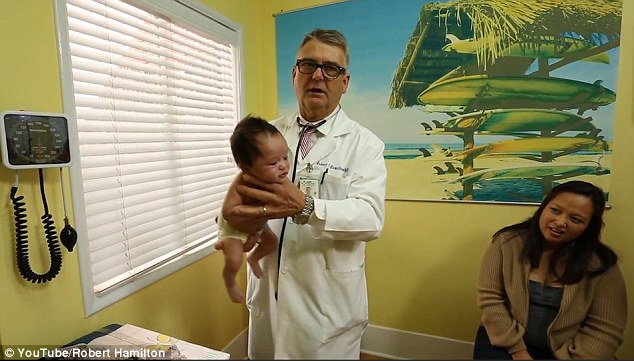 Magic touch: Dr. Hamilton became an Internet sensation in 2015 with his incredible viral video about how to calm a crying baby with a special ‘hold’

The frustration of not being able to do something isn’t always bad. It drives us forward. When babies and young children finally achieve their goal, they sense that they have achieved something significant, so don’t mess with the process.

On the other hand, when your children are learning something new, they do need teaching. Teaching is a hands-on process. We learn by watching something being done and hearing how to do it and then by attempting it ourselves. That is what education is all about.

When I was a young boy, my father taught me how to tie a necktie. I remember looking in the mirror and to trying to make my mirror-inverted fingers follow his instruction. It was a painful and thoroughly frustrating process. He was patient, however, and at times put his hands over mine to help me loop the tie correctly. In time, I learned how to do it, but it took his instruction — including his hands over mine — for me to ultimately figure it out. This is hands-on learning at its best.

During my training in pediatrics — another apprenticeship-like, hands-on experience — we learned and followed the adage: ‘Watch one, do one, teach one.’ This meant that after we had watched a particular procedure being done, it was then time for us to do one, and finally, in order to etch this new skill into our brains, we had to likewise teach it to someone else.

With your babies, learn to be parents who both actively watch their children struggle through an experience and who actively teach their children with hands-on instruction. When to employ passive observation versus active teaching is a matter of judgment. This is the reason parenting is called an art. There are no hard and fast rules, but you get better as the days go by. 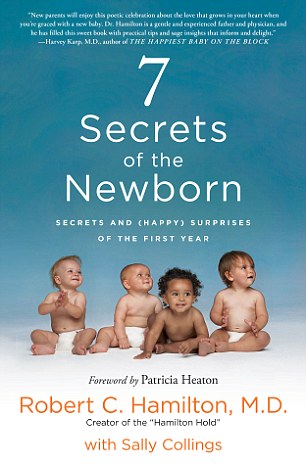 Guide: Seven Secrets of the Newborn: Secrets and (Happy) Surprises of the First Year is available now

Overattentive helicoptering as a parental style is a manifestation of inner anxiety and a lack of faith. Children are very sensitive to this ‘nervous Nellie’ kind of parenting and often react like everyone else reacts: with avoidance and disdain.

As writer and professor Jordan B. Peterson puts it, ‘Too much protection devastates the soul.’

So if you tend to fuss over details and are given to hovering over your children, stop now! Give them some breathing room. Micromanaging your children is never a good tactic, and it rarely works.

For those compulsive souls who can’t rein in their jittery tendencies, I recommend that they hurry out and have four or five more children as soon as possible.

Having a brood of children at your feet cures all helicoptering because nobody has that kind of energy or time to hover over them all!

Those who plan carefully have fewer surprises, but there is something delightful in those spontaneous moments where, without long deliberation, parents do something wild. Grabbing your kids and taking them to the beach on the spur of the moment — even on a day they are supposed to be in school — yields some of the most wonderful moments and memories your children will ever have. This applies to your less-than-one-year-old-baby too!

When it comes to parenting, you’ve also got to plan ahead, but every so often, let yourself do something that no one will expect you to do — and do it with your children.

And finally, for those tiger moms and dads who push their children ever onward to participate in mammoth athletic or musical endeavors — restrain yourselves. Change your aggressive ways before it is too late. Put down those flash cards for your four-month-old baby, and allow your child the time to relax and soak in her environment.

Parents were never meant to be talent agents. They’re called to nurture and encourage.

From 7 SECRETS OF THE NEWBORN: Secrets and (Happy) Surprises of the First Year by Robert C. Hamilton, M.D. with Sally Collings, copyright © 2018 by the author and reprinted by permission of St. Martin’s Press. On sale now.

HOW TO DO THE HAMILTON HOLD

Dr. Hamilton, who has more than 30 years experience as a pediatrician, demonstrated the ‘Hamilton Hold’ on his YouTube channel in 2015. The clip has chalked up more than 28 million views.

In the video, he picks up the child, folds his or her arms across the chest and uses his other hand to lift the baby’s bottom with the other. 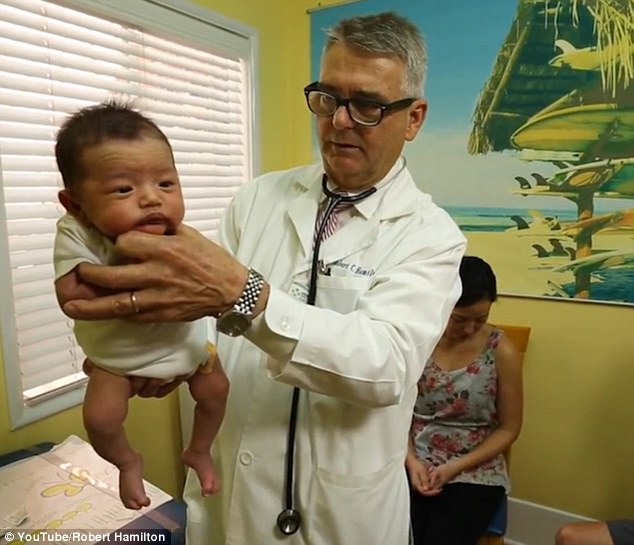 Like magic: Dr. Hamilton, who has more than 30 years experience as a pediatrician, demonstrated the ‘Hamilton Hold’ on his YouTube channel in 2015

Holding the baby at a 45-degree angle with both hands, he then lifts the baby up and down, rocks it back and forth and ‘shakes the little booty’.

‘Everything you do is very gentle, you don’t want to do any jerky motions ever,’ Dr. Hamilton advises.

‘You hold the child with the fleshy part of your hand [the palm] not the fingertips, and I am supporting his chin, which is why I am holding him at a 45-degree angle.’

He adds that the Hamilton Hold works best for babies up to three months because they become too heavy after that age.

1. Fold arms across the chest

2. Secure arms gently with one hand