Fed-up neighbours reveal the VERY cheeky nicknames they’ve given to locals who have annoyed them – from bin w****r to Mrs Blobby (so, what are people calling YOU?)

Love them or hate them, neighbours are a great source of gossip, and we sometimes know more about them than we’d like.

And if you think that your habits and behaviour go un-noticed by those living next to you, then this Mumsnet thread will probably make for alarming reading.

People from around the UK have taken to the forum to reveal their nicknames for people who live nearby, ranging from friendly-sounding monikers like ‘Happy Dog Lady’ and ‘Dancing Dan’ to harsher terms like ‘Creepy Clive,’ ‘Honey Monster’ and ‘Bin w*****.’

One particular neighbour who loved to listen to everybody’s business was renamed Nosy McNosy’ by annoyed residents.

Meanwhile, an unfriendly woman was dubbed the ‘Ice Queen.’ 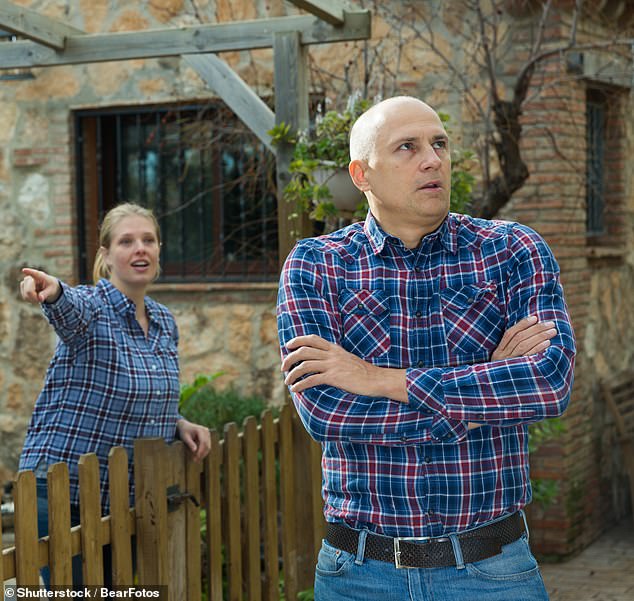 The thread was started by a resident explaining she’s had a few names for her neighbours over the years, which included: ‘The Lottery Queen,’ for a woman who won a few thousands at the lottery and liked to brag about it.

She also called one of her neighbours who liked to sit at his computer shirtless ‘Internet King’ and a large woman with a moustache ‘Honey Monster.’

One neighbour who is always shopping was renamed ‘Barry the Bag’ and another was called ‘Roman Helmet’ because of her hairdo.

Many neighbours earned themselves nicknames because of behaviours that annoyed others. 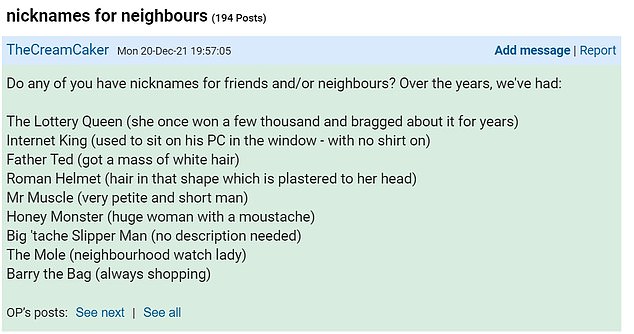 Some people revealed they called their neighbour ‘Flamboyant John’ while others referred to them as ‘Mr Muscle,’ Roman Helmet or Mrs Blobby

Another person admitted they referred to their neighbours as The Clampetts, after the very loud family featured in the 1960s sitcom The Beverly Hillbillies.

‘The loudest voices ever, two non-stop barking hounds,’ they explained.

They went on to say they are calling other residents of the street the Duke and Duchess because they ‘think they own the road.’

One person wrote:  ‘I live three doors down from Noisy Lady (although I also have less polite names for her). She is f****** loud. 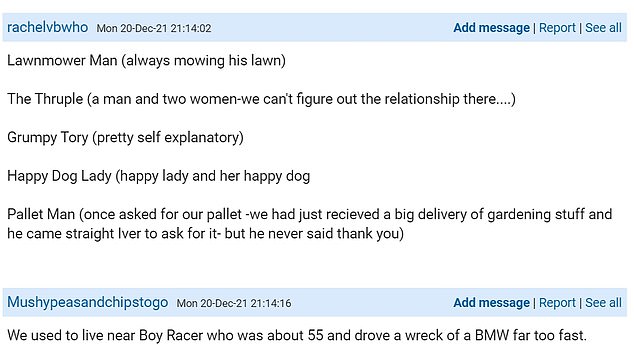 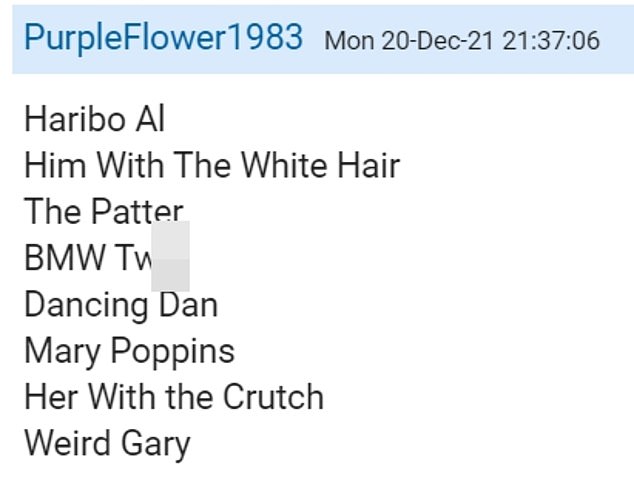 ‘She likes to have phone calls in her back garden that I can hear from inside my (front) bedroom with all the doors and windows shut. She has the world’s most annoying laugh and voice,’ they went on.

One person said there’s a Creepy Clive living nearby and that they wouldn’t leave children with him.

‘We have Flamboyant John, and my son at six called him this to his face, he seemed quite pleased,’ another recounted.

One person called their neighbours: ‘Haribo Al, Him with the White Hair, The Patter, BMW T***, Dancing Dan, Mary Poppins, Her With the Crutch and Weird Gary.’

Another revealed they called one of the women in their neighbouhood ‘Tash’ because they heard her talk about hair removal products for her chin on the phone.

One person dubbed a neighbour who liked to jog ‘Treadmill Charlie’ because he always runs very slowly.

More nicknames included Duke and Duchess, Nosy McNosy, Bin ‘W*****’ and Noisy Lady. Many were named after things they did that annoyed their neighbours