PETER OBORNE: Britain’s shame and Myanmar’s genocide of Rohingya Muslims that must be avenged

Regular readers will know I have long argued that Boris Johnson’s record as British Foreign Secretary was far more honourable and principled than his many critics have claimed.

But even I, one of Mr Johnson’s strongest supporters, must acknowledge the existence of one hideous blot on his record. On his watch, Britain failed to prevent Myanmar’s genocide of the Rohingya Muslims.

Exactly one year ago, we stood by as Myanmar commander-in-chief Min Aung Hlaing oversaw the deliberate killing and mass rape of thousands of defenceless men and women.

There were many warnings, including from the Daily Mail. British ministers ignored them. 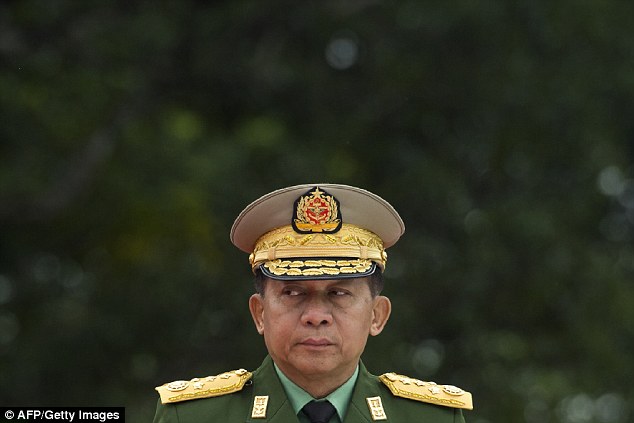 Exactly one year ago, we stood by as Myanmar commander-in-chief Min Aung Hlaing (pictured) oversaw the deliberate killing and mass rape of thousands of defenceless men and women

The truth is Britain failed to act to prevent the slaughter, then ignored the facts once the killing had begun.

Even when the genocidal violence was over, Boris Johnson and his ministers continued effectively to protect the odious regime of Myanmar leader Aung San Suu Kyi.

All genocides — think of Srebrenica nearly 25 years ago, or Rwanda before that — can only come about if the international community looks the other way and fails in its duty to protect the most vulnerable.

In Myanmar — the country between Bangladesh and Thailand, formerly known as Burma — we looked away.

Some will reasonably ask why I am singling out Britain for special blame. The answer is partly that as the former colonial power in that nation we have a unique moral responsibility.

All the more so because we sponsored the rise to power of Aung San Suu Kyi as civilian leader and an alternative to the long-standing military regime. But most of all we are responsible because we were ‘Penholder’ for Myanmar — in charge of overseeing policy — at the United Nations when the genocide was taking place.

Our response when Myanmar committed the ultimate crime was utterly pathetic. Indeed, it was worse than that.

Unwilling to upset our great ally and protege Aung San Suu Kyi, we resisted calls for an independent investigation into war crimes. Instead, we encouraged the Myanmar leader to carry out her own investigation.

Though as a civilian leader she does not control the military, a devastating UN report this week said Suu Kyi had failed to use her ‘position as head of government, or her moral authority, to stem or prevent the unfolding events’.

Imagine the outrage if the world had allowed the former Bosnian Serb leader Radovan Karadzic to reach his own judgment into whether his commander in chief Ratko Mladic was responsible for the Srebrenica massacre.

To be fair, Boris Johnson alone was not to blame for this act of moral negligence. Quite the contrary. I have no doubt at all that he was taking the advice of Foreign Office mandarins who believed that appeasing Suu Kyi’s generals would help Myanmar on its journey from dictatorship to democracy. 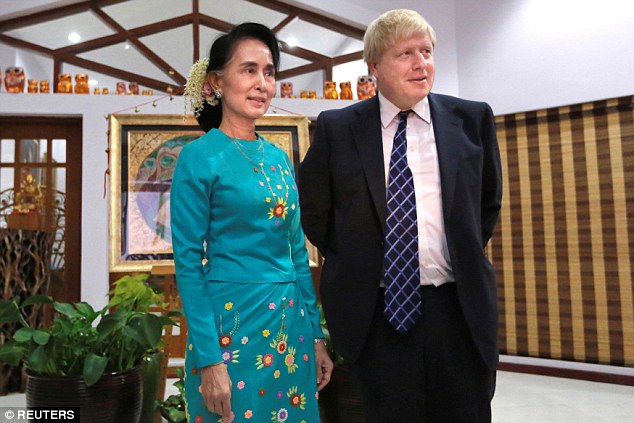 That policy has utterly failed. And the victims of that failure include many thousands dead, and hundreds of thousands who have been driven from their homes as a result of the macabre miscalculation by British officials.

Mr Johnson, in his defence, was simply taking the advice of the Foreign Office. But one thing is clear. Britain must now urgently re-examine our policy towards Myanmar.

This week, the perfect opportunity to do that came with the publication of the report from the UN fact-finding mission into the tragedy in Myanmar.

It gives me no pleasure to record that the UN team, which included well-respected experts in international law, confirmed my Daily Mail reports just under a year ago that genocide had taken place.

I shall never forget the horror of the stories I was told by survivors of the genocidal attacks.

First they opened fire on the men. ‘All the young men were shot at once,’ recalled Abdullah. ‘It took less than ten minutes.’

Then they shot dead the old women. Finally they raped the younger women — among them his own daughters — before burning them alive.

Crucially, the UN demands that we should prosecute Min Aung Hlaing and several of his follow generals at the International Criminal Court (ICC) at the Hague, just as Ratko Mladic was prosecuted after Srebenica. This week should have been the perfect chance for new Foreign Secretary Jeremy Hunt to distance himself from the morally abhorrent policy pursued by his predecessor Boris Johnson and his shoddy Foreign Office officials.

Sadly, Mr Hunt failed to do so. He has responded over Twitter with the announcement that he intends to travel to Myanmar in order to ‘seek answers’.

This is useless. The UN fact-finding mission was set the task — by Britain among other countries — of finding the answers. And it brought back the clear and unambiguous finding that Min Aung Hlaing and his generals committed the ultimate crime: they oversaw a genocide.

The British Foreign Secretary has no need to travel to Myanmar. He simply needs to make certain the UN recommendations are put into effect. First of all he, too, must use the word genocide — or at the very least make reference to the devastating evidence that points towards genocide.

He must demand that Myanmar grants the UN’s human rights agency access to the places where the killings occurred, and to the mass graves. Britain must at last support targeted sanctions against the generals responsible for the genocide.

Above all, we must use our status as Penholder for Myanmar at the UN to ensure that General Hlaing and his fellow criminals face justice at the ICC, for the crimes committed in Myanmar were every bit as hideous as those committed in the Srebrenica massacre.

Finally, Mr Hunt needs to deliver a rocket to the Foreign Office mandarins whose wretched policies helped allow a genocide to take place.

Future historians are certain to look back with utter dismay and incomprehension at Britain’s role. And Boris Johnson will always be vulnerable to the terrible charge that he allowed the Myanmar genocide to take place without hindrance or protest from Britain.

Above all, Jeremy Hunt must make it crystal clear to Myanmar’s murderous generals that they can never again act with impunity.

For make no mistake, given half a chance, they will do the same again.

Another minister on the anti-HS2 express

Momentum to block the white elephant HS2 high-speed rail project between London and Birmingham is gathering strength following my revelation last week that a Cabinet rebellion is brewing.

I understand that the name of another Cabinet minister should be added to the list of doubters.

Friends of Leader of the Commons, Andrea Leadsom, tell me she is concerned by spiralling costs associated with the project, as well as the devastating impact on the lives of residents affected by construction.

Yesterday’s announcement that London’s Crossrail is running over-budget and behind schedule is a salient warning about the seriousness of these concerns.

It is an open secret within Whitehall that the official HS2 budget of £56 billion gravely underestimates the true cost of the project, which is in urgent need of updating to reflect inflation within the construction industry. As I revealed last week, there are real doubts within 10 Downing Street. These were reflected when the Prime Minister omitted any mention of HS2 from her summary of her domestic agenda on her trip to South Africa last week.

At the very least, it makes sense at this stage for Mrs May to order a review of the project which will establish its true costs. At a time of continued economic austerity it would be madness to do otherwise.

Yesterday’s shock news that drinks giant Coca-Cola is to purchase superlative High Street chain Costa Coffee is an absolute disaster for Britain. Costa Coffee is a model employer and responsible payer of British taxes. International giant Coke is a notorious tax avoider and, in the eyes of many, a far from ethical company.

I believe that Business Secretary Greg Clark should intervene to block this appalling deal.