Petulant and nonsense: federal government hits back at Victoria’s claims of unfair treatment

Prime Minister Scott Morrison says Victoria’s claims he has favoured his home state of NSW with coronavirus support are nonsense while federal Treasurer Josh Frydenberg has accused the state government of being petulant.

The Victorian government says it had to “shame the federal government into doing their job” when it went into a short term lockdown in May and June. 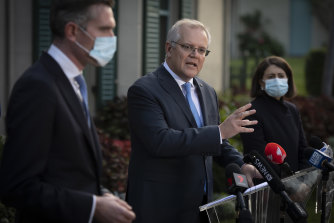 In contrast, when NSW Premier Gladys Berejiklian said on Tuesday that her state could stay in lockdown for at least another month, Mr Morrison stood beside her to announce extended support for income and business.

“Victorians are rightly sick and tired of having to beg for every scrap of support from the federal government,” a spokesman for Premier Daniel Andrews said on Tuesday night.

Mr Morrison hit back in a series of television interviews on Wednesday morning.

The two states were in different situations with NSW now headed into an extended period of lockdown, he said.

Accusations he was being unfair were “nonsense, it’s not true,” he told Seven’s Sunrise.

“The numbers just don’t bear it out. When Victoria needed Australia [in 2020], they were getting three-quarters of a billion dollars of support from the Commonwealth every week.”

“This package, together with the NSW government, is delivering half a billion a week. And the Commonwealth component of that is a quarter of a billion.”

Workers in NSW will get an increase in their income support from $500 to $600 a week while business owners will be offered a cash-flow boost of up to $10,000. This will flow to thousands of companies forced to close during the lockdowns across Greater Sydney under a package funded equally by the federal and NSW governments.

Mr Frydenberg, the most senior Victorian in the government, said this new support “template” could be used for any state that needed it, including Victoria should it have another COVID-19 outbreak that required a longer lockdown.

“The Victorian government, unfortunately, is being petulant, childish, and playing politics here because the facts tell a very clear story,” he told ABC Radio National Breakfast.

Asked how the package would go down with employers and workers in his home state, Mr Frydenberg replied he hoped people would “look at the facts, not the politicking”.

“We offered the Victorian government a 50-50 split when it came to business and income support, they rejected it,” he said.

Earlier, shadow treasurer Jim Chalmers said Victorians appeared to have been “left in the lurch because of the political stripe” of their state’s Labor government.

“Victorians have got every right to be filthy at the petty politics which was being played by Scott Morrison and Josh Frydenberg,” he said.