PITTSBURGH — Federal prosecutors said Monday they will seek the death penalty against the man accused of killing 11 people at a Pittsburgh synagogue. Two days after the shooting, suspect Robert Bowers appeared in court, shackled and in a wheelchair. He was formally charged with killing 11 people in what has been called the deadliest attack on Jews in U.S. history.

Bowers was shot and wounded in a gun battle with police Saturday. The massacre lasted about an hour, with those killed dying in the first five minutes.

Bowers killed six people in the atrium, two of whom were brothers, before entering the main sanctuary, where he shot five other congregants still sitting in their pews, killing four and wounding another. 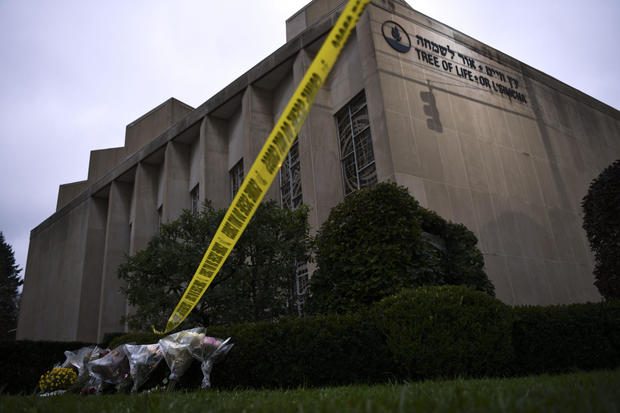 Police tape and memorial flowers are seen on Sun., Oct. 28, 2018, outside the Tree of Life Synagogue after a shooting there left 11 people dead in the Squirrel Hill neighborhood of Pittsburgh on Sat., Oct. 27, 2018.

He then made his way to the basement, where four members of the congregation were starting to pray. Two others were in the kitchen. They heard gunshots and hid in a supply closet. After the shots subsided, 88-year-old congregant Melvin Wax opened the door, becoming the final fatality.

Police in tactical gear encountered the gunman as he was attempting to flee.

“It looked almost like the line of deceased were all in a row,” said Dr. Keith Murray.

He was part of a SWAT team that made entry and found some of the deceased with gunshots to the back of the head.

“Initially there were five bodies in there. We started to survey them and we actually found one that was alive. I think she was in such shock I don’t even know if she was aware she was in shock, but she was holding on to one of her friends who was deceased,” Murray said.

Murray helped stabilize that woman, before heading upstairs where the gunman was barricaded, and an officer was down.

“He was saying to me obviously ‘I’ve been shot,'” Murray said. “He was going to die if we were not there.”

Six people were wounded in the mayhem, including four officers who are being hailed as heroes.