PLATELL’S PEOPLE: I’m fed up with these whingeing women MPs who are not serious about parliamentary work

Among the tens of thousands of protesters who gathered in London for the anti-Trump rally was the deputy leader of the Liberal Democrats, Jo Swinson.

She was pictured cradling her newborn son Gabriel in a sling, holding aloft her ‘Lib Dems against Trump’ banner.

All well and good — exercising her democratic right to protest and all that. But the same Ms Swinson is now at the heart of a row that could force the sacking of the Tory Chief Whip. 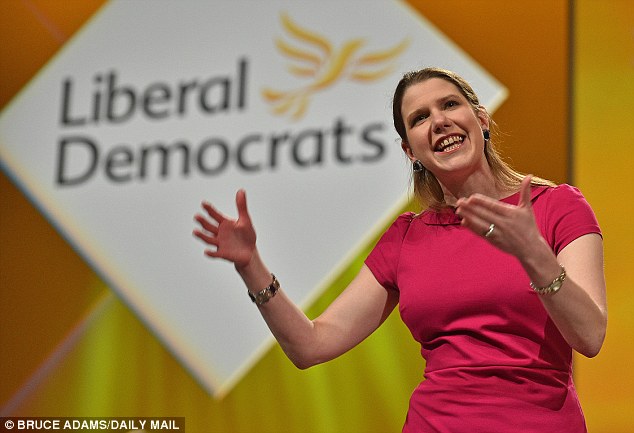 It centres around her decision to stay away from the Commons on maternity leave for the crucial Brexit debate on Tuesday that the Tories won by a mere six votes.

She did so under an arcane parliamentary convention called ‘pairing’, which allows MPs on different sides of the House to pair up and agree not to vote when one of them is away due to illness, travel or, as in Ms Swinson’s case, maternity leave.

Her ‘pair’, Tory chairman Brandon Lewis, broke the convention by voting on Tuesday night — apparently at Chief Whip Julian Smith’s request — while Ms Swinson was away.

And now the Lib Dems and Labour are demanding Smith’s resignation.

All of which leaves the huge question: if the Lib Dem deputy leader was able to take time off from her precious maternity leave to march against the U.S. President, why on earth couldn’t she manage to get to the House on a vote of such crucial importance?

Jo Swinson’s absence from the Commons merely feeds into a narrative gaining increasing currency among voters that female MPs indulge in special pleading and are not serious about their parliamentary work.

Only recently, Labour’s Danielle Rowley told the House she was late for a debate because she was ‘on her period’, for goodness sake. Too often women MPs gain notice for weeping in debates, or for hysterical rants such as the one we witnessed from the Tory’s Europhile Anna Soubry this week.

If she truly wants to be a trail-blazer for women in politics, she should re-examine her priorities — and decide whether attending a protest march against the President of a country that’s been our greatest ally was really more important than voting in a parliamentary debate that could have brought down our Prime Minister.

Sports Illustrated swimsuit model Mara Martin strode down the catwalk in a bikini, breastfeeding her five-month-old baby daughter — who was wearing a nappy and headphones, perhaps to protect her from the shrieks of awe-struck fashionistas.

A great moment for mums everywhere?

No. Just a cynical politically correct stunt in the middle of a flesh parade. 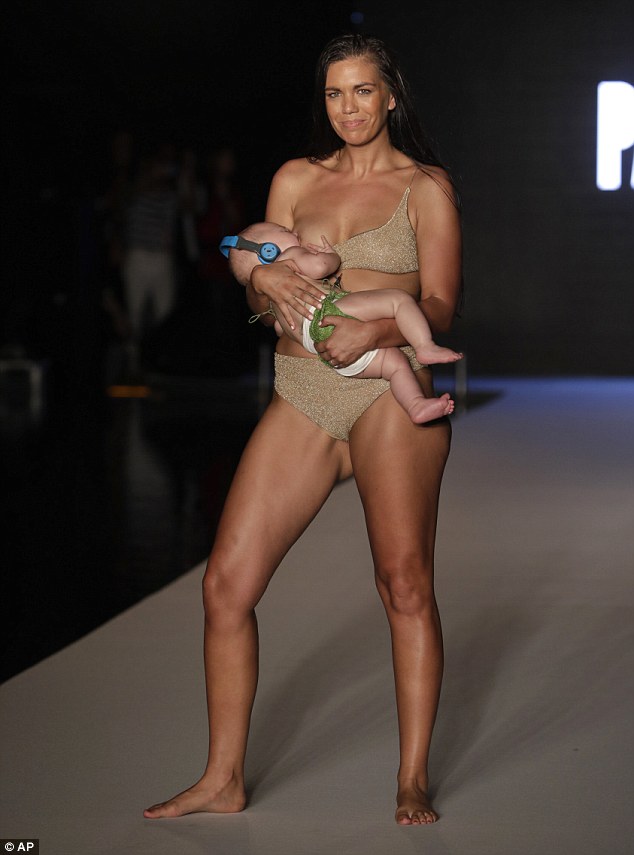 Mara Martin strode down the catwalk in a bikini, breastfeeding her baby daughter

Kate and William, married for seven years, have taken their three children on holiday in the Caribbean with her parents, Carole and Michael, and pregnant sister Pippa with her husband James. What a contrast to the sorry debacle that is the Markle family.

A picture of mother love

We’ve become inured to vacuous selfies, but the picture Clare O’Neill posted of herself battered and bruised in a hospital gown holding her four-week-old baby Eliza could not be more different.

She had clung on and been dragged along as thieves stole her car from her driveway and drove off with baby Eliza inside. They dumped the little mite at a health centre 45 minutes later.

Despite poor Clare’s broken teeth and bloodied face, it’s a picture of mother and child as moving as Michelangelo’s sculpture Pietà.

When Madonna adopted David Banda and Mercy James, both now 12, from an orphanage in Malawi, many, including me, raised doubts about how the children would turn out. Especially when she adopted twin girls Estere and Stelle, now five, from the same institution. Since then, she has built the first paediatric hospital in that poverty-stricken country which, locals say, has saved thousands of lives. On behalf of all of us doubters, Madonna, I apologise.

In interviews for the forthcoming ITV adaptation of Vanity Fair, its star Olivia Cooke complains she had to move to America to get a break into acting, as thespians here sneered at her Mancunian accent. It didn’t hold back Ben Kingsley, Ian McKellen and Christopher Eccleston now, did it, love?

It was billed as the Love Island for over-50s, yet the first episode of ITV’s Our Shirley Valentine Summer was missing a key ingredient — men.

Eight single celebrity women were shipped out to Greece — and spent the entire time whingeing about their betrayal by former partners.

Chris Tarrant’s ex-wife Ingrid admitted she hadn’t had sex for 11 years. No worries there, as the rapacious Italian Nancy Dell’Olio assured us she’d made up for the rest of them.

The sun may have been smiling, but I wasn’t — it was television to slit your wrists to.

Full-time partygoer Princess Eugenie and fiance Jack — whose job is ambassador for a tequila brand — are deigning to allow 1,200 ordinary folk to share their wedding in October in the grounds of Windsor Castle.

Who do they think they are? The cost of security to us taxpayers will run into millions. A little steep for the privilege of seeing the worst dressed mother-of-the-bride in history: that fatuous, freeloading frump Fergie.

Fashion designer Diane von Furstenberg says Viagra is the worst thing that happened to women of a certain age, as their men are empowered not only with a false sense of masculinity but an ability to perform all night. A woman I know slips half a crushed sleeping pill into her husband’s wine before they go to bed on his ‘blue tablet’ nights. Fifteen minutes later, the only thing that keeps her awake is his snoring.

Lord Lothario? I can’t believe it

My eyes were on stalks reading the lascivious tale of the former Tory chief executive Lord Prior’s home being desecrated with 16 pints of pigs’ blood by his enraged mistress of eight years.

She’d discovered the man she described as ‘a madman in bed’ in the arms of another woman.

Lord alive! Can this be the same meek, bald, bespectacled David Prior I used to work with under William Hague? He was the least likely Lothario in the world and happily married with two children. He’d blush scarlet if an even vaguely pretty girl entered the room.

Perhaps he suffered a classic mid-life crisis. He lost his Commons seat in 2001, and was then investigated and cleared for financial irregularities in his next job as chairman of an NHS trust.

Perhaps he had to re-establish his virility in the arms of a woman who gave every sign of being a bunny boiler.

Whatever the case, I just can’t get out of my head how happy he and his adorable wife Caroline and their children used to look together.

Victoria Beckham is selling the gloomy ‘funeral dress’ she wore at the Megs and Harry wedding for just £1,495, while Stella McCartney has flogged 23 white and 23 black copies of the evening dress she designed for Meghan to wear at the wedding party. Talk about cashing in on the royals!