Scott Morrison says he is hopeful Queensland will restart its campaign to host the 2032 Summer Games as he reiterated his support for the Australian bid when meeting with International Olympic officials in Japan.

The Prime Minister also told business leaders Australia shared Japan’s ambition of achieving net-zero emissions but he was focused on "how we get there and how that can be achieved" before he committed to those targets. 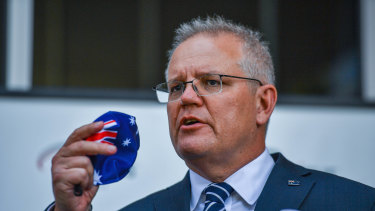 Mr Morrison met with International Olympic Committee president Thomas Bach and his Australian counterpart John Coates in Tokyo on Tuesday, where they discussed hosting the Olympics in a post-COVID world.

Behind closed doors, the Olympics supremos highlighted their willingness to engage with the Palaszczuk government over its bid, which was put on ice in May due to the coronavirus pandemic.

It is understood Mr Morrison said he was hopeful Queensland would soon restart its campaign but flagged it had been a busy time for the state with its recent election.

His comments come as Health Minister Greg Hunt said Australian athletes would "very likely" head to Japan next year for the Tokyo Games, with organisers moving to secure possible vaccines for participants. The Tokyo Games were originally due to start in July, but were postponed for a year due to the pandemic.

Mr Hunt said the federal government was supportive of the Games going ahead in a "COVID-safe way".

In his meetings with a powerful group of Japanese business leaders in Tokyo on Tuesday, Mr Morrison said renewable energy projects in Western Australia, Queensland and South Australia would be crucial to delivering environmental outcomes.

He is pushing for Japan to take Australian hydrogen exports during his trip to Tokyo to meet new Japanese Prime Minister Yoshihide Suga. The two countries will also sign a new defence pact opening the way for more joint military exercises throughout the region.

Mr Suga used his first policy speech in the Japanese diet as leader last month to commit to net-zero emissions by 2050. The decision has implications for Australia's LNG and coal exports, of which Japan is one of the biggest consumers.

Hydrogen exports are poised to be a big energy opportunity for Australia as Japan moves away from fossil fuels.

Mr Morrison said one of the most important challenges was the green energy transition. New technologies such as hydrogen partnerships in Victoria and the green ammonia project in South Australia would be crucial to overcoming those hurdles, he said.

He made it clear Australia shared Japan's aspiration of achieving net-zero emissions and was working on a road map to achieve that goal. However, the Morrison government has not set out a timeframe.

Mr Morrison said thanks to rich resource industries in WA and Queensland, Australia would continue to have a strong involvement in the economic development of both nations.

"The low emissions technologies of the future will be a very big part of our partnership going forward and both Australia and Japan want to achieve lower emissions energy into the future and indeed zero energy emissions," he said. "So programs like carbon capture and storage, in particular, will be very important for our success."

Mr Mimura, on behalf of the Japanese attendees, said the businessmen were focused on achieving principles based on the "three E's" of economy, energy and environment.

He said achieving this goal would be very challenging but would require the utilisation of energy sources such as hydrogen.

"In order to achieve this, hydrogen must come down in costs, and also … stability of supply must be ensured," Mr Mimura said.