Love re-match? Fergie and Prince Andrew put on a VERY united front as they go horse-riding together in Windsor – days before their daughter Eugenie walks down the aisle

Royal fans have long suggested that the Duke and Duchess of York should reunite and, just days before their daughter Eugenie’s wedding to Jack Brooksbank, the former couple look very comfortable in each other’s company.

Enjoying a canter around the grounds of Windsor Castle with daughter Beatrice, 30, Prince Andrew and Sarah Ferguson, who separated in 1992 after just six years of marriage and divorced four years later, were spotted laughing and joking ahead of their younger daughter’s big day.

In June this year, Fergie, 59, referred to her former husband, 58, as ‘family’ and the ex couple have been heavily involved in planning for Eugenie’s nuptials, which will take place on Friday 12th October. 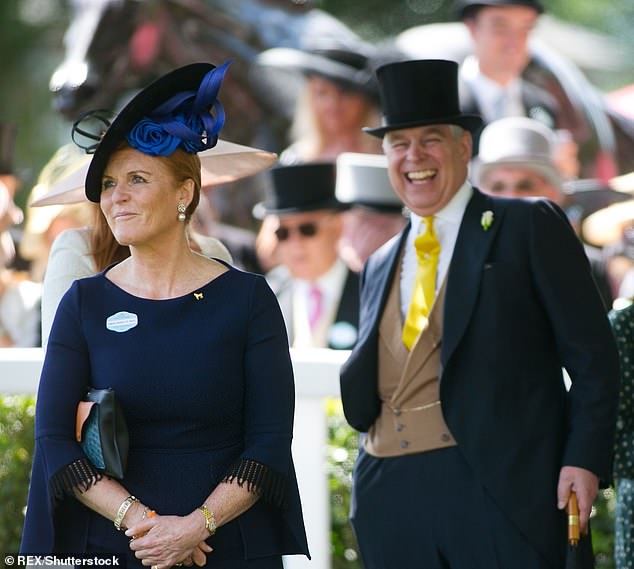 Happy together! The Duke and Duchess of York (pictured at Ascot in June) have remained close friends since their divorce in 1996, and have been spotted out riding together in Windsor ahead of their daughter Eugenie’s forthcoming wedding on Friday 12th October to Jack Brooksbank 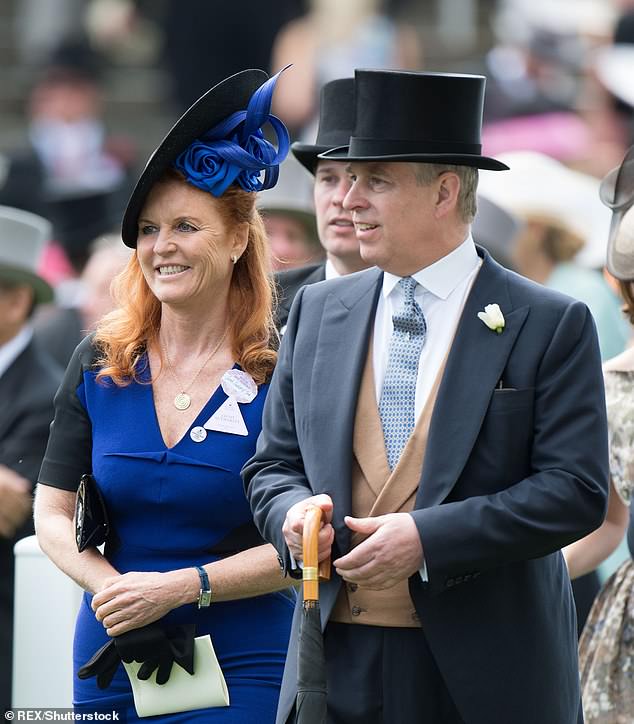 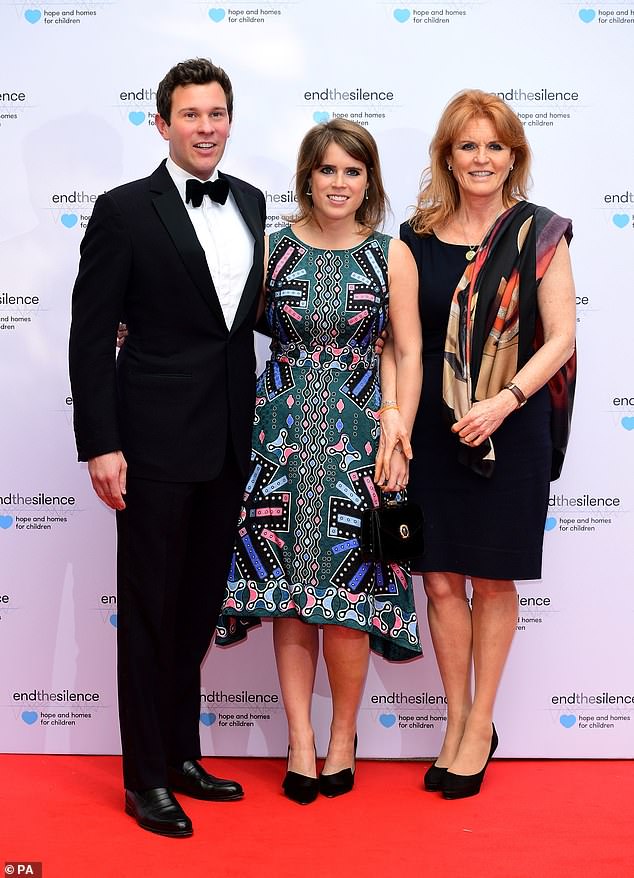 In June, the Duchess of York, 59, posted an image of herself at the races with her ex-husband, 58, and eldest daughter Beatrice, 30, calling them, my ‘family’, which prompted royal fans to urge the couple to re-unite formally (Pictured: Sarah Ferguson with Eugenie and Jack Brooksbank in May 2017)

Earlier this year, fans of the couple called for them to remarry after the Duchess described the royal as her ‘family’ in a gushing Instagram post.

The mother-of-two, 59, sent followers into overdrive when she shared a snap of the former couple laughing with their daughter Beatrice at Royal Ascot, saying: ‘Great day with my family’.

The snap prompted supporters to call for #royalwedding2019.

‘Just get remarried already,’ one advised the couple who divorced more than 20 years ago.

While the pair have remained on friendly terms, they seemed particularly close at this year’s Ascot and during one familiar moment Fergie leaned in to fix her ex husband’s lapel as they chatted.

Acccording to a body language expert and communication coach Robin Kermode Fergie’s picture shows ‘a couple deeply at ease with other and in sync.’:

‘It’s a real shared moment of fun,’ he told Femail. ‘Fergie’s use of the intimate “telling off” finger is spontaneous. 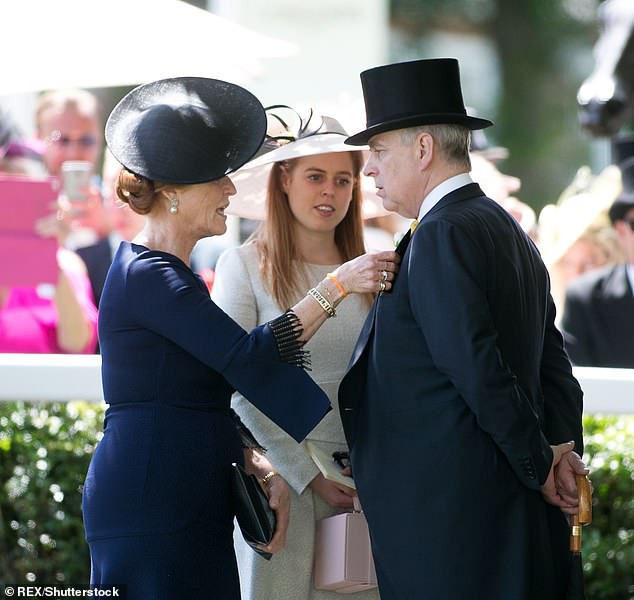 Close: The 59-year-old adjusts the tie of her former husband at Ascot this year 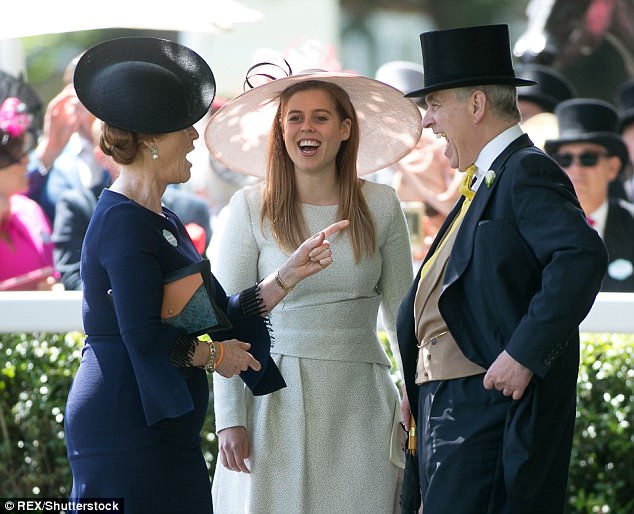 The Duchess of York, 59, sent fans into overdrive when she posted this snap on Instagram, saying she’d had a great day with her ‘family’ at Royal Ascot

‘Prince Andrew’s comment has brought peals of laughter from both women. Both are clearly relaxed and happy.’

Earlier this year, Fergie hinted that she may still carry a torch for her ex when she posted a gushing birthday tribute on tribute.

What does Fergie and Andrew’s body language reveal?

Both are mirroring each other’s laugh – with their eyes almost closed with laughter. Both have wide open smiles, showing open emotional abandonment. This is also mirrored by daughter. 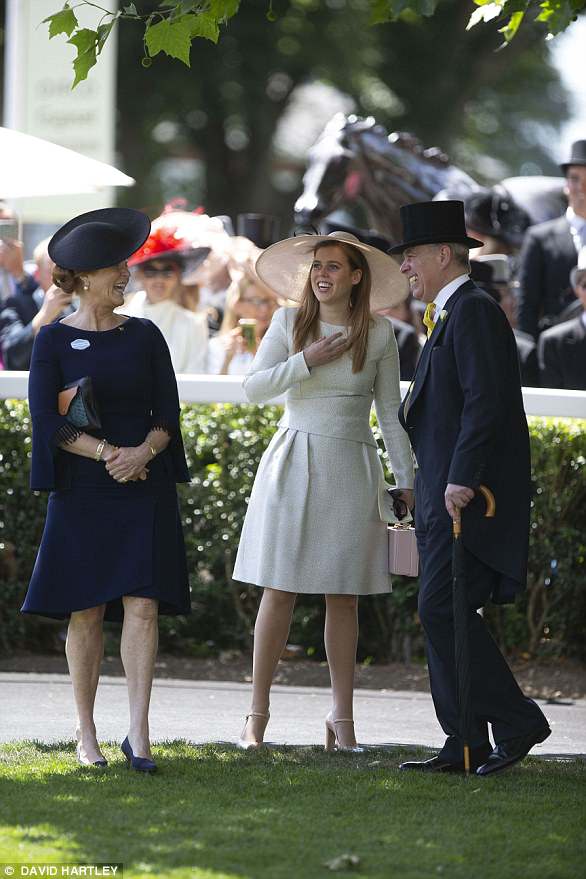 Happy family! Fergie and Andrew may have split more than two decades ago but they remain as close as ever

This is an intimate, caring gesture from Fergie as she straightens Andrew’s buttonhole.

At first glance, it might look that Andrew is reacting slightly like a schoolboy being told off for not having polished his shoes, but his facial expression shows he’s actually listening to an intimate comment between the two of them. 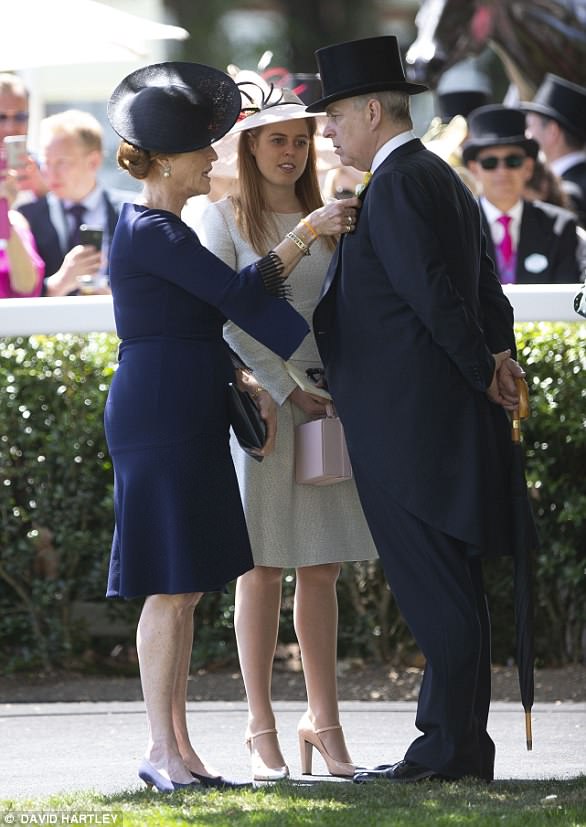 This could be a pic of many a connected family group at Ascot. The family unit seems strong with relaxed and strong eye contact all round.

They might have divorced over twenty years ago but the body language rituals performed by Andrew and his ex-wife Fergie are still almost identical to those they used during their engagement interviews.

Fergie has always been a fan of the over-congruent facial expression and age hasn’t changed this trait. It was a signature feature of the couple’s body language years ago and resembled the kind of comic gurning of big eyes and a huge open-mouthed smile that a parent does to keep its baby or small child amused.

The objective is to get the child to mirror the parent and smile back and Fergie repeated this face every time her eyes locked with Andrew during their engagement. It implied two things: firstly that she wasn’t entirely confident about her own looks and found face-pulling easier than the kind of romantic face-gazing that Meghan does with Harry.

Secondly it suggested Andrew might normally be a little serious or even pompous and that one of Fergie’s key roles in the relationship could be to change that.

It’s this history that makes Fergie’s body language with Andrew at Ascot so telling. She’s clearly being taken partly back into the royal fold to avoid hideously awkward scenes like her arrival at Meghan & Harry’s wedding from invading her own daughter’s autumn do.

But her effect on Andrew and his effect on her goes much further than normal ‘Brave face’ body language exes often perform for their kids.

Fergie is almost flirtatious with Andrew here, and he seems to respond in kind. Standing face-to-face she points a finger at his chest and smiles and Andrew’s jaw drops to the point of dislocation as he mirrors that gesture and smiles back. It’s as though she has made him come alive again after all those years of rather dour faces.

There is some suggestion of tentative tension in the way Fergie keeps her clutch bag held high to her torso, as though it is there as a safety barrier if her approaches aren’t well received, but the point where she performs a grooming gesture on her ex, rather spontaneously reaching out and touching his lapel as he talks is a hugely intimate signal.

It’s a quasi-maternal gesture of ownership and the way Andrew keeps his hands clasped behind his back and watches her face as she performs it suggests he’s either used to this behavior from her or at the very least enjoys it.

‘Happy birthday to the best man, father, friend Prince Andrew,’ she wrote, adding ‘Ooh, the best looking’ and sealed the message with a kiss.

In an interview with the Kyle and Jackie O show on Australian radio in 2016, the Duchess intriguingly revealed that she and Prince Andrew have never really split.

‘I always think, “have we really?”. We’re divorced to each other right now. We’ve never really left each other.’

‘You’re still together sort of,’ Kyle pressed her. ‘Yes,’ she replied. ‘I think the happily ever after…I’m actually writing a book about that too.

In another interview with Hello! magazine late last year she opened up about how she and Andrew have worked to provide a family unit for their two daughters despite their split.

‘A table can’t stand on three legs, really, so you have the Duke and I, and the two girls,’ she said.

While both Fergie and Andrew have been in other relationships since splitting, their lives have remained inextricably linked and neither has ever even come close to remarrying.

Fergie has continued to shareAndrew’s home at Royal Lodge in Windsor, where she has her own rooms along a separate hall.

And in 2014, the couple bough a £13million chalet in the ski resort of Verbier together.

Robin Kermode is a body language expert and founder of communication consultancy, Zone2.co.uk, and author of the best selling book SPEAK SO YOUR AUDIENCE WILL LISTEN, available from Amazon.