The Duke of Sussex looked dashing as he arrived at a garden party to celebrate 70 years of the Commonwealth today.

Prince Harry, 34, wore a dark navy suit, with a white shirt and plain blue tie for the event at Marlborough House in London, and was flying solo for the event while his wife Meghan is on maternity leave with their son, Archie.

During the garden party, Prince Harry presented awards to Commonwealth innovators who are pioneering solutions to international development challenges, including a sexual violence survivor from Samoa, and a Nigerian who has created apps to improve education for young people.

The appearance comes as royal courtiers suggest plans have been drawn up to the royal couple abroad for two to three years, combining their jobs as Commonwealth ambassadors with charity work and promoting Britain.

And trouble is also rumbling in the background, over the future of controversial Commonwealth chief Baroness Scotland, who is close to Harry, Meghan and Prince Charles, but was reportedly snubbed by the Queen in 2017. 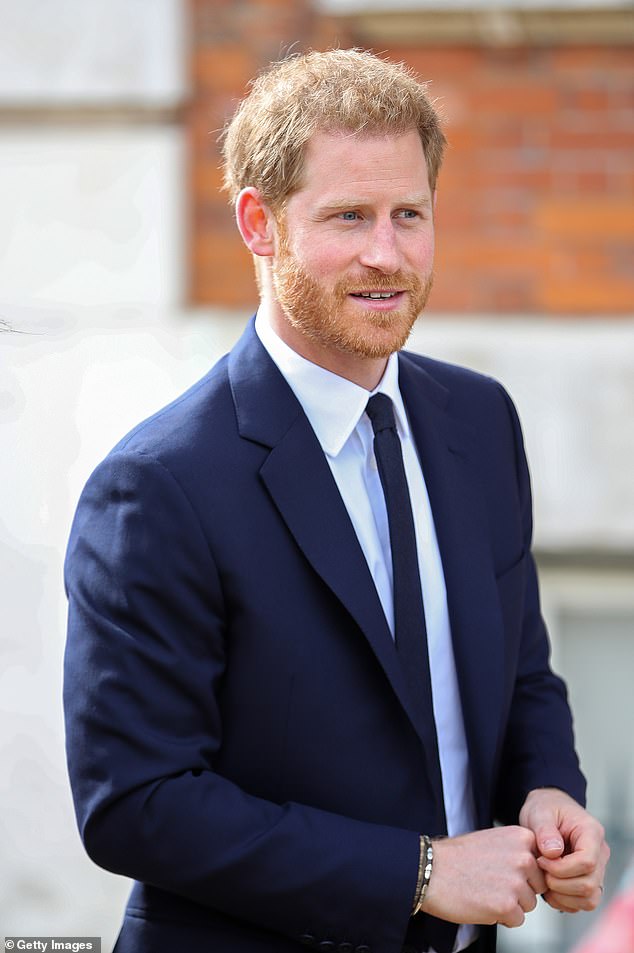 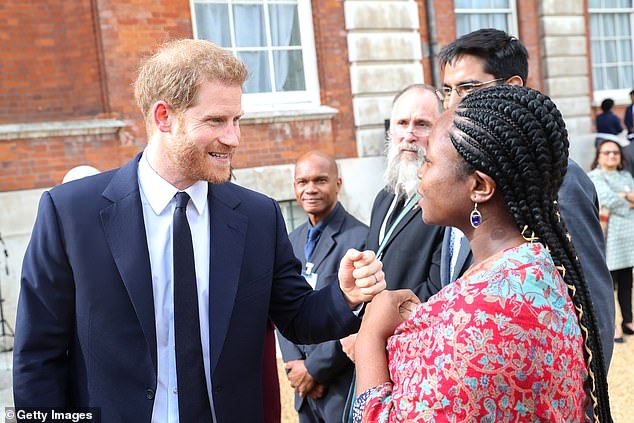 Prince Harry beamed as he appeared to fist-bump one woman at the garden party, which celebrated the 70th anniversary of the Commonwealth 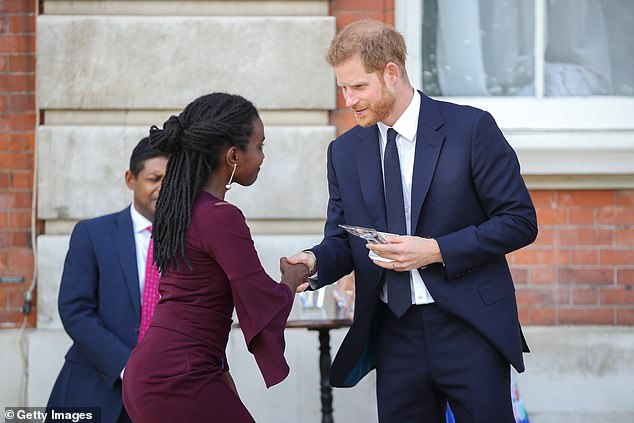 Rosette Muhoza, one of five winners of the Commonwealth Secretary-Generals Innovation for Sustainable Development Awards, curtseyed as she met Prince Harry

Lady Scotland, branded ‘Baroness Brazen’ and ‘Baroness Shameless’ for her lavish spending, wants a second four-year term as Secretary General, but diplomats have changed the rules to stop her being automatically re-appointed.

The Duke of Sussex looked smart as he arrived at the event to celebrate 70 years of the Commonwealth young people who are deemed to be making a difference in the world.

The royal, who was made a Commonwealth ambassador earlier this year, shook hands with Secretary-General of the Commonwealth The Rt. Hon Patricia Scotland QC as he arrived at the garden  party.

Once inside, Prince Harry appeared to be bonding with garden party attendees, at one stage jokingly lifted his fists in a ‘faux fighting’ pose.

Prince Harry, Duke Of Sussex arrives at a garden party to celebrate the 70th anniversary of the Commonwealth at Marlborough House 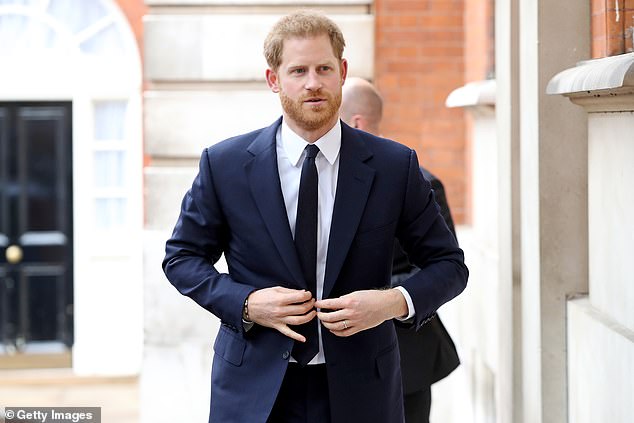 Prince Harry looked dashing as he arrived at the event. The royal was recently given the role of Commonwealth ambassador 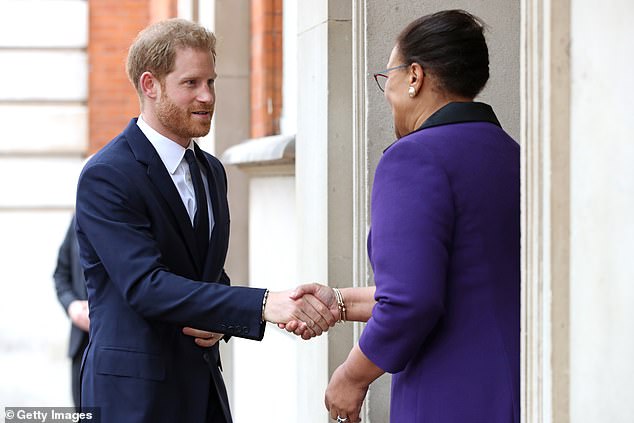 The royal was seen shaking hands with Secretary-General of the Commonwealth The Rt. Hon Patricia Scotland QC as he arrived at the garden party

Harry will meet a survivor of sexual violence from Samoa, and a Nigerian who has created apps to help improve education for children and young adults in Africa.

The Duke of Sussex will present awards to Commonwealth innovators who are pioneering solutions to international development challenges.

It aims to recognise and celebrate the contribution innovators in the public, private and voluntary sectors are making to sustainable development in the Commonwealth.

Selection was based on the impact, or potential, of the innovations to advance one or more of the 17 Sustainable Development Goals. 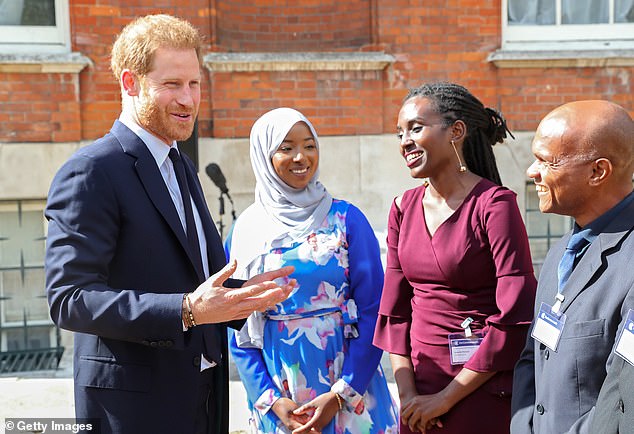 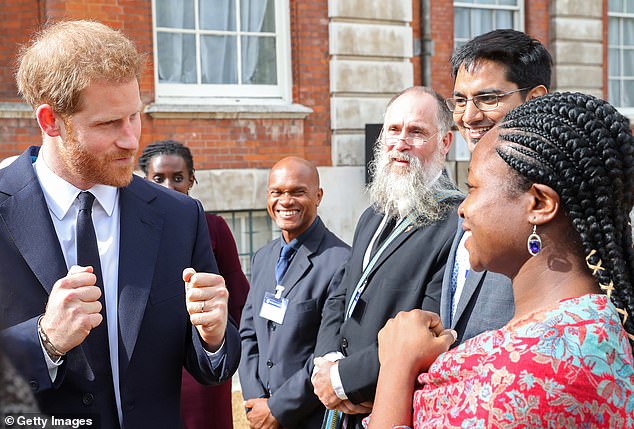 Fifteen winners were selected by an independent jury and they will each receive a trophy, a certificate and £2,000 in prize money.

Leilua Lino, who created a peace garden designed to support others who have experienced similar trauma to the sexual abuse she faced, and Elizabeth Kperrun, who is behind the educational mobile learning apps, are among the winners of the inaugural Commonwealth Secretary General’s Innovation for Sustainable Development Awards.

They will join other winners, who have been awarded in the categories of people, planet, prosperity, peace and partnership, at the garden party.

The awards hope to shine the spotlight on revolutionary ideas that could improve prosperity, protect the planet, promote peace and justice and encourage partnerships in the Commonwealth. 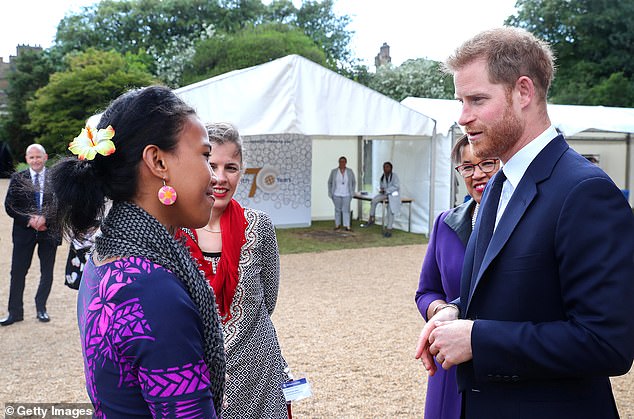 The new father was seen chatting to Leilua Lino, a sexual violence survivor who was a recipient of one of the innovation awards at the garden party 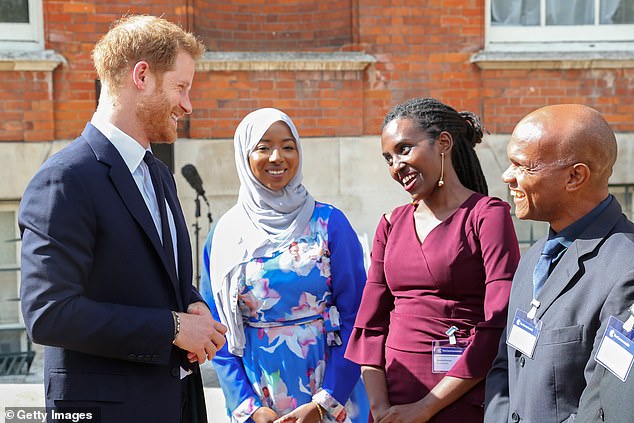 As Commonwealth Youth Ambassador, one of Harry’s roles is to work to create links between young people and youth leaders.

He will also encourage them to use Commonwealth platforms to address the social, economic, and environmental challenges of their generation.

Tonight’s awards celebrate outstanding young people from any of the 53 Commonwealth countries, with the winners considered to be developing solutions to tackle international challenges in areas such as human rights, women’s empowerment and climate change.

Harry will also meet representatives from a cross-section of Commonwealth organisations, and groups of young people who are said to be making significant contributions to the future of the Commonwealth.

Earlier this week, a leaked copy of a secret report into the Commonwealth Secretariat highlighted ‘deep concerns’ about the way it is run, and called for more ‘transparency and accountability’ – and extra checks on Baroness Scotland’s performance.

But this risks a split between Prince Charles and the Queen, who was alleged to have snubbed Baroness Scotland in 2017. 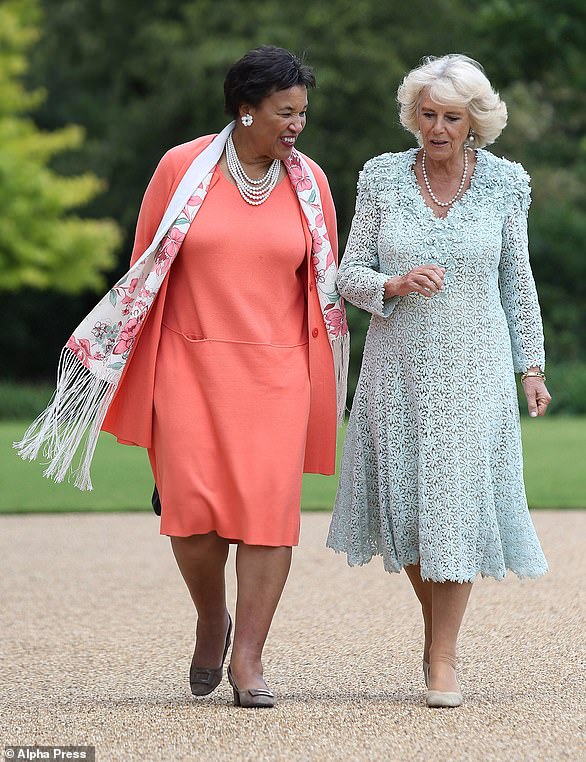 The baroness has met Charles and Camilla on a number of occasions and is said to ‘get on famously’ with the Duchess of Cornwall.

Lady Scotland welcomed Camilla when she attended a garden party at the secretariat’s palatial London HQ Marlborough House on Wednesday.

She has also forged close links with Prince Harry and wife Meghan. She hosted a reception at Marlborough House last year when the couple were made joint Commonwealth Youth Ambassadors. Prince Harry is due to attend an event there tomorrow.

Two months ago, the baroness praised the Duchess of Sussex as an ‘inspiration’ for youngsters in the Commonwealth. 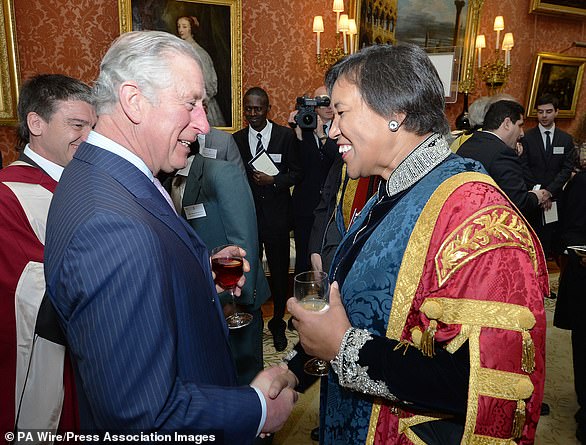 She said people were ‘very excited’ about Meghan’s mixed-race background, agreeing many would say she ‘looks like me’.

Lady Scotland’s closeness to Charles, Camilla and the Sussexes is in contrast to reports of less intimate relations with the Queen.

Her Majesty was conspicuously absent from the 2017 London reception to celebrate Commonwealth Day. The BBC said at the time her absence was linked to her ‘displeasure at the way the Commonwealth Secretariat was being run.’

However, Buckingham Palace denied this and insisted the reason was ‘logistics not displeasure with Lady Scotland’.

A senior diplomat told the Mail: ‘The leaked report shows the strength of feeling about Baroness Scotland’s determination to stay in post.’

Earlier this week it was announced Prince Harry will travel to Africa with Meghan Markle and their new son Archie to finish the anti-landmine work Princess Diana started.

As part of the couple’s autumn tour, Harry will journey to Angola in a bid to complete his late mother’s legacy of charity work for the HALO Trust.

Diana famously visited Angola in January 1997, just months before her tragic death in a car crash in Paris in August that year.

The six-month ‘secondment’ to Africa is expected to take place in the next two to three years and see the couple visit Malawi, South Africa and possibly Botswana to extend work of his charity Sentebale.

Botawana, which Harry has previously described as his ‘second home’, is considered one of the likely stops in their itinerary, especially as it is a Commonwealth country as the Queen appointed her grandson one of its youth ambassadors last year and sees him as an important proponent of her legacy. 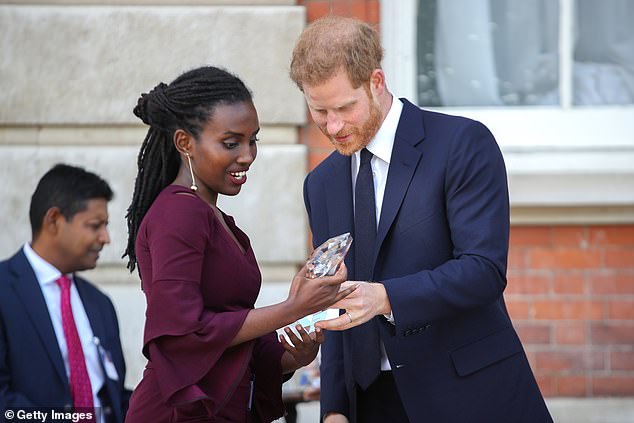 Prince Harry presented awards to young people from Commonwealth countries, including Rosette Muhoza, one of five winners of the Commonwealth Secretary-Generals Innovation for Sustainable Development Awards 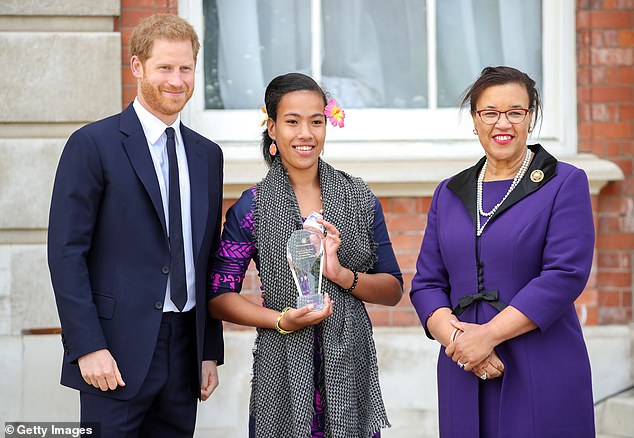 Prince Harry presented an award to Leilua Lino, a sexual abuse survivor who created peace garden designed to support others who have experienced similar trauma