Princess Diana’s brother Charles Spencer has shared a sweet throwback photograph of his grandfather and his siblings as children – and royal fans have gone wild over his great aunt’s striking resemblance to his sister, the late Princess of Wales.

Charles, Earl Spencer, 57, took to Instagram yesterday evening to share a black and white snap of his grandfather Jack Spencer standing next to his sister Lavinia and brother, Cecil in front of a large doorway.

The photo, which was taken in 1902, showed the trio stood hand-in-hand before they headed to a fancy dress party.

But it was Lavinia who donned a white frock and was stood inbetween the two boys who drew the most attention due to her resemblance to a young Princess Diana.

‘Don’t you find that Diana as a child looked like great-aunt Lavinia?’ wrote one, while a second commented: ‘Gorgeous! I think Diana at a similar age looked like your great aunt.’ 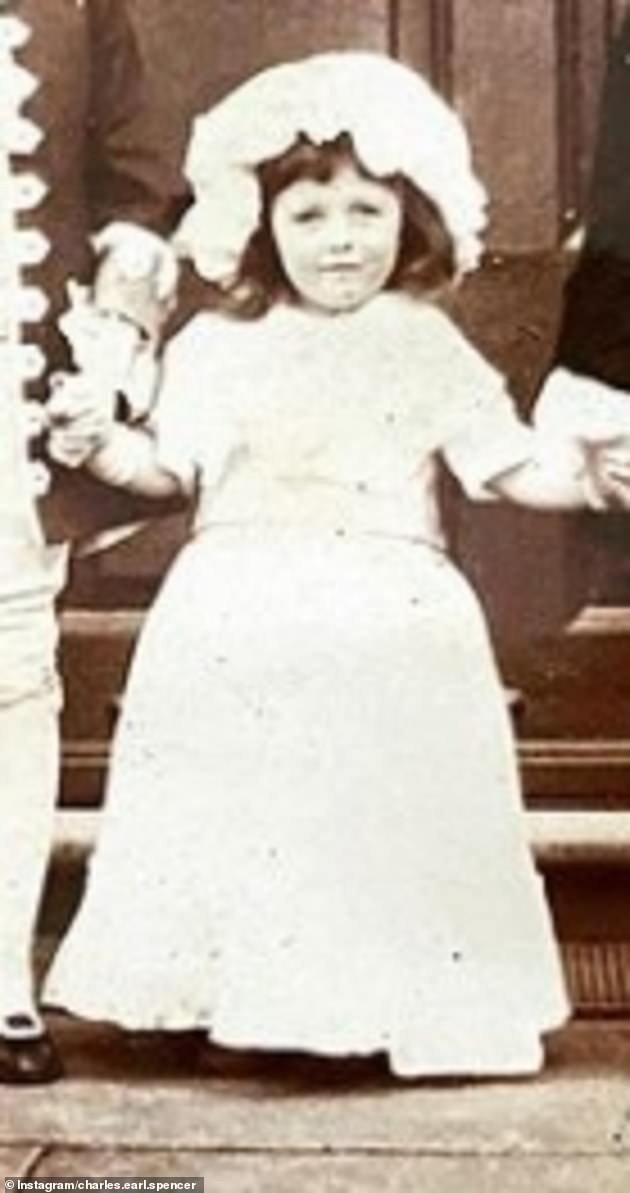 Princess Diana’s brother Charles Spencer, 57,  has shared a sweet throwback photograph of his grandfather and his siblings as children – and royal fans have gone wild over his great aunt’s  (centre) striking resemblance to his sister, the late Princess of Wales. 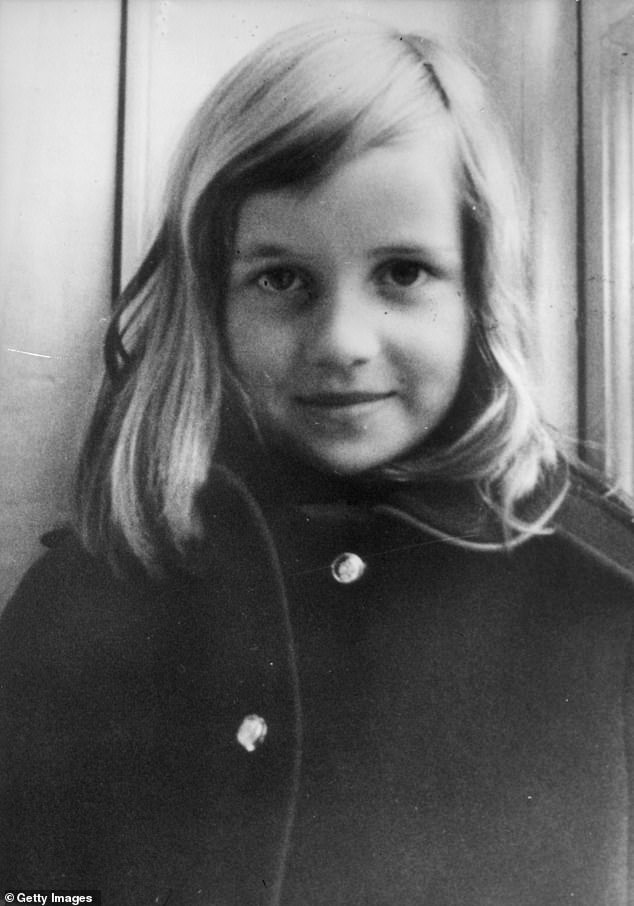 People took to the comments on Instagram and appeared shocked at how alike a young Diana was to her great aunt. Pictured, 1 January, 1965

A third added: ‘To my eye, you and your sisters resemble Lavina. Your nephew, William appears to resemble Jack. Beautiful photo!’

Alongside the post, Earl Spencer penned: ‘Lavinia married a local aristocrat, and served the late Queen Mother as a Lady In Waiting, when the Queen Mother was Duchess of York: she and Lavinia were childhood friends.

‘Lavinia’s son Lukie played cricket for England a couple of times. She was a chain smoker, and died in her mid-50s.

‘Cecil (who, like me, was born on 20 May) won a chestful of medals as a Motor Torpedo Boat captain in World War 1, and died aged 33 after being thrown from his polo pony. 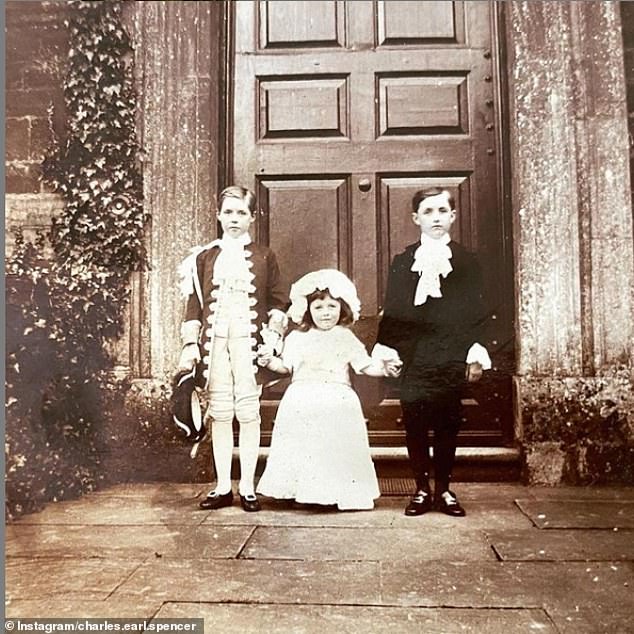 Alongside the photo, Earl Spencer penned: ‘My grandfather, great aunt and great uncle – Jack, Lavinia and Cecil Spencer – setting off for a fancy dress party in 1902’ 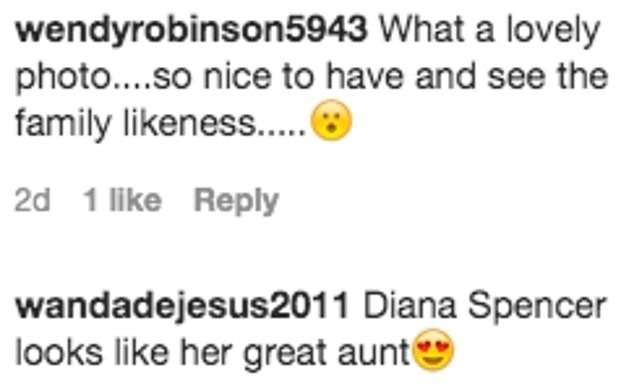 Taking to the comments section, one person penned: ‘Don’t you find that Diana as a child looked like great-aunt Lavinia?’ (pictured)

‘I’ve today bought this trio’s baby brother George’s diary, written between 1918-20, and this is one of the photographs of his siblings that I found in the back part of it. This photograph was taken at Dallington House, near @althorphouse.’

Meanwhile, in the snap, both boys look smart before their evening out, with one sporting a longline coat, knee-length trousers.

He added some long socks, smart buckle shoes and appeared to be holding a book in his free hand.

The other donned an all black ensemble which included white ruffle detail at the neck.

Others who took to the comment section wrote: ‘What a lovely photo. So nice to have and see the family likeness.’ 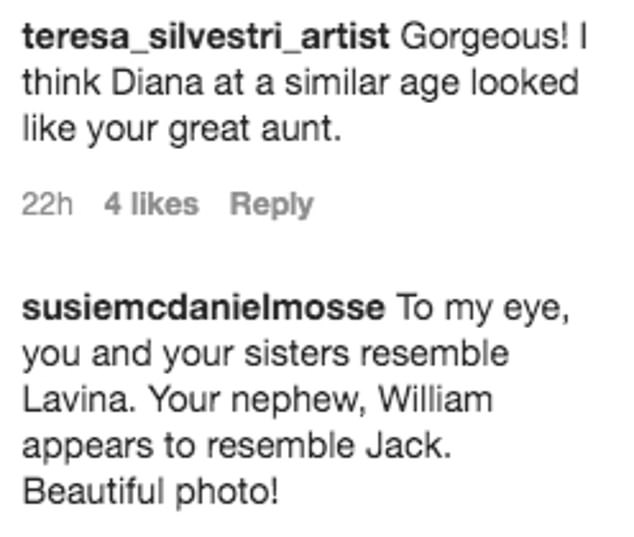 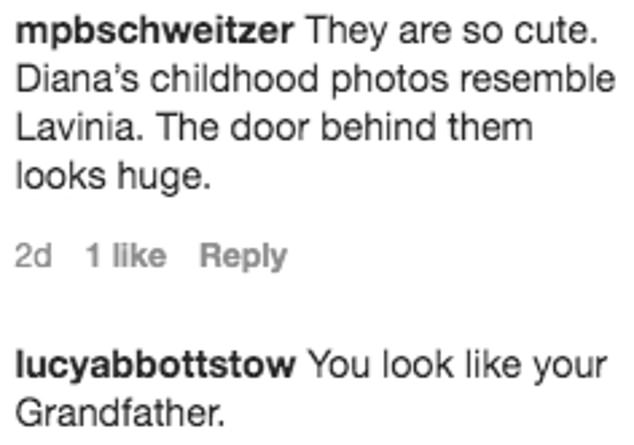 Another person commented: ‘Gorgeous! I think Diana at a similar age looked like your great aunt’ (pictured)