Putin’s defiant two fingers to the world: The TV lies of the Skripal murder suspects were so BLATANT they’d have been amusing – if what they told us about Russia’s leader weren’t so chilling says OWEN MATTHEWS

Over the years, the world has heard a good deal of barefaced lying from Vladimir Putin and his acolytes. They lied about the London murder of Russian defector Alexander Litvinenko with radioactive polonium in 2006.

Lied about the fact Russian soldiers had occupied the Crimean peninsula in 2014. And in the same year lied about the state-sponsored doping of the Russian Winter Olympics team that drew worldwide condemnation.

When, also in 2014, a Russian rocket downed a civilian airliner over Eastern Ukraine, leaving almost 300 dead, they lied again. Just as they lied over their involvement in hacking attacks on the 2016 U.S. elections that saw Donald Trump voted in to power.

But yesterday’s protestations of innocence on Russian television by Skripal poisoning suspects Alexander Petrov and Ruslan Boshirov — surely among the world’s most unconvincing liars — took the Kremlin’s duplicity to a new level. 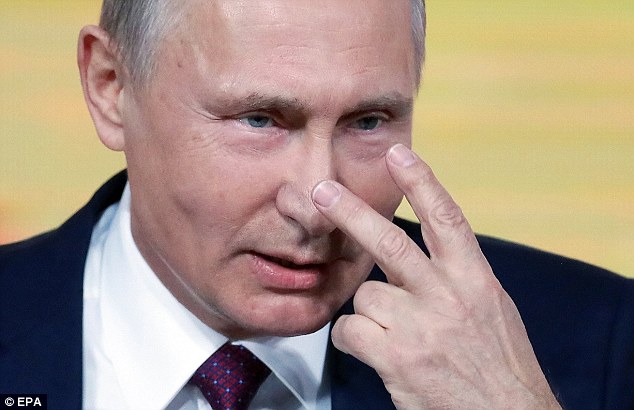 Their claim that they were just visiting Salisbury because ‘friends have been suggesting for some time that we visit this wonderful city’ could not have been less believable.

The notion that, when they arrived at the train station, there was ‘too much snow’ to get to the ‘world famous 123 metre spire of Salisbury cathedral’ is risible.

Quite apart from the fact that there was almost no snow in the CCTV footage of their stroll through Salisbury, Russians, of all people, are not exactly unused to snow.

And their laughable explanation for being spotted a mile from the train station — in the opposite direction from the cathedral and very close to Sergei Skripal’s house — was that they were lost. Two days in a row. ‘You can’t imagine what our lives have become . . . our faces are on the television,’ whined Boshirov. ‘The real poisoners owe us an apology.’

The lying here goes far beyond the usual diplomatic obfuscations that many governments use to cover up the activities of their intelligence services. It is so blatant, so bad, that it would be amusing, if what it reveals about Putin wasn’t so chilling.

Because it is the very absurdity of this concocted story — the hymns of praise to the beauties of the cathedral were literally cut and pasted from Wikipedia — that we should worry about.

It is a calculated insult to the British Government: Putin’s two fingers to the world. He simply does not care what anyone thinks. It is lying as a form of aggression.

No one in Russian state circles — least of all Margarita Simonyan, the head of the state-owned RT network who interviewed the pair — actually expected Petrov and Boshirov’s story to be believed.

The tale of two Russian fans of medieval architecture travelling to the UK only to be turned back by a non-existent dusting of snow is beyond ludicrous.

But that’s the point. Putin doesn’t lie simply to deceive. He lies to assert his power over truth itself.

He’s like a playground bully who denies that he’s stolen a pencil case that he’s actually holding in his hand. For this kind of bully, ‘I didn’t steal your stuff’ really means: ‘I stole it and I don’t care that you know it. I’m stronger than you. And you can’t touch me.’

The message is that the truth is what Putin says it is.

It has been suggested that the two poisoners, Petrov and Boshirov, were paraded on television for Russian domestic consumption to give credibility to Putin’s denials earlier this week that they were part of his intelligence apparatus.

‘These are civilians,’ Putin had said of the two hitmen. ‘I hope they come forward and explain themselves.’ And sure enough, a day later, they miraculously — if somewhat nervously — appeared.

But the argument that the Petrov and Boshirov show was intended to convince a domestic Russian audience of the duo’s innocence doesn’t hold water. Indeed, the assassins’ story was not remotely any more plausible to Russian viewers than it was to those in the West.

What Petrov’s and Boshirov’s cock-and-bull tale was intended to do was display Putin’s defiance and strength. The Kremlin-controlled broadcasters and press continually tell Putin’s subjects that the Western media is a farrago of propaganda, and that Western countries regularly order extra-judicial killings, invade sovereign countries and use hackers to subvert Russia.

Putin’s clear message is: If the West can do it, why can’t we? Let us not forget that the attempted murder of Skripal, a former military intelligence officer who betrayed his country, was a mafia-style attack using chemical weapons on British soil.

An innocent Briton, Dawn Sturgess, lost her life, and intelligence estimates are that the quantity of the nerve agent novichok carried by the terrorist tourists could have killed 4,000 people.

No vital Russian interest was at stake — only the sinister secret service code of death to traitors which Putin has publicly proclaimed. ‘Traitors will choke on their 30 pieces of silver,’ he warned in 2010 when Skripal and others were released from Russian captivity in a spy swap.

Eight years later, a team of executioners from Skripal’s old outfit, the GRU, acted on the president’s words — in the opinion of the British Government — with Putin’s personal approval.

We have been here before. In 2006, when another former Russian spy and British citizen Litvinenko was fatally poisoned with polonium, the Kremlin’s response was more or less the same: deny, distract with a slew of ridiculous alternative conspiracy theories — and reward the perpetrators (one, Andrei Lugovoi, even became a member of the Russian parliament).

In the intervening 12 years, despite international condemnation, multiple rounds of economic sanctions and economic suffering imposed on the Russian people, little has changed. The only difference is that yesterday’s lies were even more brazen.

It’s time to recognise that Putin will never apologise, never explain, and continue to scoff at international law.

Under his rule, Russia has become a rogue state. Here, he flaunts his defiance at countries which do abide by the rules to boost his popularity back home and dare an enfeebled West to take him on.

The U.S. is already on track to brand Russia a state sponsor of terror, on a par with Iran and North Korea.

On August 22, the U.S. state and treasury departments introduced a package of sanctions to punish Russia for illegal use of chemical weapons in the Skripal attack. The measures include a ban on the export of high technology to Russia and restrictions on Russian state companies doing business in the West.

The U.S. demands that Russia allows an international team of inspectors to visit its top-secret chemical weapons facilities within 90 days, or face far more serious sanctions that will effectively cut Russia off from the world economy.

The chances of Putin accepting inspectors are rather less than zero. Come November, the U.S. is likely officially to brand Putin an international pariah.

Another, separate package of sanctions against Russia is also making its way through the U.S. Congress, with strong cross-party support.

Even Donald Trump, who in July was remarkably friendly towards Putin, has abandoned his rapprochement with Russia and yesterday signed an executive order stipulating economic punishment for countries that interfered in U.S. elections.

Britain needs to follow suit, give up its wide-eyed acceptance of the billions of roubles being laundered by Russian oligarchs and gangsters in London, and impose the kind of measures against Kremlin-connected companies and individuals doing business in Britain that Putin will actually notice.

No one, of course, is under any illusions that sanctions will change his behaviour. But if the international rules-based order is to have any future, crime must be followed by punishment.