You design and create the spaces people live in – does your job give you a tremendous sense of power?

Well … responsibility, risk … I don’t know whether power ever feels as good as you think. 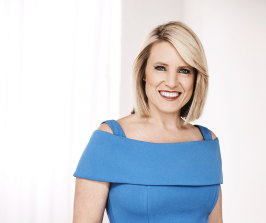 Wendy Moore is the new host of Selling Houses Australia.

Yes, heavy lies the head that wears the crown. I always say the most interesting interviewees are the ones who actually have a useful skill besides being a TV star – into which category you certainly fit. If I were to want to become an interior designer – and don’t rule it out – how would I go about it?

I don’t know if I’m the best example of how to get there, to be honest. I mean, most of my career has been an evolution rather than a decided direction. I’m a journalist by trade and I started writing about interiors in my early 20s, and that’s when I fell in love with it. So my interiors education is not your average interiors education. There are some great colleges, a lot of places where you can study, but I’ve come at it from a completely different angle. And I think that’s the thing with interiors – it is something you can come into from all different ways. You can start doing it and then fall in love with it. A lot of people I work with started doing it for their own home and then fell in love with it. And it’s not just about style and vision, it’s also about project management, so you fall in love with the process of it as well as the selections and the vision of what you want something to look like.

Presumably, when you did fall in love with it, you weren’t thinking “this is my pathway to a TV gig”.

No! To be honest, I started doing TV because at that stage I was editor of an interiors magazine. The magazine was going really well, we were moving into the number one position, and I was consulting with the show, helping them get the show set up, and I thought if I just keep doing them favours, I might get promotion for the magazine.

But now you’ve graduated to the screen, stardom is on its way, naturally.

I can’t imagine TV being my main gig because the transient nature of TV and the pressure and the amount of competition would be really intimidating. I don’t think I could have chosen it as my main gig.

But in the job that you do have, do you feel a lot of pressure? I mean, you’re making decisions that will have a big impact on people’s lives, which I imagine could be pretty intimidating as well.

You do, and particularly on Selling Houses, because people come to the show because they’re in a pretty dire situation. It’s different to other shows where it’s an opportunity or it’s a dream: it’s really a moment of desperation, and all of them have got a story that being able to renovate and sell their house will change their lives. And they’re so grateful for what you do. They see how hard everyone works and it’s quite overwhelming for them. You actually get to know them really well in a short amount of time.

It must give you – and everyone who works on the show – such a buzz to see how happy you’ve made someone. It seems like a real feel-good job.

It’s such a feel-good job! And you know, as a crew, after the reno we’re always keeping in touch with what’s happening with the family, have they sold the house – everyone’s really invested in what happens after the renovation. It’s so lovely, and you do feel quite connected to them. It stays with you for a while.

How quickly did you find the on-screen chemistry between you and your co-stars?

Well that was helped by Covid, actually.

Thank god something was.

I know, it was the silver lining. We all got stuck together for long periods of time, so we’d spend a lot of time cooking dinner together, Dennis and I started running together, Andrew and Dennis would walk every day. We just spent so much time together that we kind of fast-tracked the getting-to-know-you period outside of work, which was nice.

What a lovely picture you paint. It makes me want to work on your show.

It’s really lovely to work on a nice show.

No, the biggest difference is the time frame. You have fewer options because you have to go with what can be done in a certain time and what’s available in a certain time. That’s probably the biggest difference. But the decisions you make about how that space, that room, is going to be used, are pretty much exactly the same. I think viewers of the show, as well as people who would walk through a home – if a room isn’t designed well to live in, even if you’re not an interior designer, you’ll feel a level of discomfort with it anyway. I think if that was showing up on-screen, if it wasn’t well thought out for living in, on-screen, I think the viewers would know it’s not right, even if they couldn’t articulate it.