She really IS down to earth! Dutch Queen Maxima slips off her heels to go barefoot on the basketball court as she meets young players in Schiedam

Queen Maxima is rarely parted from her towering stilettos.

But the Dutch queen, 47, gamely slipped off her heels to go barefoot on Thursday when she joined young basketball players on court while paying a visit to the non-profit YETS Foundation in Schiedam, in south Holland.

The Queen was snapped beaming as she watched the children get stuck into an energetic match.

The foundation works to give disadvantaged young people access to sports. 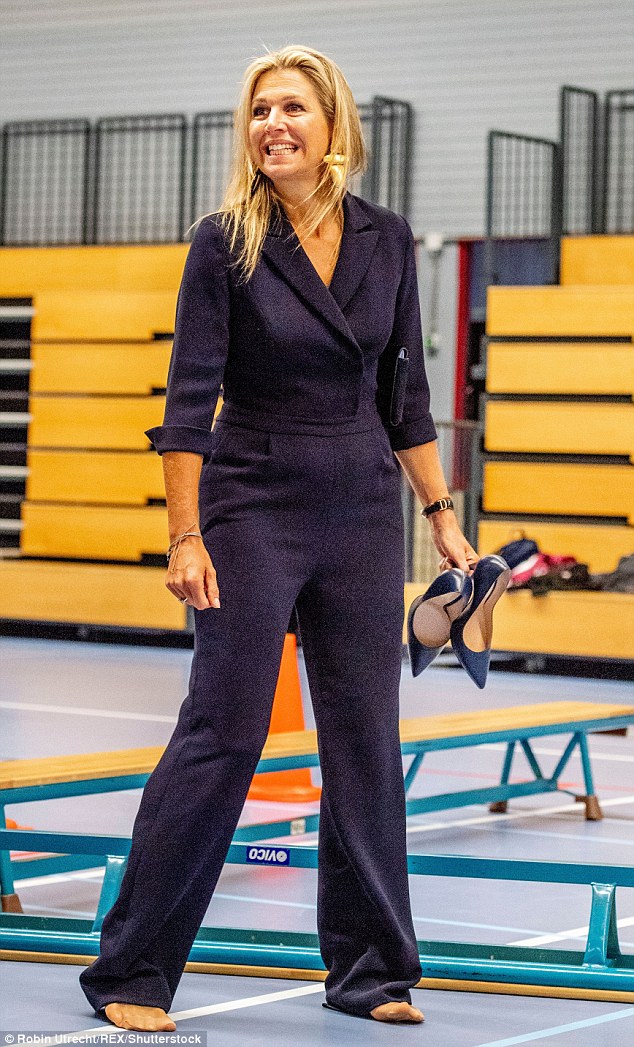 Fancy footwork: Queen Maxima showed how down to earth she really is after slipping off her high heels to wander around the basketball court at the local YETS Foundation in Schiedam 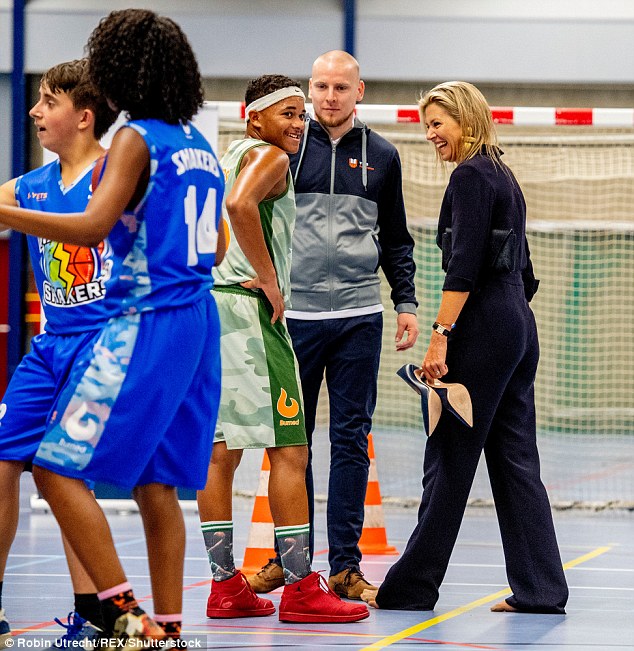 Sports fan: The royal was shared a joke with one player and YETS founder Peter Ottens who joined her by the side of the court while she carried her shoes in hand 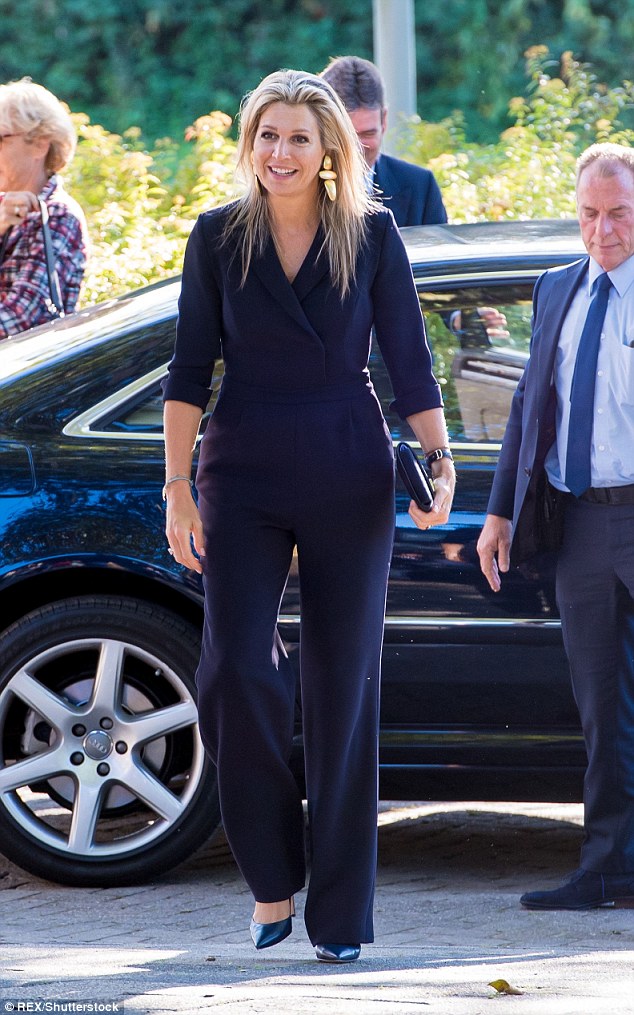 Stylish: The Dutch Queen arrived in a tailored navy blue jumpsuit and matching shoes carrying a small clutch purse as she walked into the venue

The mother-of-three had arrived in a smart tailored navy blue jumpsuit with matching stilettos, and didn’t seem at all prepared for a stint on a basketball court.

She wore her blonde hair straight and accessorised with a pair of chunky pebble-shaped drop earrings.

The Argentine-born royal chatted with the founder of YETS Foundation, Peter Ottens.

Maxima was more than happy to carry her shoes as she wandered round the court watching the youngsters take part, speaking to several along the way.

At one point it looked as if the Queen was preparing to throw a few hoops herself, as she limbered up lifting up one leg and appearing to grab on to her foot. 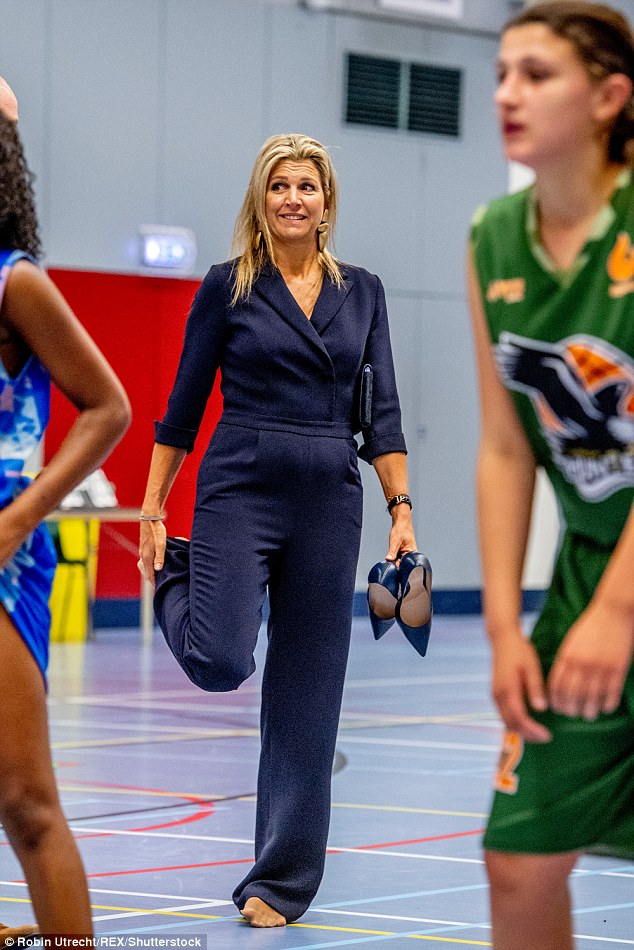 Taking part: The Queen looked as though she was preparing herself to take part in the match as she limbered up on the court, lifting her leg up and grabbing her foot 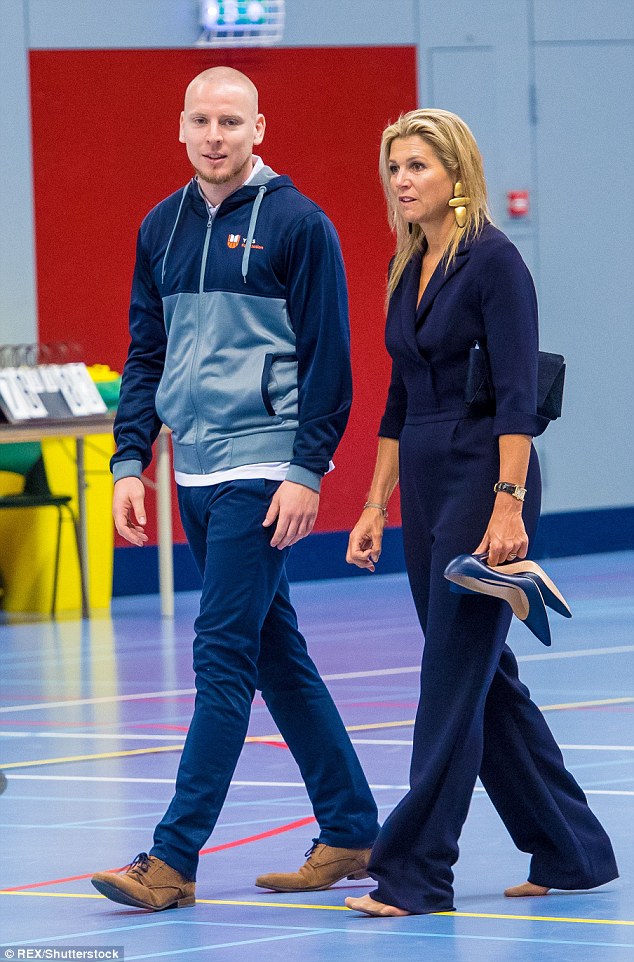 Walkabout: The Argentine-born queen consort was happy to carry her shoes as she discussed the foundation with the founder Peter Ottens who started the cause to help vulnerable youths 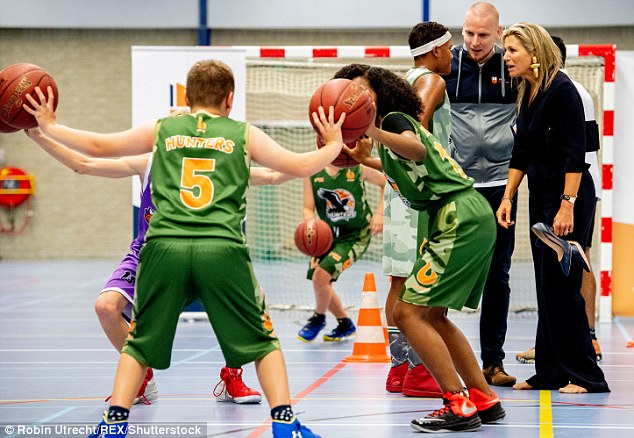 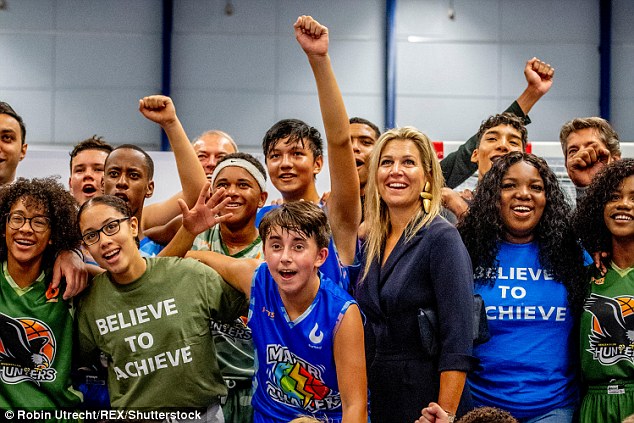 Say cheese: At the end of the visit to the foundation Maxima joined in on a group photo with the members of YETS smiling away as some of them raised their fists in triumph 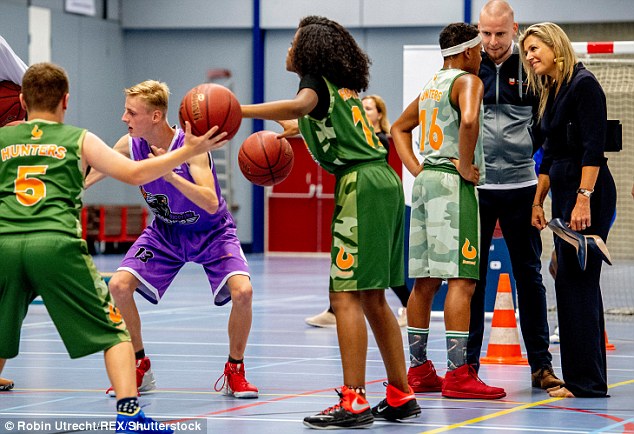 Action: Founder Peter has explained on his website that he decided to launch the group to give something back to his country and help vulnerable youths with sport 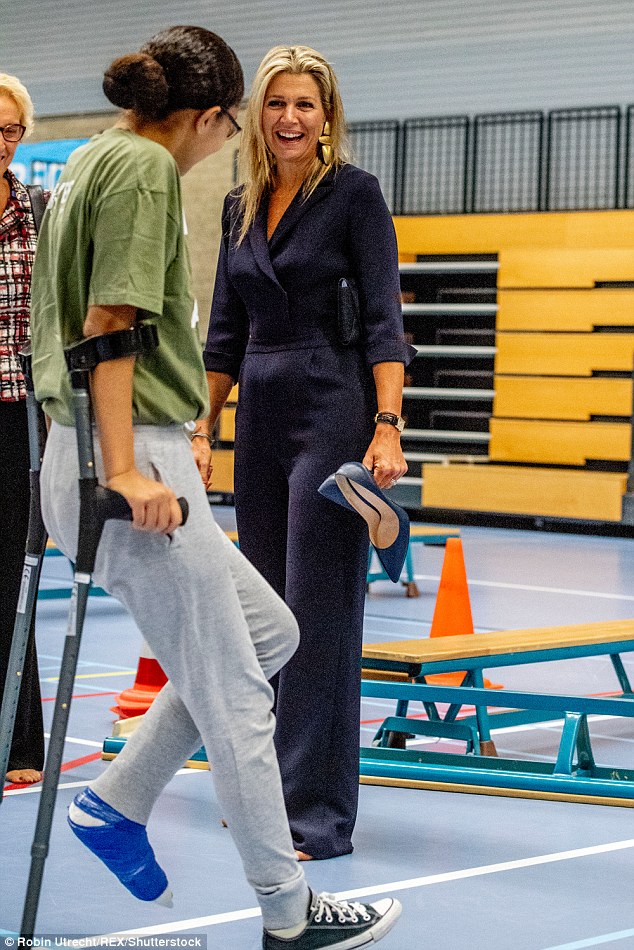 Out of action: One youngster didn’t let their broken foot stop them from taking part in the royal visit as they hobbled on the court much to Queen Maxima’s amusement 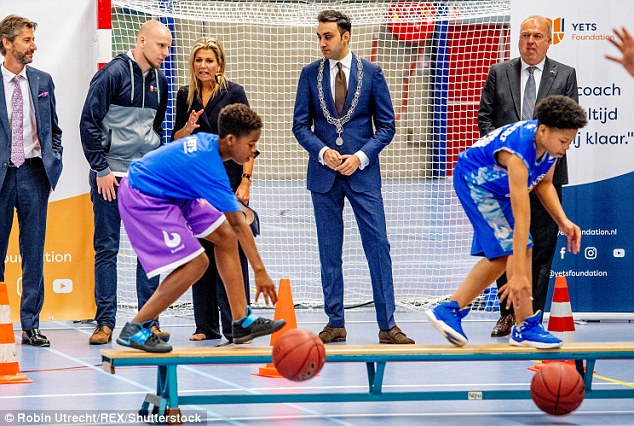 Founder of YETS and former basketball player Peter Ottens explained on his website that he came up with the idea of using basketball to help vulnerable youths to give something back to his country.

When he set the business up they gave workshops at home and abroad, including at schools and in youth detention.

They believed that sport already served as a means to help others get the best out of themselves, but Peter saw that the workshops were too one-off to make the difference.

‘Vulnerable youths only succeed when they are surrounded by adults who believe in them and are ready for them for a long time and unconditionally,’ it says on the YETS website.

He decided to bring the American ‘junior college model’, as he had experienced it himself, to the Netherlands.

This involved two years of basketball, encouraging youths to become socially active and ‘build a family’ as well as developing as a person and a basketball player. 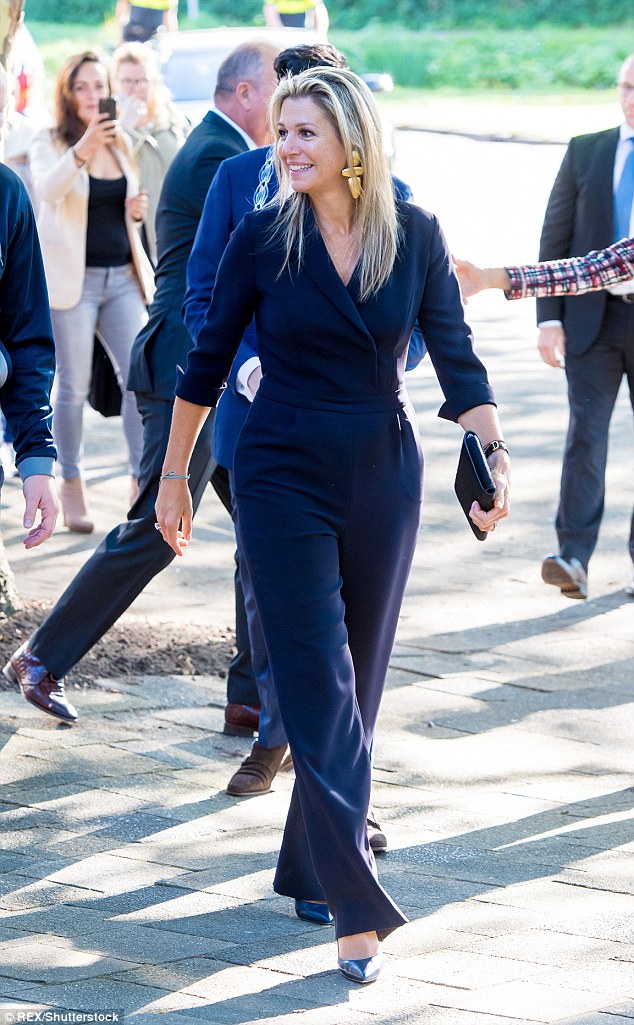 Matching: Maxima looked chic in a jumpsuit which she matched her heels and bag to, teaming simple accessories and a statement pair of pebble-shaped earrings 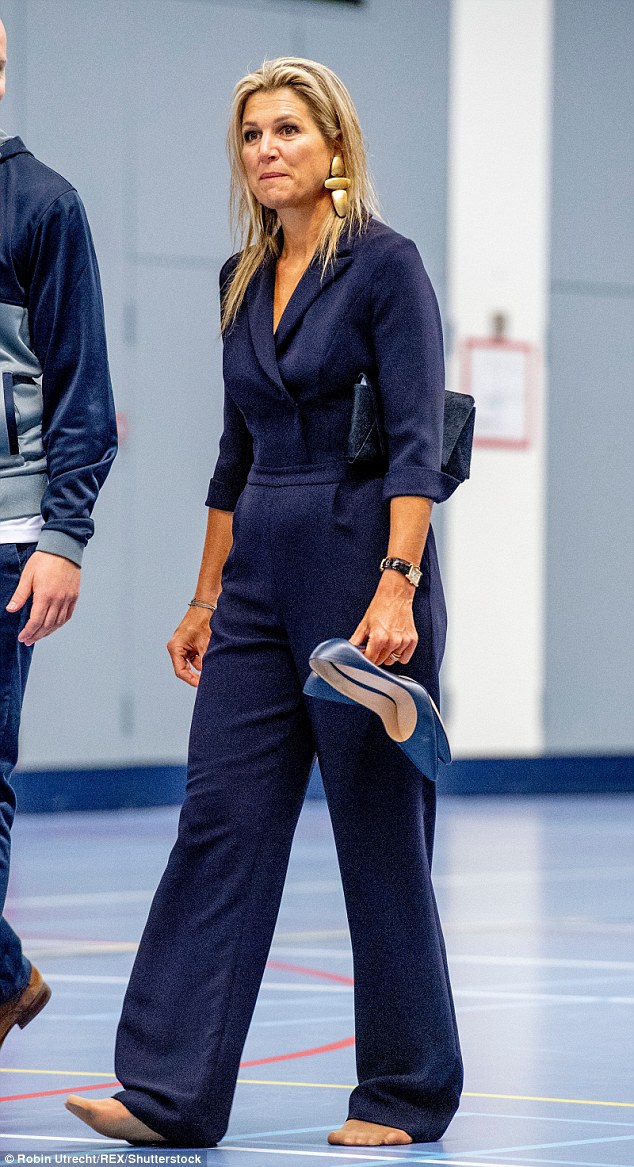 In the navy: Known for her love of colour Maxima opted for the muted tone, but her shoe choice wasn’t quite right for the sporty visit

Maxima has endured a difficult few months, recently flying to Buenos Aires for the funeral of her younger sister, Inés Zorreguieta.

Inés took her own life at the age of 33 following a lengthy battle with depression.

Máxima pulled out of several state visits in the wake of Inés death in June, bravely returning to work two weeks later.

Later that month, during a visit to a hospital in Groningen, she appeared to fight back tears as she gave a short speech.