QUENTIN LETTS: Cue the Hitchcock music… so much around May is tense and murderous during these Brexit negotiations

At the end of a two-hour interrogation session in the Commons, Theresa May scrabbled at her feet.

Colleagues wondered what she had lost. ‘I had my handbag down here somewhere,’ she said.

The Prime Minister’s handbag had gone walkabout! Happily, it was located. But will she ever use it to biff Barnier? 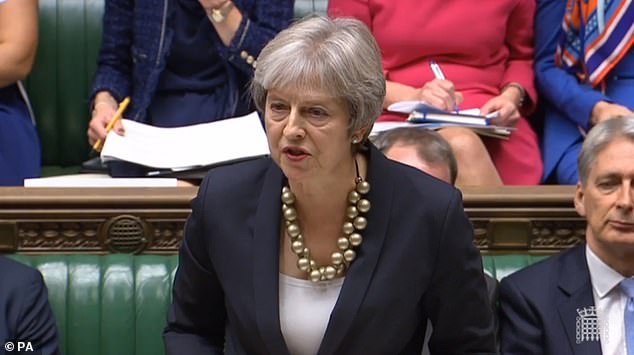 Theresa May (above) came to the Commons on Monday to make a Statement, nominally about the recent EU summit. She uses these set-pieces to remind the House that she is Still Walking and to give little tilts of one or other wing

When Mrs May arrives at a scene these days, you sense the jagged strings of the Bernard Herrmann music used by Hitchcock in Psycho. So much that surrounds her is tense and murderous.

Many of the MPs who spoke yesterday took it upon themselves to attack, virtuously, the garish language used by an anonymous Tory MP about Mrs May at the weekend. It’s nothing compared to what you hear said about the political elite by the voters, dearie.

Like many an expendable soul in horror films, Mrs May just goes about her daily routine, polishing her teacups, applying her lipstick, stepping into the road.

The viewer may be aghast at the thought of impending violence but it is hard not to keep watching. A black-and-white close-up of her jabbering lips, her porcelain neck, so slender and easily encased by fingers: shriek, shriek, shriek go Herrmann’s violins. 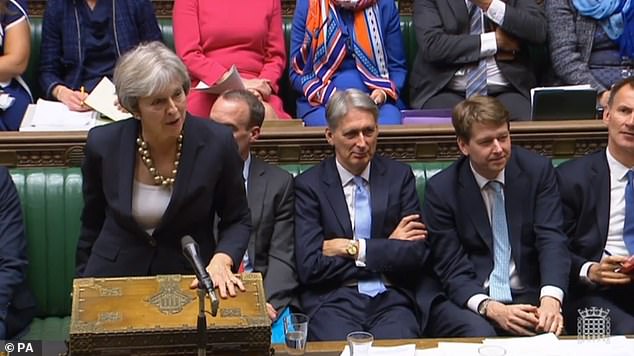 Many of the MPs who spoke yesterday took it upon themselves to attack, virtuously, the garish language used by an anonymous MP

She came to the Commons to make a Statement, nominally about the recent EU summit. She uses these set-pieces to remind the House that she is Still Walking and to give little tilts of one or other wing.

If she favoured a side yesterday it was the Eurosceptics, to a very small extent. She used some of their recent language about how she did not want Britain to be caught in the ‘limbo’ of a never-ending transition period.

Philip Hammond, Chancellor, arrived just after her and stood directly behind her by the Speaker’s Chair while the previous item of business neared its end. Mr Hammond allowed her to walk alone to her place on the front bench.

Perhaps he thought she deserved the hear-hears on her own. Not that there were many. She took her seat to a daunting lack of interest.

She was flanked by Brexit Secretary Dominic Raab and the Cabinet Office’s David Lidington, the latter being prey to a tic in his left cheek. The Chief Whip was on parade and he looked sunnier, whispering with exaggerated secrecy to a sidekick, Pincher. Good name for a Whip.

With the House near full, this wanted to be an important occasion. Nothing she or anyone else said justified that bubble of expectation.

Her prepared remarks were sufficiently uninteresting for hardcore Remainer Dominic Grieve (Con, Beaconsfield) to slip out after a few minutes. Grieve wears a strange, glassy smile these days. He and Soubry & Co openly cackle and make the Brexiteers look statesmanlike. 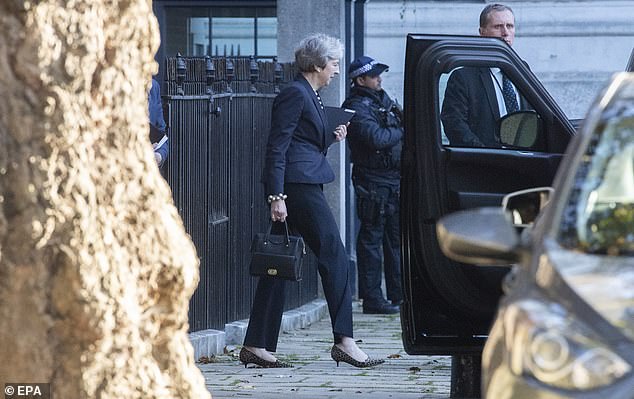 Mrs May, seen above leaving through the back of Downing Street, yesterday claimed that she was unkeen on any extension of the process. ‘I do not want to extend the implementation period. I see any extension as undesirable’

It is something they admire intellectually, even if the rest of us find it hard to believe.

The extension of that transition period was the stickiest problem for Mrs May yesterday. Peter Bone (Con, Wellingborough) quoted a constituent who asked simply: ‘How can we drag a bad deal on for a year, just so it is watered down even more?’ Remainers seemed equally cold on any extension.

One of them, Phillip Lee (Con, Bracknell) earlier admitted that a Norway-style fudge on Brexit would not be what the referendum voters sought.

Mrs May yesterday claimed that she was unkeen on any extension of the process. ‘I do not want to extend the implementation period. I see any extension as undesirable.’ Er, so who first suggested it? It would only be needed, she said, if the negotiating process was ‘not quite ready’.

Not quite ready? Made it sound like a baked egg. I put mine back in the Aga and in seconds the gooey centre has gone intolerably hard. V tricky.