QUENTIN LETTS: Sweet-talking Don had the husky drawl of a lounge bar seducer as he gripped Theresa May with his electrifying bluster

Few geo-political news events happen in the open countryside, to the mooing of cows, the brzzzzt of horseflies and the nearby swaying of blue-headed catmint.

Chequers, Buckinghamshire, built in the reign of Elizabeth I, is a bucolic spot but yesterday its rural bower had six whacking great American helicopters in its parkland, a small army of security guys and a whirlybird US president in the walled garden.

‘Last night,’ drawled Donald J. Trump, with the husky tone of lounge-bar seducers down the ages, ‘I got to know the Prime Minister better.’ A phrase open to misinterpretation! Cough, I BEG your pardon, sir? 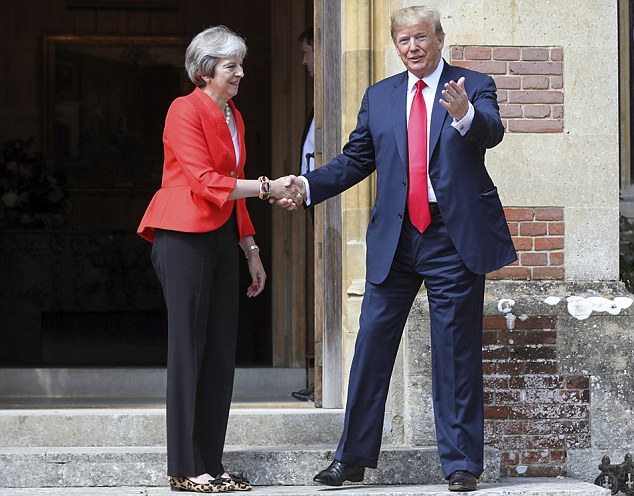 Mr Trump continued that he had been ’embarrassed for the rest of the table’ when they dined at Blenheim Palace on Thursday evening. Theresa was ‘an incredible woman’, he gasped.

Mind you, he did also call her ‘a people person’. That’s a first.

His sweet-talking of the current chatelaine of Chequers – the house from which Churchill telephoned President Eisenhower after Pearl Harbor – was all meant innocently.

He and Mrs May had been so gripped by their Thursday-night conversation about global events and policy priorities that they had not had time for small-talk with the rest of the throng, claimed Mr Trump.

Between Thursday sunset and yesterday just after lunch, when President and Prime Minister came hand-in-hand down the red-brick steps towards their garden lecterns, something awkward had happened.

Mrs May’s gushing admirer, Donald, had vouchsafed an interview to The Sun newspaper in which he said her proposed Brexit cave-in to Brussels was a stinker likely to prevent an Anglo-American trade deal. Oh dear. That was the opposite of what the Europhiles at 10 Downing Street had been claiming. 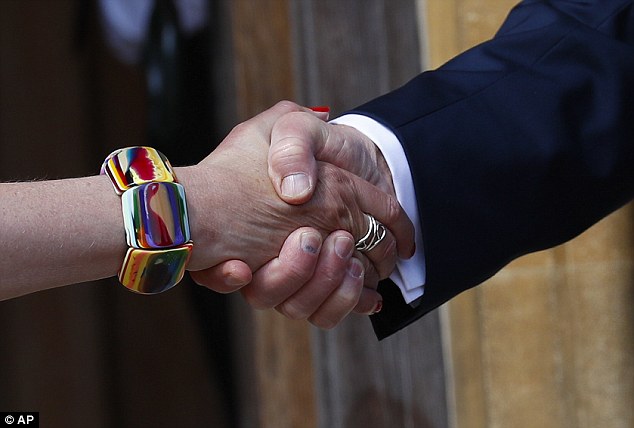 The President gives one of his infamous white-knuckle handshakes

The President also told The Sun that he thought Mrs May’s pesky former foreign secretary, Boris Johnson, would make a terrific prime minister. Doubly awkward. When he yesterday repeated that view, declaring Boris to be a friend and a great guy, Mrs May’s face stiffened as though injected with starch. An ostrich sensing the nibble of weevils at its hind quarters.

But the event could have gone a great deal worse for her. By her standards she was reasonably succinct and unwarbly and he coated her with layer after layer of compliment.

Mr Trump disclosed that the first thing he had done yesterday morning, when he saw Mrs May, was apologise to her for that interview.

She had allegedly brushed aside the matter, telling him it was only to be expected if you talked to those dreadful newspaper types. Oldest trick in the book. You let rip a silent but deadly and you immediately kick the dog. 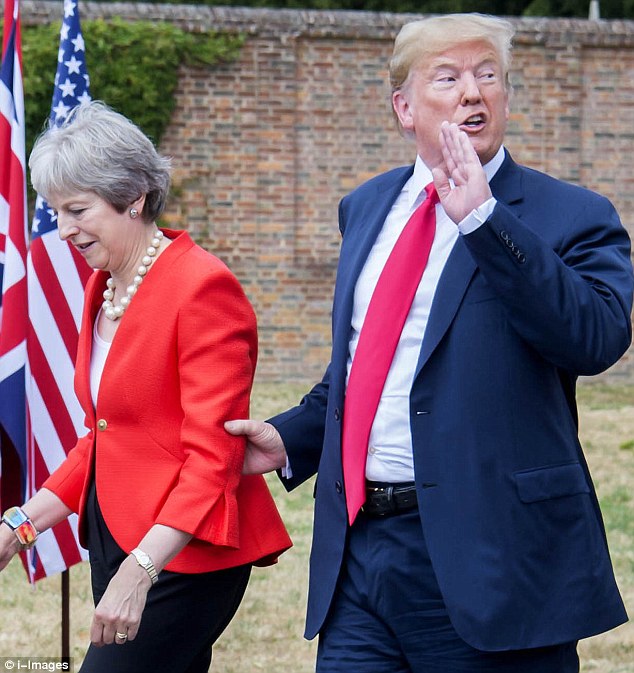 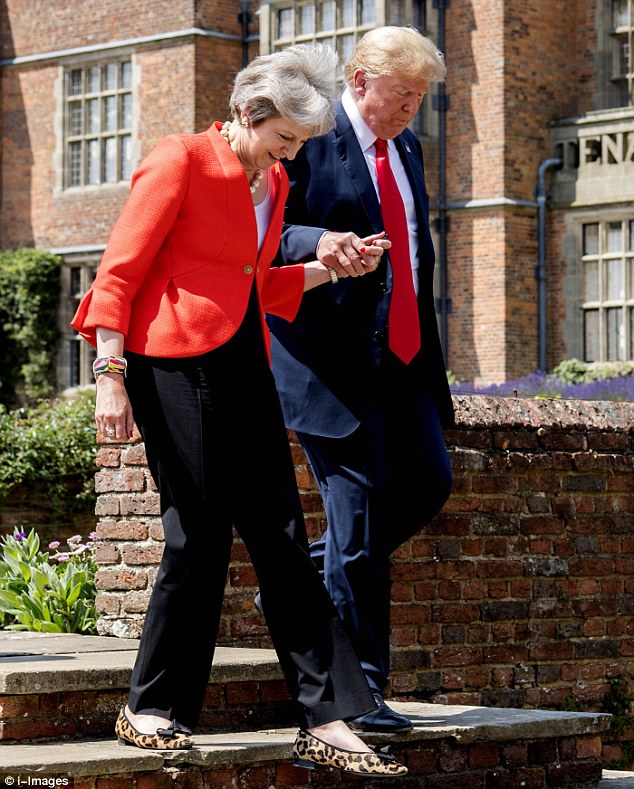 …before she helps him down the steps

Mr Trump tried claiming that The Sun had misreported him – ‘fake news’ he blustered – but it was reasonably clear that was not the case.

From what one can glean, it was perfectly legitimate news but it so happened that it had broken that beautiful little cherry of a courtship he and Theresa had been stroking the previous night under the Blenheim moon.

Mr Trump’s contrition yesterday was diplomatic. He smeared it on, thick as Branston Pickle near the end of your Ploughman’s Lunch. But this recalibration of his position was, itself, less than the full story.

He plainly still thought Mrs May’s Brexit plans were pathetically weak. With rare self-restraint he may not have quite put it like that yesterday but his interview had done the work.

Yesterday he simply claimed, with a shrug, that he did not know what was happening with Brexit (join the club, mate). ‘Perhaps’ the UK would be leaving the EU – he practically threw up his hands with despair at this point – but ‘whatever you do is okay with me’.

He surely had a point. If Mrs May would only remould her dreadful White Paper to remove those restrictions, and make a couple more shimmies towards the hard-Brexit side, it would do her some good with her backbench MPs and, maybe, with her disenchanted party membership.

Mr Trump held out the prospect of US-UK trade being ‘double, triple, quadruple’ its current levels if we got out of the EU properly. Are we really prepared to squander such prospects just because Dominic Grieve and Anna Soubry are being difficult?

Recalling Barack Obama’s ‘get to the back of the queue’ threat to Britain in 2016, Mr Trump said: ‘I thought that was a terrible thing to say.’ Unlike Mr Obama, he said ‘line’ and not ‘queue’.

Though he was reluctant to criticise the EU on our behalf, he was jauntily happy to do so himself. ‘The European Union has systematically taken advantage of the US,’ he said. ‘It’s a disgrace. They treat the US horribly. If it doesn’t change, they’re going to have to pay a very big price.’ During questions he was asked how he would handle negotiations with Michel Barnier and Co. Mrs May started wobbling her head.

This is her customary reaction when she senses impending disaster. The head moves ever so slightly from side to side, like a slowing plate on a circus trickster’s stick.

Mr Trump replied that he had offered Mrs May a ‘suggestion’ on how to approach her negotiations with the European Union but she had not taken it. ‘I think maybe she found it too brutal.’

We were not told what the suggestion was. Whack the Europeans with pre-emptive trade tariffs? Ban imports of Champagne? Expel all European Commission diplomats and force the French to take in Lord Adonis and A.C. Grayling as refugees? Who knows?

But I bet it would have secured a better position than her useless munchkins Olly Robbins and Gavin Barwell have so far managed.

Is he a braggart? Of course. He kept saying how great he was, what a great job he was doing, praising himself almost more than he praised his ‘incredible’ hostess.

Does he bluster? You bet. Is he a bully? His treatment of a poor reporter from CNN. ‘Fake news!’ he said languidly, refusing to take the man’s question.

But it is the bluster of a real estate deal-maker, of a man who, as he tours the world, stirs up as much dust as his helicopter’s blades. It is vulgar but it is also, after decades of political blandness, undeniably electrifying.

As Marine One’s engines whined and its rotors turned and the big bird rose from Chequers’ sun-bleached grass, it was hard not to feel a certain sense of loss.