RACHEL JOHNSON: Trump is no match for this 92-year-old lady with a handbag

I admit, I was beginning to think that Donald Trump was running away with it. On his first night here he insulted his hostess Theresa May behind her back and implied my brother Boris would make a better Prime Minister than her in a newspaper interview.

He trashed her art of the deal and then lied, calling accurate reports of this rank discourtesy ‘fake news’, only to reverse into ‘fake schmooze’ mode: Mrs May was incredible and our relationship was the ‘highest level of special’.

And the optics were awful too. He came over here as if invading a once imperial nation and we were a mere colony on our uppers in need of a big break from him. 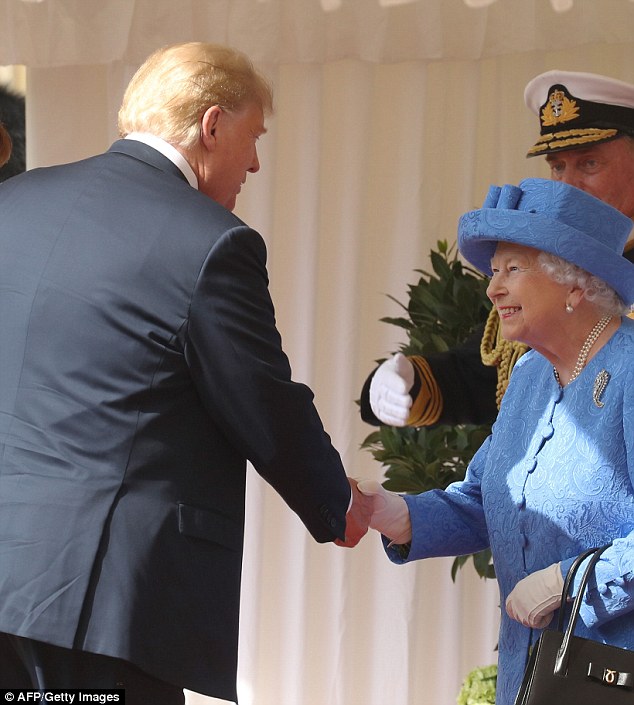 He did not arrive so much as descend from the skies à la Apocalypse Now, with his monogrammed helicopters, his motorcade, his 160-strong security detail, his £1.5 million armour-plated limo called The Beast. He blitzed us with the high-tech, pointless panoply of American power, and he pulverised us with his monster ego.

He had a whale of a time strutting and turkey-cocking and grandstanding as we rolled out the red carpet in palaces and stately homes across three counties.

It was three long days of hurt. The great disruptor even managed to swerve the blimp in Parliament Square and the many tens of thousands who marched in protest and condemned him as a bigoted racist sexist, a great big frowning orange baby. Then the tables turned. She stood patiently on a sort of dais underneath a garden gazebo of the type you see at country shows, selling carved antlers or sensible padded jackets. He was due at 5pm but she was good and early. She stood there in the heat in her coat for ten long minutes, chatting, waiting.

Marine One landed at Windsor Castle and he strolled out with his fabulous First Lady, and this is what we saw. A 92-year-old woman of 5ft 4in managed to make the 6ft-plus President of the United States look like a spoilt little boy.

For this was the one he’d been waiting for. This was the one meeting he could say to Melania in bed later ‘I wish my mother was alive to have seen me today’ – even if the Grand Corridor of the castle looked like a dusty antiques arcade in the Cotswolds.

He wasn’t bothered about the Blenheim dinner for business leaders. He can – and does – play golf any day of the week. He wasn’t that thrilled about sitting in Churchill’s leather chair, even. He could take them or leave them.

These were the tea-for-three images he wanted his people back home to see. Donald Trump, Melania Trump, on a par with the Queen – final proof positive that he had arrived. And in my eyes he more than met his match.

He brought his Beast but we have tall men in ‘fur hats’ (as the US networks called our guardsmen). We do pomp and ceremonial like no other country. We have polite leaders, we broadly welcome immigrants. Mr Trump is merely the 12th President the Queen has welcomed.

We don’t need his expeditionary force of an entourage, his hot air about a hard Brexit, because we have all the soft power of an old lady with a handbag.

What he really wanted to do on his visit was have a cup of tea with the Queen in Windsor Castle. And think how his mother would have been proud of him, even though Melania failed to curtsey, and he walked at one stage in front of her Her Majesty, who somehow managed to bring the unruly, unreliable, unpredictable Trump to heel as if she were house-training a terrier puppy.

Maybe now he’s been here and done that, it might all stop and he will go away for ever, please. He came. We saw. But she conquered.

The beautiful game can do without the eye candy

Cameramem at the footie have at last had the memo. The ‘diversity’ chief at FIFA has warned them not to linger on pretty females during breaks in play. I won’t miss these ‘honey shots’, which have been conspicuous this World Cup (and Wimbledon). Indeed, during the last moments of the Sweden game, the screen filled with such a succession of desolate yellow-and-blue-shirted blonde beauties that I began to think all Swedish football fans were supermodels. It’s been a gala summer of sport. Women are more than screen-filler, folks. It’s #timesup for the eye-candy-cam. We should be shouting GOAL not GIRRRRL. 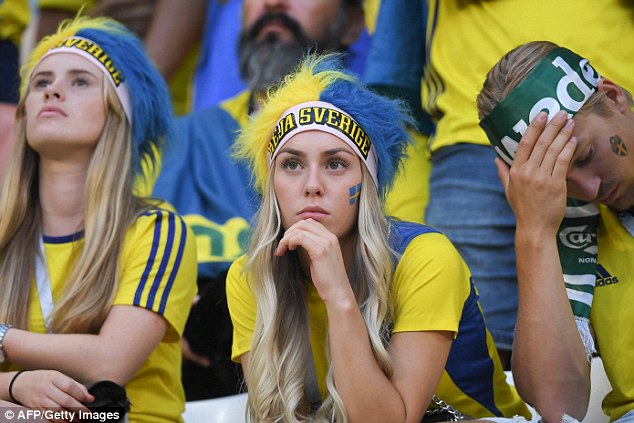