Rafi Eitan, the canny Israeli spymaster who commanded the Nazi-hunting team that captured Adolf Eichmann in Argentina and many years later was unmasked as the handler of Jonathan Jay Pollard, the American Navy intelligence analyst who pleaded guilty to passing on more than 1,000 secret documents to the Israelis, died on Saturday in Tel Aviv. He was 92.

The death was confirmed by the Ichilov Medical Center, where Mr. Eitan had been hospitalized, Israeli news organizations said. In a statement, Prime Minister Benjamin Netanyahu called Mr. Eitan “among the heroes of the intelligence services of the State of Israel.”

Mr. Eitan, a bespectacled man with thinning hair, was a legend in his country because so many feats of espionage and international intrigue seemed to bear his fingerprints. He exploited loopholes in national security to achieve masterful strokes of espionage, counterterrorism or simple revenge.

He played important roles in the surgical strike on Iraq’s Osirak nuclear reactor in 1981, the theft in the late 1960s of at least 100 pounds of highly enriched uranium from a nuclear fuel plant in the Pittsburgh area that helped Israel’s atomic bomb program, and the assassinations of the Palestinian commandos who carried out the massacre of Israeli athletes at the Munich Olympics in 1972.

“In principle, when there is a war on terror you conduct it without principles,” he said in an interview with the Israeli newspaper Ha’aretz in 2010. “You simply fight it.”

No single deed garnered as much attention as the kidnapping of Eichmann, the SS official who drew up plans for the Final Solution, the mass deportation of Jews to camps for extermination.

Mossad, the Israeli counterpart of the Central Intelligence Agency, had learned from a German prosecutor that a young German woman in Buenos Aires had befriended a young man there named Nicolas Eichmann, who lived with his family in a suburb of the city. His father, it was determined, was using the alias Ricardo Klement.

“I grabbed him by the neck with such force that I could see his eyes bulge,” Mr. Eitan recalled. “A little tighter and I would have choked him to death.”

They drove three miles to a safe house, where Eichmann was kept for seven days, during which he admitted that he was indeed Adolf Eichmann.

“We did not want to show Eichmann how nervous we all were,” Mr. Eitan told an interviewer. “That would have given him hope, and hope makes a desperate person dangerous. I needed him to be as helpless as my own people were when we he had sent them in trainloads to the death camps.”

The team dressed Eichmann in the outfit of an El Al airline crew member, forced him to drink a bottle of whiskey to make him wobbly, and escorted him onto a departing airplane as if he were an under-the-weather steward. An actual El Al crew member remained behind in Buenos Aires so that there would be no discrepancy in the manifest. The team was also aware of the Argentine whereabouts of the demonic Nazi medical experimenter Josef Mengele, but Mr. Eitan had blocked any attempt to seize him because it could have jeopardized the capture of Eichmann.

The kidnapping was condemned in Argentina as a violation of that country’s sovereignty and of international law, but it was met with deep satisfaction and vindication by tens of thousands of Holocaust survivors. Eichmann faced a trial in Jerusalem that drew renewed attention to Germany’s systematic genocide. He was found guilty of crimes against humanity and was executed by hanging in 1962. 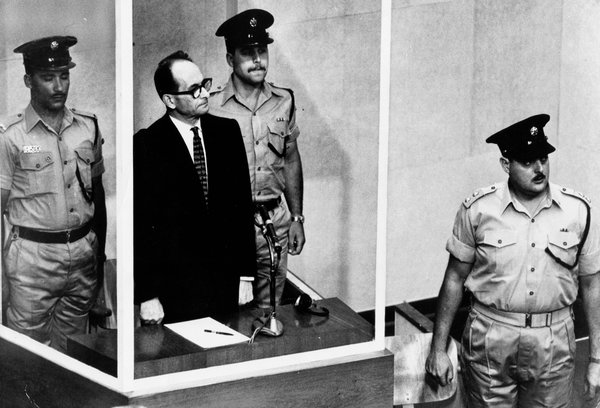 In his book “Gideon’s Spies: The Secret History of the Mossad” (1995), the British author and investigative journalist Gordon Thomas wrote that Mr. Eitan spoke to Eichmann in the execution chamber.

“Eichmann looked at me and said, ‘Your time will come to follow me, Jew,’ ” Mr. Thomas quoted Mr. Eitan as recalling, “and I replied, ‘But not today, Adolf, not today.’ ”

Rafael Eitan was born on Nov. 23, 1926, in the British Mandate of Palestine to Zionists who had immigrated from Russia three years earlier and lived in a small settlement near Tel Aviv. Not yet a teenager, Rafi joined the Haganah, the forerunner of the Israeli army, to defend the settlement against Arab attacks and was later recruited into its more elite branch, the Palmach.

With Jews pressing the British for an autonomous homeland, his most dazzling venture was to crawl through sewers to blow up a British radar installation on Mount Carmel. It earned him the sobriquet “Rafi the Smelly,” to distinguish him from another Rafael Eitan, who went on to become chief of staff of the Israel Defense Forces. Mr. Eitan also played an important role in smuggling Jewish refugees from Nazism into Palestine.

Mr. Eitan was twice wounded in the 1948 war for independence. After telling his superiors that it was difficult for him to run in the field, they assigned him to an intelligence unit. His spying career had begun, though he took time to earn a degree from the London School of Economics.

Over the next few decades he served as operations chief at Shin Bet, Israel’s equivalent of the Federal Bureau of Investigation, and as Mossad’s deputy operations chief. In 1965, posing as an Israeli government chemist, he visited a nuclear fuel plant in Apollo, Pa., outside Pittsburgh. It was later discovered that a large quantity of enriched uranium had vanished. Some American analysts concluded that it was more than a coincidence that Mr. Eitan’s visit had occurred around the time of the theft.

In 1985, Mr. Pollard, an intelligence analyst for the Navy assigned to monitor classified materials on global terrorist activities, was arrested on charges of spying for Israel and turning over thousands of documents to it. He confessed and was sentenced to life imprisonment. After serving 30 years, Mr. Pollard, now 64, was granted parole and released from prison in 2015.

The Pollard affair strained the close ties between the United States and Israel and raised the specter of divided loyalties among some American Jews, though today, after revelations in 2013 of the United States spying on allies through the National Security Agency, the double-dealing seems routine.

Israeli officials at first tried to depict the Pollard case as a rogue operation by Mossad. But Shimon Peres, Israel’s prime minister at the time, publicly apologized and allowed State Department officials to question Mr. Eitan, who had been the adviser on terrorism to a previous prime minister, Menachem Begin, and had overseen Mr. Pollard’s spying. Mr. Eitan later told journalists that he had acted with “permission and authority.”

According to Mr. Thomas, the British author, Mr. Eitan was also for a time a secret adviser on counterterrorism to MI6, the British foreign intelligence agency, and had helped Mossad agents track an Irish Republican Army bomb squad in Gibraltar that was then killed by British special forces.

In the wake of the Pollard affair, Mr. Eitan lost his executive intelligence post but was made head of the state-owned Israel Chemicals, a job that ended in 1993 when he was 67.

He and his wife, Miriam, were said to have had three children and several grandchildren, but there was no immediate information on his survivors.

Mr. Eitan was played by the actor Nick Kroll in “Operation Finale,” a 2018 movie about the operation to capture Eichmann.

In supposed retirement, Mr. Eitan undertook large agricultural and construction projects in Cuba and, like other Israeli spymasters, fashioned something of a political career. He represented the Gil Pensioners Party in the 2006 elections for the Knesset, Israel’s parliament. It won seven seats, and he briefly served as minister for pensioners. But Mr. Eitan lost his seat in 2009.

His one other avocation was sculpture, and Mr. Eitan produced more than 100 pieces over more than 30 years. None, however, have been as savored for their cleverness as his espionage operations.