The Beauty Queen of Leenane

We’re looking at the outside of a stone cottage on a hill in Galway, and you can almost smell the peat smoke, the leaf mould and the promise of green hills. But we’re not here to enjoy the scenery. We’re going inside, into the teeming, claustrophobic interior of two women’s minds.

Renee Mulder’s magnificent interior sets up the drama like a classical prologue: resolutely grim, almost charming in its fetid detail. It’s the home of seventy-something Mag Folan (Noni Hazlehurst) and her daughter, the forty-something Maureen Folan (Yael Stone), who cares for her. Care is a technical term, not an emotional one. Mag sits in her armchair, issuing plaintive demands. Maureen makes the porridge, turns on the radio, fetches the biscuits. Bleak doesn’t begin to describe the two women’s existence.

When the outside busts its way in, in the shape of two brothers, Ray and Pato Dooley, (Shiv Palekar and Hamish Michael) Maureen greets the invasion with manic relief, Mag with dour suspicion. Love, romance, maybe even sex, could be an escape route for Maureen. And a threat for Mag. 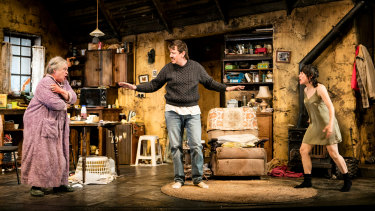 The Beauty Queen of Leenane is an intimate drama that begins as sharply observed domestic comedy. Towards the end of the first act, however, something shifts. There are secrets and vulnerabilities. Things are not as they seem. Who is controlling whom? A sliver of doubt creeps in, and with it an ominous sense of approaching tragedy.

Paige Rattray directs the spectacular cast with an eye for detail that makes every move, every fleeting glance tell. Palekar is a twitchy, volatile Ray, andMichael plays the redemptive Pato Dooley with a vulnerability and honesty that glows. Hazlehurst is a glorious Mag, shifting from repellent to pathetic to heroic in the blink of an eye. Meanwhile, Stone gives a dazzling performance as the febrile Maureen, simultaneously vulnerable and vicious, like a trapped animal desperate to escape.

Throughout this brutish tale, Martin McDonagh’s writing offers a lyricism and grace that transcends Mag and Maureen’s ugly relationship, co-opting them in an almost musical back and forth that underlines their enduring and co-dependent nature. A nature that mirrors the toxic colonial relationship between England and Ireland with poignant insight.

The Beauty Queen of Leenane runs in Sydney until December 21.