Reflections: The trials and tribulations of a sleepy camper

There are two kinds of human: morning people and the rest of us. Morning people whistle at the marshmallow mauves of dawn, the rest of us sigh through sore eyes and curse whatever disaster – small child, offensively early flight, earthquake – has befallen us. 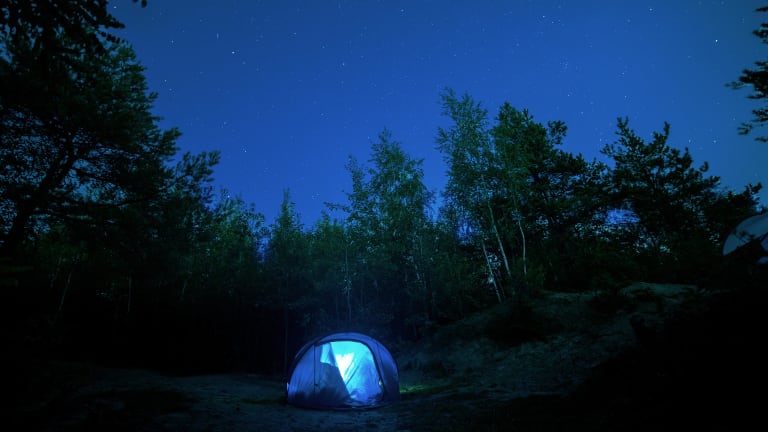 Of course, all pre-teen kids are
morning people.

It struck me recently, after another predictably painful couple of nights "under canvas", that those who like camping and those who are sensible, hotel frequenting people are divided along similar lines. If you're a lover of early mornings and that feeling of having caught the worm, camping is for you, because no one spending the night in the supposedly peaceful Aussie bush gets to sleep in. Ever.

It turns out it's not only annoying humans who whistle happily – or even break into unseemly song – at first light. Birds are dawn embracers, too, and dear goodness there are a lot of them out there.

You might think birdsong sweet, and perhaps it is, dulled slightly by a good wedge of concrete and glass between you and said birds. But when there's a lot of it going on at once it's about as snooze-friendly as a lawnmower competing with a blender.

And some of these birds have clearly been designed by a cruel and morning-loving God, because they don't make any of the calls you've heard in parks. They have specific "wake up, slothful human" songs. If the rapper Eminem wrote bird lyrics, this is what they would sound like.

I swear a bird outside my tent was screeching "truckwit" or something close to it, nonstop for an hour, while another sounded like a pelican belching. To be fair, you won't really be asleep when the birds arrive to wake you, but they will do a good job of ruining any vain attempt to lie in. What will have kept you fitfully unrested all night is the fact that your tent will be, without fail, filled with sand and either too hot to breathe in or bone-achingly cold. And the fact that sleeping bags are only enjoyable if you've always longed to know what life is like for sausage mince. If these cussed cocoons were a comfortable way to rest, surely we'd all be using them at home, and in that wonderful invention, hotels, every night.

Then there's the bedding beneath the no-sleeping bag, which will further undermine your plans to get even two hours of kip in a row. I seem to recall inflatable mattresses being only mildly uncomfortable, and having a 50-50 chance of going utterly flat on you in the night, but they have been voted out of existence, it seems, by proper campers, on the grounds that they are all masochists.

How else can you explain people who really, dearly love camping, and will tell you that doing it near actual facilities – even just drop toilets and non-potable cold-water taps – is not the real thing? People who, and let's not put too fine a point on it, would rather dig a hole in the ground than use a wondrous invention like an outdoor dunny. Not to mention that they seem to enjoy being too cold, too hot, too wet, smelling awful, and the whole morning thing.

Anyway, these crazed and hoary old nuts seem to have decreed that proper campers should sleep on self-inflating "mats", which self-inflate about as much as a balloon with holes in it, and feel just as comfortable and supportive to lie on.

On our recent, ill-advised camping adventure we borrowed a metric tonne of equipment from some friends who have the wild-eyed look of outdoor adventure lovers. My wife had never been camping in her life and a cruel part of me wanted her to know what it's like. Plus, I do all kinds of stupid stuff to make my two children happy. Of course, all pre-teen kids are morning people.

Our camping-mad friends handed over their equipment with pleading eyes, making their desperation plain by saying they were really hoping we'd fall in love with the outdoors, so they'd have someone else to share their madness with.

Mistakenly, I assumed that people who sleep outside for fun would be kitted out with the most comfortable accoutrements available, but I'd not taken into account the masochism thing. When I unwrapped what I'm sure they'd called "mattresses" I almost wept.

To be fair, we – and I mean mainly the kids here – had a fantastic weekend at a truly unspoilt and magical stretch of white-beached national park, lolled upon by kangaroos and laughed at by dolphins. I'm scared to tell anyone what it's called, or where it is, because I fear someone will surely build a casino on it immediately.

The days were beautiful, the wildlife bountiful and the campfire bonhomie brilliant. Even the food was great, if you don't mind your dinner going cold after the first two mouthfuls.

I'd have to say I love pretty much everything about camping, except the camping itself.