“Respect” tells the story of how Aretha Franklin found her voice. Not just her soulful singing voice that could bring the house down, but the fiery and steadfast voice she became known for. It’s the voice that decided when she would and wouldn’t sing, told others how she wanted them to refer to her and fiercely advocated for Black folks.

Screenwriter Tracey Scott Wilson, who’s also a playwright, television writer and producer, was tasked with outlining and writing a story arc that illustrates how Franklin, who died in 2018 at age 76, found that voice.

The film, which hits theaters Friday, follows the Queen of Soul from ages 10 to 29. Starring Jennifer Hudson, whom Franklin handpicked to portray her in her biopic, “Respect” showcases the marriage of Franklin’s musical genius and spirituality.

What some may not know is how Franklin became the voice of many movements. She and her father, renowned minister C. L. Franklin, worked closely with Martin Luther King Jr. during the civil rights movement. Franklin would often perform for Southern Christian Leadership Conference fundraisers, and she donated millions of her own money to organizations fighting for Black rights. When King was assassinated in 1968, she sang “Precious Lord” at his funeral.

In writing the screenplay, Wilson shared, Franklin’s family and those who worked closely with the singer said there were times she didn’t show up for paid gigs, but she always made time for the movement. Through her music, she was able to give movements for Black lives a soundtrack, Wilson said.

“I just think that ‘Respect,’ and ‘Think,’ and just so many [of her] songs became the anthems for so many movements,” the screenwriter noted. “And even today, that her songs fuel and inspire movements … Think about the gay rights movement, the women’s movement, the Black power movement. So, I think that it touches people universally, around the world.”

Wilson spoke to HuffPost about capturing the Queen of Soul’s activism in the film, working with Franklin’s family to capture her authentic story and how writing this film was the “hardest thing” she’s ever done. 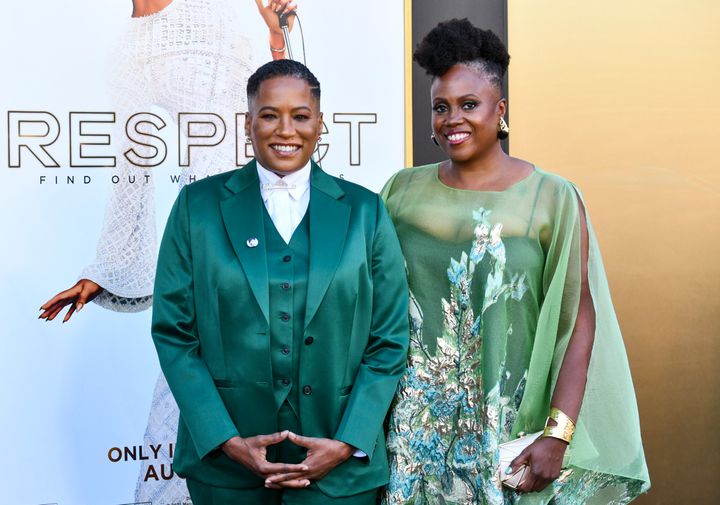 How does it feel for the Aretha Franklin biopic to be your first big screenwriting endeavor?

Aretha’s life was so expansive and there are so many nuggets, so many stories to tell, but what did you really aim to accomplish when sitting down to write the film?

Before I came aboard, it was just answering this question of, “How did one of the greatest voices of all time find her voice?” In order to really tackle it, I had to take the Queen of Soul part out of it, and just look at it as there’s this 10-year-old girl named Aretha whose father is a world-famous minister and who knows all the important Black cultural icons of the day. And then go, “How does that girl grow up in this environment, with this set of circumstances?” And so the idea was to really portray her with complexity and with humanity so that we can understand the icon that she became.

How challenging was that? Because like you said, we know her as the Queen of Soul, so stepping out of that and really diving in and finding that humanity, and getting very granular, how was that process? What were your challenges in accomplishing that?

It was the hardest thing I’ve ever done.

That’s why I think having the support of somebody [director Liesl Tommy] that I’ve known for over 20 years was essential to get through the whole process. Because it’s just a really big responsibility. But also having Jennifer there and knowing that she was chosen by Aretha, that was also really helpful, too, because she knew Aretha so well. So it just helped to know that whatever I wrote, Jennifer was going to make it authentic.

How closely did you work with her family on the project?

Oh, her family was actually really supportive. Sabrina, her niece, and her cousin, Brenda, who was staying with her, they both visited the set several times. They were completely open, just in terms of you could ask them any question that we needed. They were completely open and honest with us, so that was really, really key to us, to have the family supporting us. And we’re just so thrilled that the family really loves the film, too.

That’s amazing. What’s been the biggest or most crucial insight or revelation that you got from the family that really helped propel the film in the direction it needed to go?

Just understanding what Aretha was like when she was younger. Those insights into her as a child and sort of the insights as to what the home life was like.

Community and activism played a huge role in Franklin’s life. Talk to me about incorporating that into the film. Y’all didn’t shy away from showing Aretha not only as the Queen of Soul finding her voice through music, but also through activism in her belief systems. What was that process like? What was the research like? How did you make those decisions to be intentional about how important her activism was to her?

I didn’t know the extent of it when I started working on it. I knew that her father was a respected minister, but I did not know the details about how influential he was and the way he mentored King and so many other leaders of the movement. And it was, just like singing was like breathing to her; so was activism. I mean, to say she grew up with Martin Luther King Jr. talking to her father … just imagine the conversations that she overheard when she was like 5, 6, 7, 8, 9.

How would you, as the screenwriter, describe Aretha’s voice?

What do you hope people walk away knowing about Ms. Franklin after watching “Respect?”

I hope people come away with a deeper appreciation of who she was. When I was doing research on her, I would come across this phrase all the time about her pain and she would be called “a Black genius.” She wasn’t a Black genius. She was just a genius.

She had three other siblings who grew up in the same houses she did, and they had similar experiences and they were exposed to the same amount of people. And they were all exceptional, they were all musically talented, but somehow she was able to rise above. And I don’t know what creates that. I don’t know what, I could not define that for you, but I know it when I see it. And the world knows it when they see it. She was just understanding and claiming that genius, and understanding that genius.