No stealing Kate’s crown! Why Meghan deliberately ‘melted into the background’ at Prince Louis’ christening to allow his proud mother to shine

She’s been the centre of attention since her wedding to Prince Harry in March, especially with the Duchess of Cambridge on maternity leave, but yesterday Meghan Markle made every effort not to steal the limelight at Prince Louis’ christening.

‘Meghan showed off a new and very appropriate and useful body language skill at the christening,’ she explained of the Duchess, who wore an olive green shift dress by Ralph Lauren with matching suede court shoes.

‘That of artfully melting into the background at will to allow other royals to step into the spotlight, despite still being the woman the world’s cameras will be trained on.’

Meanwhile, the Duchess of Cambridge – who wore a McQueen coat dress teamed with a very striking hat by Jane Taylor – was especially animated as she basked in the glow of her son’s special day. 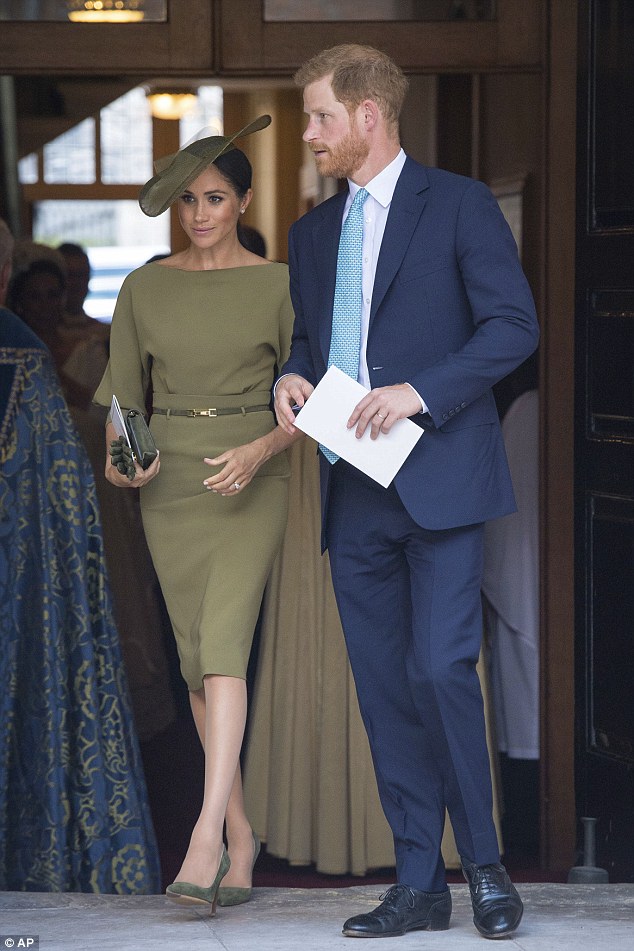 The Duke and Duchess of Sussex restrained from their famous PDAs as they attended Prince Louis’ christening, so as not to steal the limelight 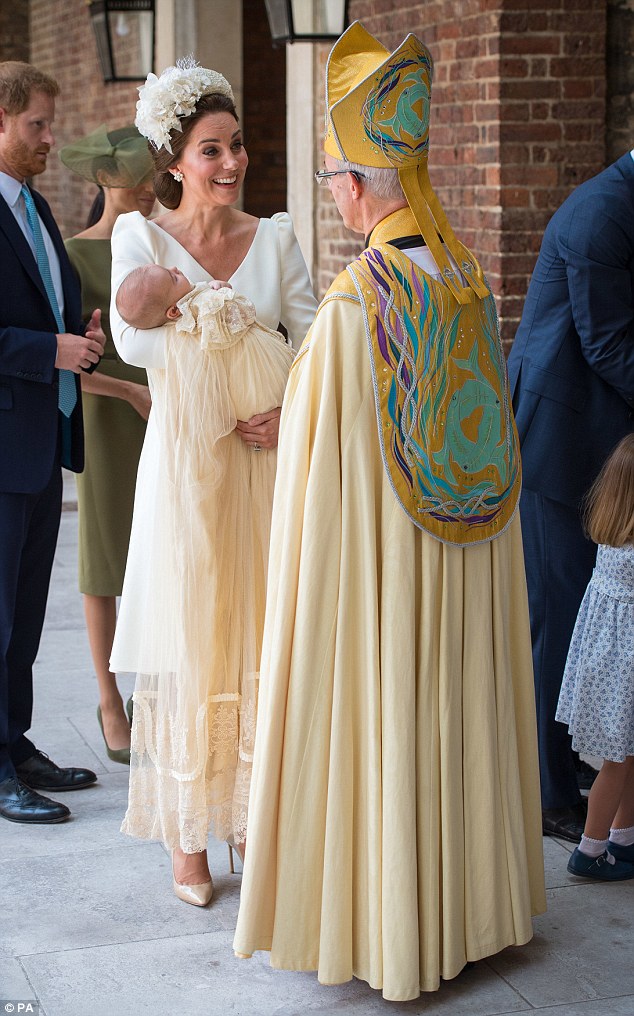 ‘Harry and his new bride hung back behind his sister-in-law, with Meghan sporting a perfect, sociable smile,’ Judi said.

NO PDAs WITH HARRY

While the couple arrived holding hands, there was no further touching or non-verbal communication on show between them.

‘Neither were using the kind of show-stopping body language that they can be known for.’

‘Harry clamped his jacket with one hand and looked serious but both seemed to be at great pains to wait behind the real stars of the day,’ Judi said. 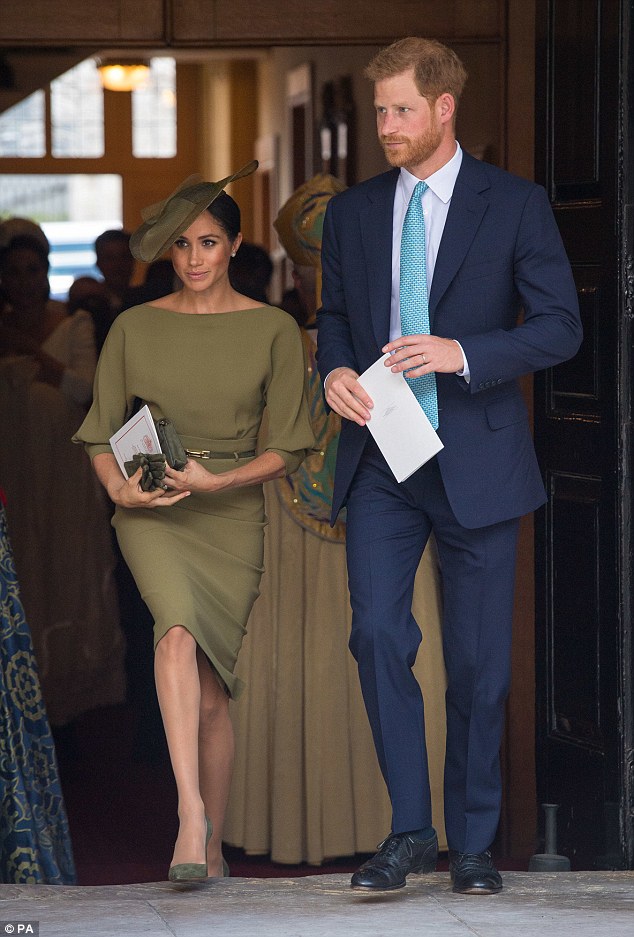 Even Meghan’s choice of outfit spoke of a desire not to draw too much attention.

Her olive green Ralph Lauren dress was perfect for the occasion but the neutral colour and simple design ensured she wasn’t stealing the show.

Kate hasn’t often been spotted in this shade and prefers nude and pale pink when she wears neutrals, so there could’t be any accusations of trying to compete. 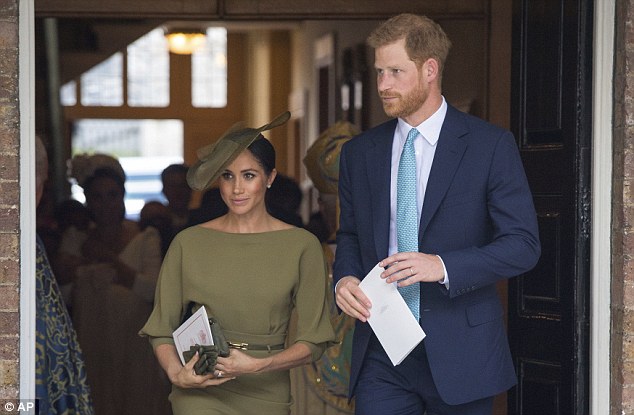 Meghan let a small ‘sociable’ smile play around her lips, but didn’t show too much emotion

By contrast, proud mother Kate was glowing with confidence on her youngest child’s special day.

‘Holding the sleeping baby Louis with a crooked arm and one tender but confident hand under his body she sported a smile that was wide, even by her own impeccable standards,’ Judi said.

‘Kate’s smiles are always pitch-perfect but this one was several notches higher in terms of delight.

‘As she gazed down at her sleeping baby dimples appeared on her cheeks and the muscles in her neck stretched tense from the size of her happy smile.

‘Although keeping her voice down to avoid waking the baby, Kate was the most sociable royal, chatting excitedly to the Archbishop before entering the chapel.’ 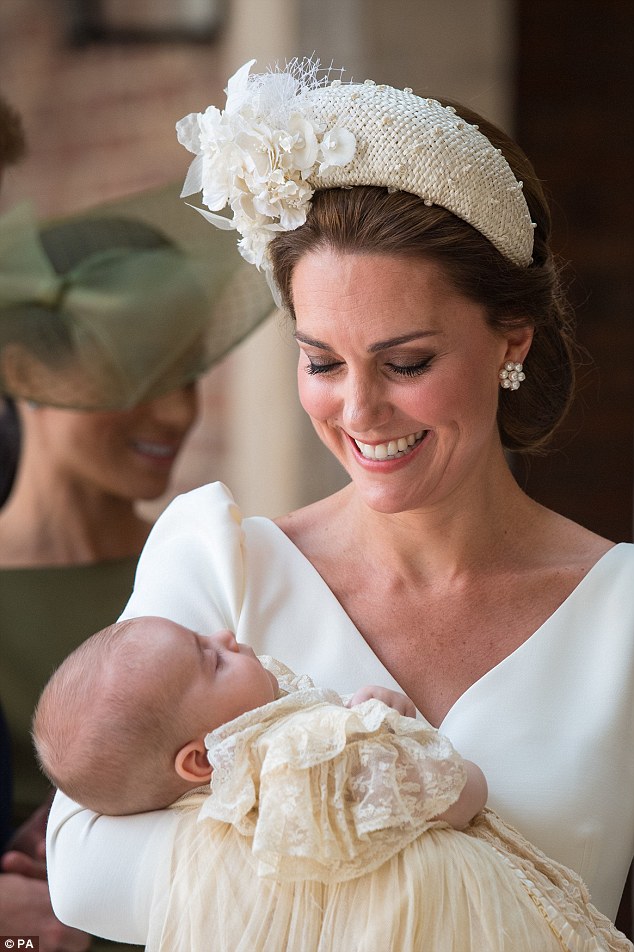 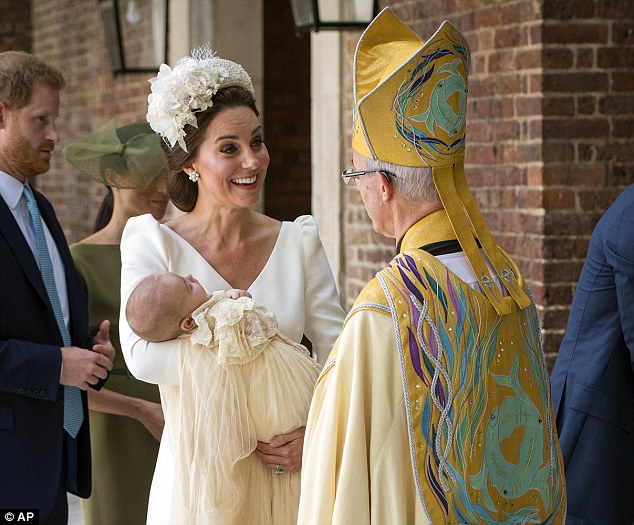 The beaming Duchess cradled Prince Louis in her arms as she carried him home following his christening on Monday afternoon.

Proud mother Kate, 36, gazed adoringly at her 11-week-old son as she left intimate service at Chapel Royal at St James’s Palace, London, alongside a select group of family and close friends.

By her side was her husband the Duke of Cambridge, 36, who held hands with their oldest children Prince George, four, and Princess Charlotte, three, as they made their first public appearance as a family-of-five. 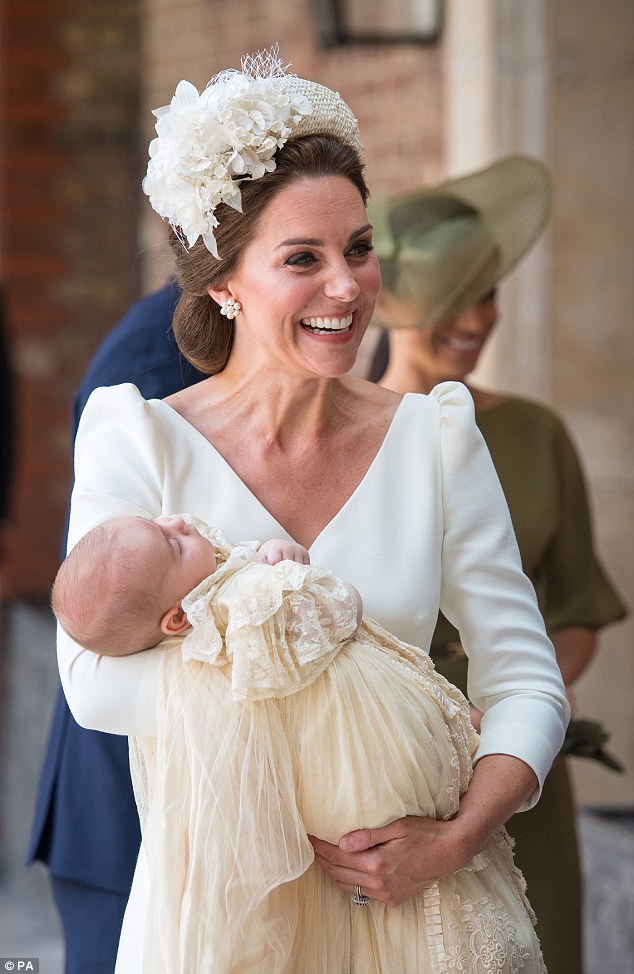 The family led guests including the Duke and Duchess of Sussex from the chapel and to Clarence House, where they will host a private afternoon tea.

Also present were Prince Louis’ six godparents and family members including Prince Charles and the Duchess of Cornwall, Michael and Carole Middleton, and James and Pippa Matthews.

Notably absent were the Queen, 92, and the Duke of Edinburgh, 97, who were forced to miss their great-grandson’s christening due to a packed royal schedule.

WHO ARE PRINCE LOUIS’ GODPARENTS?

Lady Laura Meade is the wife of James Meade, another Old Etonian and fast friend of Wills’, who was asked to make a speech at the royal wedding and is godfather to Louis’ big sister, Princess Charlotte.

William was again asked to be an usher when Laura and James tied the knot in 2013, and Kate, Prince Harry and Kate’s younger sister Pippa were all among the congregation.

Laura, from Norfolk, is the daughter of the Earl and Countess of Romney, and she and her siblings are close to the Middletons as well as the Prince.

Before they married and settled down, Kate and William and Laura and James were regulars at the Cuckoo Club in Piccadilly.

Prince Louis’ godfather Harry Aubrey-Fletcher is one of William’s oldest friends, having attended both Ludgrove prep school and Eton with the Prince.

Kate joined William at Harry’s wedding to Louise Stourton in January 2011, just four months before the Duke and Duchess of Cambridge’s own nuptials.

Prince William was an usher at the ceremony, held at Aldborough Parish Church in Boroughbridge, West Yorkshire.

Major Nicholas van Cutsem has been firm friends of the Prince of Wales and his sons for years.

His daughter, Grace, stole the show at the 2011 Royal wedding when she covered her ears on the balcony of Buckingham Palace.

Nicholas serves with the Household Cavalry and led the escort accompanying the Prince’s Royal Wedding carriage.

He is married to Alice van Cutsem, with the pair wedded in 2009.

Mr Pelly has been in part of Harry and William’s inner circle since their teenage years.

He is known for running celebrity nightclub, Tonteria, in Chelsea, South-West London, a favourite old haunt of Harry during his partying years.

The entrepreneur has also been involved with Mahiki, Whisky Mist and Public over the years.

Bristol graduate Lucy, 32, is the Duchess of Cambridge’s cousin and works as a solicitor in London specialising in media litigation for Atkins Thomson.

She is said to be  close to the Duchess, and the pair spent their gap year together in Florence.

Lucy was studying Italian and Catherine to join her.

Hannah and Kate attended Marlborough College together, where they played on several of the same sports teams.

Kate’s sister Pippa was a couple of years below Kate at the same school and also played sports.